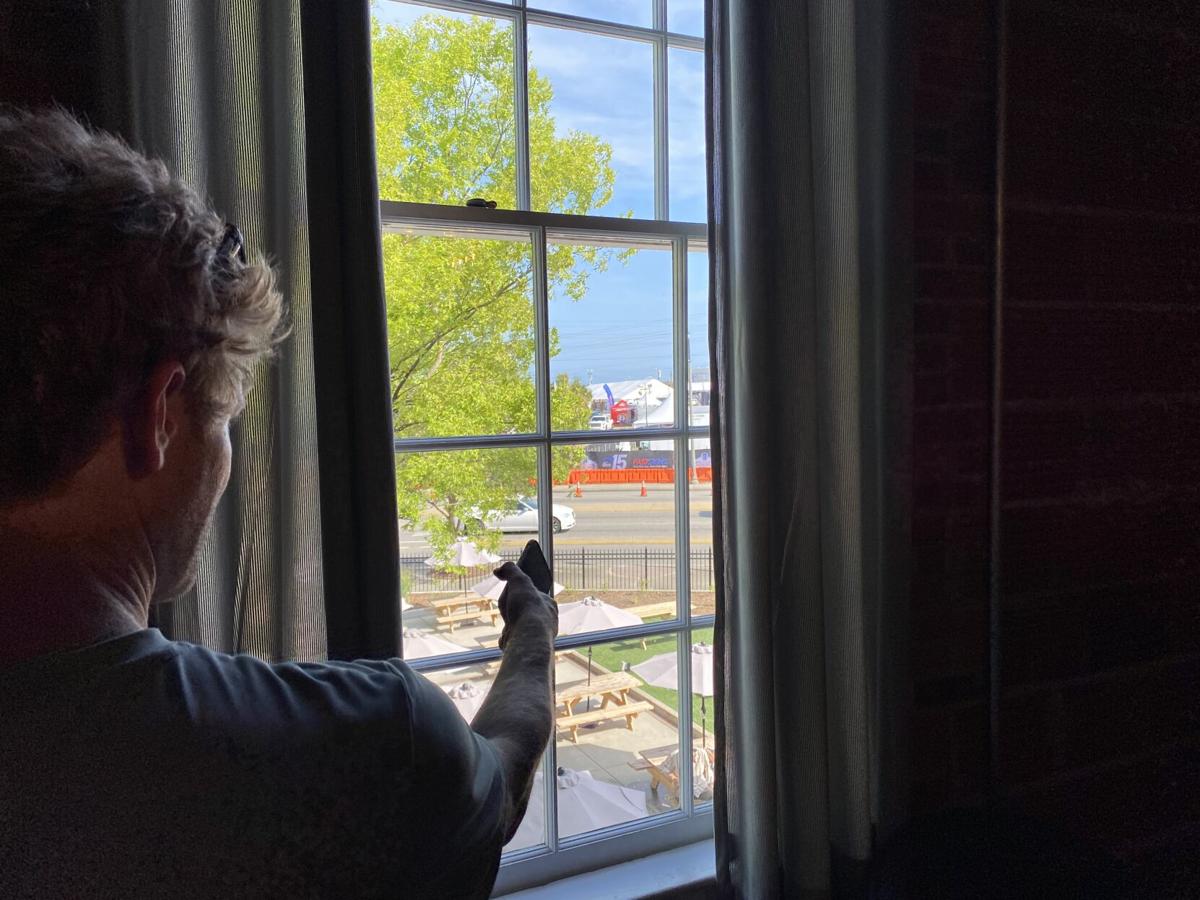 Clayton Burrous motions toward the main stage of the Carolina Country Music Festival in an apartment above Grand Strand Brewing Company. The apartment is one of two with premium views of the music festival's main stage. Jay Rodriguez/Staff 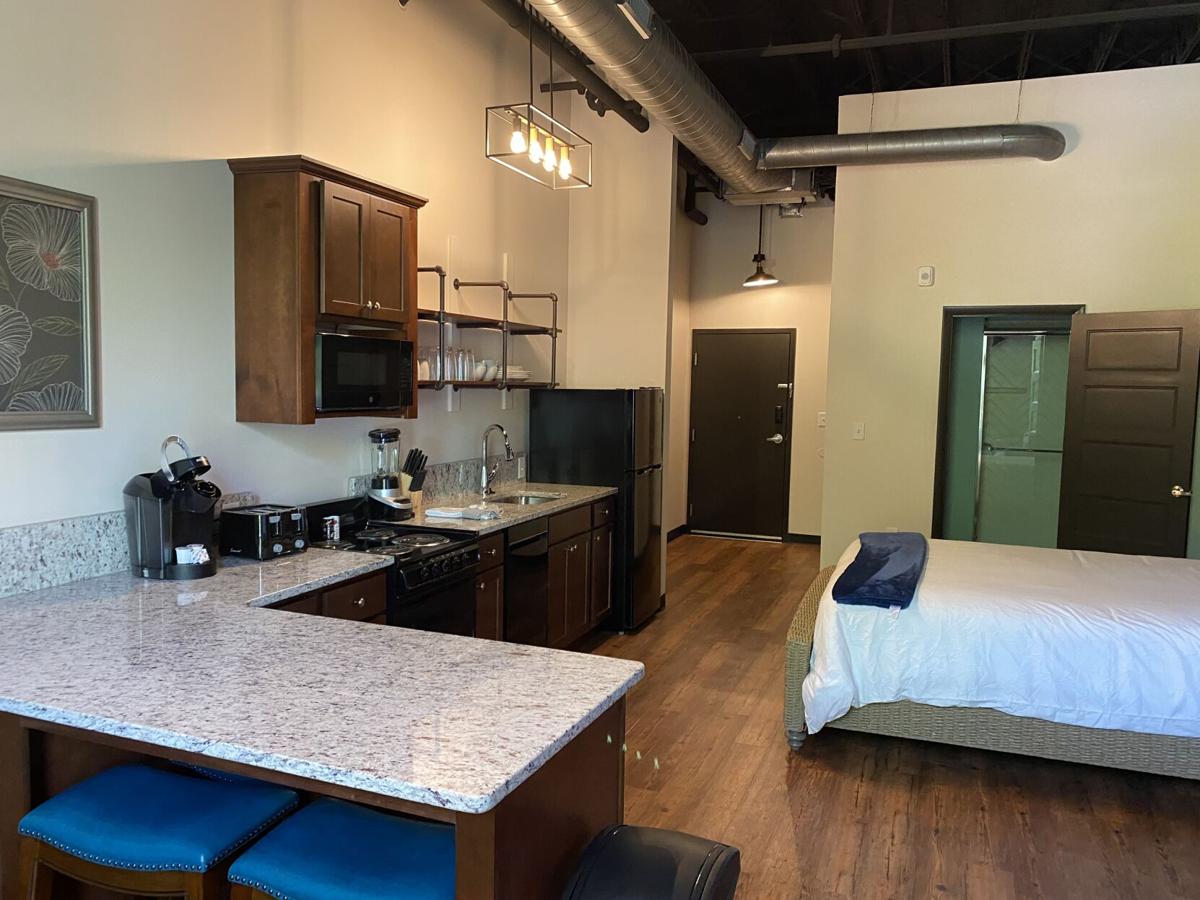 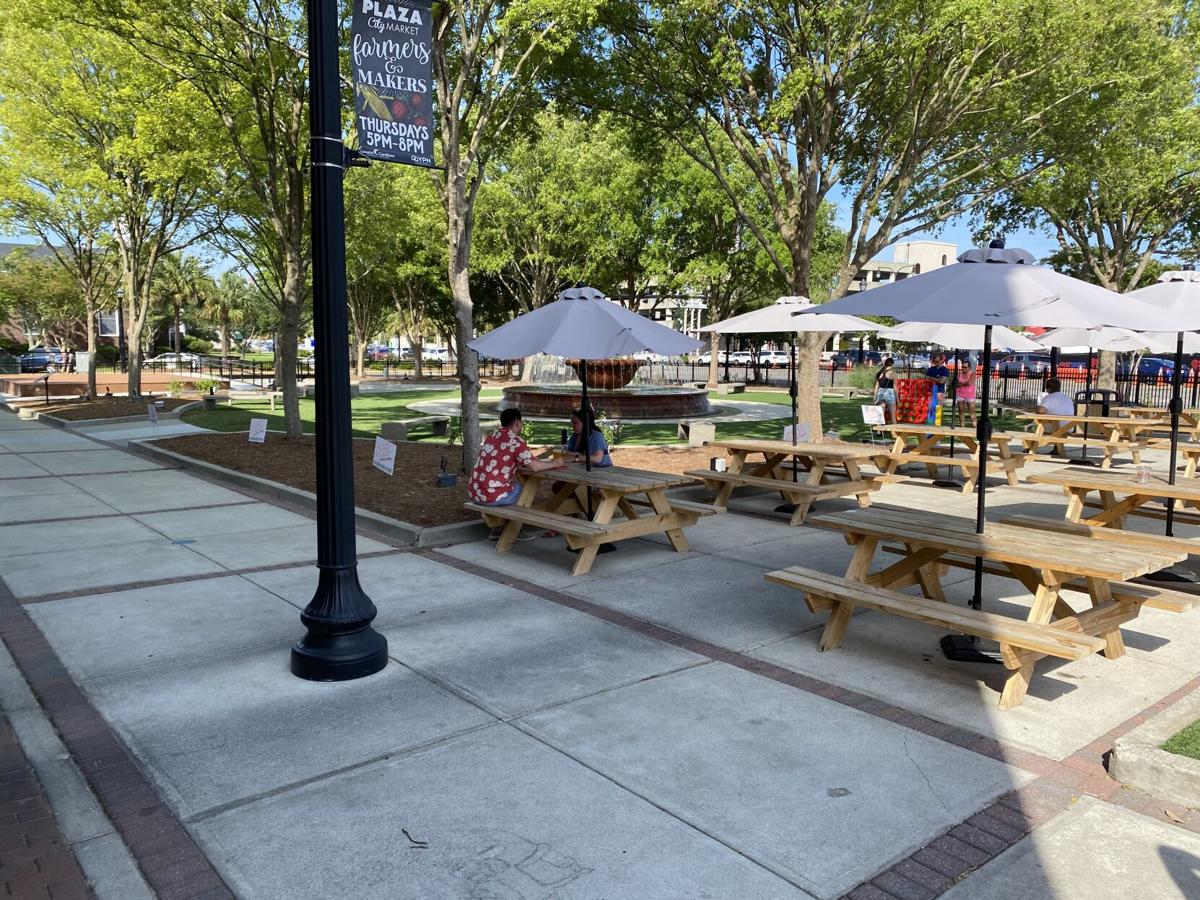 MYRTLE BEACH — Perched on the second floor of the Grand Strand Brewing Company in the downtown's revamped Nance Plaza sits the newest and driest seats of this year's Carolina Country Music Festival.

Two of the 10 apartments, as sold on AirBnb through a management company, face the main stage of CCMF, the largest gathering of tourists and locals in Myrtle Beach since COVID-19 restrictions were lifted.

The city has implemented the following traffic pattern restrictions around Burroughs & Chapin Pavilion Park during the Carolina Country Music Festival.

• One lane of westbound 8th Avenue North and the parking spaces will be closed starting Tuesday.

• Eighth Avenue North and Ocean Boulevard will be closed on Wednesday.

• Eastbound Ninth Avenue North will be closed on Wednesday.

• Parking for CCMF, ticket issues and Ground Zero will be placed behind the parking garage on 10th Avenue North.

• Overflow parking is at the former Myrtle Square Mall site across from the Convention Center. Shuttle buses will drop off on Chester Street by the Parking Garage.

New to this year's fest, just not within the Burroughs & Chapin Pavilion Park site at Ninth Avenue North and Kings Highway, is the start of the city's attempt to revamp its downtown area. The apartments opened in February and this year will be the first time someone can rent the rooms.

"It's certainly the place to be if this event is special to you and you love country music," said Clayton Burrous, who is part of the ownership group that owns the brewery and apartments. "I'm not sure you could find a better spot to be than in those apartments this weekend."

Darius Rucker, Luke Combs, Eric Church and Kelsea Ballerini are just some of the big names in country music who will grace the main stage of the sold-out, six-year-old event happening June 10-13. The concert was cancelled in 2020 and wristband holders, or ticketholders, were granted access to this year's show, which will welcome upwards of 30,000 people.

Charlotte-based Southern Entertainment Group committed to the city to follow the health and safety protocols in place at the time of the concert. It teamed up with Tidelands Health to offer voluntary, on-site, no-cost COVID-19 tests and vaccinations throughout the week June 7-11.

"That’s a great idea and an opportunity for everyone to minimize their own health risks," said Mark Kruea, city spokesman.

Pre-COVID, the festival has boasted attendance reaching 30,000 people for the four-day event. Kruea said there was not a capacity designated by the city or organizers during the permitting process.

Karen Riordan, president and CEO of the Myrtle Beach Area Chamber of Commerce, said 2019 brought in a $15 million to $20 million impact, and the impact from this year won't be known until after the festival.

"We won't have the full numbers until after the festival, but we know that this is clearly a multimilion dollar weekend," Riordan said. "Of course as part of that estimate, it's not just what they paid for tickets, but it's their hotel accommodations, it's the shopping we hope they do, all the dining out that they'll do, and everything that they'll spend while they're here."

Kruea said as for this year versus previous years, attendance-wise, he thinks the city is pretty much back to normal across the board this summer, assuming the area continues the downward trend on COVID cases and does not see another spike.

"Our staff is accustomed to handling the spring and summer increase in visitors, traffic, maintenance... " he said.

City staff plans ahead for special event weekends like CCMF, and many of the expected challenges are ironed out during the permitting process.

"The staff does a great job of making the transition from one event to the next, providing what amounts to around-the-clock service for Memorial Day and Carolina Country Music Fest," Kruea said. "That service level continues throughout the summer. As you’ve seen, the police department has a number of traffic management plans that it can and does implement whenever needed throughout the year."

Burrous said Grand Strand Brewing will try to speed up its operations to accommodate the anticipated crowds, including serving six draught beers instead of its usual 12 beers, it will have three grab-and-go food menu items and more outdoor events in Nance Plaza.

"We either hope it's a place that people come to to maybe feel like they're part of the scene, if they're not going to the concert or maybe a refuge for people who need to take a break from the concert," Burrous said. "It's just as much fun to be part of the buzz. We've been watching them put up the tents and the stages for four or five days now. Each day there's a little more energy and a little more electricity in the air."