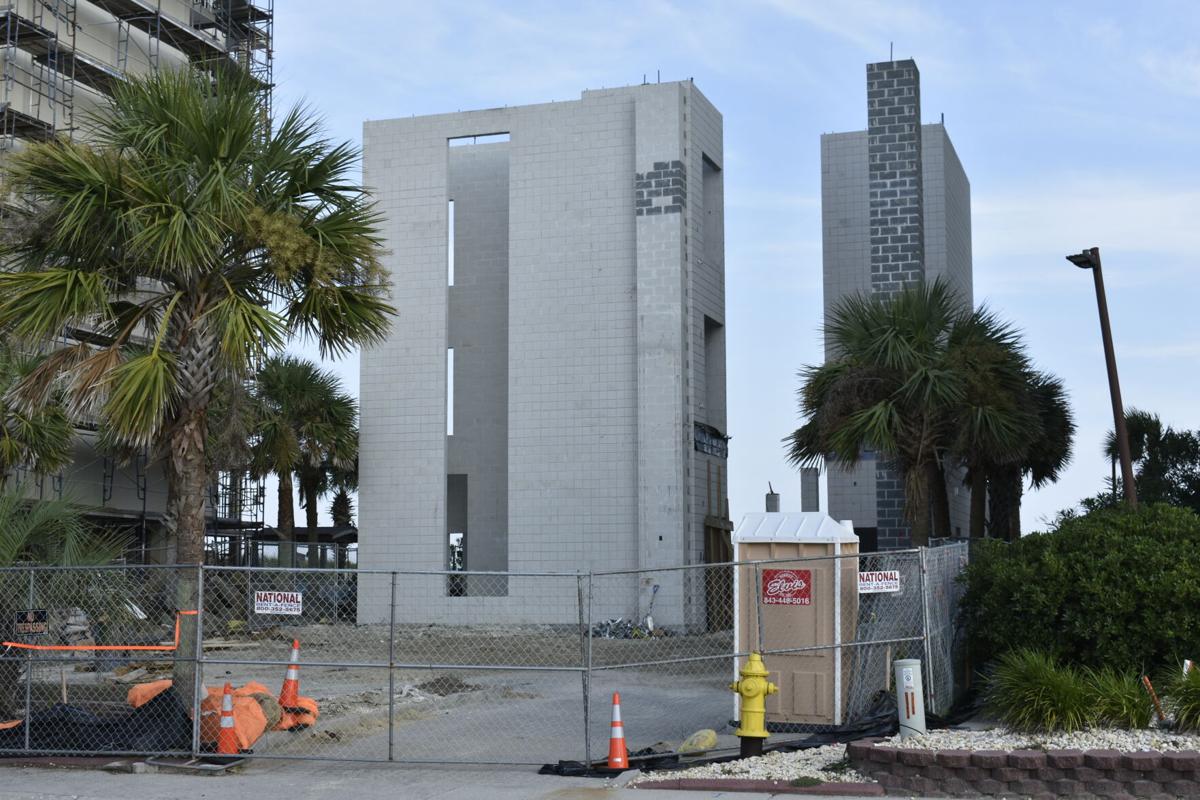 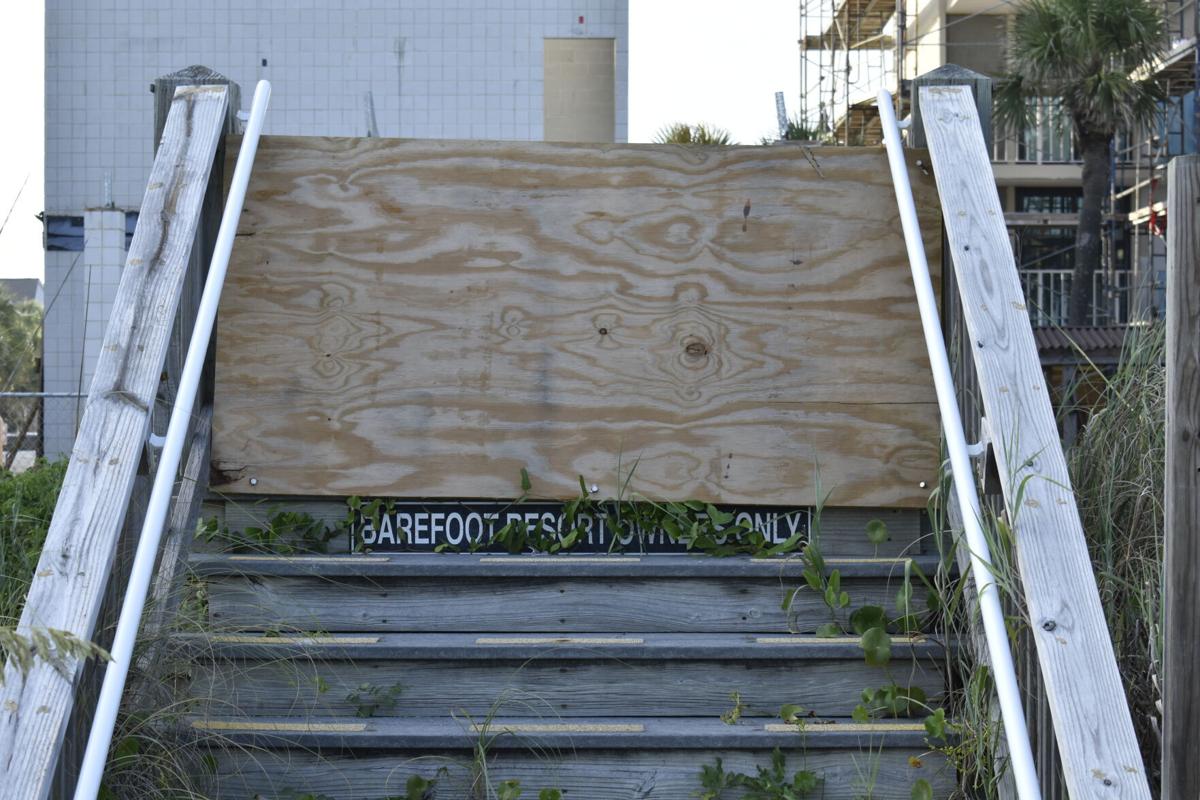 NORTH MYRTLE BEACH — The construction of a new beach cabana for Barefoot Resort and Golf has encountered a hurdle after it was discovered the wrong building materials were used for the oceanfront amenity center located in North Myrtle Beach.

The 19-page document states that “an investigation of the project has resulted in the discovery of numerous design and construction defects.”

In Aug. 2019, construction started on the budgeted $1.5 million new cabana with the demolition of the old one. In October 2019, the plans for the building were approved by the city of North Myrtle Beach and in November, the building permit was issued.

By Jan. 2020, the new pilings were completed, and visible progress of the structure started to take shape. However, a member of Ponderosa Management — an HOA management company in Barefoot — soon discovered that the building hangers and truss plates were galvanized instead of stainless steel or “Hot-Dip” galvanized which the plans had called for.

An attempt to rectify the situation was made by coating the installed materials. However, an engineer from Construction Science & Engineering was hired to visit the site and, in his opinion, “The materials installed at the project were improper and not suitable for a coastal environment.” He further stated, “the coating process being used by the contractor was not acceptable” and recommended that “all metal plate wood trusses should be removed and replaced with proper materials.”

The Barefoot HOA website said as a result, it “terminated its contracts with the general contractor and the architect.”

According to the lawsuit, experts have identified 13 different construction defects with what has been built so far.

A statement on the Barefoot Resort HOA website reads, “The board will move forward with construction of the cabana while the litigation is ongoing. It is our intention to recover all of the funds the board is required to spend about the original contract price of the cabana.”

Jerry Saxon, BRRA President, made a YouTube video for homeowners explaining the logic behind tearing down the old cabana and starting from scratch.

In 2004, the original builder for Barefoot Resort, Centex — unrelated to the suit — constructed a cabana at the present location that was built on the concrete slab of an old hotel. It was later discovered that the foundation pilings for the former hotel were not suitable. Standard pilings go down 25 to 35 feet whereas the site's foundation only had a depth of 5 to 6 feet.

According to the video, the original cabana was only built to residential code, and being a popular spot for homeowners and their quests, was being taxed.

Between 2012 and 2016, the stairs leading up to the second floor separated from the structure and began to sink, requiring numerous repairs. During the winter of 2015, a cold spell led to the water pipes in the building freezing. The video stated that rainstorms caused electrical problems requiring new circuit breaker boxes to be reinstalled.

According to the video, an elevator was not included in the original cabana, only a lift that was not designed for what it was used for. Many elderly homeowners were not able to take advantage of the amenity, plus medical gurneys did not fit in the lift.

In 2018, the board hired Becht Engineering to come in and inspect the structure and make a report of their findings. The firm said that it would cost around $100,000 to fix all of the problems and make the building safe.

“In that report, they found that there were a lot of structural issues, especially with the building not being built up to code,” Saxon said. He went on to say, “Between 2014 and 2018, it is estimated there were $80,000 in repairs that were made to the building.”

According to Saxon, a strategic planning committee was tasked with seeing what homeowners wanted most out of the cabana.

“The number one request was improving the cabana,” he said.

According to the video, the city of North Myrtle Beach was approached with “extensive renovation requirements in hand,” but required the building to be brought up to commercial code.

Saxon said that would have mandated the funding to come from HOA fees and an assessment to the homeowners, but the board was not in favor of that, so it was then decided to tear down and replace the structure.

The new cabana was funded with Barefoot Resort’s “1 percent Marketing Fund.” Homeowners who leave Barefoot pay one percent of their property’s sales price into a marketing fund. For example, a $130,000 sale produces $1,300 in funds.

According to BRRA Vice President Michael Atwood, the fund has reached almost as high as $5 million over time and the board uses it for various projects for the community. 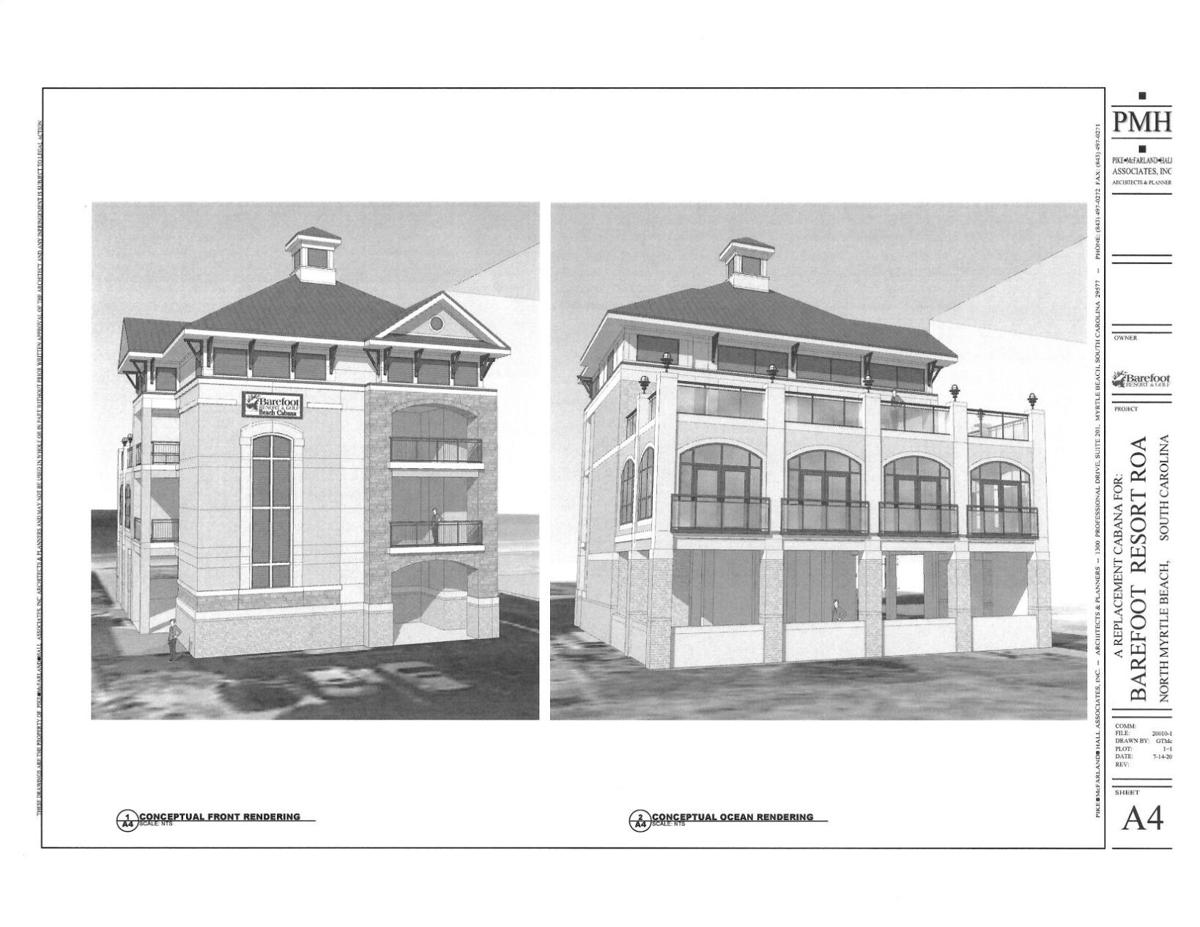 The BRRA signed an architectural contract with Pike, McFarland, Hall Associates and has a conceptual drawing in place.

There will be a new system in place during construction for the upcoming cabana according to Atwood.

“We are going to have more checks and balances,” he said. “Everything will be approved and signed off on. Nothing like before will happen again. We are trying to recoup our losses of where we are, so we can complete our building.”

Atwood believes that Barefoot as a whole will come out of this stronger as a community.

“The disappointing thing for me is to have seen us as a community go through this,” Atwood said. “Once we get it done — and we will — then all of that will be forgotten about.

“It is disappointing to me because it (the cabana) is something I love to use,” he said. “I love to go over there after I get off of work or take my family over there and get to enjoy being out at the beach.”

Atwood hopes the Barefoot community will be able to use the new amenity center by early next summer.

Richard Caines covers Courts in Horry and Georgetown County for the Post & Courier. He graduated from the Cronkite School at Arizona State University and is a huge Philadelphia sports fan.