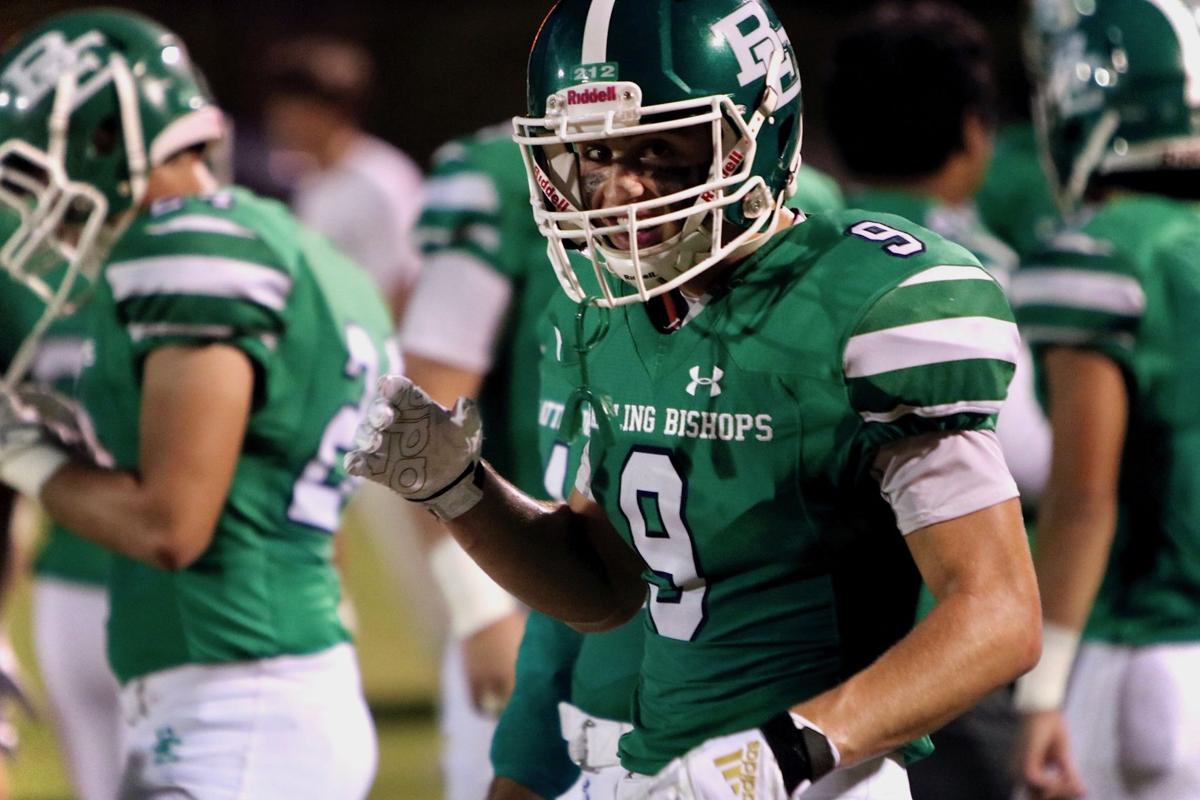 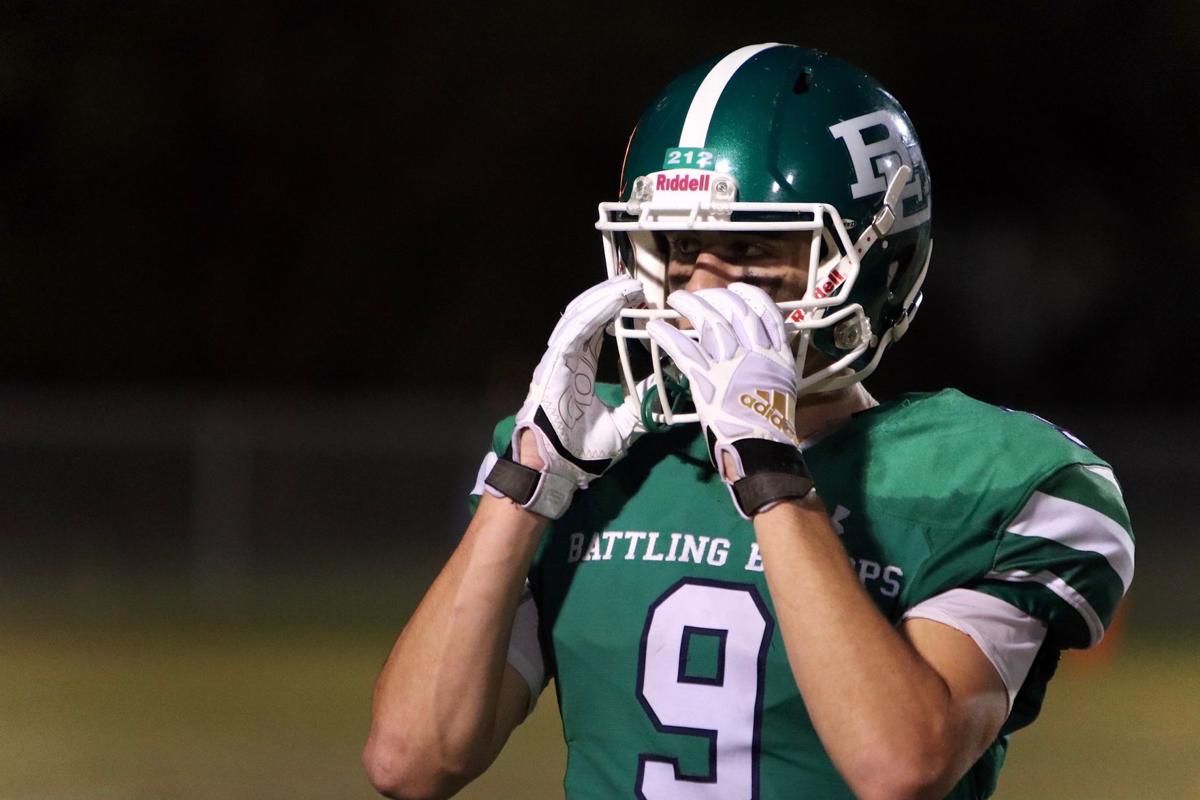 Eddie Marinaro isn’t getting as many touches as last season. That might make him even more dangerous.

Marinaro has been voted the South Atlantic Bank East Cooper Player of the Week for his two scores in Bishop England’s 35-3 win over Hanahan.

The junior receiver caught all five of his targets for 99 yards, including a 30-yard touchdown. He also ran in a 1-yard score and returned a kickoff 56 yards.

“He can do a lot of different things for us,” Bishop England coach John Cantey said. “He’s a playmaker whether he’s at running back or receiver. He’s going to help the team.”

Marinaro took over the starting quarterback spot for the Bishops on the fly a couple games into last season. He put together more than 1,200 total yards and 13 touchdowns, leading the team in yards and rushing attempts, learning as he went.

But the Bishops are best with both Marinaro and senior quarterback Cam Costa on the field together. So Marinaro, with a wider range of versatility, slid over to receiver a few weeks before the start of the season. His touches are down but he’s averaging 14 yards per catch. Teams can no longer key on him, knowing he’s taking the handoff. He’s become more unpredictable and now more often gashes defenses.

He had his best game of the season against Hanahan. He lifted the Bishops to an early 7-0 lead late in the first quarter with a 30-yard score. He beat the defense by at least 5 yards and trotted alone into the end zone.

Marinaro returned the opening kickoff of the second half back 56 yards to the Hanahan 38-yard line to set up the Bishops’ third score. He later punched in a 1-yard run that opened a 28-3 Bishops cushion with just over a minute to play in the third quarter.

“He’s an athletic kid that can do whatever he needs to do,” Cantey said. “He’s done a great job of taking advantage of his opportunities.”

Marinaro finished 38 votes ahead of Wando receiver Dillon McCarthy in fan voting this week. Oceanside’s Joey Boylston was third and First Baptist’s Will Daniel landed fourth. Marinaro is the first from Bishop England to be voted Player of the Week this season. Past weeks have highlighted players from Wando, Porter-Gaud, First Baptist and Philip Simmons.

Fans can cast their ballots at moultrienews.com/potw2019 each week to decide the best performance of the area’s local high school football games. Players from Academic Magnet, Bishop England, First Baptist, Oceanside, Palmetto Christian, Philip Simmons, Porter-Gaud and Wando will all be considered. Each week’s winners will earn an automatic bid into the South Atlantic Bank East Cooper Player of the Year contest at the end of the season.

Voting opens each Wednesday at 12 a.m. and will close the following Sunday at midnight. Fans who register and vote will be entered into a random drawing for a $25 gift card each week.

Green finished with 4.5 tackles in all, four of them solo efforts and three behind the line of scrimmage, to help limit Stratford to the fewest points scored against Wando in their past 20 games.

Bishop England senior receiver Sullivan Clair caught 11 passes for 107 yards and a touchdown in the Bishops’ 33-17 win at Waccamaw.

Clair pulled in a 12-yard score that lifted the Bishops’ ahead 30-10 midway through the third quarter. He caught all but two targets, averaging 9.7 yards per reception, and added three tackles on defense.

Oceanside senior running back Keegan Williams put together 211 all-purpose yards in the Landsharks’ 42-0 win at Burke.

Williams ran for 147 yards and two scores on just 10 carries, with touchdowns of 44 and 36 yards. He caught two passes for 34 yards, one of them a pop pass he took 30 yards to the end zone. He also returned a kickoff 30 yards.

First Baptist eighth-grade running back Davian Brown ran for a career-high 161 yards and three touchdowns in the Hurricanes’ 68-13 win over Pinewood Prep.

Brown averaged 10.1 yards per carry. He scored twice from 1 yard out and ran in a third score for 30 yards away. He also had a tackle for a loss on defense.

Philip Simmons senior running back Solly Bess ran for a season-high 116 yards and two scores in the Iron Horses’ 40-18 win at North Charleston.

Bess averaged 6.8 yards per carry, scoring from 22 and 11 yards out in his first multi-score game of the season.

How the unpredictable transfer process has shaped Myron Wigfall

Myron Wigfall has moments of regret.

First Baptist's Brown becomes youngest Player of the Week ever

First Baptist’s Brown becomes youngest Player of the Week ever

Porter-Gaud to host Football Night in Charleston on Friday

Porter-Gaud is hosting Football Night in Charleston during its varsity football game against Augusta Christian on Friday.

John Cantey didn’t want to be the story.

High school football statistical leaders in the East Cooper coverage area through Week 7 of the 2019 season.

Tobias Lafayette immediately stood out to Brad Bowles this summer.