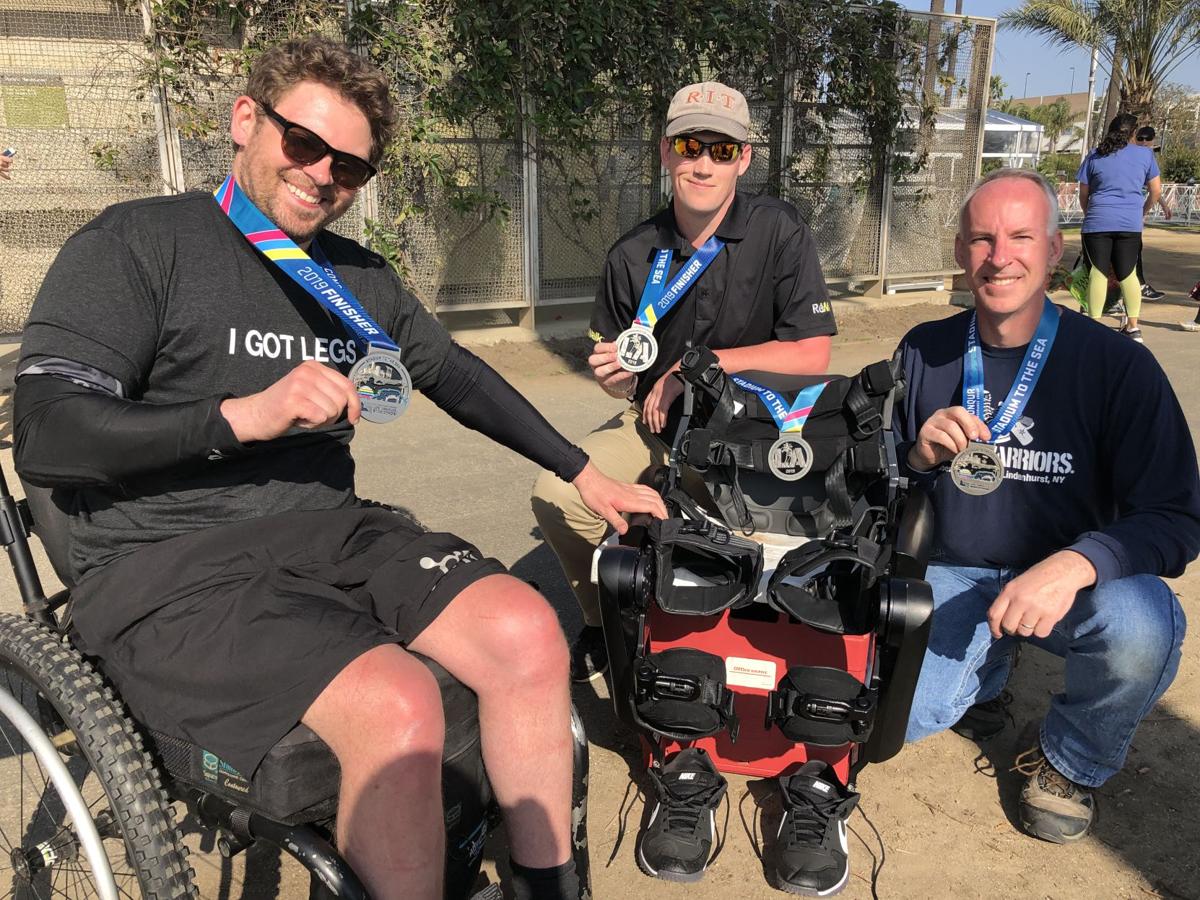 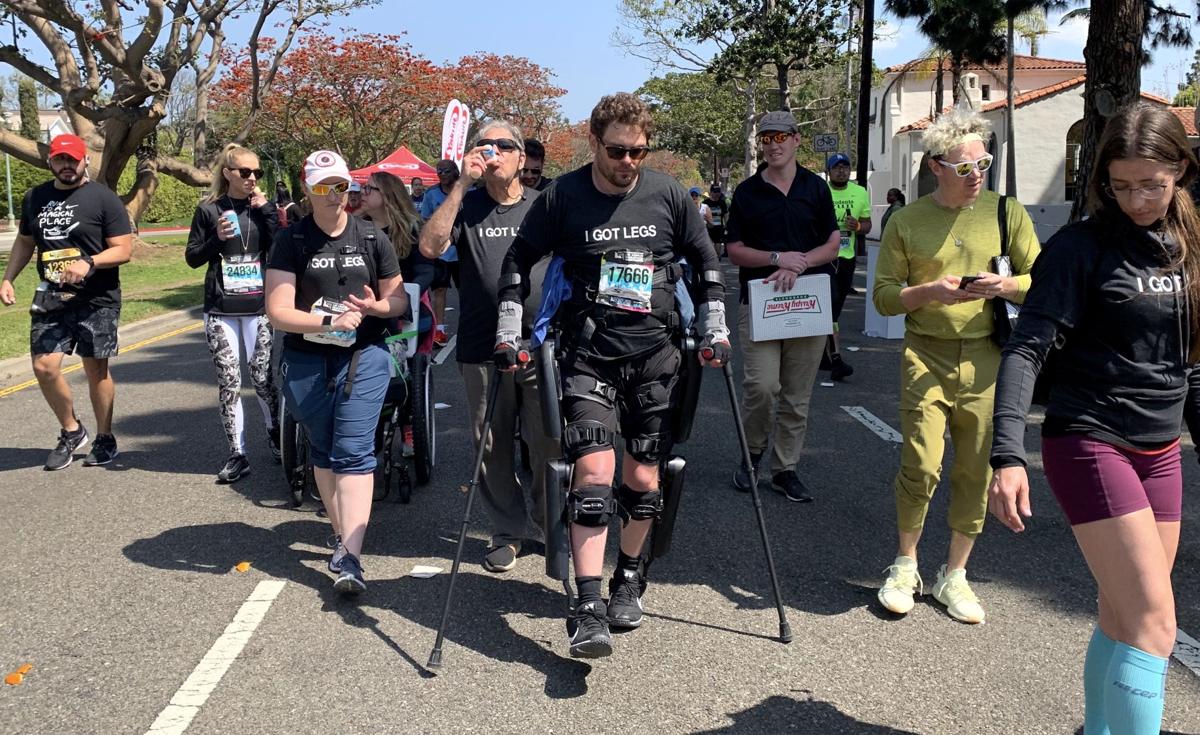 Gorlitsky and his team maneuver through the Los Angeles Marathon last Sunday. 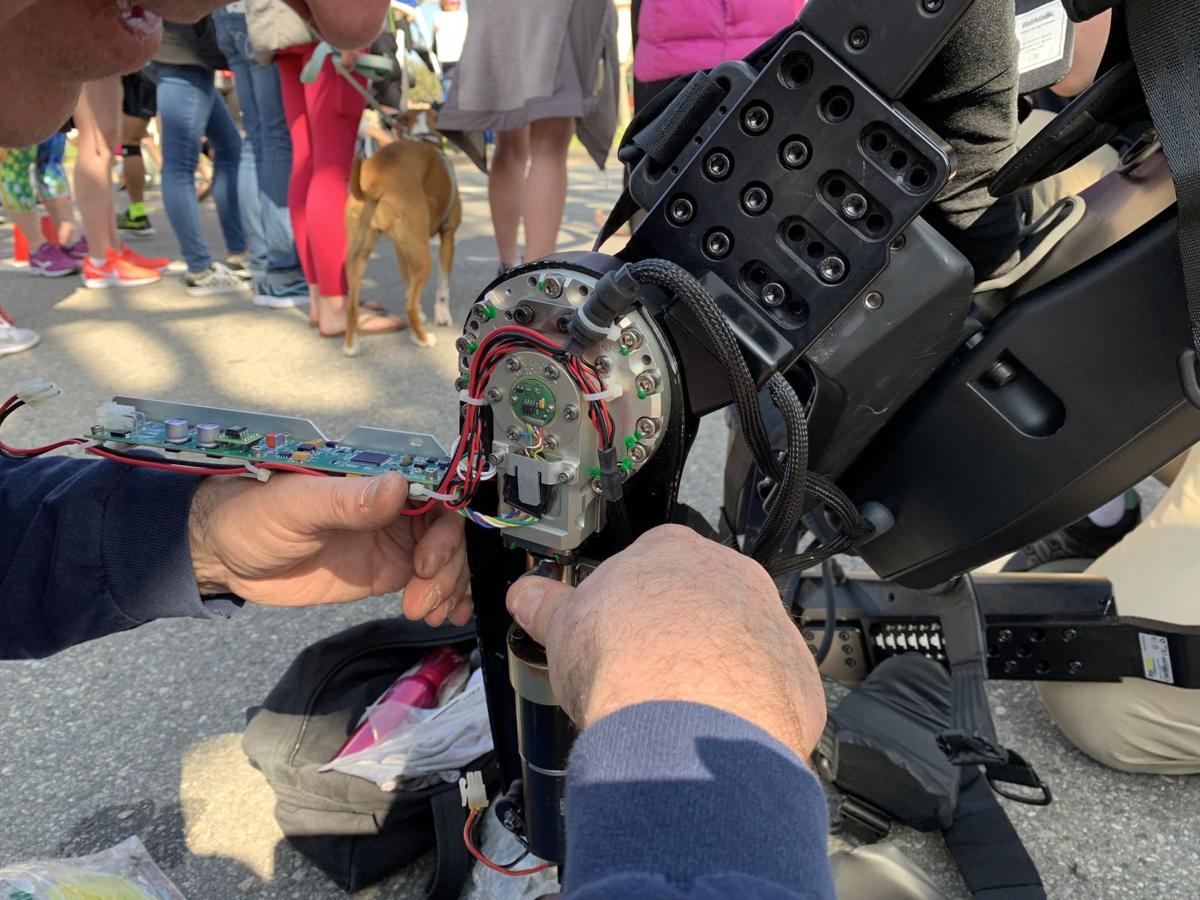 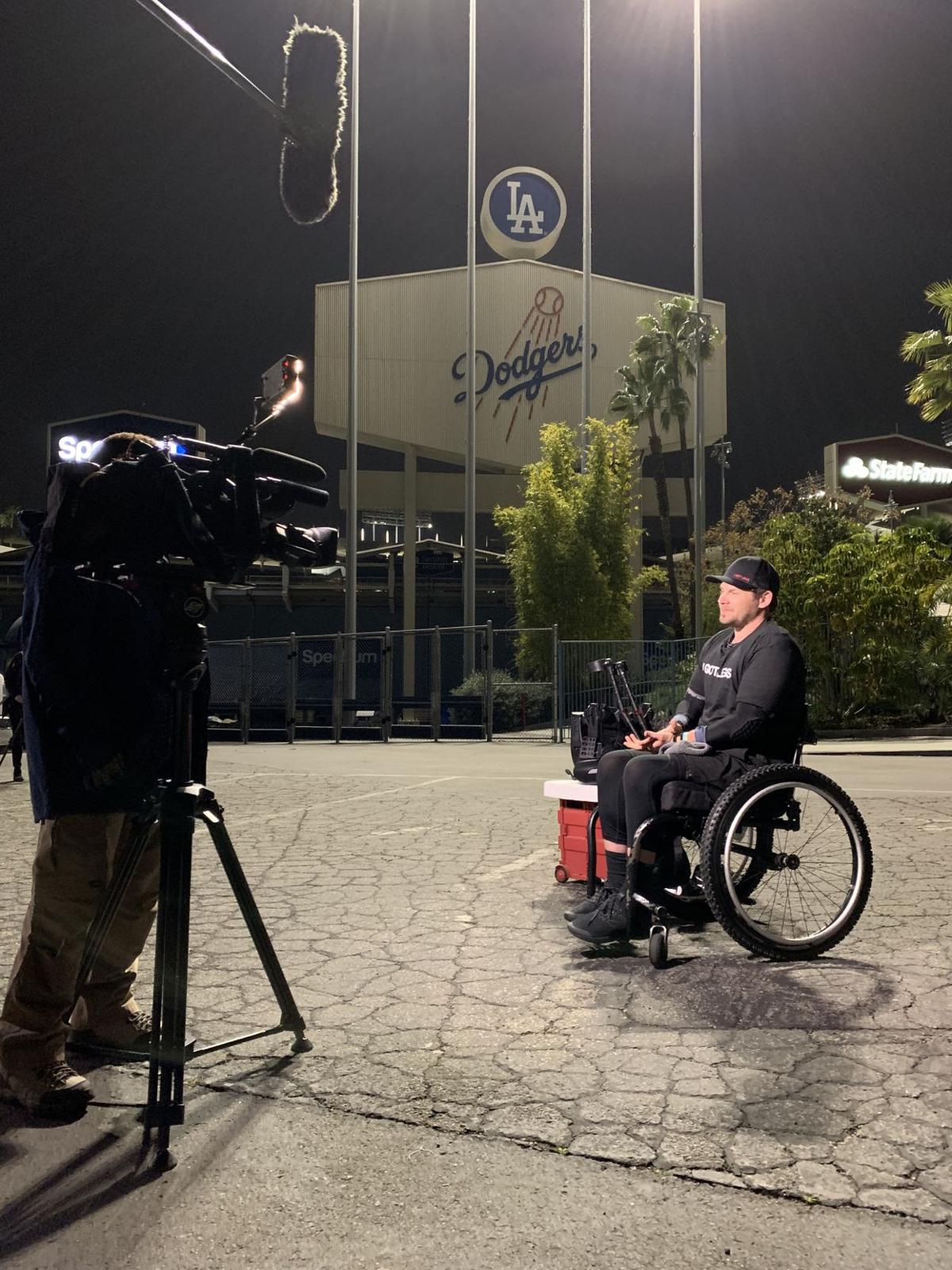 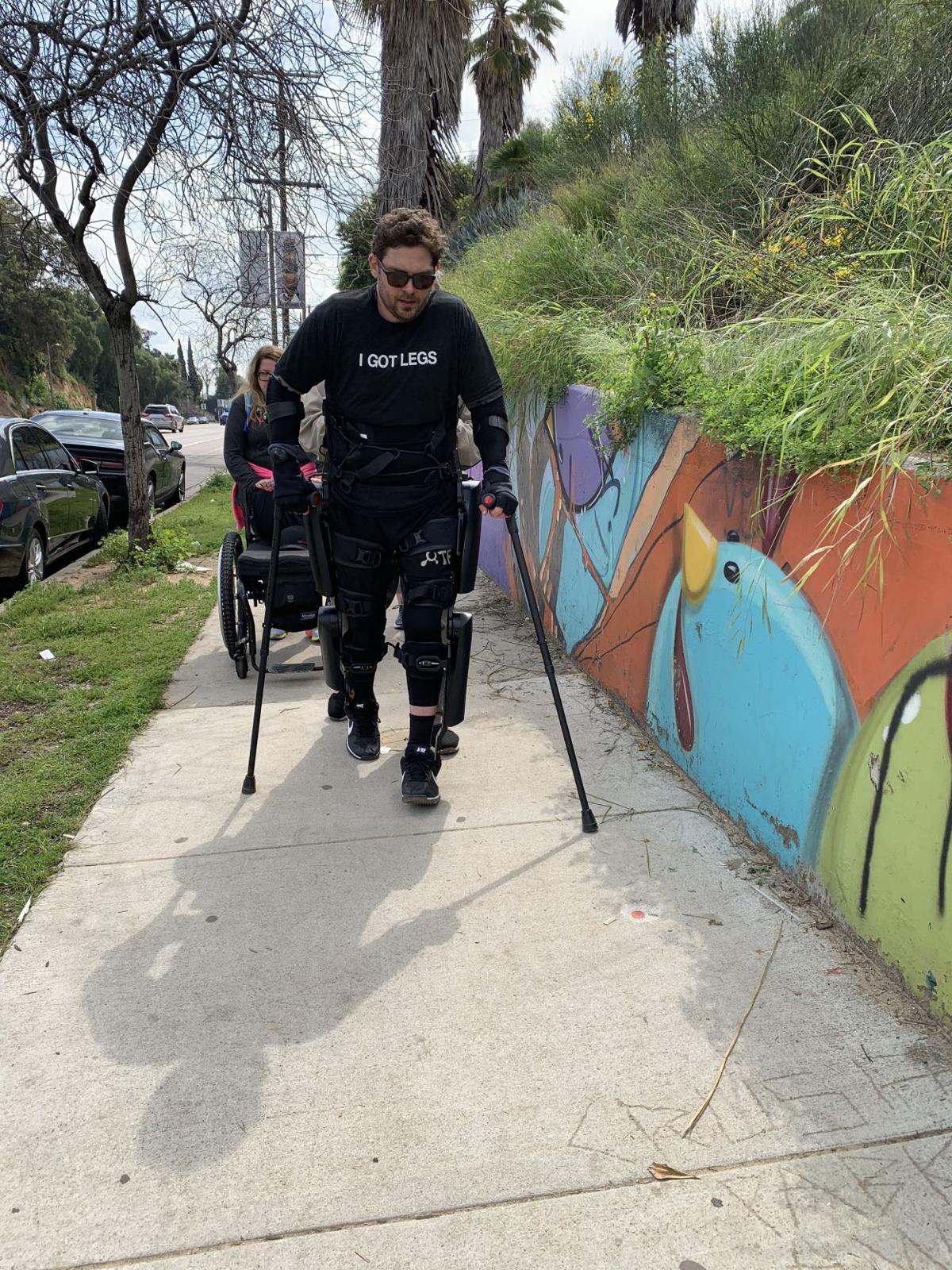 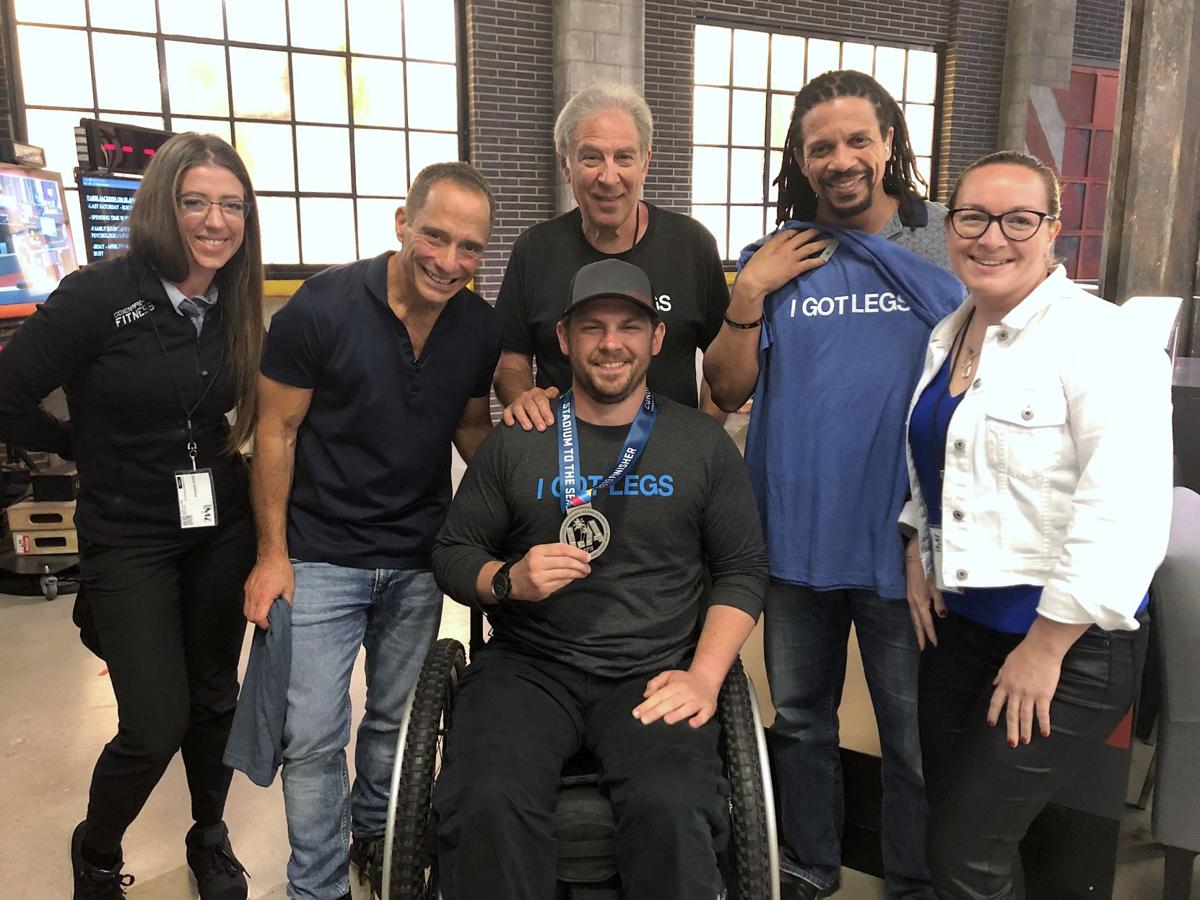 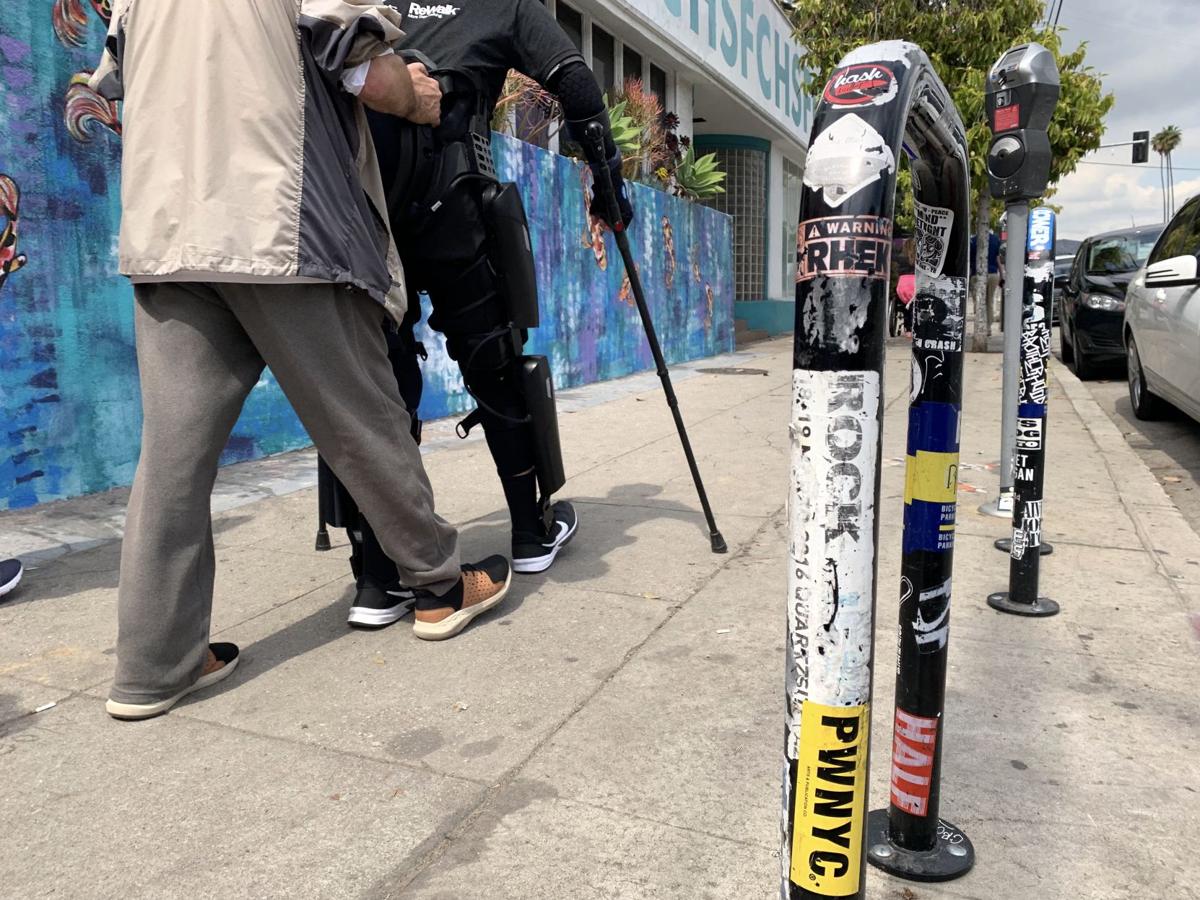 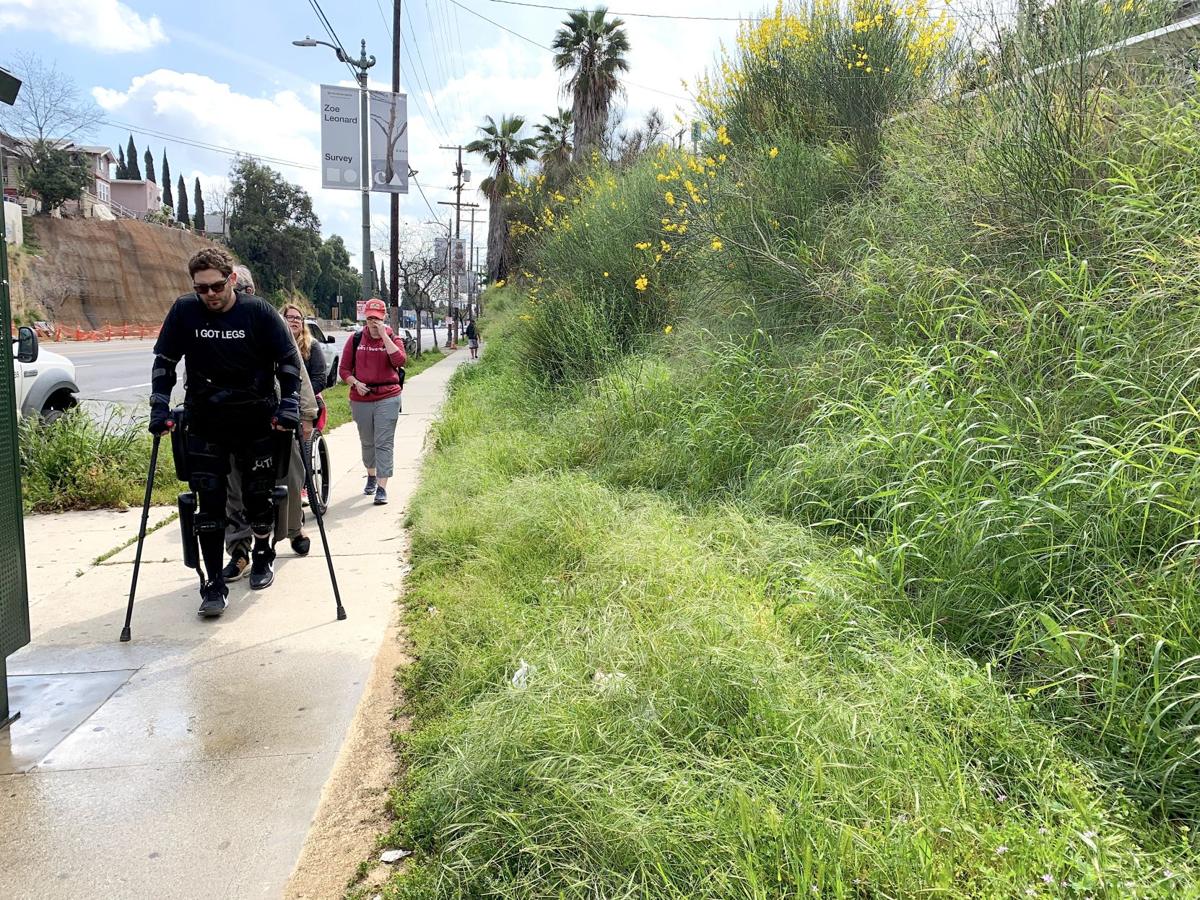 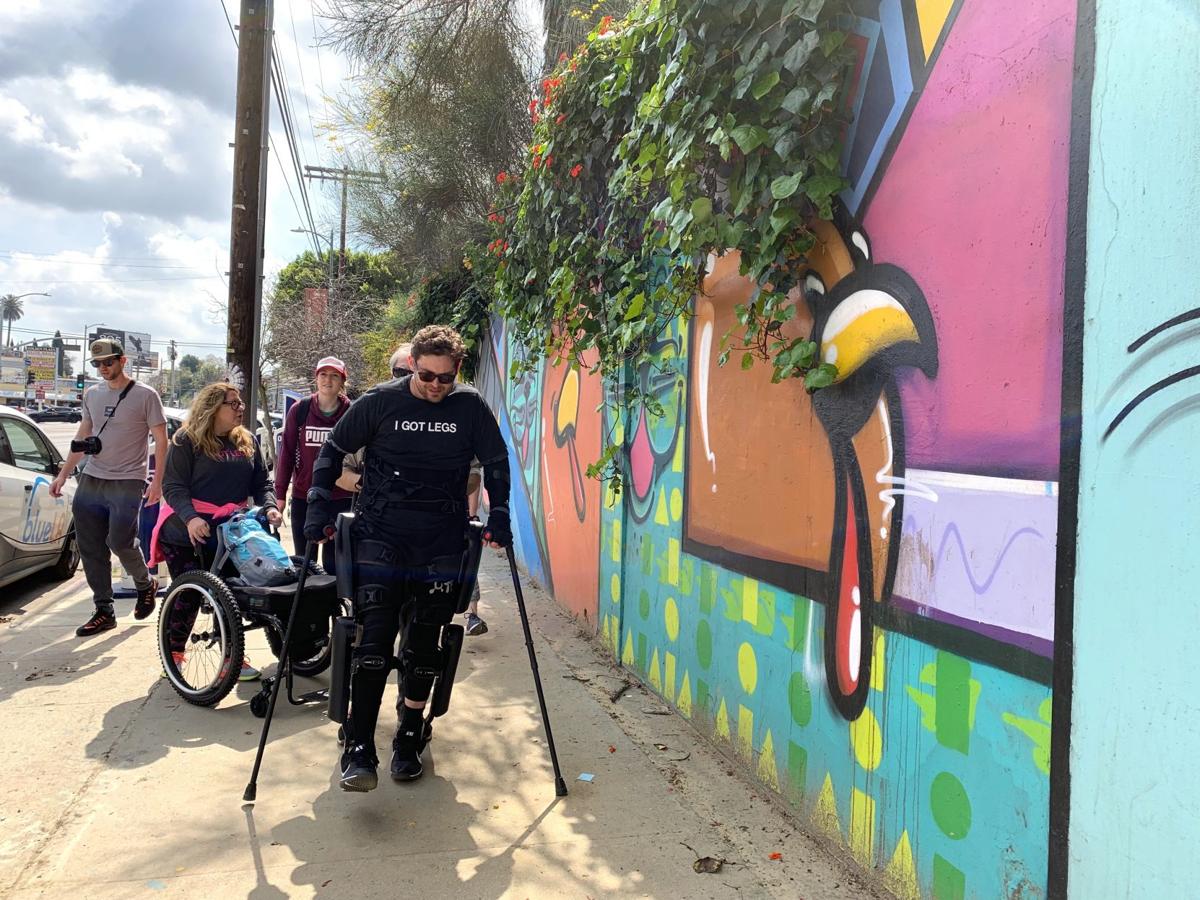 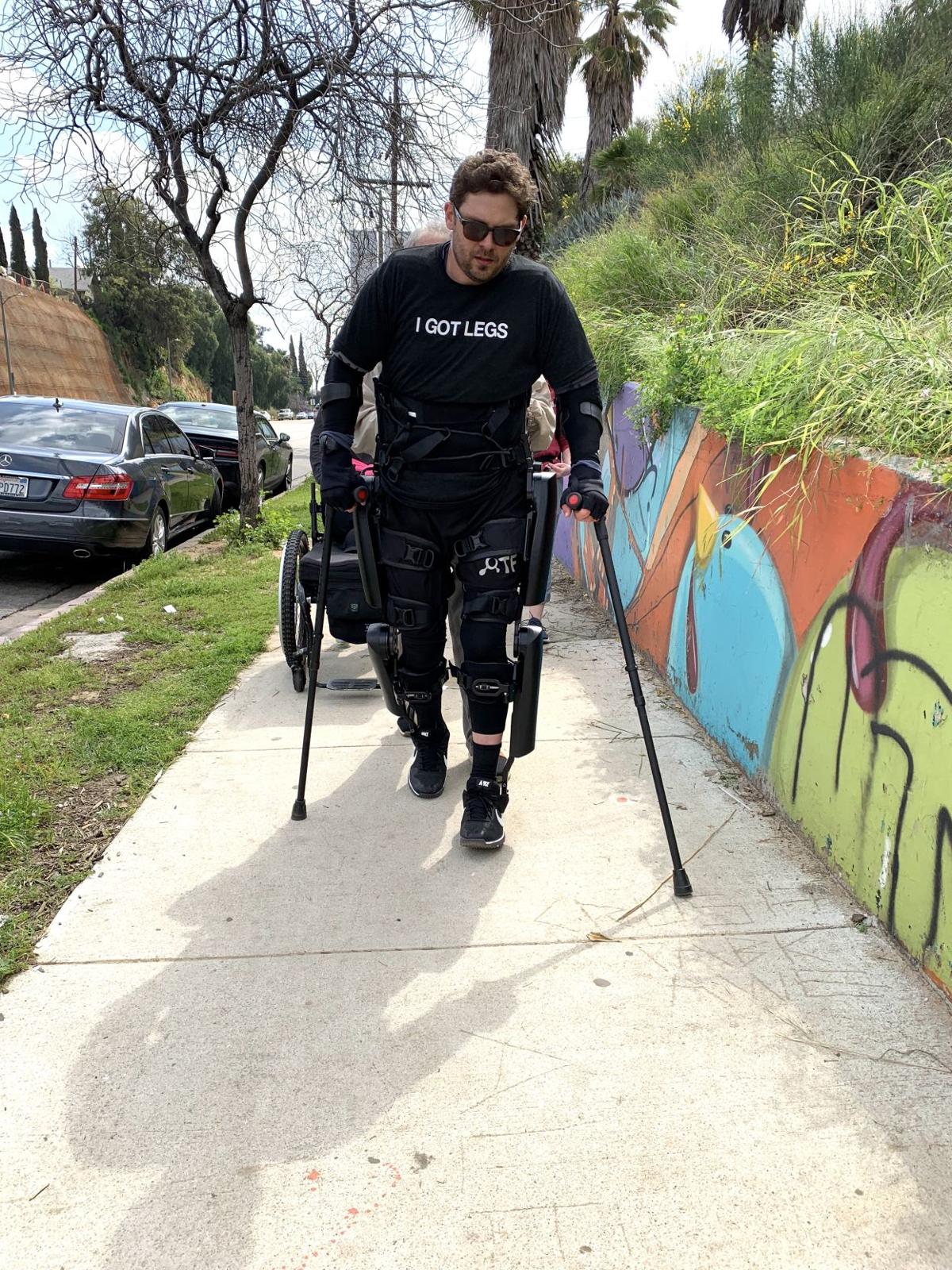 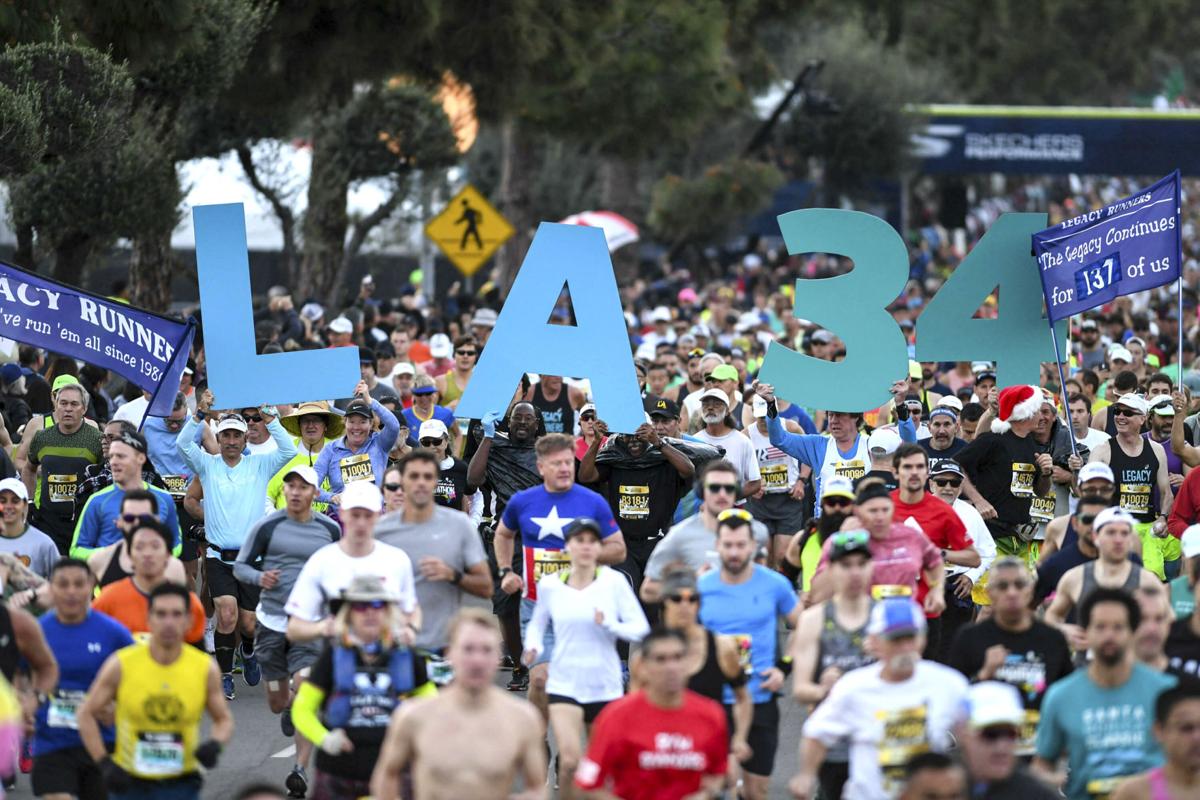 t wasn’t the blistered hands or the exhausted core muscles that hurt the most in the end. What bothered Adam Gorlitsky more than anything as he approached the finish line was a feeling of incompletion.

He’d set out to finish all 26.2 miles of the Los Angeles Marathon. His journey took him 17.2. It was still an incredibly impressive feat for a man who, paralyzed from the waist down the past 13 years, now relies on a robotic exoskeleton to walk. But the 32-year-old Mount Pleasant native quit accepting shortcomings long ago.

So despite the celebration ensuing around him, the cowbells that clamored, the people who cheered, the man who appeared beside him wearing a 3-foot sign that read “Super Man” with a red arrow pointing toward him, Gorlitsky was left feeling defeated.

“It should’ve been a great moment but really it was like, ‘God, I’m such a loser,” Gorlitsky admitted. “I really did feel like that.”

He struggled with that frustration in the hours that followed the longest race of his life. He couldn’t let it show with the cameras rolling and everyone celebrating. So he tucked it away somewhere inside, deep beneath the gold race medal that laid against his chest, and forced a tepid smile.

“I was just kind of disappointed in myself,” he said candidly. “And that was such a weird feeling at that time.”

Then he saw the newspaper headlines that labeled him a hero. He read the feedback online. He saw himself on TMZ and just about every news channel in his television’s lineup. They spoke glowingly of I Got Legs, the non-profit he established to help others reclaim their mobility. More than five dozen messages filled the inbox of his website in less than 24 hours. His story spread across social media, dotting the country and even further beyond.

It’s then he realized that he hadn’t failed at all. This was actually why he was here. He’d chosen Los Angeles because of Hollywood’s grand stage. His mission was to raise awareness of the I Got Legs initiative and re-walk technology. He was using the city’s visibility and its exposure to do so. The overwhelming response was proof that he’d accomplished that in spades. He realized what he initially perceived as ineptitude was actually wild success.

“All that positive energy just reminded me that all the stuff we’re doing does have a higher purpose,” Gorlitsky said. “It’s not about me. Everything that happened afterward, all of the support we received flipped my mindset. It might start with me and all this crazy stuff I’m trying to do. But at the end of the day, we’re only doing it for a higher purpose and our mission with I Got Legs. And we totally accomplished that.”

Gorlitsky began the Los Angeles Marathon a day earlier than the rest of the field, right at midnight on Friday at the official start line under the glow of nearby Dodger Stadium. A documentary film crew followed beside him. He passed under street scaffolding and in front of busy storefronts. He motored down the Hollywood Walk of Fame and through a television crew filming an episode of HBO’s The Deuce.

“It’s so surreal walking through Hollywood during the day. It felt like an alternate universe,” Gorlitsky said. “I’d mapped out the course on Google and thought it was a very doable course for me. I saw there were some hills but it still seemed manageable. We started walking and it was like ‘holy crap, this is one big up-and-down hill.’ It was brutal.”

Gorlitsky had conquered 34 road races over the past few years, famously including his hometown Cooper River Bridge Run and more recently the Portlandathon half marathon last October. But Los Angeles was to be the longest and toughest he’d ever attempted. The uneven terrain was especially difficult for him to maneuver through in his suit. The route followed endless hills, which tested his balance and taxed his core. The large ones were especially challenging but even the small ones were tough. He longed for any sort of straightaway that never really came.

Gorlitsky hadn’t slept the day prior. His adrenaline wouldn’t allow it. He admits he probably did a little too much media leading up to the race but says he felt obligated to oblige every request in order to deliver his message as wide as possible.

He thought he was properly nourished and hydrated but a nutritionist would later tell him he should’ve taken in about six times what he actually did. As his body tired, he began to apply more force through his hands and wrists into his support crutches. His triceps and shoulders throbbed in exhaustion. He could barely open his hands anymore. He began to dangerously doze off into mini naps while still continuing to push his legs forward one after the other. By mile marker 11, about 18 hours of walking, his body was trembling.

“My hands and wrists felt like they were going to snap off. I was shivering uncontrollably,” Gorlitsky remembers. “I said, ‘OK, I think I’m going to tap out for today and go try to sleep for a little while.’”

He returned at 7 a.m. on Sunday morning, the official day of the race. He began again at mile marker 20, which he’d convinced race officials in advance to label as the official start line for re-enabled athletes.

The finish line was 6.2 miles away. Roughly two miles into his restart, both of the hip motors on his exoskeleton burned out. He was already using a replacement exoskeleton; a shipping company rejected his personal machine upon its arrival in California. The alternate didn’t fit as well. His body already didn’t feel right. Now this.

“It was frustrating for sure,” he said. “I just wanted to finish so bad. I’d walked about 13 miles at that point. I was thinking, ‘Oh God, am I at least going to walk more than a half marathon?’”

Two re-walk technicians began quickly replacing the motors as Gorlitsky waited alongside. His anxiety grew as the time passed.

“It was like a legitimate NASCAR pit crew,” he said. “I knew I’d pushed my exoskeleton to the ultimate extreme with the hills and everything. The fact that it withstood everything to that point is a great testament to what an amazing piece of technology it really is. But no excuses. There was no way we were stopping there.”

The delay lasted a little more than an hour before Gorlitsky began again. He fell into a weird zone of focus as the end line came within reach. He doesn’t remember all the details from that final eight-hour portion. It gets blurry. People danced along Ocean Avenue as he paced by. Music blasted, but by then Gorlitsky was too locked in on reclaiming a sense of accomplishment.

“It did feel good to finish. I guess I just didn’t immediately realize what I’d done,” he said. “I was measuring it all in miles. But in terms of our effectiveness in growing I Got Legs, we definitely hit our mark.”

Several people have since contacted Gorlitsky about reclaiming their own mobility through re-walk technology. His I Got Legs non-profit is stable enough to help now. He hopes a couple might join him at the re-walk start line at next year’s race. Countless more have reached out for advice, motivation, or just to show their support.

He plans to tackle another marathon. This time maybe 10-15 pounds lighter with a better focus on balance and core strength in his training leading up to the event. He is certain he’ll return though and positive that completing a full 26.2-mile marathon is well within reach. He still shies away from the idea of a moral victory but maintains better perspective of it all now.

“Look, if I was just a paralyzed man walking the race, if that’s all I had, maybe I’d be kind of depressed with the fact that I didn’t walk all 26.2 miles,” Gorlitsky explained. “But I had to realize who I really am and what I Got Legs really is, what its purpose is. I have to keep our ultimate goal in perspective at the end of the day. We can actually help people.”