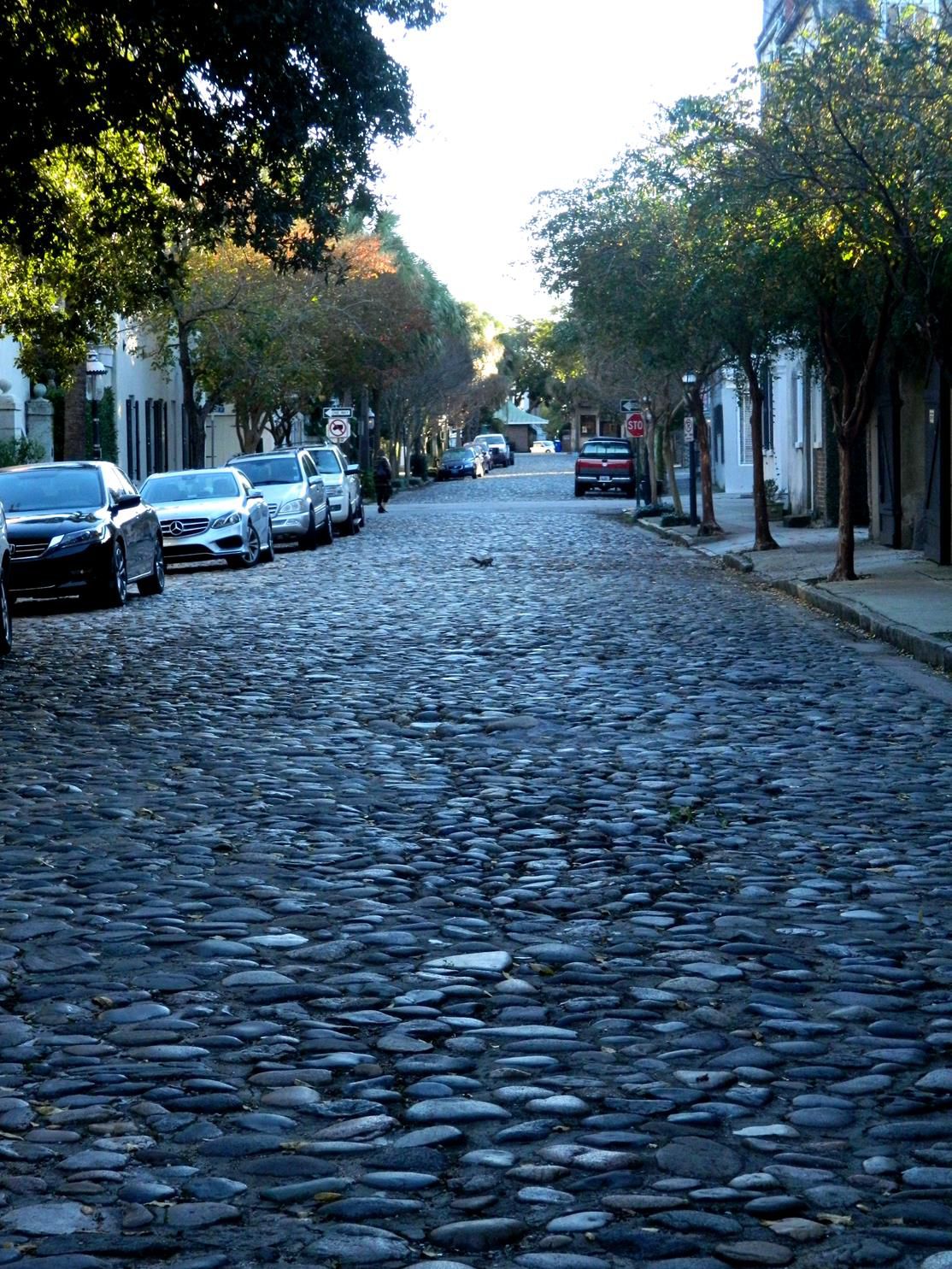 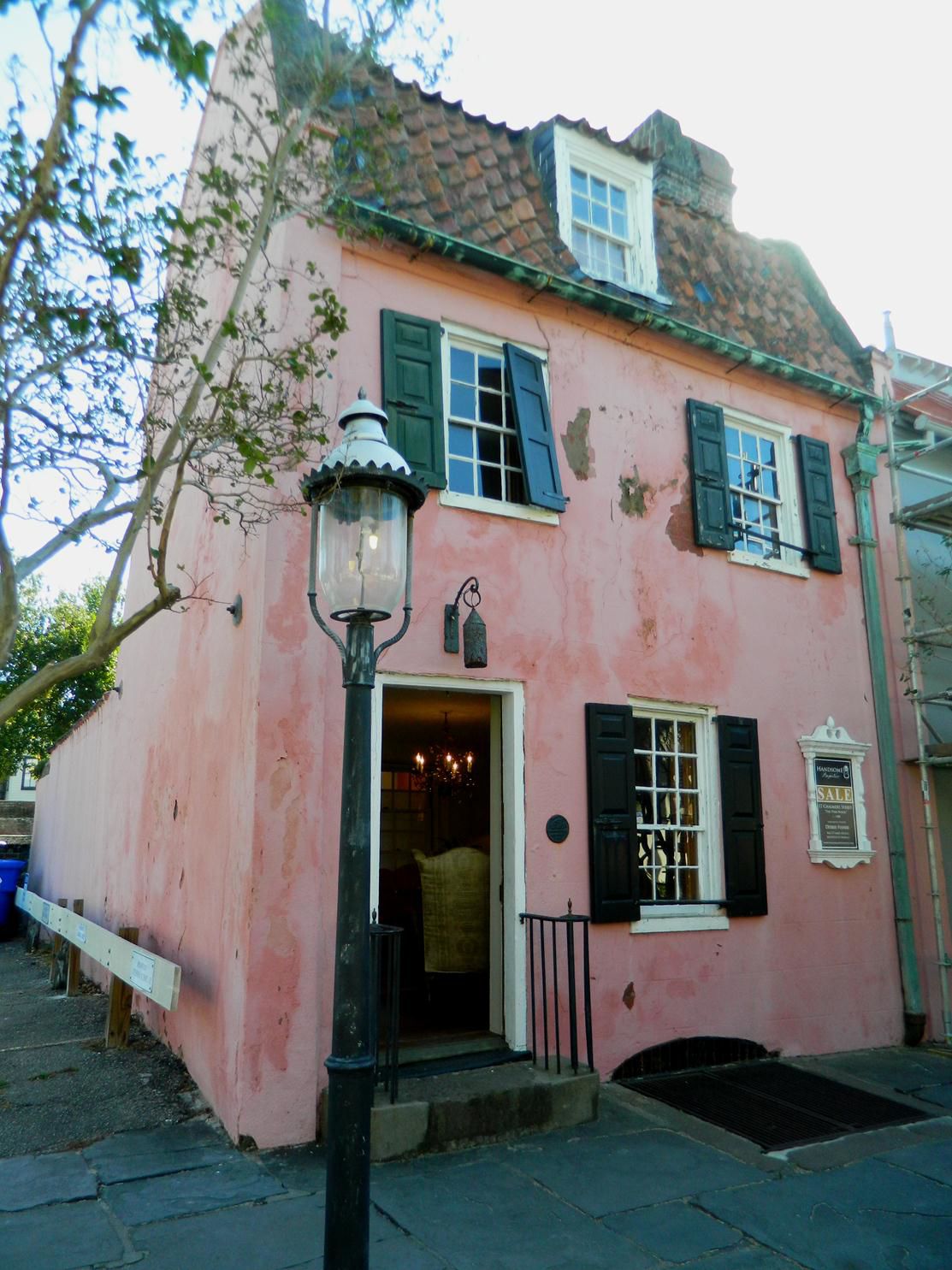 Only a few of the original cobblestone streets remain in Charleston but, at one time, a good portion of the old city was paved with these large, rounded stones. Cobblestones first found their way to the rockless Lowcountry in the 17th and 18th centuries as ballast in sailing ships from England, and later, the northeast. For a time they were simply thrown into the harbor as unnecessary waste, no longer needed when the ships left the harbor well-ballasted with cargoes of Carolina timber, rice and cotton.

Still, as anyone who is familiar with the peninsula knows, after a hard rain and a high tide, parts of Charleston go underwater. Such occurrences (and frequent ones, at that) turned the early dirt streets to mud. It didn't take long for the colonists to recognize a much-needed purpose for these stones — the laying of streets — and cobblestones (ahem) "paved" the way for the first hard-surfaced streets in Charleston.

Chalmers Street is probably the best known and, certainly, the most photographed of Charleston's cobblestone streets. It has been carefully preserved by the city simply because of its uniqueness. Without doubt, it is a "rocky road" and one story goes that the Charleston way to coax a recalcitrant, nine-month baby out into the world is to take the mother for a ride down Chalmers Street. Certainly, this bumpy ride would make a good advertisement for shock absorbers. A ride down Chalmers Street makes it easy to imagine just how much discomfort there was in the old days of wooden-wheeled, horse-drawn carriages. Still, it was better than mud.

Chalmers Street has gone through many changes (and names) throughout history. For a time the section running between Meeting and Church Street was known as Beresford's Alley, probably named for early 18th century colonist Richard Beresford. The same block was also known at one time as Mulatto Alley and became notorious for its many popular bordellos. The portion running from State to Church Street was once called Dennis Alley after Richard and Lawrence Dennis.

In 1801, the city attempted to bring some uniformity to the naming and numbering of Charleston streets and the entire street was widened and renamed Chalmers Alley for physician and meteorologist, Dr. Lionel Chalmers (1715-1777) whose home and apothecary had been at the northwest corner of Chalmers and State streets. He was a man of science and invention and, much in the same vein as his contemporary, Benjamin Franklin, was one of the first in America to set up a weather station, furnishing forecasts for the city.

Interestingly, another non-native "stone" used in early Charleston construction, Bermuda stone, is also seen on Chalmers Street at the Pink House, a charming two-story, one-room-wide building originally erected as a tavern in the late 1600s. Located at 17 Chalmers St., this building is thought to be the oldest tavern building in the South, built in the 1690s by John Breton. It was the site of Thomas Coker's tavern in the 1750s and, in this century, it has often been used as a gallery for artists, including Alice Ravenel Huger Smith.

Bermuda stone, also called West Indian coral stone, was a limestone-based building material cut from coral deposits in Bermuda and other islands, and thus had a pinkish cast. Also brought to Carolina as ballast in ships, its popular use in the early 1700s is one of the reasons why so many of the city's parking garages and modern city buildings are painted with a pinkish hue — an emulation of this early building material.

Another well-known cobblestoned street in Charleston is Adger's Wharf. Just south of Broad Street, running from East Bay to the harbor, this entire area was once devoted to the shipping industry, and docks and wharves literally lined the harbor front. An even earlier name for a dock or wharf was a "bridge," and the names given to these wharves and bridges changed with ownership. Originally known as Motte's Bridge when it was first erected in 1739 and, later, Magwood's Wharf (owned by the ancestors of the same Magwoods of Shem Creek fame), Adger's Wharf received its present name in the 19th century for merchant and shipping magnate James Adger II. Born in Ireland, Adger came to Charleston from New York in 1802, working first as a cotton buyer, then establishing a hardware business, James Adger & Co., in 1806. In 1818, he became the Charleston agent for Brown Brothers, world bankers, and established a factorage on the wharf that would carry his name. Adger also established the Adger Line, later known as the Clyde-Mallory Line. By the 1850s, Adger was one of the richest men in America.

The pride of his New York to Charleston steamship line was the James Adger, built in 1852 by New York shipbuilder William H. Webb. A sidewheel steamer, three-masted rigged schooner, the Adger was 215 feet long with a beam of 33 feet and weighed 1,151 tons. During the summer months when James Adger was in residence at his house in Moultrieville on Sullivan's Island, the vessel would fire its gun each time it entered or left the harbor. Adger would then acknowledge the salute by slipping the flag from the staff at his harbor front home.

It was fitting that when Adger died in 1858 in New York, his body was brought back to Charleston on the James Adger. What was not fitting, however, was that at the outbreak of hostilities in 1861, the ship happened to be in New York. It was seized by the Union and converted into a blockading warship with a battery of eight 32-pound guns. Ironically, this Charleston-based vessel was used throughout the war as a major support ship to the Federal fleet blockading Charleston.

Gillon Street, just to the north of the Exchange Building at the foot of Broad Street, also bears remnants of early cobblestoned paving. This street was named for Commodore Alexander Gillon, who became famous as the Commodore of the Navy of South Carolina during the Revolutionary War. Born in Rotterdam, his family being "one of the oldest and most wealthy of that commercial city," Gillon was in Charleston by 1766 where he formed a mercantile business. In 1778, he was elected Commodore of the Navy of South Carolina. In May 1782, he united with Spanish allies and with a fleet of 82 vessels under his flagship, the frigate South Carolina, succeeded in capturing the Bahamas from the British. In 1784, he was founder and first president of the Charleston Chamber of Commerce, which by the way, is the oldest Chamber of Commerce in America.

Cobblestone streets eventually gave way to more modern paving materials such as brick and wooden plank roads. Lower Church Street, from Water Street to the Battery, is (as far as I know) the only brick-paved street remaining in Charleston. It is charming to look at but almost as jarring a ride as the cobblestones of Chalmers Street.

Beginning in the late 1800s substantial improvements were made to standardize Charleston streets, including such things as regular house numbering and the installation of sidewalks. They also replaced the cobblestone streets with smoother surfaces and today, asphalt covers the old brick and cobblestones of earlier years. Still, as anyone who drives Charleston streets knows, a smooth ride is still a rarity in the old city. And flooding? No more need be said. Maintaining the streets is an ongoing, never-ending process. There's probably no permanent solution except for one of attitude. Think of it is as part of Charleston's "charm."