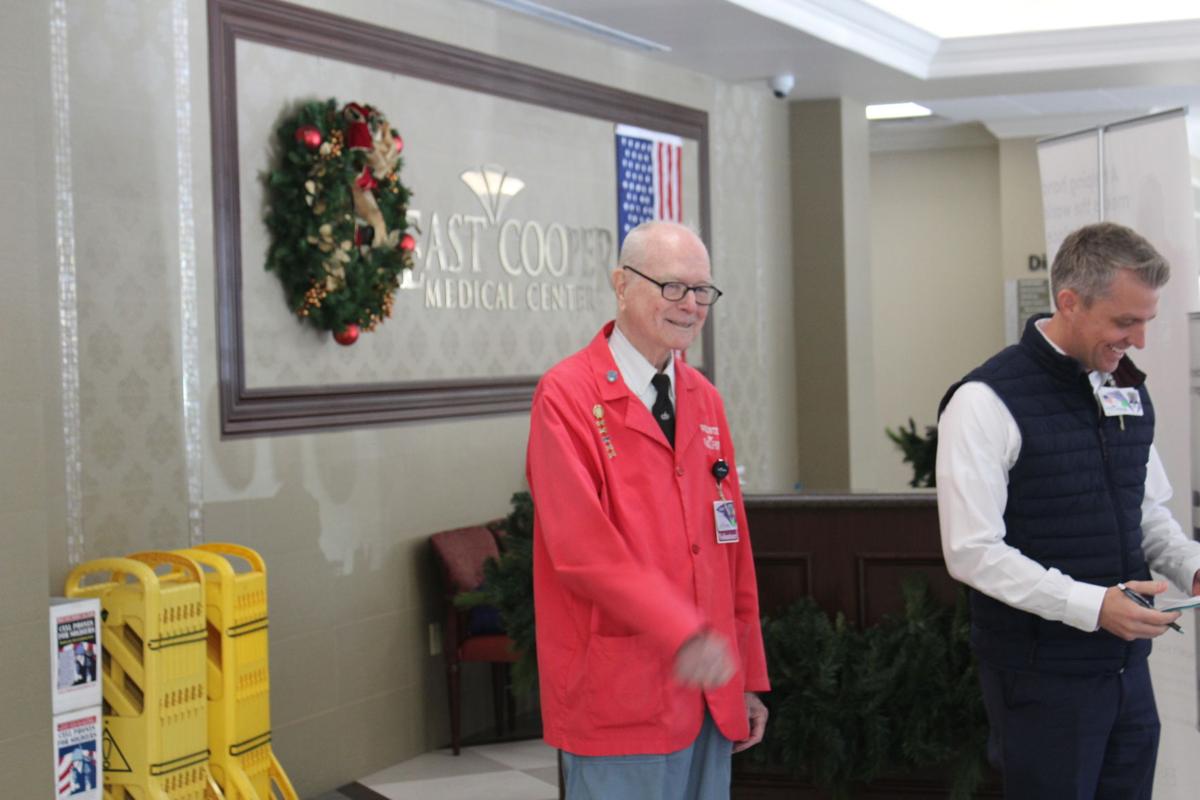 East Cooper Medical Center Voluntary Auxiliary member Jim Poore was recognized Dec. 18 for his 11 years and 7,000-plus hours of service. 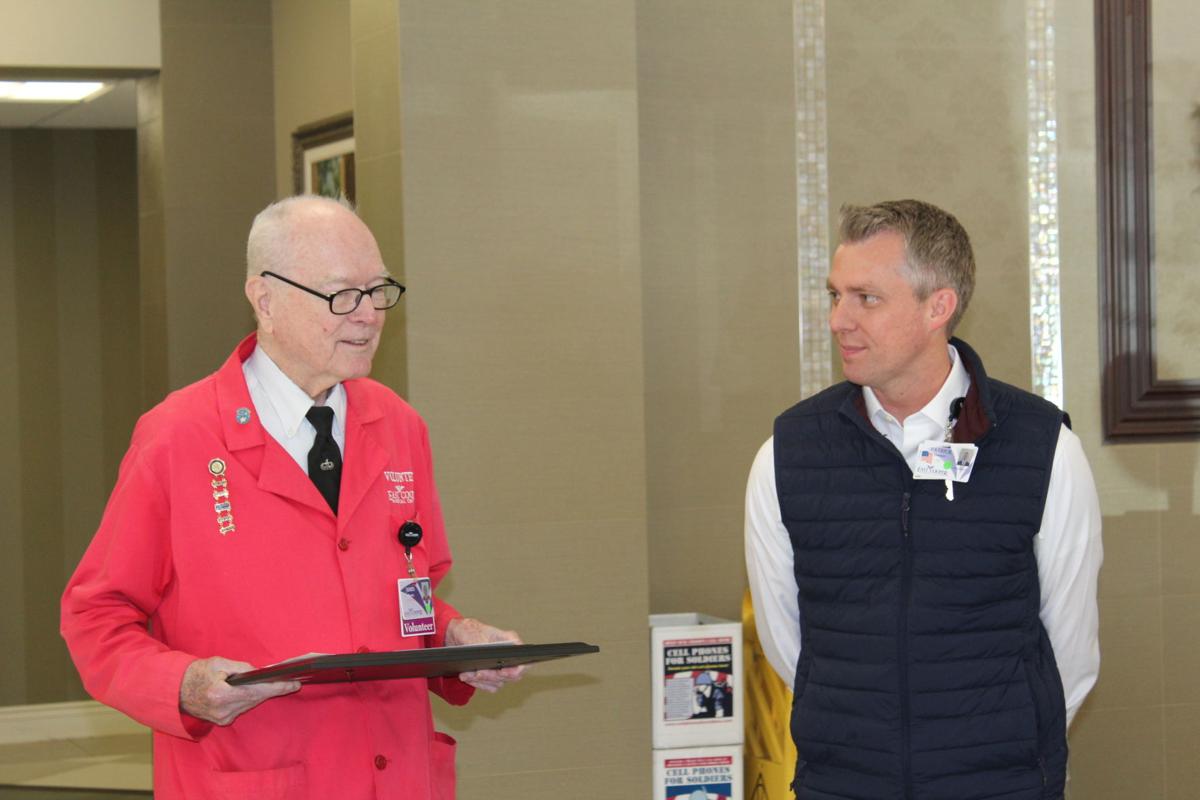 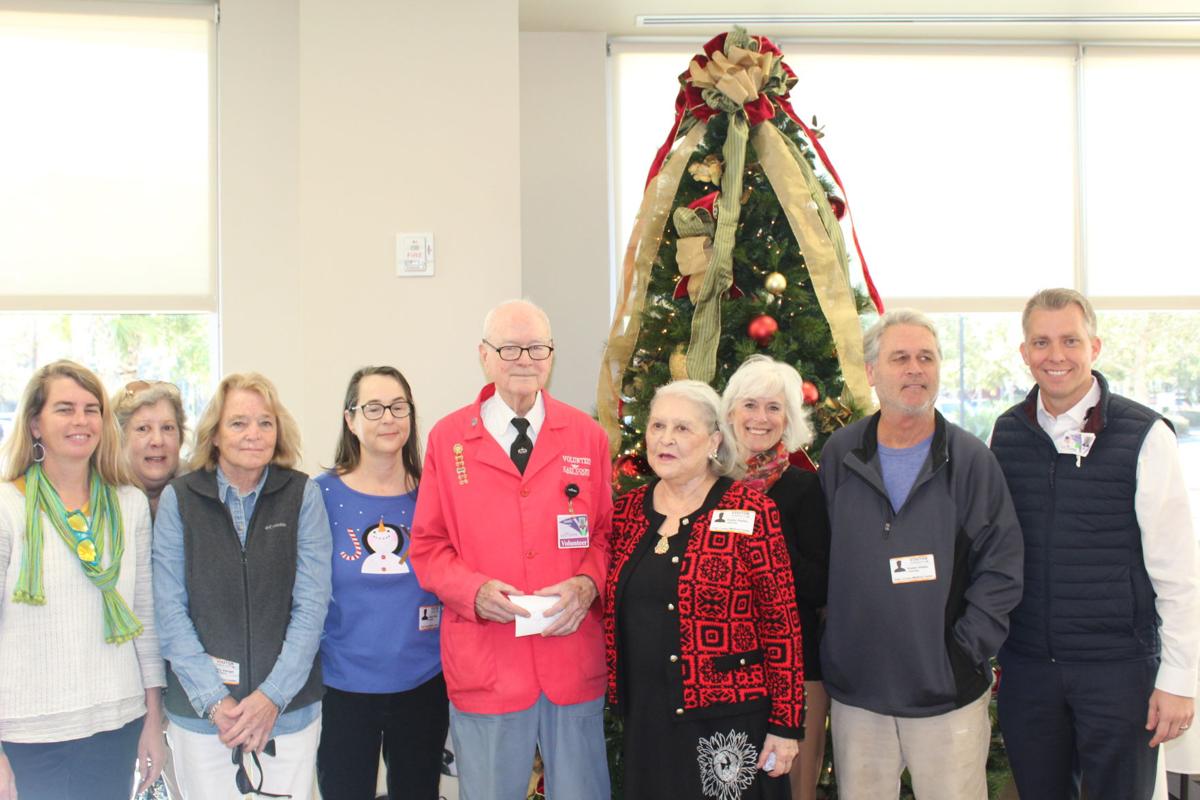 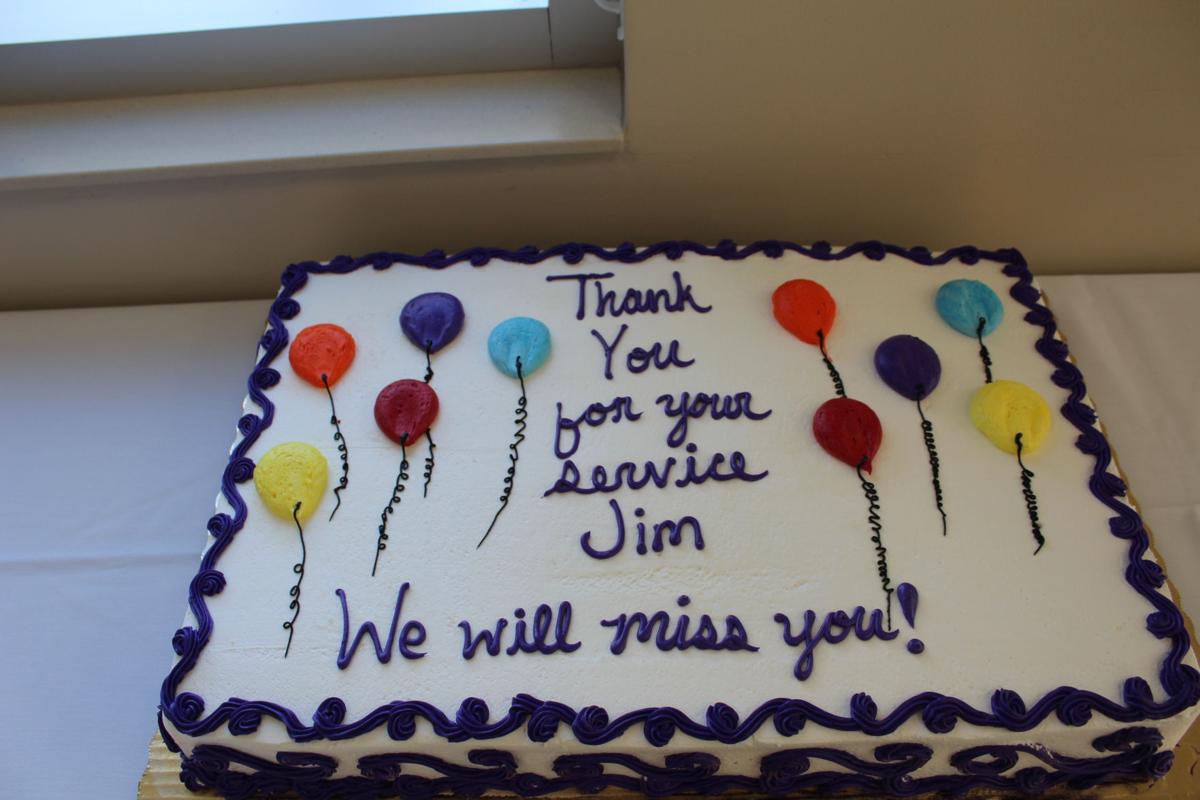 East Cooper Medical Center Voluntary Auxiliary member Jim Poore was recognized Dec. 18 for his 11 years and 7,000-plus hours of service.

It appeared to be just another normal busy morning at East Cooper Medical Center (ECMC) as staff were hustling about their rounds. The main lobby continued to grow in size but these visitors were not there to see a patient, they came to honor a volunteer.

As he turned the corner down a long hallway, out stepped 91-year-old veteran Jim Poore with a shock of excitement on his face. Humbly blushing from cheek to cheek, he couldn't believe that his family and friends were there to celebrate him.

The occasion was on behalf of Poore's retirement from the East Cooper Medical Center Volunteer Auxiliary. Over the past 12 years, he's logged more than 7,000 service hours and has wheeled out more than 2,500 patients.

Poore received an award that had an inscription of his number of hours dedicated. The hospital also framed the original letter he received in 2007 stating he was accepted to be an ECMC volunteer.

"I didn't realize all the implications until my first month or two in here where I realized it was much more than a me-thing or me doing something. It was actually helping people," Poore said.

Poore's efforts have not gone unnoticed in the past either. In 2010, he was awarded ECMC's Volunteer of the Year, the highest recognition any volunteer can receive from the hospital. That year alone he logged nearly 800 hours.

"Most of us volunteers are middle aged or retired, but y'all have one thing in common. You all want to be here and you're here because you think you're doing good for somebody. And you are," Poore added.

His wife Bonny also volunteers at ECMC. She may not have as many hours as her husband, but she's the one who can best attest to his selfless character. The two have been married for 56 years.

Even when Poore is not on duty he still comes to check-in on his patients, Bonny said. She noted that he stoically checks his emotions at the door and doesn't bring his work home with him.

For Poore, the toughest part of his job is consoling visitors and keeping them in high spirits while they're waiting to hear back results on the patient they're visiting. His job is to communicate with the operating room desk and the recovery room for updates. His top priority is to keep visitors informed about the status of their loved ones.

Poore is no stranger to public service, he served in both the Army and the Air Force. He spent nine years in the Army before joining the Air Force, where he spent 23 years and 8,000 hours before retiring as colonel.

While in the service from 1945-77, he served primarily as a troop carrier and had some temporary duty assignments as a forward air controller in Vietnam. His objective was to locate and mark targets with smoke rockets for the fighters and bombers to hit. On three different occasions Poore's plane was hit by ground fire but he was never injured.

"My airplane got the Purple Heart three times even though they missed me," Poore said.

Out of all the encounters Poore had while serving his country, the one that stands out the most was when he met helicopter Capt. Kris Kristofferson. Kristofferson, who was in the Army's 8th Infantry Division, would later become an acclaimed country music singer and songwriter known for "Me and Bobby McGee" and other Grammy Award hits. He also was an actor starring in many movies. He even won a Golden Globe Award for his role in the movie "A Star Is Born."

In 1964, in the skies overhead Germany, Poore and his Army division parachuted jumped from a helicopter. One parachute experienced a "Mae West" or a blown periphery which is a type of malfunction that contorts the shape of the canopy. He remembers the jumper hitting the ground with a big thud. Poore's Army general at the time didn't realize it was an Air Force general and thought it was one of their men, so he asked Poore to load the man up in the helicopter and get him to the hospital. He piled into the helicopter and realized Kristofferson was the pilot. The two took off toward the Army hospital until Poore corrected Kristofferson to take the wounded general to the Air Force hospital. Unfortunately, after dropping the general off, he ended up dying in the hospital.

Two weeks later, Poore and Kristofferson were both honored with the Air Force Commendation Medal. On his 80th birthday, Poore relived his glory days in the Air Force by parachuting from a plane one last time.

Now that he's officially retired, Poore plans to spend his free time by playing shuffleboard with his sons.

"We've been playing it a couple days a week. We may play it a little longer," Poore said with a smile.

Since 2008, one local veteran has logged 2048 hours volunteering his time helping others at …