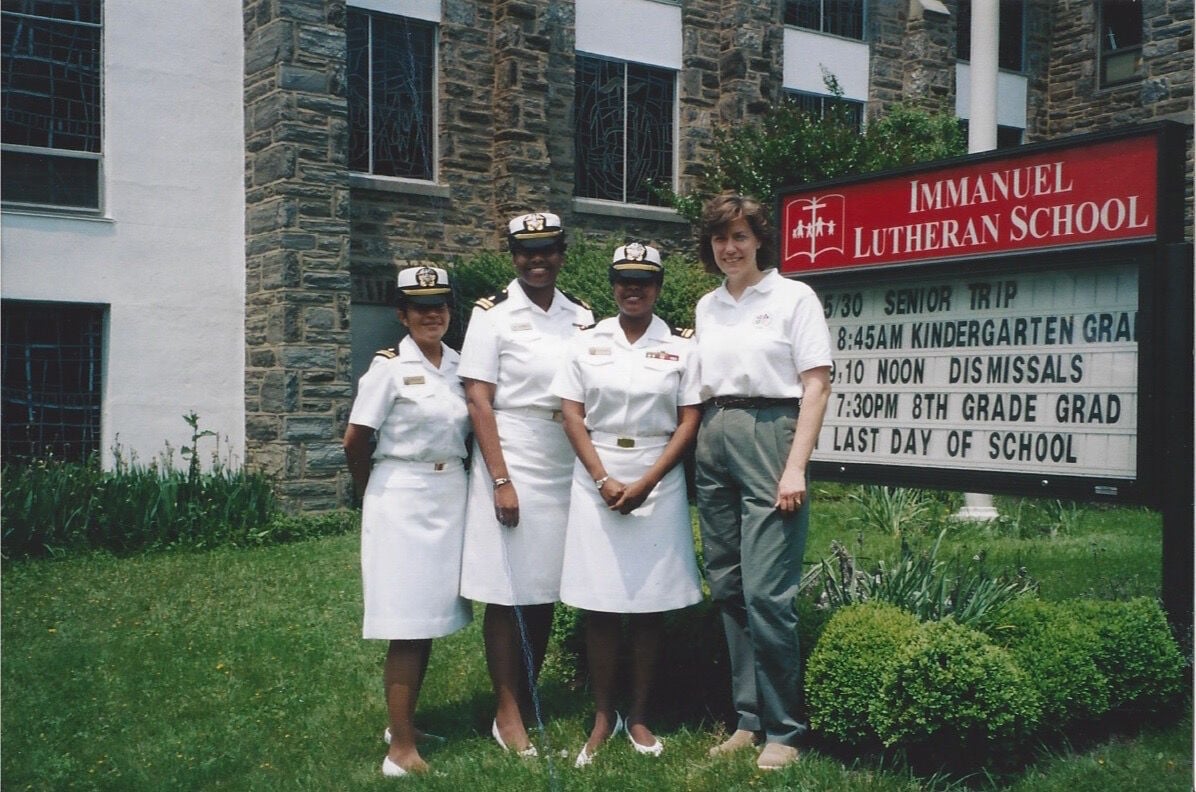 Stanley and other Navy nurses visiting a school that supported their efforts while they were deployed aboard the USNS Comfort. 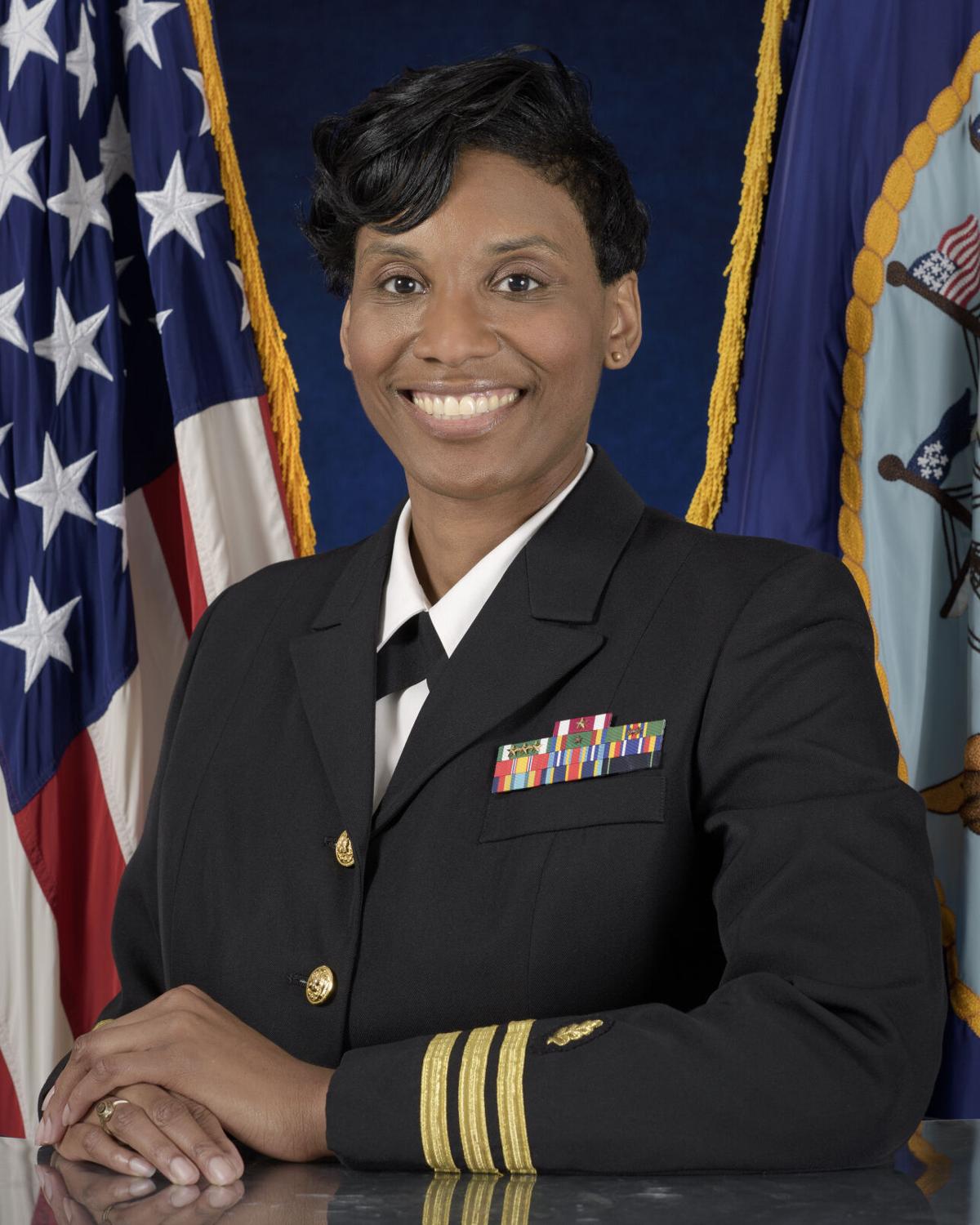 Stanley retired from the Navy in 2017. 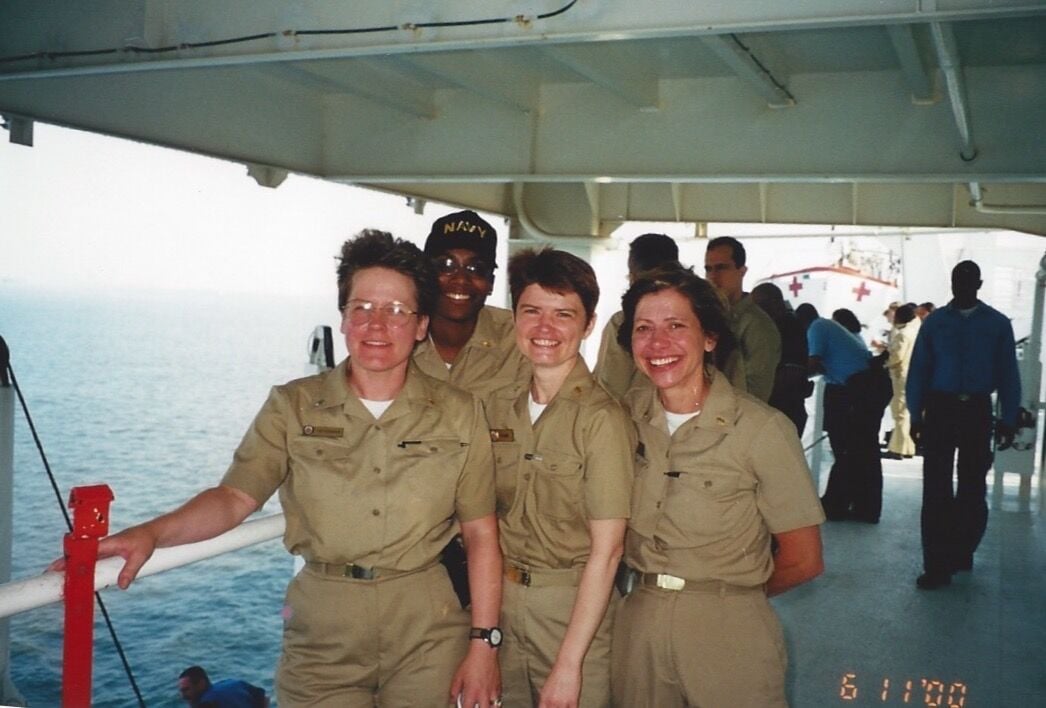 Stanley aboard the USNS Comfort for humanitarian work in 2001. 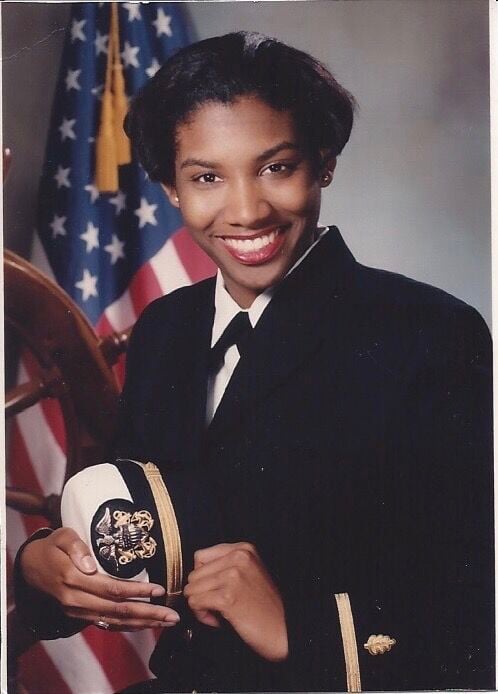 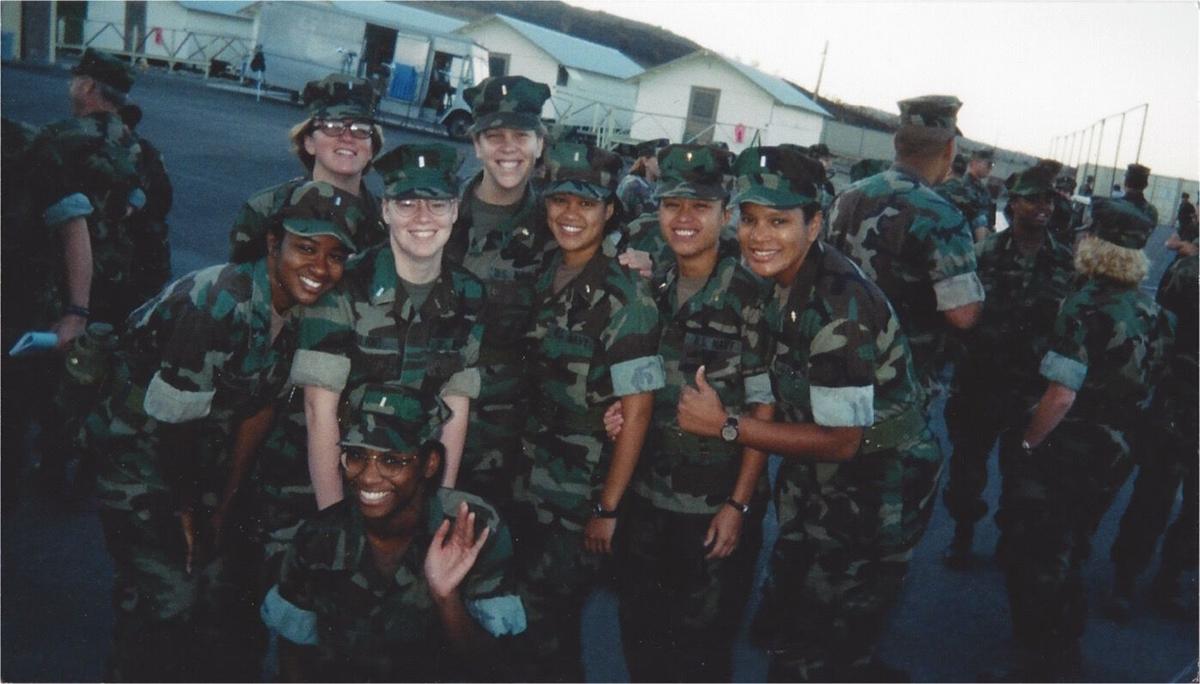 Stanley and other Navy members at Camp Lejeune training. 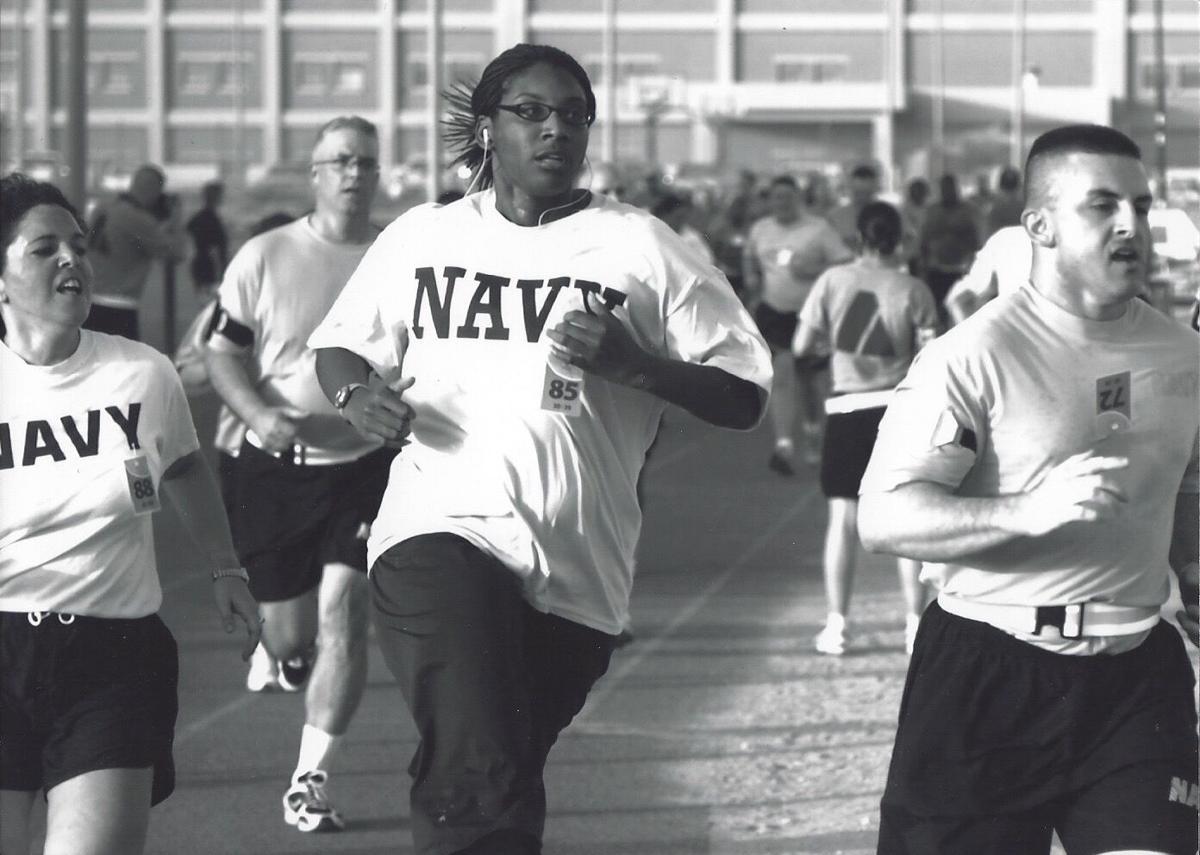 Stanley running a race while deployed in Kuwait. 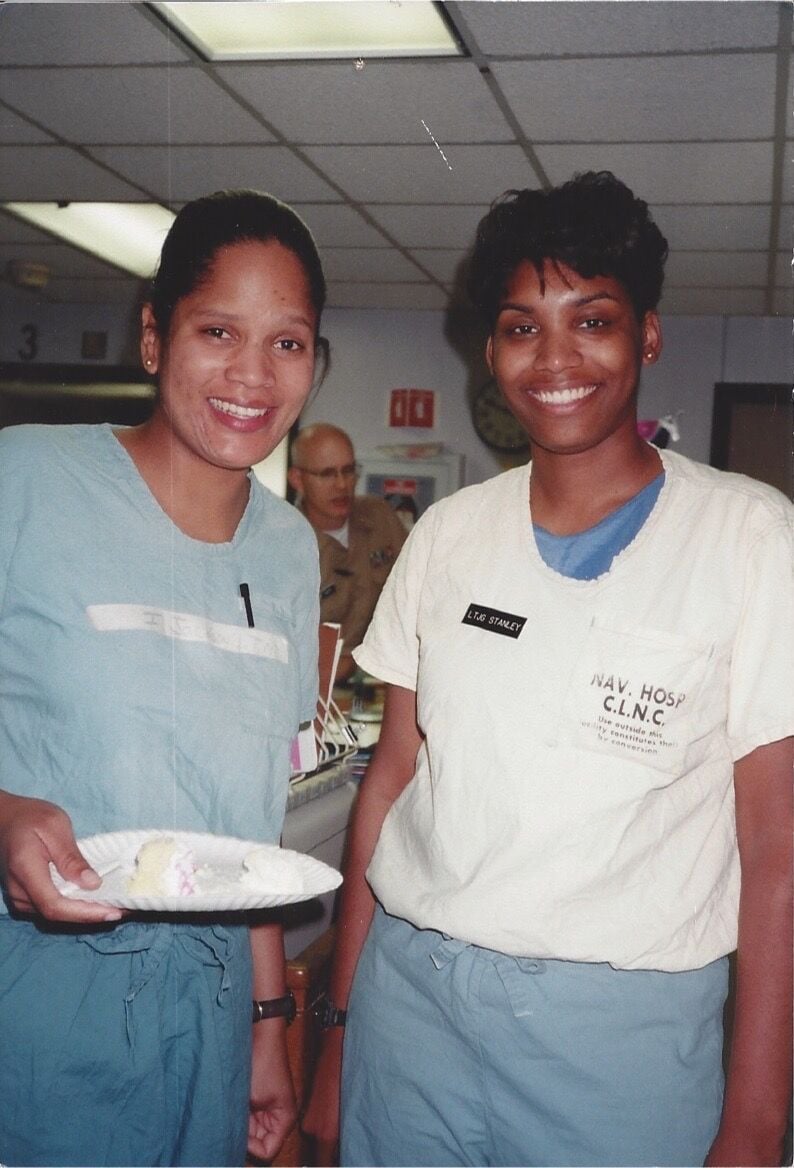 Stanley with a colleague working a night shift in the labor and delivery unit at the Naval Hospital in Camp Lejeune.

Stanley and other Navy nurses visiting a school that supported their efforts while they were deployed aboard the USNS Comfort.

Stanley retired from the Navy in 2017.

Stanley aboard the USNS Comfort for humanitarian work in 2001.

Stanley and other Navy members at Camp Lejeune training.

Stanley running a race while deployed in Kuwait.

Stanley with a colleague working a night shift in the labor and delivery unit at the Naval Hospital in Camp Lejeune.

Children often follow in the footsteps of their parents and Angela Stanley, a retired commander in the U.S. Navy Nurse Corps is no exception. She spent two years in Okinawa, Japan during her military service, the same island that her dad, a retired major general in the Marine Corps, was deployed for a short time when she was young.

As a military brat, she spent her childhood moving around every three years and sometimes more frequently. Her family moved to Camp Pendleton, Camp Lejeune and the Virginia and Washington D.C. area, but she didn’t reach Okinawa until she was in the military herself.

Her decision to join the military was made during her senior year of college when she realized she didn’t want to move back home after school. She passed by a bulletin board one day and saw a pamphlet for the Air Force. She sent in her information and didn’t hear anything back. Then, she got in contact with a Navy recruiter who got the ball rolling.

“It felt like the minute I dropped the little postcard in the mail, the Navy recruiter was calling me that night,” Stanley said.

She said she ended up feeling comfortable with the Navy because the Navy provides medical support for the Marine Corps, so she was used to being around Navy medicine.

She spent her first several years of service as a staff nurse and was deployed on the Navy hospital ship, the USNS Comfort, to the coast of Iraq in support of Operation Iraqi Freedom. She provided care in the women’s and children’s unit and she said the mission changed from providing care to United States troops to Iraqi citizens. While on the ship, she had the opportunity to serve in leadership roles.

Prior to deploying and when she returned, she was the night shift nursing supervisor at Walter Reed National Military Medical Center, formerly known as the National Naval Medical Center. There, she was selected for a graduate school program while still on active duty. She attended Catholic University and received a master’s degree in nursing as a community public health clinical nurse specialist and a family nurse practitioner.

During the two years she spent in Okinawa, she began as a division officer in labor and delivery and moved up to department head of the maternal child nursing units. While she was there, she was promoted from a lieutenant to lieutenant commander.

Her dad, who had always played an active role in her military career as he commissioned her into the Navy and promoted her at each rank, flew out to Okinawa with her mother to be there for her promotion. This meant visiting a place he has been deployed 20 years earlier.

“I always wanted to see where he went, so that was kind of some of the fascination to be honest,” Stanley said.

During their visit, Stanley drove her parents up and down the 25-mile-long island to visit some of the spots her dad was familiar with. “It took him down memory lane,” Stanley said. While quite a bit had changed over the years, there were some aspects that stayed the same.

“Me sitting on the right side of the car, driving down the opposite side of the street and they’re just like, ‘What in the world?’ My mom more so, not him,” Stanley said.

Okinawa was Stanley’s favorite duty station. During her daily life, there would be reminders that she was living in a very different part of the world. She said she would go on a run and pass cars on the opposite side of the road. She enjoyed observing the Japanese people and listening to the different language.

“That was kind of like the, ‘Oh shoot, we’re not home anymore,’ Stanley said.

She also had the opportunity to travel and experience cultures outside of Okinawa, at least when she could get time away from her job. As the senior obstetrics nurse, she typically had to be available to go to the hospital whenever needed, but she still able found some time to travel. She said one notable excursion was climbing Mount Fuji. She also visited several surrounding islands near Okinawa, such as Thailand and mainland Japan, including Tokyo and Tokyo Disneyland.

“That was definitely the location where you got autonomy; you were immersed in the culture. I just don’t think there were any bad points at all,” Stanley said.

After 20 years in the Navy, Stanley retired in 2017 and now lives in Charleston, the same city where her mom grew up and her parents met at South Carolina State College. Stanley is an Assistant Professor in the Doctor of Nursing Practice Program at MUSC’s College of Nursing.

As a Navy nurse, one of her roles was to train hospital corpsmen, so she recognized her passion for teaching early on. Although even with her love of teaching and prior experience, she said the transition from military to civilian life was still an adjustment.

Stanley said the change of pace was very different, like quickly slamming on the breaks. While in the Navy, she might be given 10 to 12 different jobs that all had to get done. When she came to the College of Nursing, they told her to take her time adjusting, which was very different.

“I would say my transition probably was a little more different retiring from the Navy and transitioning from active duty to being full-time faculty at MUSC,” Stanley said.

Her initial transition into the military was less difficult since it was a familiar environment. However, even though Stanley came from a military family, she didn’t necessarily see herself following down that path, at least as a teenager.

“I used to joke around and say I wanted to be a Marine, but when it really came down to it I had no interest at all in joining the military, I would say probably, throughout the high school years,” Stanley said.

Stanley went to Clemson University and said she fully enjoyed her college experience. During nursing school at Clemson, she developed a passion for maternal-child nursing. She said there are mostly happy occasions when it comes to this aspect of nursing, although that’s not always the case.

“As I continued in the field I did encounter the not-so-happy moments and challenged myself to be the provider, advocate and support person for my patients,” Stanley said.

After Okinawa, she returned to the Naval Academy. Her office turned out to be in the nursery where she was born. This three-year experience at the Naval Academy was challenging as she was both a department head of a primary care clinic and a nurse practitioner.

Then, Stanley was deployed to Kuwait where she served as a family nurse practitioner for American forces and contractors before heading to Walter Reed Hospital as a clinical nurse specialist in the OB unit, where she had worked earlier in her nursing career. She was chosen as a flag aide for the commander of the hospital who was selected as the Navy surgeon general. Her final duty station was at the Naval Medical Center Portsmouth as the associate director for primary care.

As a woman in the military, she said it was common to walk into a room filled with mostly men. She said while things are changing, in many instances all the women in the room would be nurses.

She said there are more women physicians and more women in key leadership positions that are not nursing related across all services now, not just the Navy. She doesn’t see this as much different from civilian life where there are still male-dominated and female-dominated careers. In the nursing profession, she said men are starting to take larger roles, so in general there are shifts happening both ways.