3D model of the “building envelope” for the entire Broadway Loop block, within which any building(s) must fit within. 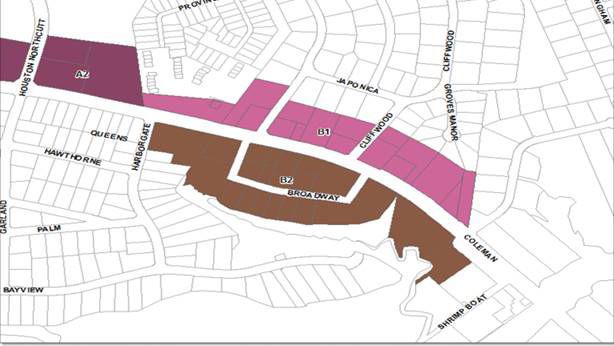 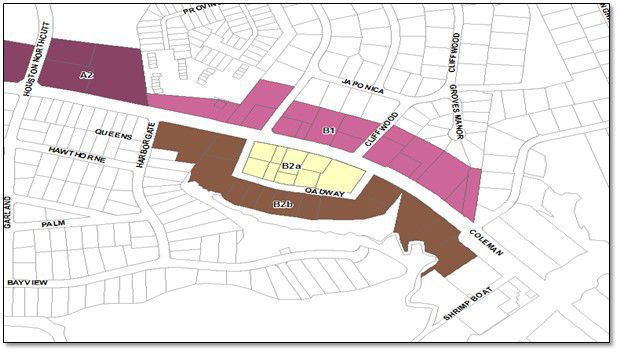 Proposed division of subarea B2.

3D model of the “building envelope” for the entire Broadway Loop block, within which any building(s) must fit within.

Building heights along Coleman Boulevard at the Peach Orchard Plaza may rise to 55 feet in the coming months.

At the July 9 Mount Pleasant Town Council meeting, an ordinance to amend the town's Code of Ordinances to change the heights passed first reading.

Jeff Ulma, the town's Planning Director, explained council had already annexed and rezoned the property of land the Gramling Brothers Real Estate and Development own at the Peach Orchard Plaza. Now, the property owners and the town's planning staff have looked at the possibility of an adjustment of building heights along Coleman Boulevard and a series of special provisions.

Through the ordinance a subarea of the Coleman Boulevard Overlay District Guidelines could be divided into two sections. The first would be the parcel of land encompassed by Coleman Boulevard and Broadway Street. The other would be all of the remaining property in the existing subarea along Broadway and Coleman.

The suggestion would take the entire subarea instead of just the parcels of land that the Gramling Brothers own and raise the maximum building height allowed to a 50-55 feet option. The other subarea would stay the same, with a 45 foot building height.

The ordinance would also change the way the town measures building height in this particular subarea. Instead of from the base of the building, they would measure the height from the elevation of the top of the curb on Coleman Boulevard. Ulma said that staff recommends that this technique be applicable throughout the entire corridor and something council could consider at a later time.

Ulma showed the council an illustration for a "building envelope" for the entire block and what it would look like if the building(s) would need to fit within. The idea is that the height of the building on the Coleman Boulevard side and two perpendicular sides of the loop would start at 45 feet and slope up to the maximum building height as the property steps back into the block. There would be no step back 45 foot limit on the Broadway side of the block.

The Planning Commission recommended approval of the ordinance. Ulma said the Planning Committee said they were more comfortable leaving it at 45 than 55 feet and not to worry about a minor difference in height. Planning Committee also suggested council make changes in this subarea to measure building heights from the top of curb on Coleman.

Councilmember Kathy Landing made a motion to approve the first reading of the ordinance, followed by a second from councilmember Joe Bustos.

Councilmember Gary Santos raised a question, "Would this not be considered spot zoning? For instance I know when they did the parking garage they wanted to go to 55 feet, spot zoning came up so the town went ahead and upzoned nine other spaces around the garage to 55 feet so it wouldn't be a spot zoning. Then, after it was approved they lowered the other nine back down to 45."

Ulma said in the town's view it would not be considered spot zoning since there are already sub-districts within the Overlay with different treatments for height. He used Moultrie Plaza as an example that has a higher height limit when compared to the rest of the corridor.

"In our view, we've treated the entire block the same way and multiple properties there and think that it would be a reasonable approach," Ulma said.

Ulma said there are other areas with varying heights and requirements in the Coleman Boulevard Overlay district.

David G. Pagliarini, the town's attorney concurred with Ulma's position on spot zoning. The town's legal attorneys did not respond to the Moultrie News regarding follow up questions on spot zoning by the time of this article's publication.

Councilmember Jim Owens said the ordinance created a separate designation for a higher building and that about five council members just went through the process of lowering building heights on Coleman Boulevard. Therefore he couldn't see allowing a particular parcel being raised to have a higher height.

"I want to remind everyone that this parcel was in the county. They could have pulled a building permit last November to build 400-500 storage units with no activity zone, no retail. And we would have no design approval, no input on this at all. This was a desperate attempt on behalf of the town to stop something that would be a detriment to Coleman Boulevard," Mayor Will Haynie said.

"Going to 55 feet on the interior is a compromise because frankly the owner and developer of this has the upper hand. But in most of our opinions, at least those of us who have seen this, having 400 storage units with no retail fronting on Coleman Boulevard would be a death of that part of the town," he added.

Owens asked Mikell Harper, VP Business Development of Gramling Brothers, at the meeting if their business had ever built a storage facility. Harper said they had not.

"We have multiple partners in the project and one of our partners has built probably 500,000-600,000 square feet of storage. So we do have an experienced partner in it," Harper said.