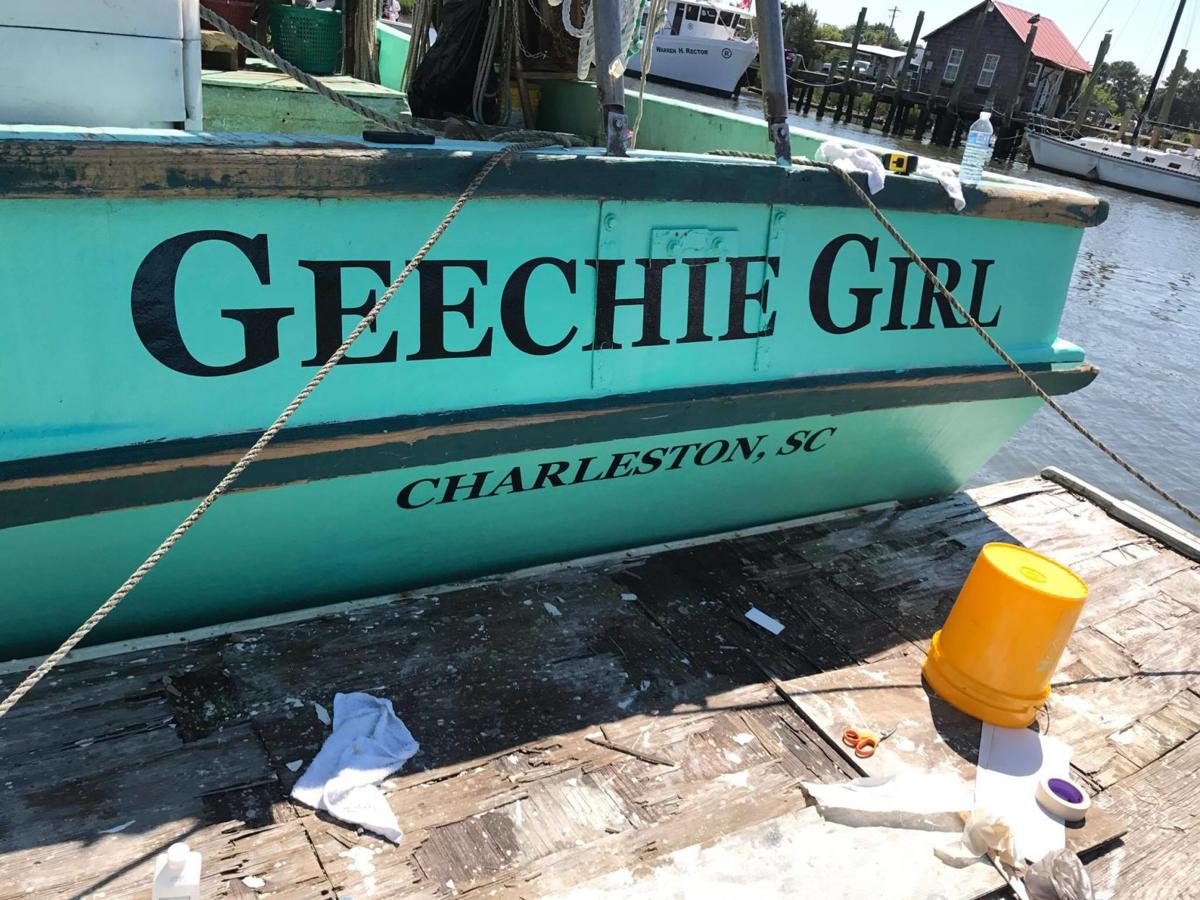 Terry and Renee Suggs recently purchased a shrimp boat to add to the Shem Creek fleet. 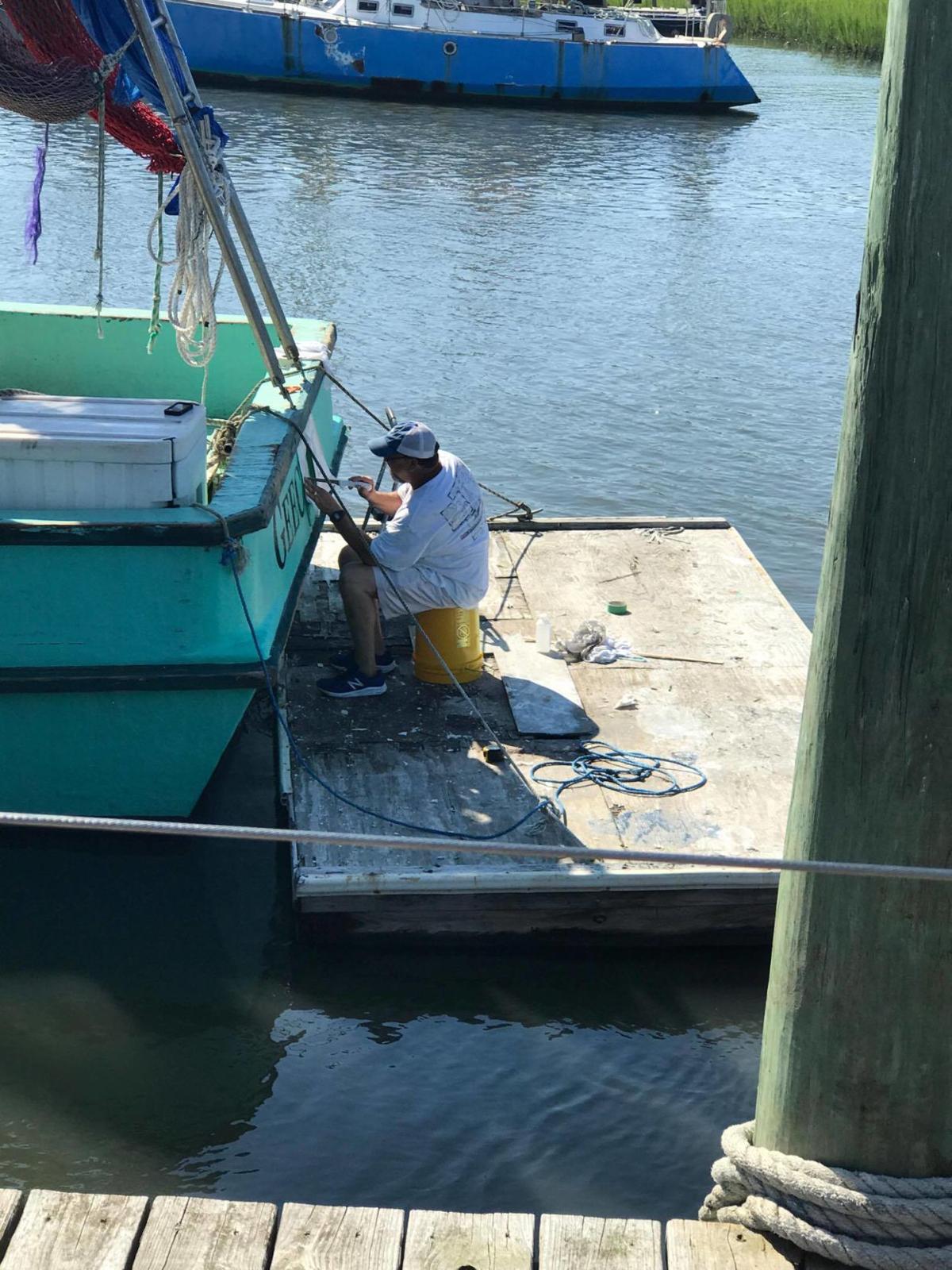 At first Terry and Renee Suggs were going to repaint their new boat, but the bright teal green has grown on them. 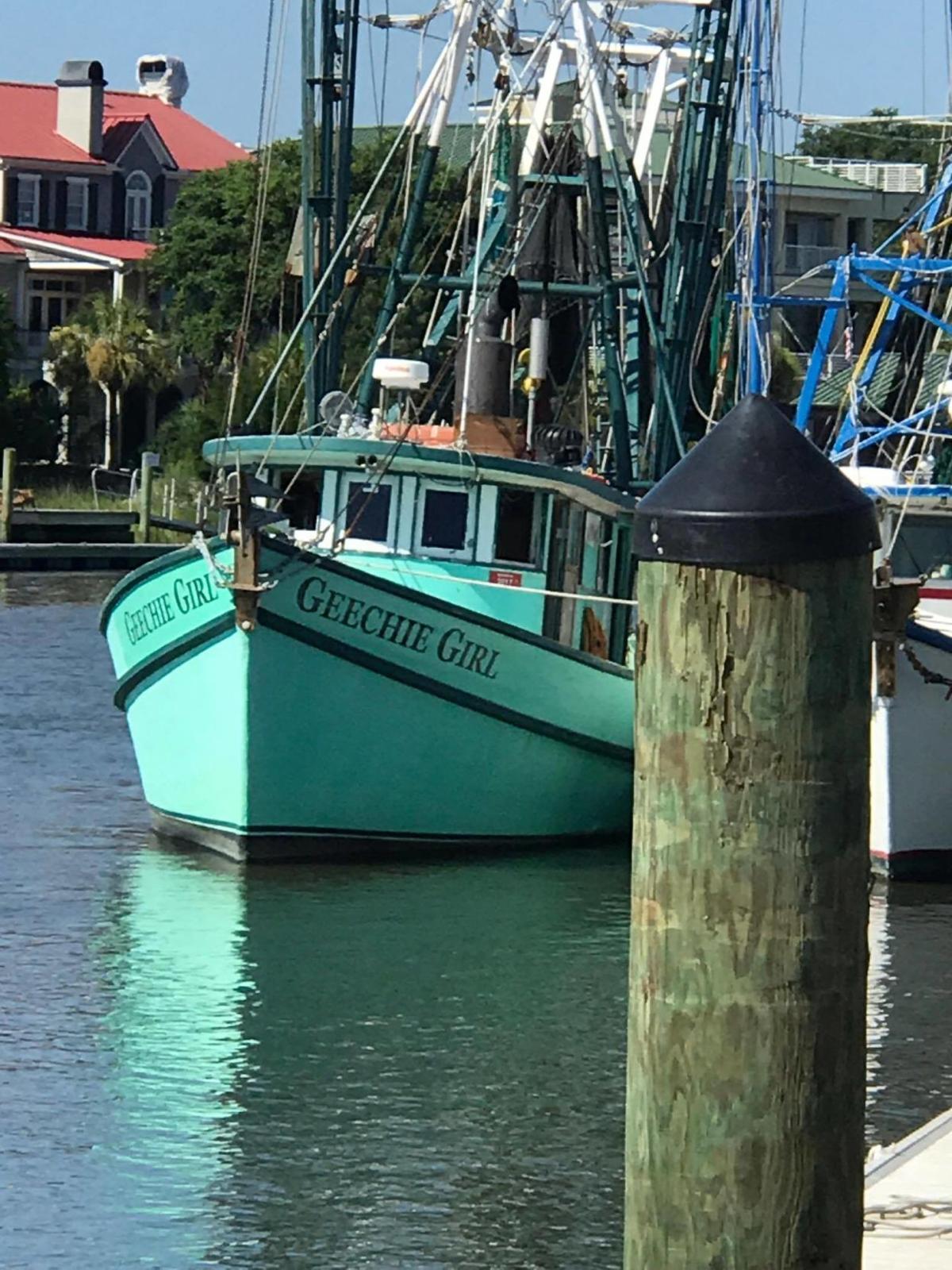 The Geechie Girl stands out among the rest of the fleet in Shem Creek due to its nontraditional paint job. 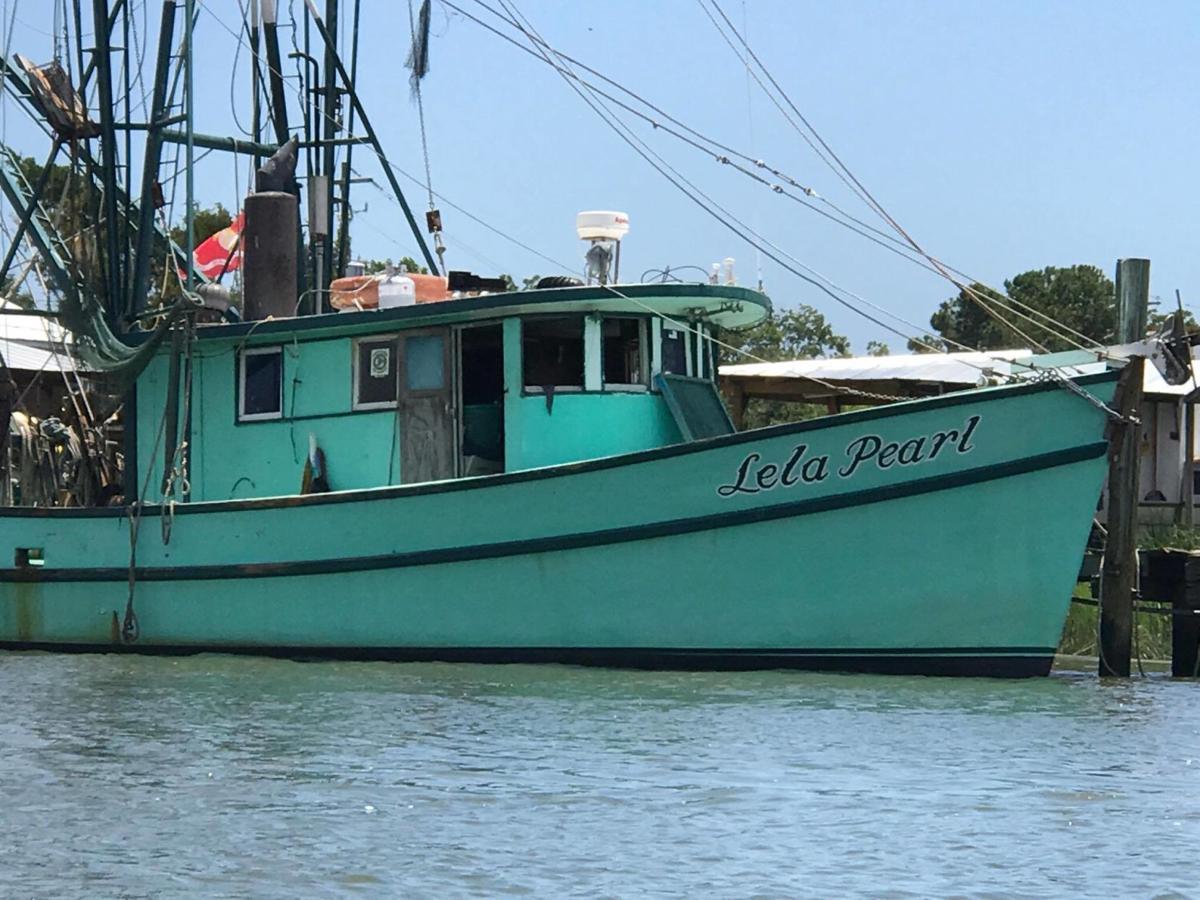 The Suggs family bought this boat in Darian, Ga. and brought her home to Shem Creek. 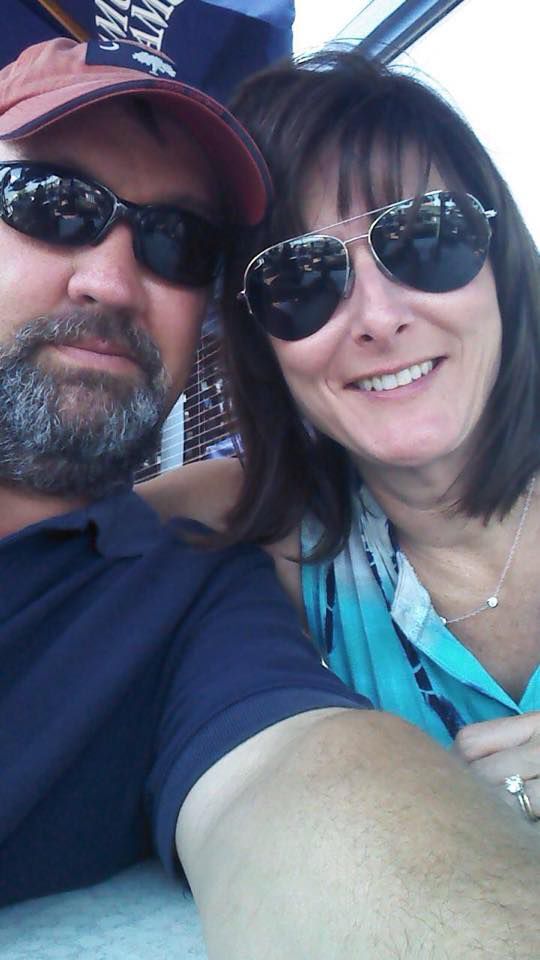 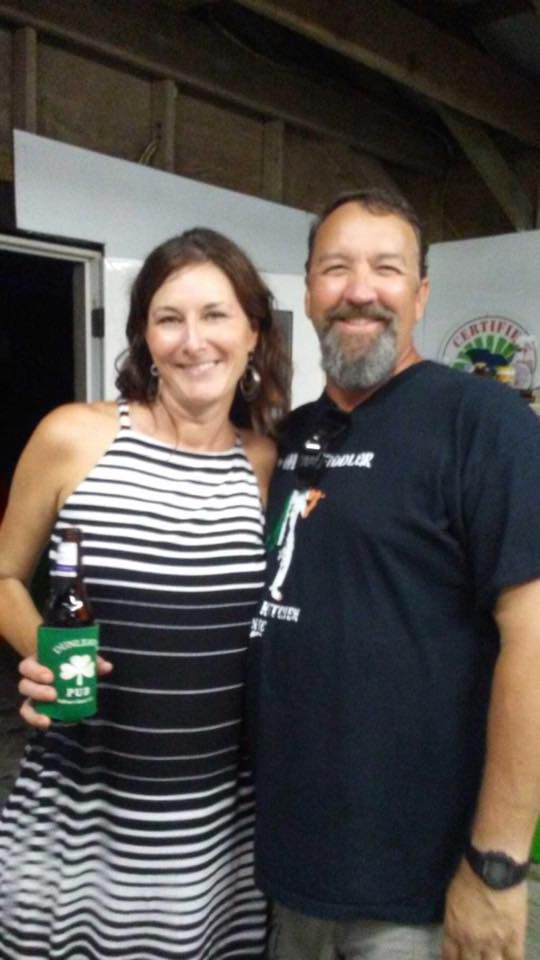 Terry and Renee Suggs recently purchased a shrimp boat to add to the Shem Creek fleet.

At first Terry and Renee Suggs were going to repaint their new boat, but the bright teal green has grown on them.

The Geechie Girl stands out among the rest of the fleet in Shem Creek due to its nontraditional paint job.

The Suggs family bought this boat in Darian, Ga. and brought her home to Shem Creek.

Renee Rector Suggs is no stranger to the life of shrimping.

She is the daughter of Bubba and Pam Rector who has owned numerous shrimp boats docked in Shem Creek. Bubba's most current is the Warren H. Rector found at Geechie Dock down Magwood Ln.

Her mom came from six generations of shrimpers. And while Warren is a first generation shrimper he provided a life for his kids that put shrimping in their blood.

Shrimping is not an easy profession. It's hard work, it's seasonal and has it's ups and downs. But despite it all, Renee and her husband Terry took the plunge and have purchased a trawler out of Darian, Ga. and named her Geechie Girl.

"My dad started shrimping when he was about 15. He turned it into a life-long career. In his younger years he shrimped the coast,"  Renee said. They spent vacations in Fernidno Beach and Cape Canaveral where her dad made stops along his fishing route.

Renee went out a few times with him during those years, but due to getting sea sick, she left it to her brothers to carry on that side of the family business.

That didn't meant she didn't have the "shrimping bug."

In the meantime, her future husband Terry got a job at Mount Pleasant Seafood as a teenager. Later he scored a job aboard one of the Magwood family boats. Eventually he would meet his bride Renee aboard Warren's boat Miss Vivian, right at Geechie Dock.

Terry started working on tug boats before he was even 20 years old. The couple married young, Terry just 21 and Renee 19 years old.

He started as a deckhand and became a captain after about ten years. After he became captain he studied for his docking pilots license and became a full time pilot 5 years ago. By then they had two children, Kevin and Annabelle.

For years Terry talked about owning a shrimp boat. Renee discouraged him but when their daughter graduated, she started to come around to the idea. "I thought it would be fun so we decided to give it a go."

They found a boat they loved and put money down on it but her nephew came across another one in Darian, Ga. Everything about it was what they were looking for.

After 19 hours the boat made her way into Shem Creek and eased in beside the rest of the fleet on the town dockside of the creek. For days people wondered what this bright teal green shrimp boat from Georgia could possible be doing in Shem Creek.

As expected, word quickly spread that the Suggs were adding to the fleet. Within days the name Geechie Girl replaced the name Lela Pearl.

Terry intended for her to be a weekend warrior but quickly learned it would be just too much for him to work full-time and try to shrimp on the weekends. They soon hired one of the most well known captains on the creek, Rocky Magwood.

"He's been a Godsend," Renee said. "He knows everything about shrimp boats, in addition to merely shrimping."

Rocky and Terry worked around the clock to get her ready. There was no shrimp at all that first month, but now they are going out everyday and successfully selling their catch to local restaurant's like Art's and individual customers who like to buy in bulk.

What's in a name

Warren Rector's boat Anna Grace sank off the harbor in 2009 and he did what any seasoned captain would do. He bought a new one. Renee and her mom, Pam, had hoped he would name her Geechie Girls.

He's always named his boats after the women in his family. "I've named them after my wife, my kids, even my grand daughters," he said in a Moultrie News interview in 2009.

But this boat now carries a man's name, his father's.

"My Dad was a docking pilot for McAllister here in Charleston for over 25 years. Throughout my entire life he always supported me in everything I did. When we started this project he just showed up one day, picked up the welding torch and went to work. It's unbelievable, he's 91 now. I wanted this boat to be a tribute to him. He hasn't seen it since we put the name on so he doesn't even know yet. He'll find out when he comes back to town this week," he told columnist L.J. Wallace in that interview.

And that worked out just fine, Renee said. Because now she and her husband can use the name in remembrance of her mother who passed away last year and in honor of Geechie Dock where the Rector and Suggs family sell their retail seafood.

Little by little the Shem Creek fleet is trying to reestablish itself. "Keeping boats in Shem Creek is very improtant to me and Terry. But the main reason we bought the boat is to keep up the family business," she said.

"The industry is tough. We're not catching as much as we used to and expenses are high. But shrimping is in our blood - we're born with it," she said. "It's important to support local business of all kinds so we can keep those businesses alive and keep local Mount Pleasant folks in town and employed."

Most of the men in their family shrimp full-time or jump on a boat when they're not at they're 9 to 5. You can find Renee at Geechie Dock handling the books for her dad and their own boat. Her son Kevin runs the retail side of the business and her father runs the dock. It is truly a family business.

As for the Geechie Girl. They bought her in truly good shape. And other than a few cosmetic things, she's a great boat. Everyone wants to know about that color. "It's grown on us. It stands out and people have taken such beautiful pictures of her...we'll see."

The Suggs describe shrimping as a labor of love. "It's hard to get away from it. The guys fall in love with it even though it's hard and a lot of work goes into it."

The Geechie Girl is a 50-foot wooden boat built in North Carolina in 1970. She's special for a lot of reasons but what brought Terry and Renee full circle was knowing that one of the original owners was the one and only David Cook who was one of the very first captains Terry worked under, making it all meant to be for Renee.