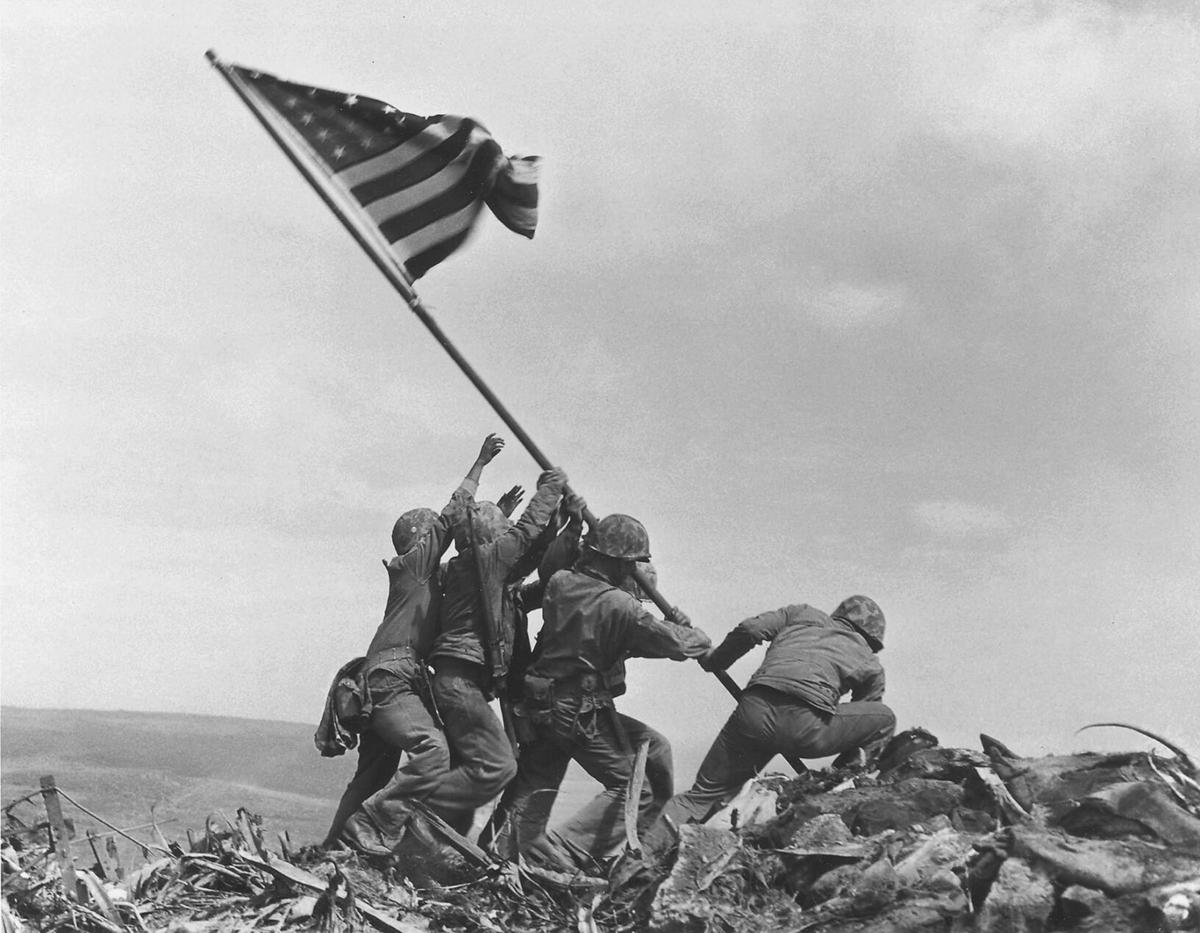 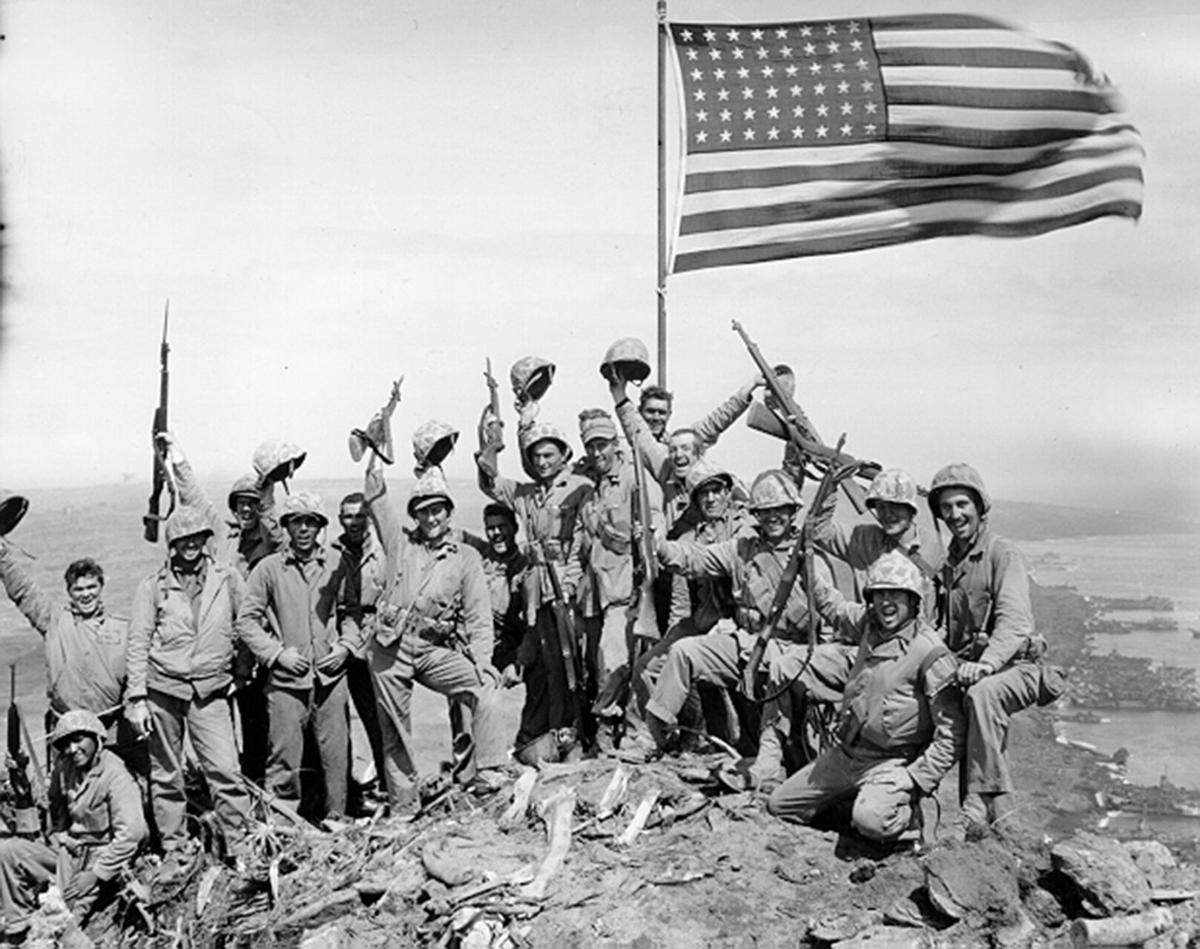 A group of Marines posing in front of the now flying flag on top of Mount Suribachi. 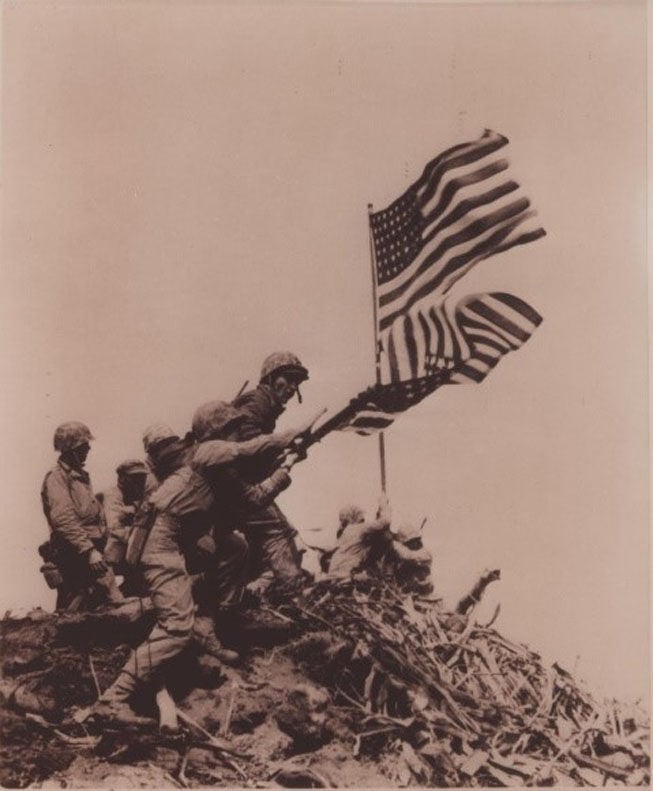 Joe Rosenthal wrote, “I thought of trying to get a shot of the two flags, one coming down and the other going up. But, that turned out to be a picture Bob Campbell got.” 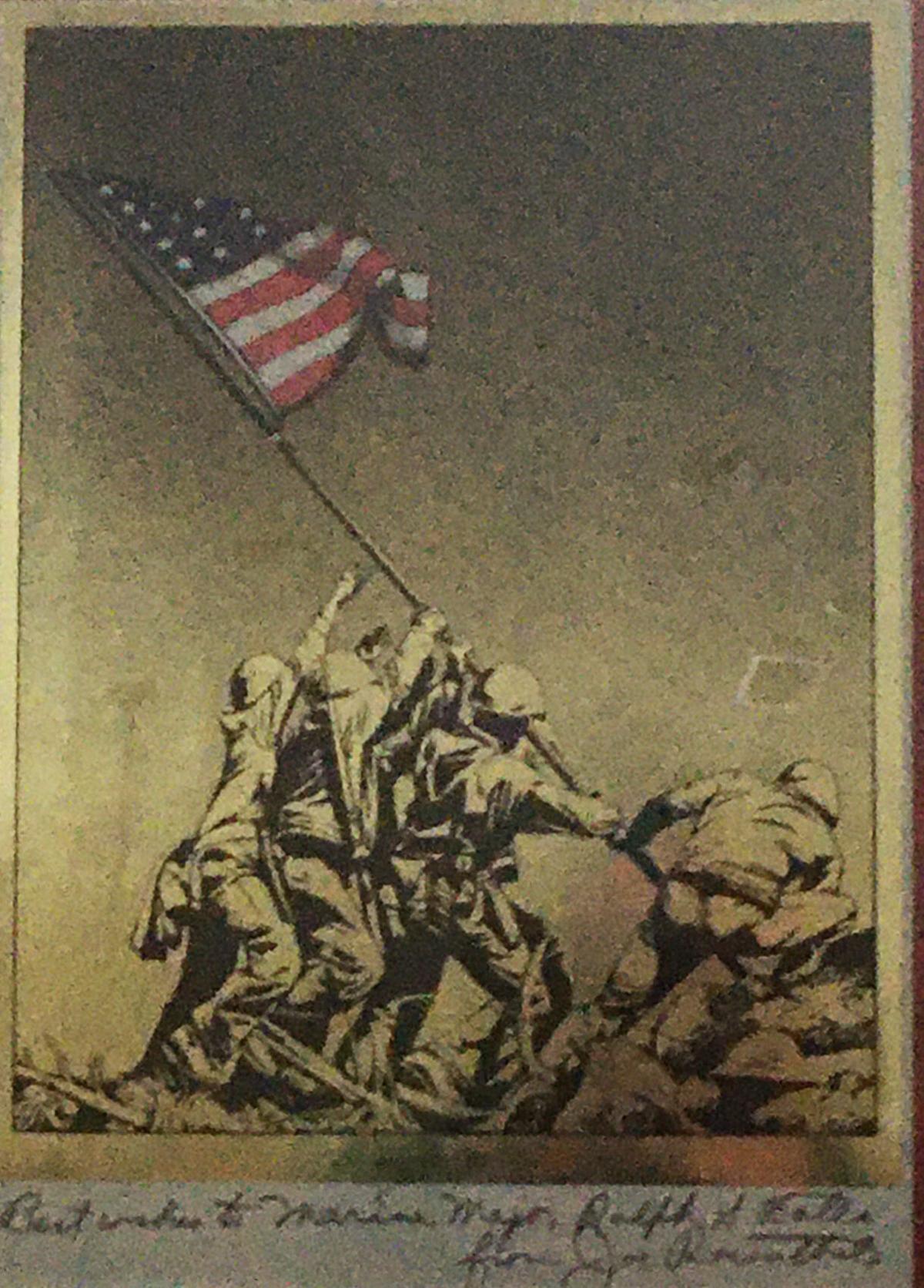 Etching of the famous photo given to Major Ralph Stoney Bates from Joe Rosenthal.

A group of Marines posing in front of the now flying flag on top of Mount Suribachi.

Joe Rosenthal wrote, “I thought of trying to get a shot of the two flags, one coming down and the other going up. But, that turned out to be a picture Bob Campbell got.”

Etching of the famous photo given to Major Ralph Stoney Bates from Joe Rosenthal.

In August 1958, on my way home from the Far East, I met the photographer of that iconic photo, Joe Rosenthal, at the Marine Memorial Club in San Francisco. It’s still there. He looked like just a lonely old man (he was 46, while I had just turned 20), sitting alone at the bar. Engaging him in conversation, I discovered who he was. Somewhat in awe, and attempting to present an air of being a tough Marine Corporal, something this 20-old failed to accomplish; none-the-less, he talked to me for the length of a beer or two, discussing mostly his photo events on Guam and Peleliu. When I asked about the flag-raising on Iwo, he said he didn’t want to talk about it. I didn’t understand why, but, he had bought my beer, so we continued chatting for a while longer. Then, I departed and continued my journey from Japan, via Treasure Island, toward my home for a short stay before reporting to my next duty station. In the intervening years since that encounter, I have learned many details about Joe, and that flag raising. It is an amazing story.

On Feb. 23, 1945, four days after D-Day, a 33-year-old, near-sighted, Associated Press photographer, by the name of Joe Rosenthal stepped ashore on the island of Iwo Jima. He had heard a flag was to be raised atop Mount Suribachi, the extinct volcanic mountain on the island. Once ashore, he met two Marine photographers, Bob Campbell and Bill Genaust who were also there to take photographs. Together, they began to climb the mountain. On the way up they came across four Marines descending the mountain. One of them, Lou Lowery of Leatherneck Magazine, advised him the flag had already been raised. Then, he added he thought it was worth the climb just for the view. The die had been cast.

The famous still (as opposed to motion) photo of the second flag raised atop Mount Suribachi was taken by Rosenthal, while Sergeant Bill Genaust captured it on a motion picture camera, as it was actually going up. It was a larger flag than the first one, and he didn’t think he was in a position to get a good shot. In Collier Magazine in 1955, he wrote, “I thought of trying to get a shot of the two flags, one coming down and the other going up. But, that turned out to be a picture Bob Campbell got. I couldn’t line it up. Then I decided to get just the one flag going up, and I backed off about 35 feet.”

Now, Joe was only 5-feet 5-inches tall, so he had to put his Speed Graphic camera down, stack some stones and lay several Japanese sand-bags atop them, then stand on the sandbags to see the flag going up from his depressed position. He didn’t actually think he had taken a good shot.

After the flag was up, he hurriedly asked a group of Marines to pose in front of the now flying flag, and he snapped that photo (thus, the “staged” photo controversy), plus several more. A few days later, after his film was developed in Hawaii (he had no idea what was on his film as he had taken dozens of photos), he was contacted and asked if the flag photo on top of Suribachi was posed. He replied that it was, thus, the start of the controversy.

Joe Rosenthal’s first view of his famous photo was in the Stars and Stripes newspaper. That was the shot he didn’t think he had caught very well, and it was on the front page of virtually every Sunday newspaper on February 25. It was the only photo to receive the Pulitzer Prize in the same year the photo was taken. Not too long ago, in 1991, a New York Times book reviewer wrote that the Pulitzer awarded to Joe should be revoked because Joe wasn’t even there when the (first) flag was raised.

After departing the bar in San Francisco, I was confused about how Joe felt about his historic photograph. Today, I can understand his feelings at that bar so long ago. It had been the bane of his life for this seasoned combat photographer.

Charles Lindberg, a Marine involved in the first flag raising argued with Joe often about the second flag raising off-and-on. They were friends, of a sort. Some say he (Lindberg) had felt left out of the fame enjoyed by several survivors of the second raising. It is unknown what Joe had to do with that feeling.

The man who apparently started the controversy of it being a staged event, Robert Sherrod, a Time-Life correspondent later admitted he was wrong. Another famous writer, Jack Anderson promised readers a “true” story of the flag-raising, by accusing Joe of hand-picking the individuals who raised the second flag. Later, he also apologized, and said he was wrong. Regrettably, the damage had been done. Numerous writers and correspondents often accused him of “staging” the iconic photo; however, motion-picture footage shot by Marine Staff Sergeant Bill Genaust clearly shows the iconic flag-raising and a stop-frame reveals the exact image Joe captured aside from the foreground due to his position on the mountain, which simply added to the drama,

This photo was an immediate sensation across the country and remains one of the most reproduced photos of all time. Americans were weary of war. This photo raised the spirits of a nation. The AP paid him $1,500 for the photo. So, although the photo brought him fame, it did not bring fortune. Joe did not even have a copy of the famous photo in his apartment. He only had an etching of the Iwo Jima photo in his home office, a gold etching with only the flag in living color against the gold.

After retiring from active duty with the Marine Corps, in 1982 while working for a Sheriff’s Office in Rochester, N.Y., I received a cylinder in the mail from San Francisco. It was one of his etchings. On the surface, in his 69-year-old handwriting is: “Best wishes to Marine Major Ralph S. Bates, from Joe Rosenthal.” It resides, framed, on the wall of my cluttered, disorganized home office. It is my most prized possession. Semper Fi, Joe.