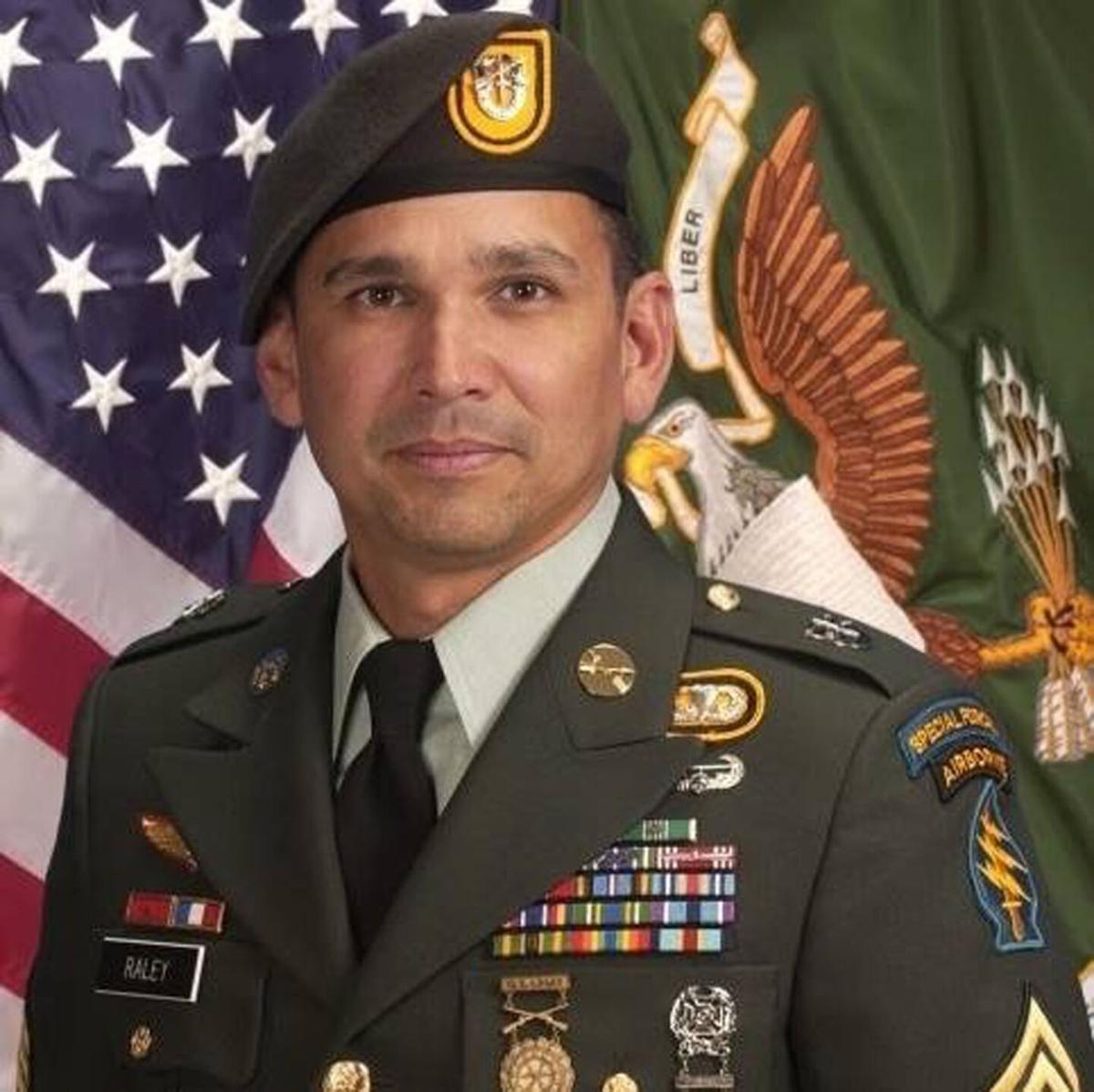 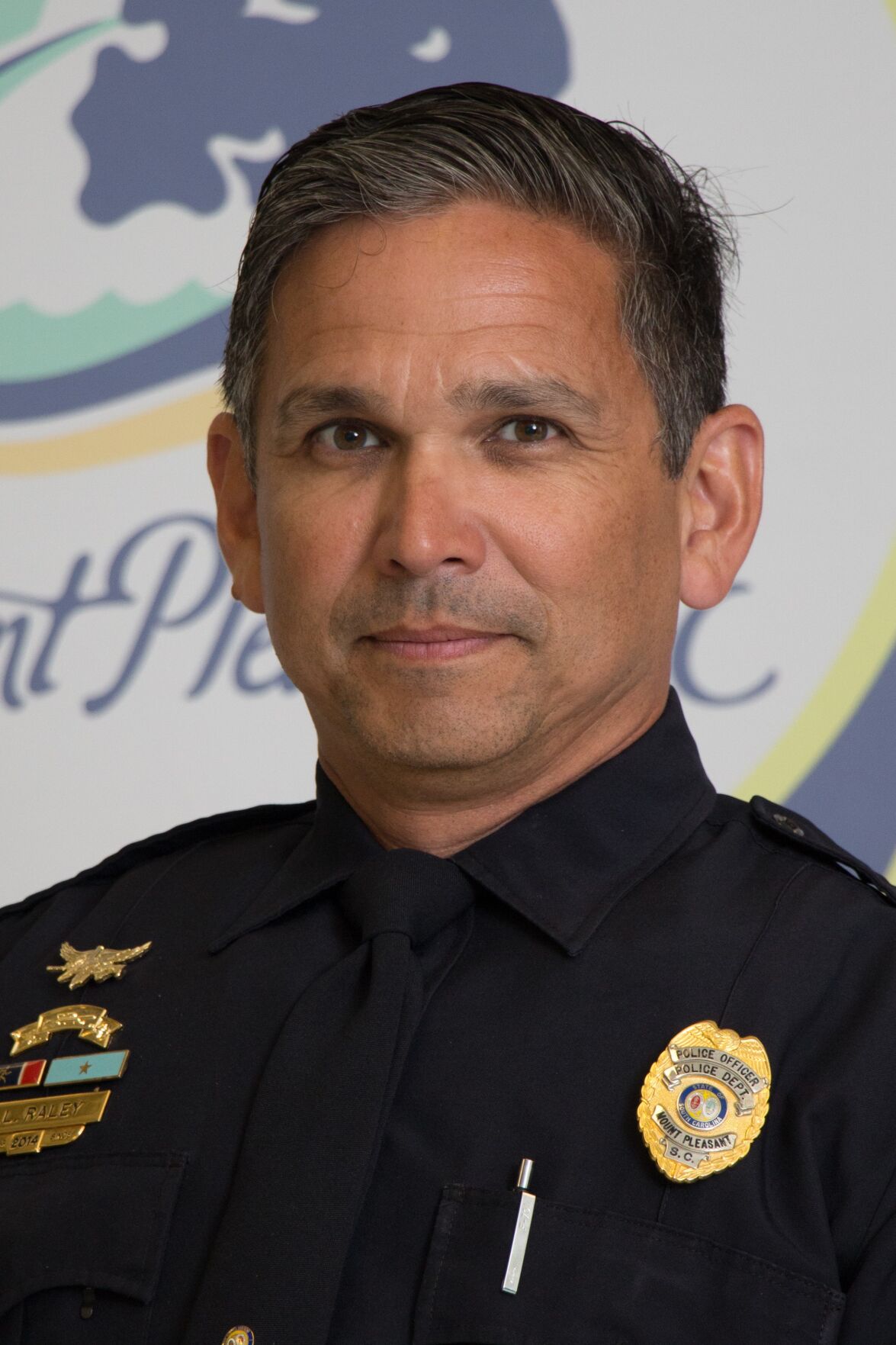 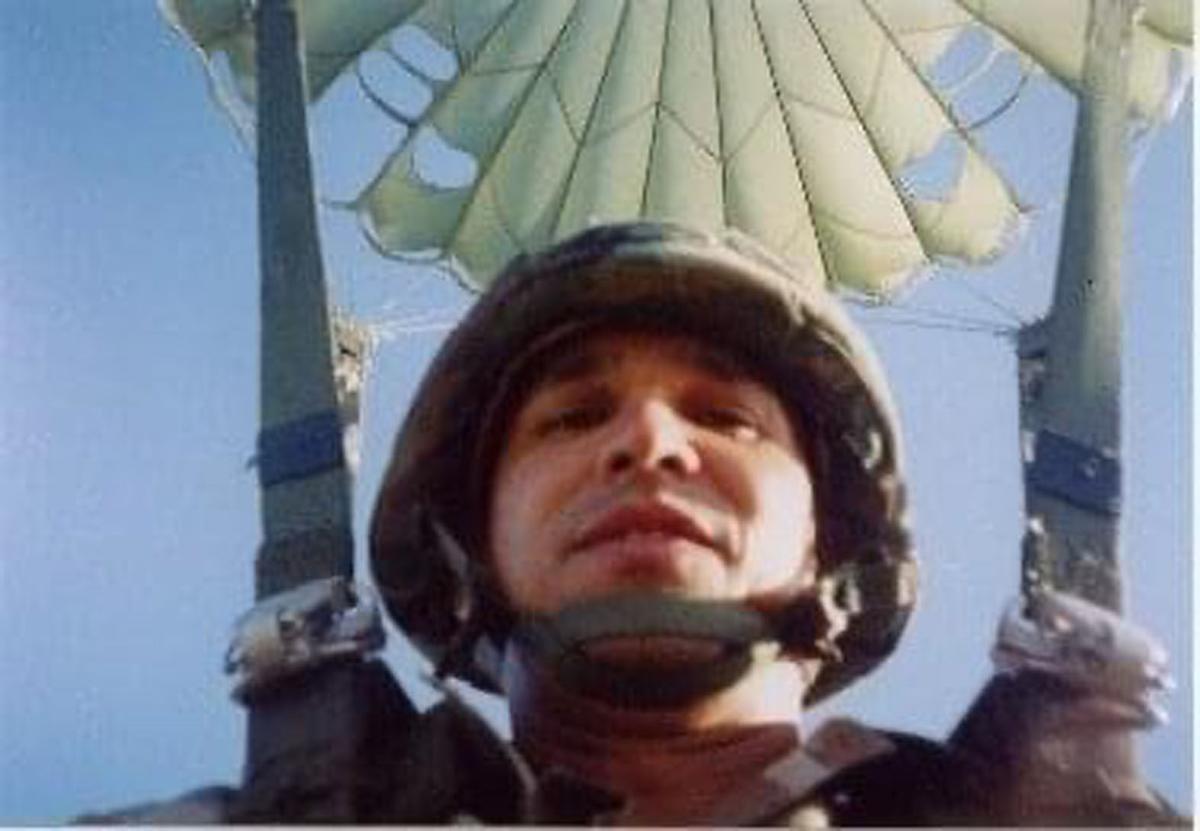 Jumping out of airplanes is sometimes part of the job. 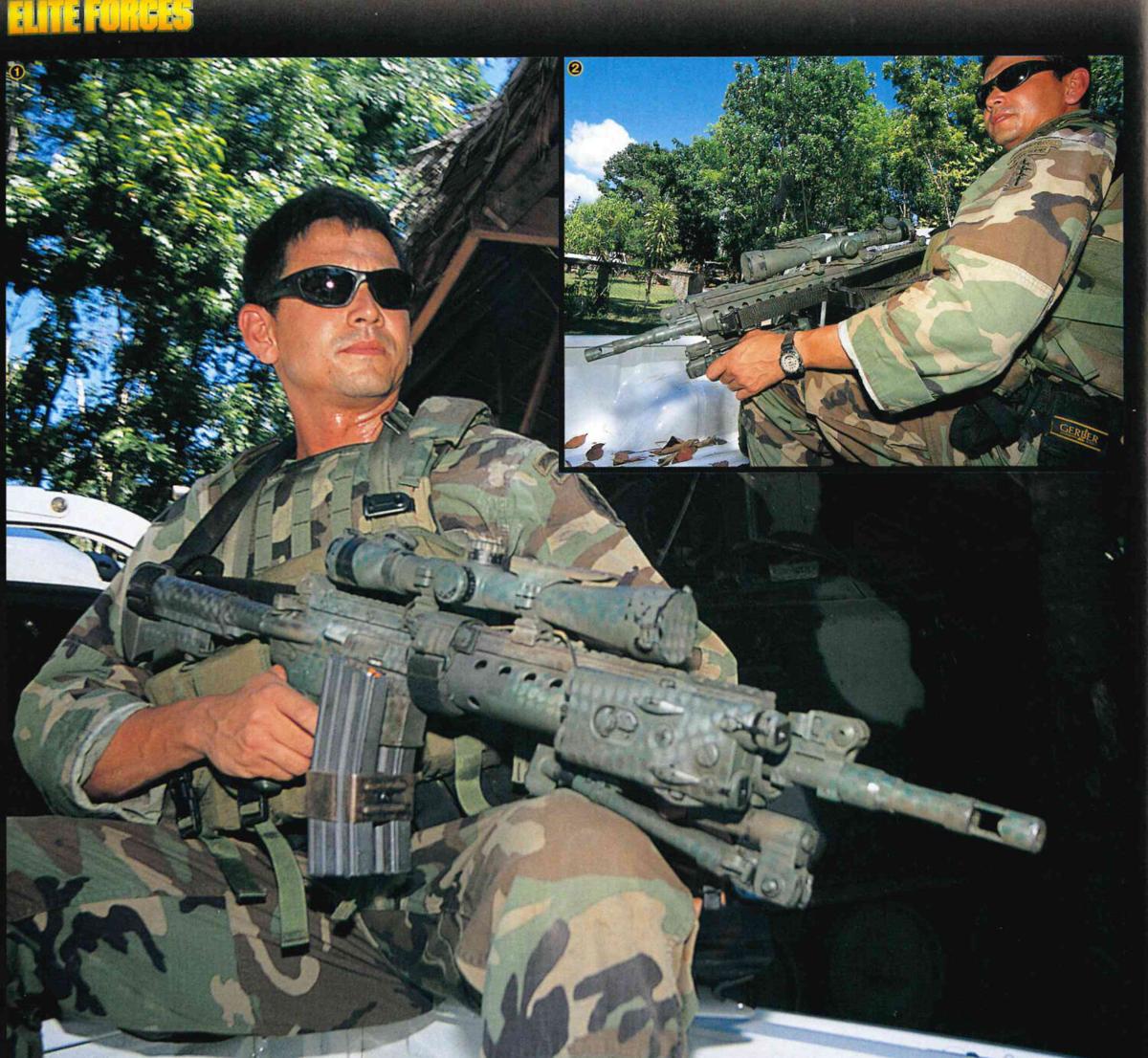 In top photo Darren Raley is featured in an Elite Forces magazine in Japan, In the lower left photo he is working as a communications expert. Lower right, he is in full gear. 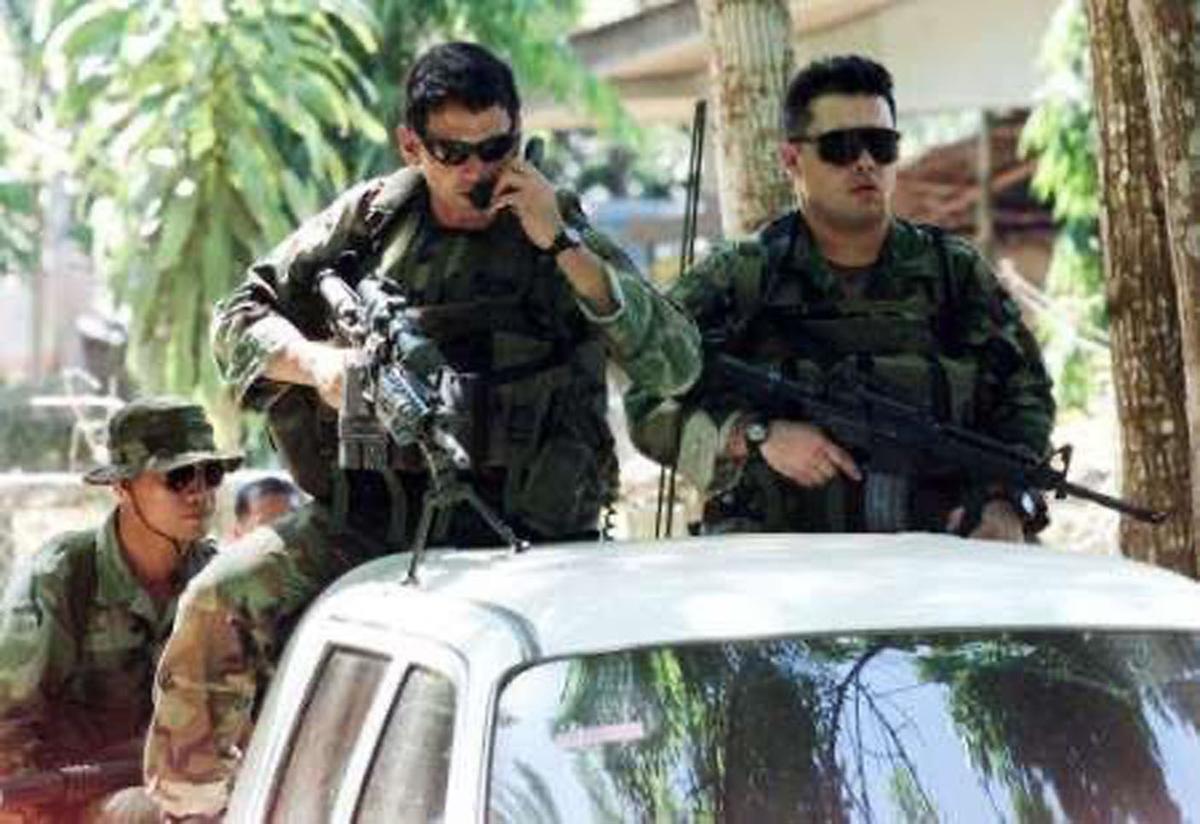 Darren Raley at work as a communications expert. 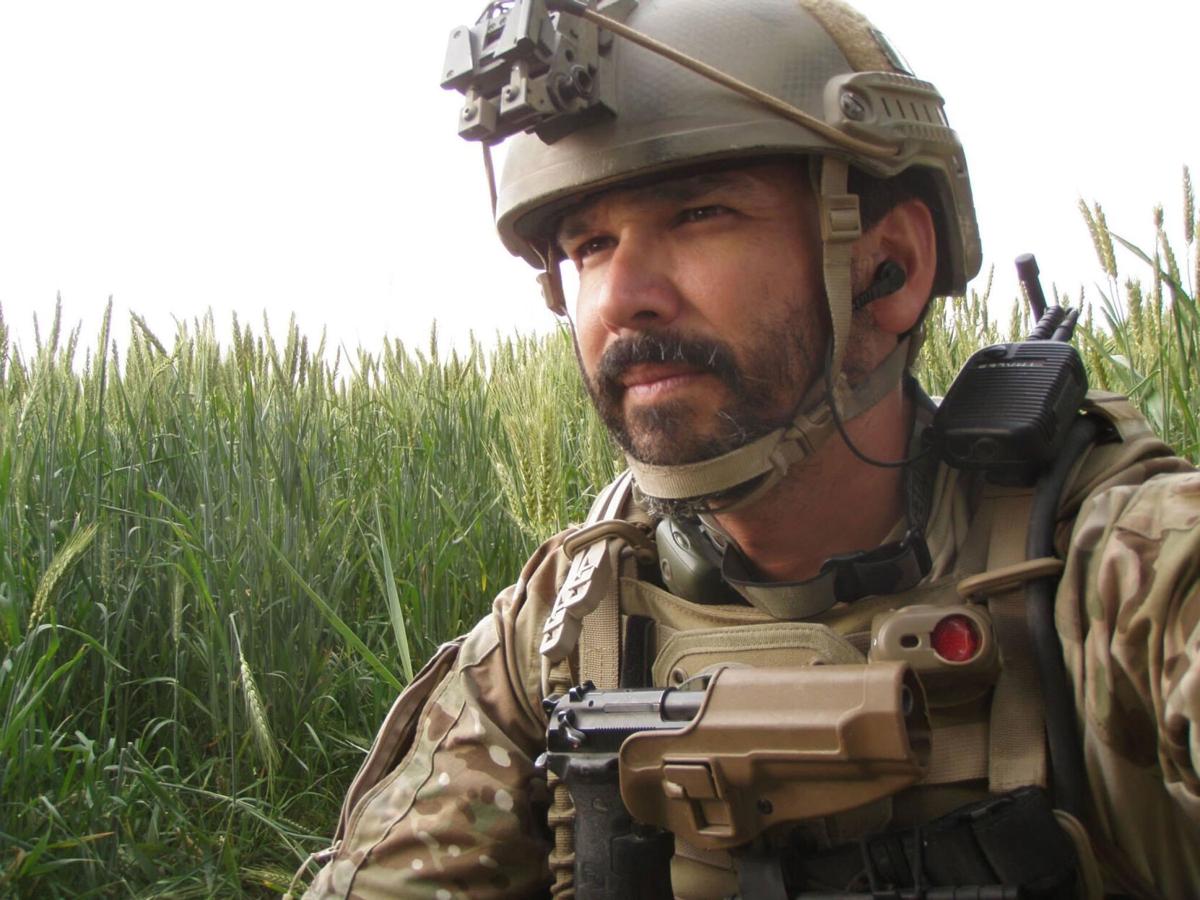 Jumping out of airplanes is sometimes part of the job.

In top photo Darren Raley is featured in an Elite Forces magazine in Japan, In the lower left photo he is working as a communications expert. Lower right, he is in full gear.

Darren Raley at work as a communications expert.

Most people have a moment in their lives when they are forced to “grow up.” Sometimes it’s going to college. For others it’s when they have their first child or a first job. For Darren Raley it was his first combat experience.

Raley, 52, is a sergeant with the Mount Pleasant Police Department and a member of the SWAT team as a sniper, which he said involves “expert observation and being able to sit in a single spot without being noticed, observing whatever your objective is.”

He grew up around military men. His father was a career Navy radioman. His grandfather was a Marine, uncle was in the Air Force and great-uncle in the Army. His path took him on the one he knew the least about – the Army. It turned out to be the right one as he ended his military career after spending 18 years in the Special Forces as a Green Beret.

Born in Hawaii, his family moved to Guantanamo Bay, Cuba when he started school and then ended up in Key West as a teen. “I was around the Navy all the time, watching jets flying, seeing the ships come into the harbor.” His dad, Elwood, would bring home a Morse code keypad which he played with. “I thought it was cool.” He went to school on the military bases, which he described as “very strict” as the teachers were from the Department of Defense.

On Key West he was starting down a path of getting into trouble. “Growing up on a small island, there is either tourism or trouble,” he said. He got married young, at 18, and had a child and decided to join the Army at the age of 19 in April 1989. “I wasn’t concentrating on my future. I needed to do something,” he said.

Two months after becoming an air defense crew member for Stinger missiles with the 7th Infantry Division he was deployed on his first combat mission, Operation Just Cause, in Panama, fighting the Panamanian Defense Force. This was an operation to depose general and dictator Manuel Noriega.

“We were masters of the night,” he said, describing how the soldiers had night vision goggles. “If there was a light we shot it out.”

It was here that Raley, “Grew up fast.” He said he remembers the Apache helicopters shooting at the enemy. “Seeing casualties for the first time in my life. I did not sleep for the first three days, literally. I don’t even remember going to sleep, I just passed out.”

“Seeing all that brought the reality – this is war, this is what I joined to do. I accepted that.”

One of the things he discovered during this early combat experience was “I operate really, really good under stress.” He threw his energy and enthusiasm into physical training and was recognized as a “top gun in our battalion through competitions.”

“I’m very competitive. I don’t like to lose. I will push myself to the point where I’m pushing my commanders.”

Raley said as a teen “I was always competitive. I ran in high school. I would run 10ks, half marathons, that was my get away growing up when I was stressed. The military gave me more direction to use that.”

However, things went sour. During his initial three years in the military he ended up with a divorce. “Military life wasn’t for them.” He said he felt like the service wasn’t supportive during this difficult time in his life. So, he left the Army.

Two years later he met his second wife and had another child. Wanting to take better care of his family he rejoined the military and was stationed in Fort Campbell, Kentucky. in another Air Defense unit. “I brought that same competitive attitude to that unit.”

After a year Raley said “I felt like I needed more. I was always an excellent shot. I went into a shooting program for the division and became a competitive marksman with the 101st Airborne.” However, as rewarding as that accomplishment was “that still didn’t feed my drive to excel at something.”

One day he went to a Special Forces briefing and “watched the video, listened to the NCO give his brief, and the lightbulb just turned on.” He decided to prepare for the selection process for the Green Berets.

“I was about four miles from where I worked, so I stopped driving and walked with a rucksack on that weighed 50 pounds,” he said. Eventually “I started running with that rucksack. Everywhere I went I ran. And then I would repeat.”

Raley began the selection process in 1996 at Fort Bragg, NC. “Selection is 21 days of pure sacrifice. Mind over matter.” He said you may think you want to quit “a thousand times a day” but you never say the words aloud.

The last week of selection involves working in a team. Raley said “you are paired up with 11 other guys. Special Forces works in 12 man teams and you help that team accomplish the mission.” Each soldier is called on to be a team leader “the one I had was resupplying another team with ammunition.” He laughed and said, “This ammunition was the heaviest ammunition I’ve ever carried in my entire life. An ammo can (container) you normally pick up is a good weight – this had WEIGHT!”

He said he had to figure out “How to carry these cans along with a 70 pound rucksack, carrying a rifle. The 70 pounds was dry weight, that doesn’t count your food and water.”

He figured out that his gloves were the key to solving his difficulty. He needed something to lock the weight into so he put twigs down inside his gloves so the handle sat perfectly within them and held the can in place so he didn’t have to squeeze tightly. The point, he said, was to test problem solving ability. “How you negotiate stress and push past your limitations.”

The last event was a road march of an “unknown distance” which started at sunset and continued all night long until the sun came up. “I remember falling asleep walking. You know you’ve been walking while asleep when you start walking into tree branches.”

At the end the men were called out into formation and split the men into two groups and one group is marched off. “Out of almost 400 people 30 of us made it.”

“If it (being a Green Beret) is not in your heart, you will not make it,” Raley said. Two years of qualification courses and training followed and Raley became a communications and intelligence expert.

He was deployed to the Basilan Island in the Southern Philippines after 9/11 to fight a terrorist group, Abu Sayyef. This group was notorious for taking hostages, including two American missionaries who were on an anniversary trip at a resort.

In the Philippines, American forces had to work with the Philippine Armed Forces. Raley said it was frustrating trying to flush out the terrorists because, “we knew where they were almost every time and it seemed like every time there was an operation they would move because somehow the information go leaked out.”

Raley said the lack of training and resources hampered the operation. “The way the Philippine Army fights I’m surprised I came out alive,” he said, adding they had “Vietnam era equipment.”

The most difficult of his combat deployments were in Afghanistan. Which he described as hard both physically and emotionally. He had 13 combat tours there. He was quiet and thoughtful describing a time when a child who drowned was brought to them “still warm, with a weak pulse. She had been pulled out of the water and expired right in front of us.”

Raley said the Taliban often used women and children as shields and would dress like women to disguise themselves. “We didn’t act as we would have in the States.” He said everything and everyone was a potential threat. “That got to me. You would have workers on the base with you, pay them in cash. They leave the base, maybe they want to send some money home, and they don’t return. Then you find their head sitting at the front gate. You don’t trust nobody.”

He said his early experiences in Panama had a similar dynamic as soldiers were not fighting a force in uniform. Anyone could be the enemy. There could be no “civilians” in the mind of a soldier.

Raley’s second marriage ended in divorce during his second time in the service. However, the third time was the charm. While in Okinawa, Japan he met his present wife of 16 years. “She knew how to tolerate the military,” he said.

Despite the hardships and sometimes horror of combat Raley has many funny memories as well.

“I spent time in maritime operations and I was up in a place called Deception Pass in Puget Sound where the current changes fast. During ebb current I was tossed in the water and we were supposed to swim this pass as quickly as we could. The guys following us on the safety boats, they started giggling, and I’m thinking what are they laughing about? Then I hear a splash and I think they’re throwing things at me, trying to make me think there’s something in the water. Then they’re giggling some more. So finally I hear a really good splash this time and I look back and there’s this seal. It was following me. I’m wearing all black with fins. And the guys go ‘it must be mating season.’”

What would he say to someone thinking of joining the military? “Do it. That’s where they will find themselves. Find out their boundaries and limitations.”

Finally, when asked what he missed about the service his answer is surprising.