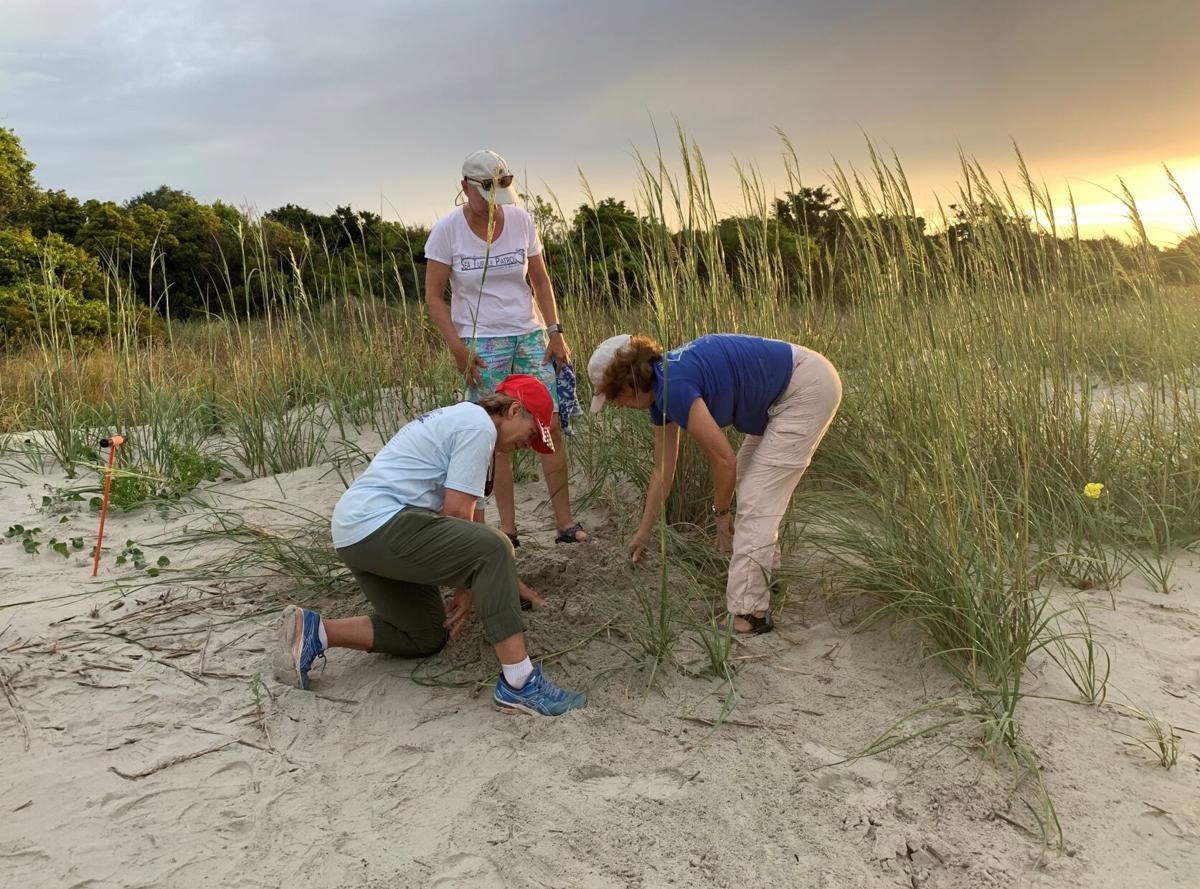 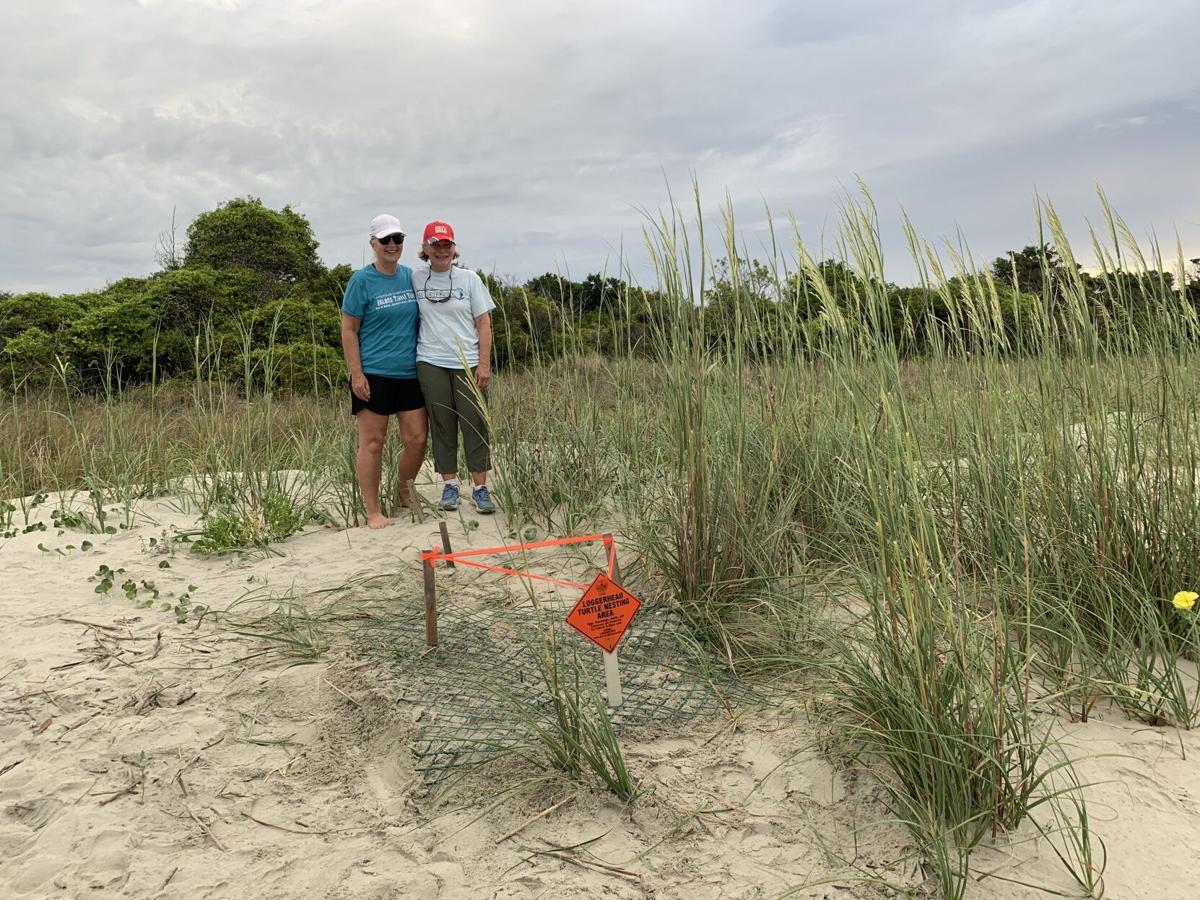 Natalie Podnar and Raye Ann Osborne, volunteers with the Island Turtle Team, stand next to the nest they discovered on June 8. 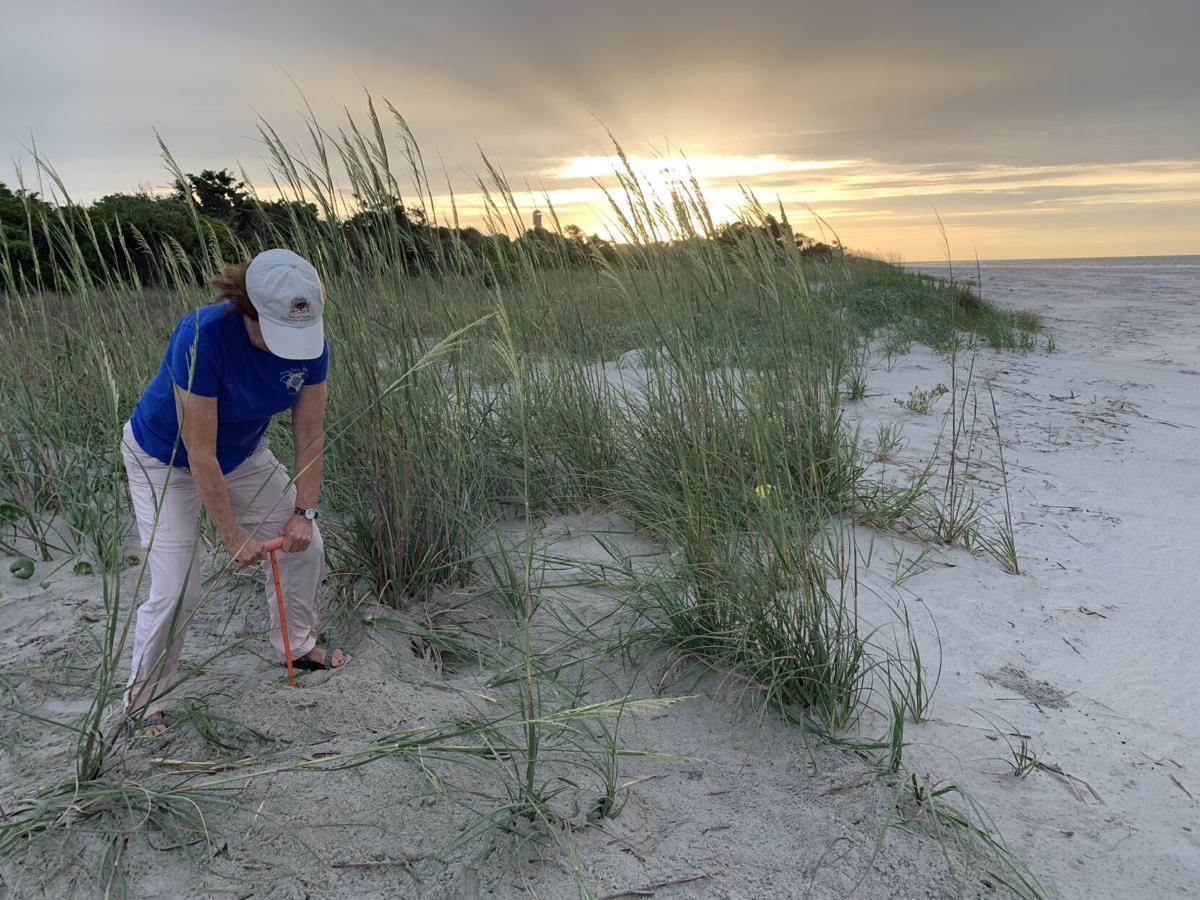 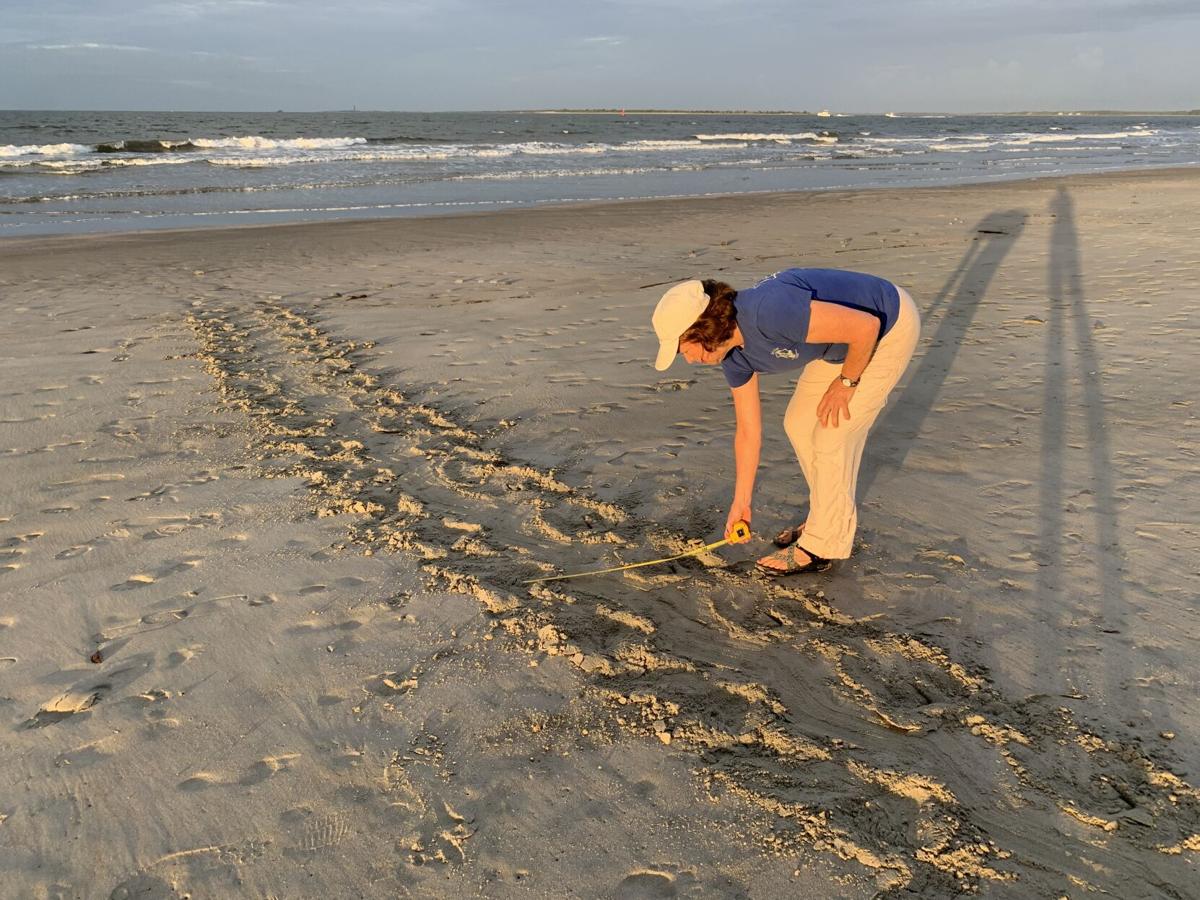 Mary Pringle, team lead for the Island Turtle Team, measures the size of the turtle tracks to determine its size. 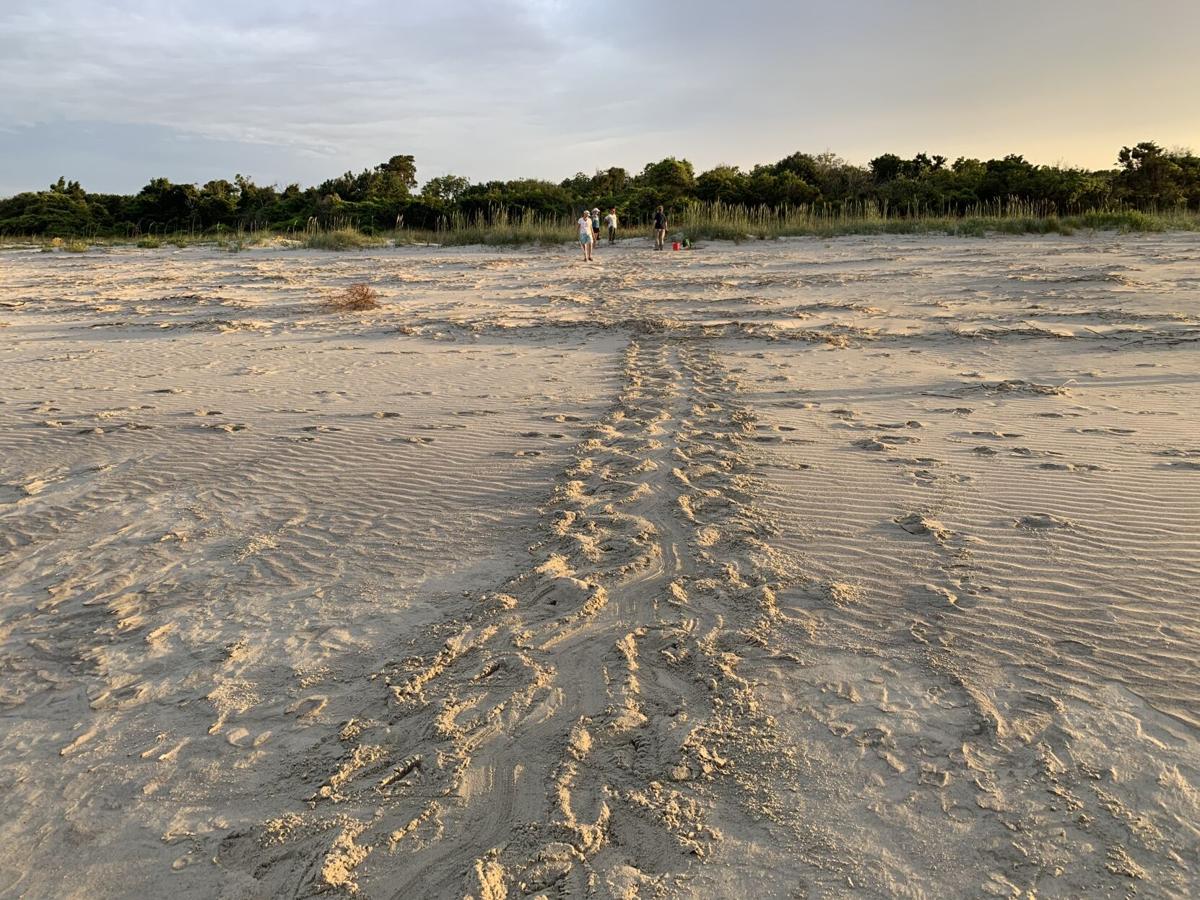 Loggerhead sea turtle tracks were spotted in the sand at Sullivan's Island on June 8.

As the sun rose on Sullivan’s Island on June 8, characteristic loggerhead sea turtle tracks were spotted from the tideline to the dunes.

The loggerhead sea turtle laid the eggs at an ideal spot in the dunes near the station 17 marker. If that wasn’t the case, one of the permitted Turtle Team members would have collected the eggs and moved them to a safer spot. Sometimes the sea turtle lays the eggs in a vehicular path or a flat area that could flood.

“It’s hard for them (the sea turtles) to drag their bodies all the way up to a good place to nest. Sometimes they nest in a flattened area where the eggs would be destroyed,” said Mary Pringle, project leader with the Island Turtle Team.

Pringle is one of eight members in the group that is permitted by the South Carolina Department of Natural Resources to do hands-on work with the nests. This includes probing the sand to detect eggs and moving the eggs if necessary. They are also permitted to rescue hatchlings that are stuck in the nest three days after the main hatch.

Island Turtle Team members scour the beaches for turtle tracks each morning at sunrise. The group of 170 volunteers is divided by location on the beach and day of the week. Only the lucky ones come across a nest.

There are three nests at Sullivan’s Island and seven at the Isle of Palms, as of June 11. Last nesting season, there were 48 nests between the two islands. Pringle expects around 40 nests this season, which is an average amount.

The group on Sullivan’s Island tried to determine if the same sea turtle laid the new nest as the nest from two weeks prior because the tracks seemed to be the same size.

They will have the answer when they receive results from the genetic samples they sent to a lab with the University of Georgia. When a nest is discovered, Pringle collects a genetic sample from one egg. At the end of the season, the data will determine if the same sea turtle laid multiple nests on the island and provide other information relating to the mature sea turtle.

Cape Romain National Wildlife Refuge in Awendaw oversees four nearby islands: Bull, Cape, Lighthouse and Racoon Key. These undeveloped islands have the most sea turtle nesting activity north of Cape Canaveral in Florida. So far this season, Cape Island has 296 nests and Lighthouse Island has 299, according to the Sea Turtle Nest Monitoring System.

Each nest averages 120 eggs. The amount of eggs in the newest Sullivan’s Island nest is unknown since the eggs weren’t collected and moved. The other two nests on Sullivan’s Island had 117 eggs and 83 eggs. The largest nest in the area is in the Isle of Palms with 143 eggs.

Once a nest is detected, the volunteers build a triangular barrier around the nest for protection. A plastic netting covers the sand to prevent coyotes from digging to the eggs; the holes in the netting still allow the hatchlings to emerge.

Only one out of 1,000 loggerhead sea turtle eggs survive to adulthood. When the hatchlings emerge from the nest, they have to escape predators like raccoons, foxes, coyotes and sea birds. Once in the water, birds and fish consume the small turtles.

“Now the population is rebounding when it was going down before,” Pringle said.

The Island Turtle Team is not adding new volunteers, but there are still ways beach goers can support turtle conservation efforts. When visiting a beach, properly throw away any plastic or trash. Pringle said that trash left on the beach ends up in the ocean and the turtles mistake it for the jellyfish they consume. In addition, beach goers should fill any holes dug in the sand because they can trap the little hatchlings or even a nesting sea turtle.

The next generation of sea turtles this season could start emerging by mid-July.

The typical incubation period for the sea turtle eggs is between 48 to 60 days. The eggs laid later in the summer have a shorter incubation time due to the higher temperatures.

Island Turtle Team volunteers begin monitoring the nests daily after 50 days until the hatchlings appear. Then, the sea turtles are off to find their new, permanent home in the ocean.

Keep up with the Island Turtle Team at bergwerfgraphics.com. Visit seaturtle.org and go to resources and nesting to view local statistics of the nesting season.