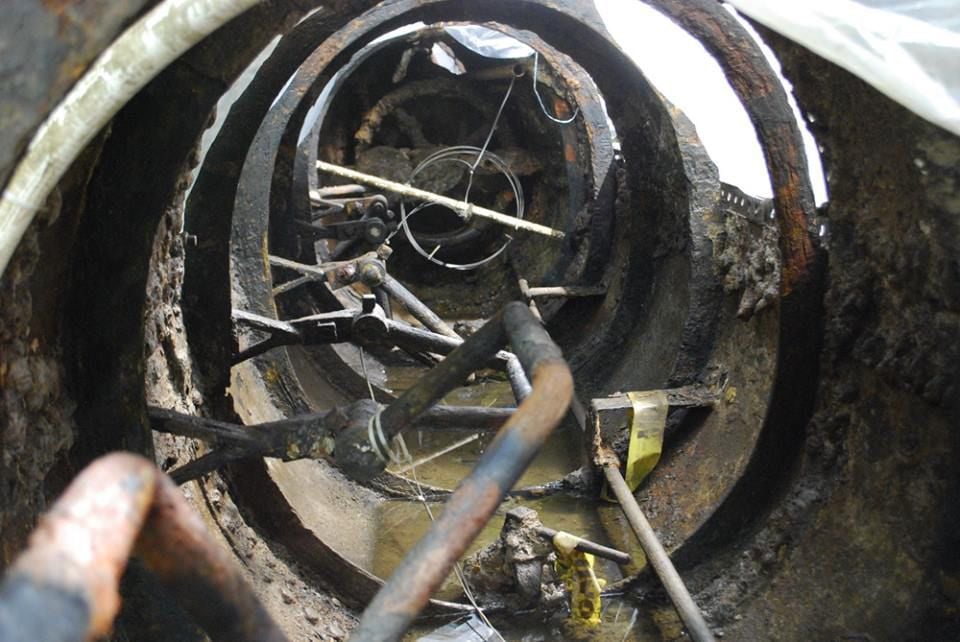 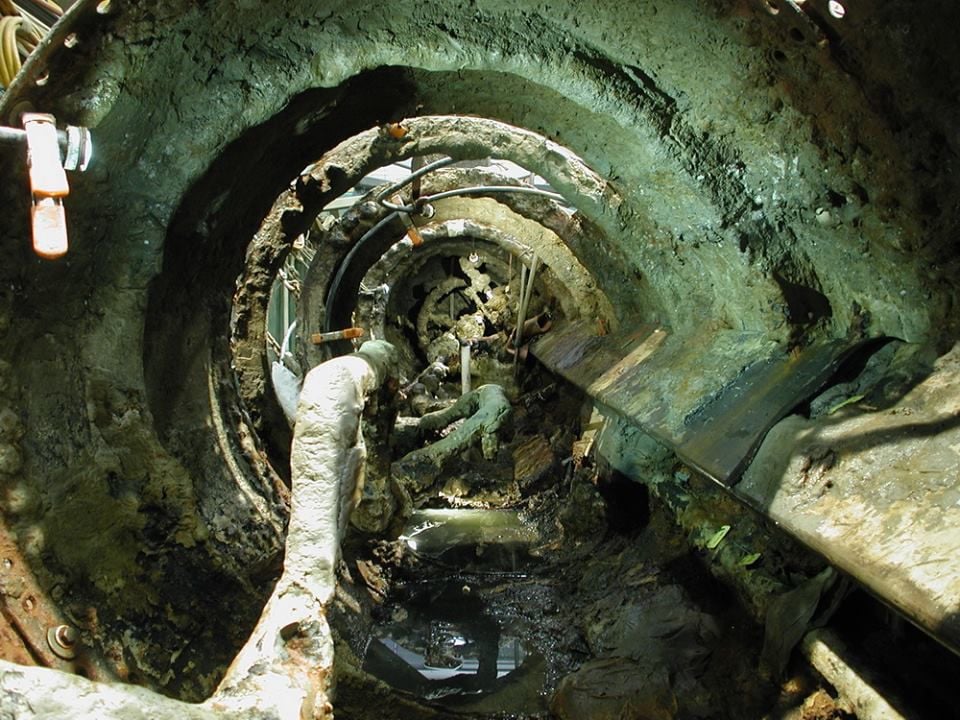 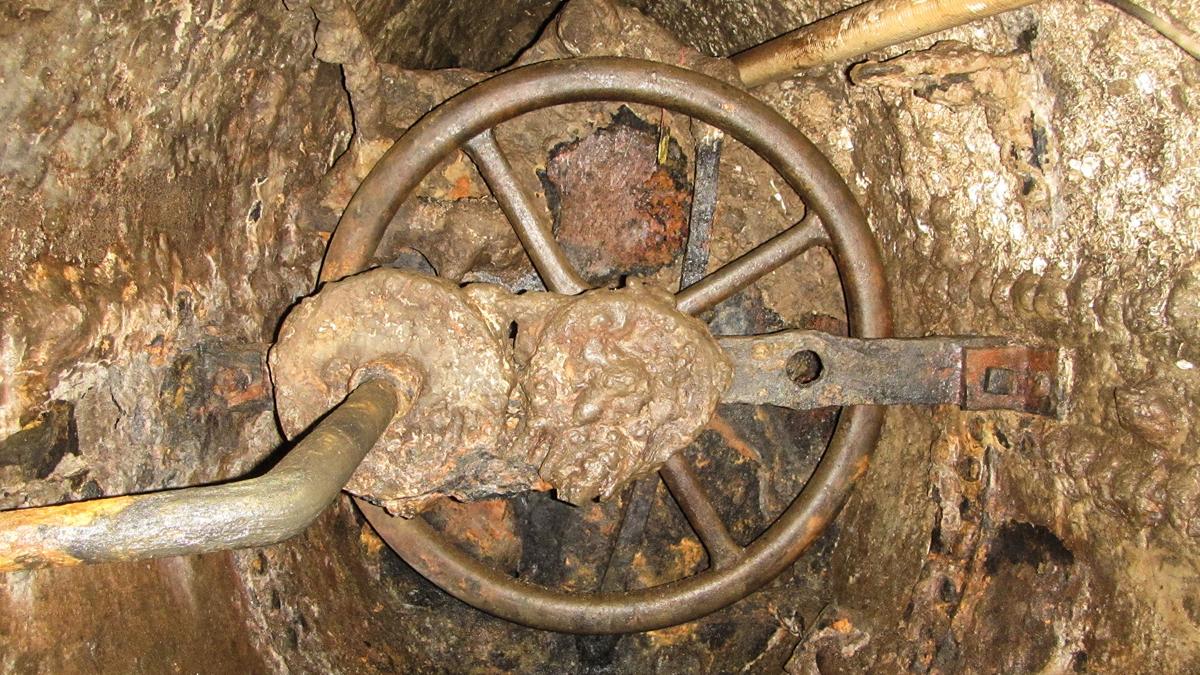 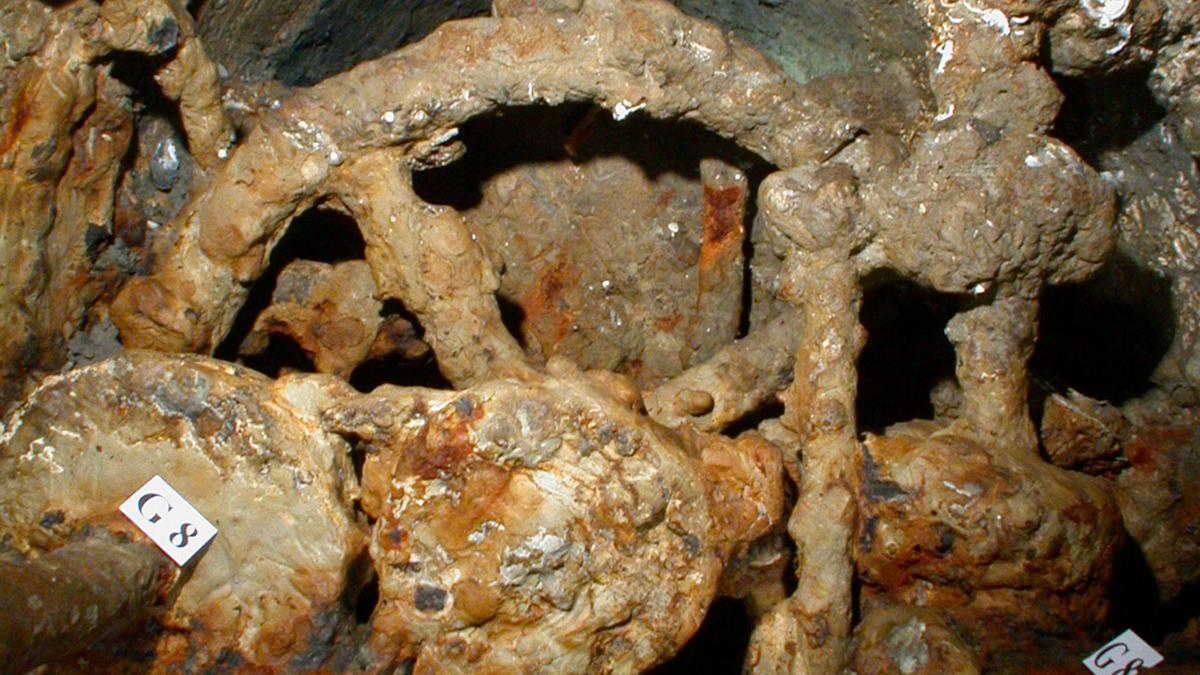 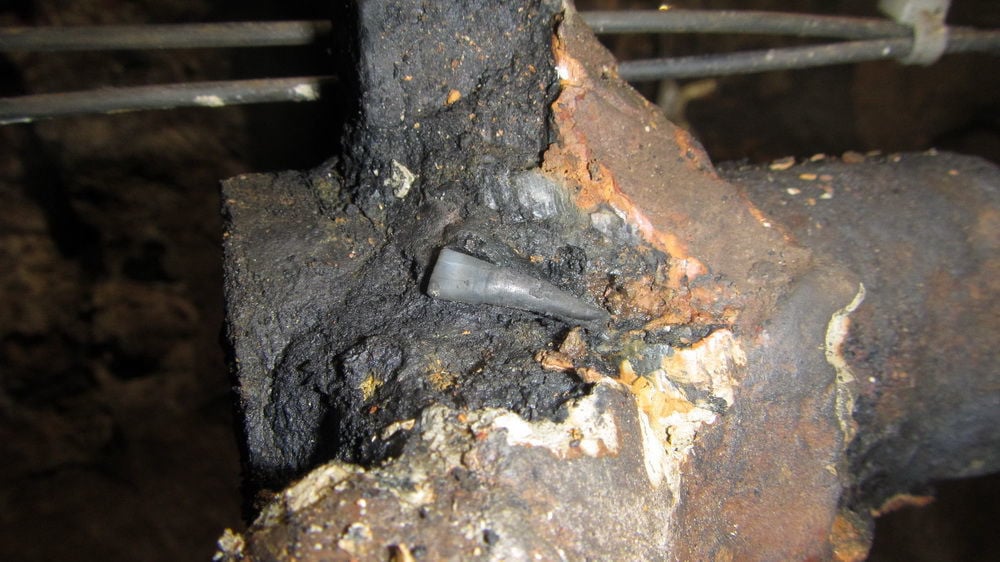 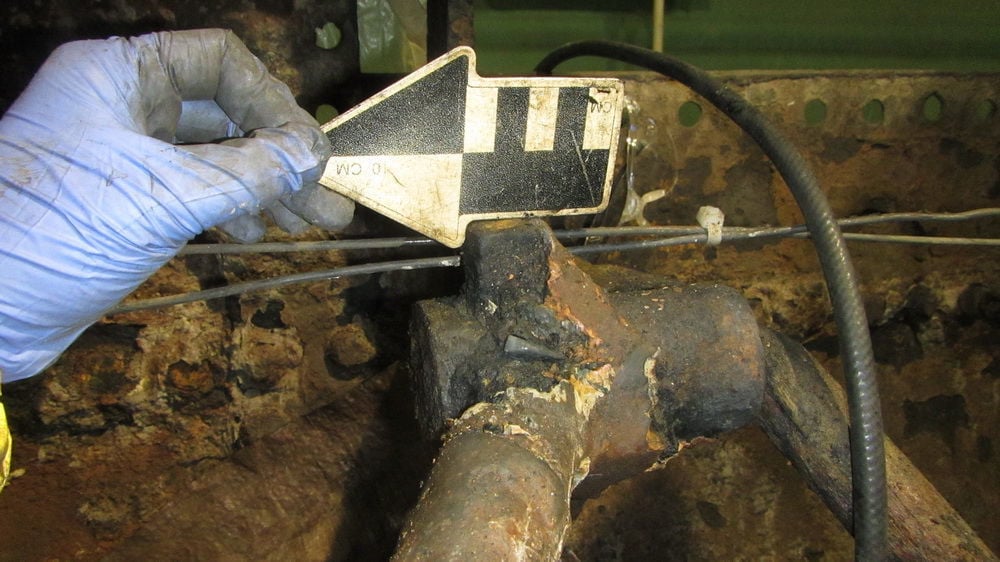 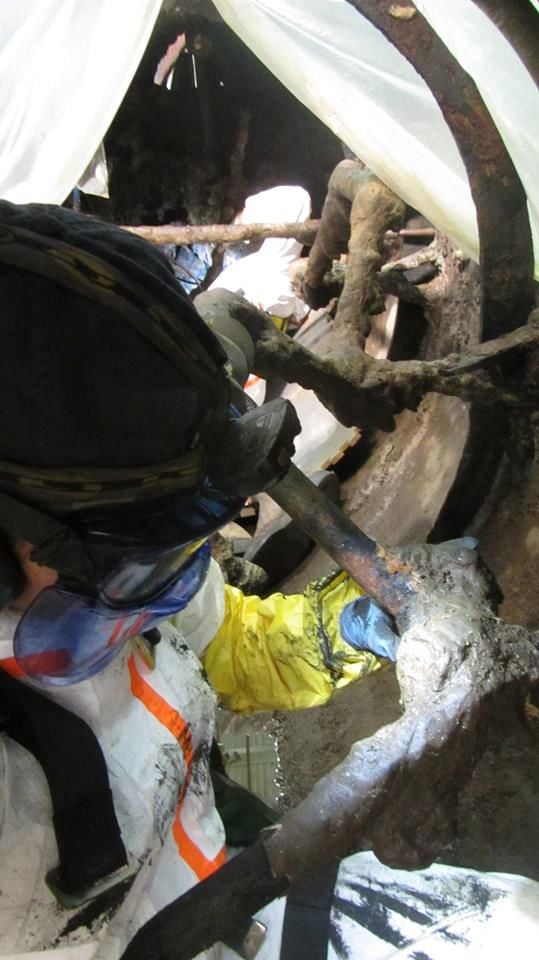 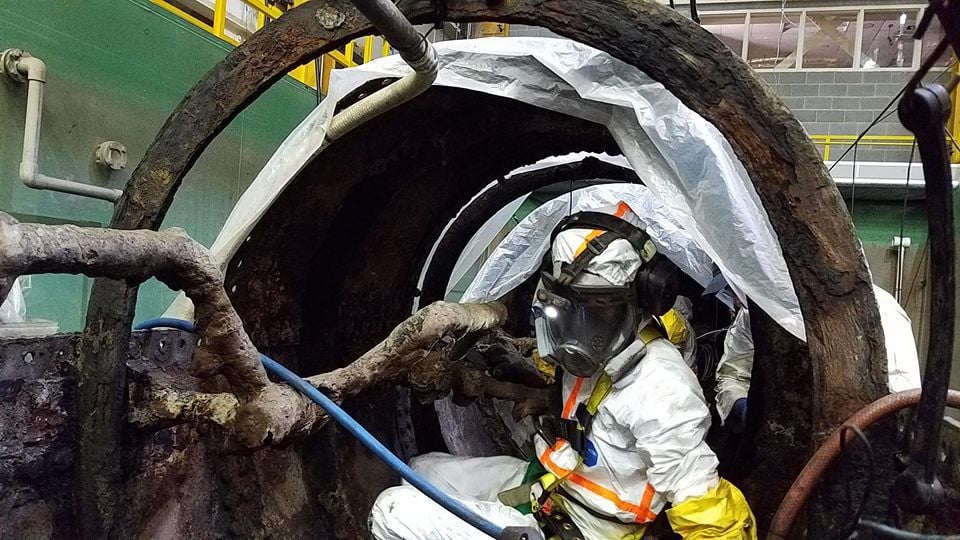 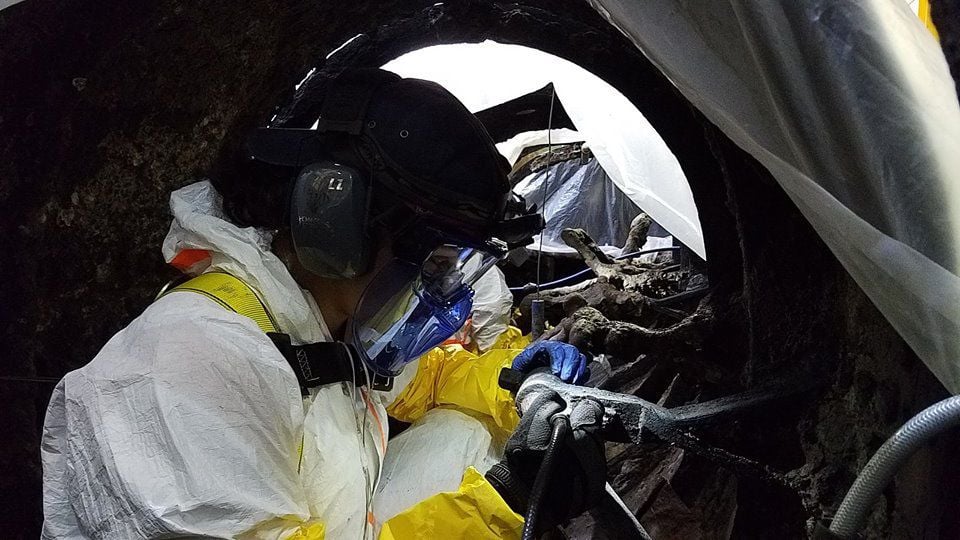 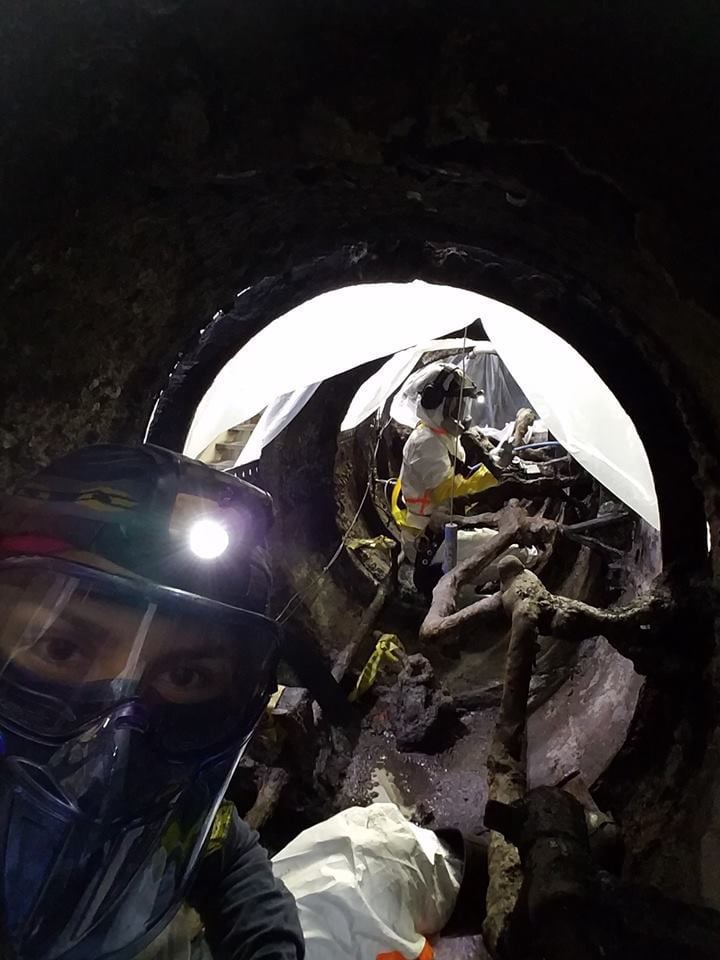 It is no secret that the crew compartment of the H. L. Hunley, the world’s first successful combat submarine, was small. But conservators working to save the pioneering vessel have a new understanding of just how cramped and intimidating it must have been for the eight-man crew in 1864 when they cranked the Hunley into world history.

Working in the small confines of the roughly 4-foot tall hull, scientists are slowly breaking off the concretion – a layer of sand, sediment, shells and corrosion products – that built up slowly over time while she was lost at sea for over a century. The concretion completely masked the original surface of one of maritime lore’s greatest artifacts as well as many of its finer operational features.

“The work can be exhausting, but I love this job. I get to watch the submarine come out of its shell and be one of the first people to actually see the crew compartment in over a century. It is really very exciting,” said Clemson University’s Warren Lasch Conservation Center’s Associate Director and Senior Conservator Liisa Nasanen.

The delicate effort to clean the crew compartment has already yielded some interesting finds:

Human Remains Found: A tooth was found in the concretion on crank position number 3, where it is believed crew member Frank Collins sat. His remains were buried in 2004 alongside his crewmates and others that lost their lives in the testing and development of the Hunley. At the time of his burial, several teeth were missing from his cranium. Forensic analysis of the skull indicated the teeth were lost after his death from decomposition, meaning the discovery of more human remains was not a totally unanticipated find.

Operational Discoveries: Cleaning the inside is offering a greater understanding of the vessel’s overall operation. The Hunley’s design was more sophisticated and dynamic than originally thought. The flywheel that powered the propeller can now be seen as a clever piece of engineering. It has a system of different size gears that helped enhance the output of the crank-generated power, helping maximize the impact of the crew’s hard work.

Practical Design: The iron crank system was designed to address the vigorous challenges of cranking. Cranking for the length of time needed to reach the enemy target ship was strenuous work and no doubt caused muscle fatigue with blisters and sores. It appears a thin metal tube was wrapped loosely around the crank to allow for easier work. The tube was also covered in a cloth material, likely meant to soften and alleviate the rub on the hands.

Until recently, the concretion completely covered the vessel both inside and out. It is being removed so that a conservation treatment can be completed to ensure the submarine is preserved for our generation and the ones to come. It has been a multi-year process with several different phases.

First, the exterior of the submarine was cleaned of this encrustation. Then, in 2016, scientists moved their work to clearing it off the interior. They are hoping once the submarine is completely uncovered it will help offer a better understanding of the events that led to the disappearance of the submarine and her eight-man crew.

“We are finally getting to see many previously hidden details of both the hull and the mechanisms the crew used to operate the submarine the night of the attack. These new clues will likely prove essential to our investigation to understand what really happened to the Hunley,” said Clemson Archaeologist Michael Scafuri.

Given the extreme cramped confines of their workspace and challenging logistics, the deconcretion effort has not been going as quickly as once hoped. Scientists follow a sequence that starts with draining the 75,000-gallon conservation treatment tank that holds the submarine. Then the Hunley must be covered inch-to-inch with plastic wrap to keep it from drying out. Before entering the tank, the team gears up with protective body suits, goggles and respirators to protect them from dust and chemicals. At the end of the day, the protocol is reversed, ensuring at all times that the submarine remains wet until the tank is filled up again for the night.

The work is physically and mentally exhausting. They must stay curled up in various awkward positions for hours working in the small crew compartment. The focus required to use pneumatic chisels and small hand tools to remove the concretion can be quite stressful. One drop of a tool or slip-of-the-hand or other mistake could cause permanent damage to the fragile artifact.

Clemson University Conservator and Collections Manager Johanna Rivera-Diaz, “We are moving slowly, but we are moving. The extent of the site preparation and then limited time windows to work on the sub can be frustrating at times. Still, at the end of the day, the safety of the team and the submarine must always come first.”

On the evening of February 17, 1864, the H. L. Hunley became the world’s first successful combat submarine by sinking the USS Housatonic. After signaling to shore that the mission had been accomplished, the submarine and her crew of eight mysteriously vanished. Lost at sea for over a century, the Hunley was located in 1995 by Clive Cussler’s National Underwater and Marine Agency (NUMA). The innovative hand-cranked vessel was raised in 2000 and delivered to the Warren Lasch Conservation Center, where an international team of scientists are at work to conserve the submarine for future generations and piece together clues to solve the mystery of her disappearance. The Hunley Project is conducted through a partnership with the Clemson University Restoration Institute, South Carolina Hunley Commission, Naval History and Heritage Command, and Friends of the Hunley.