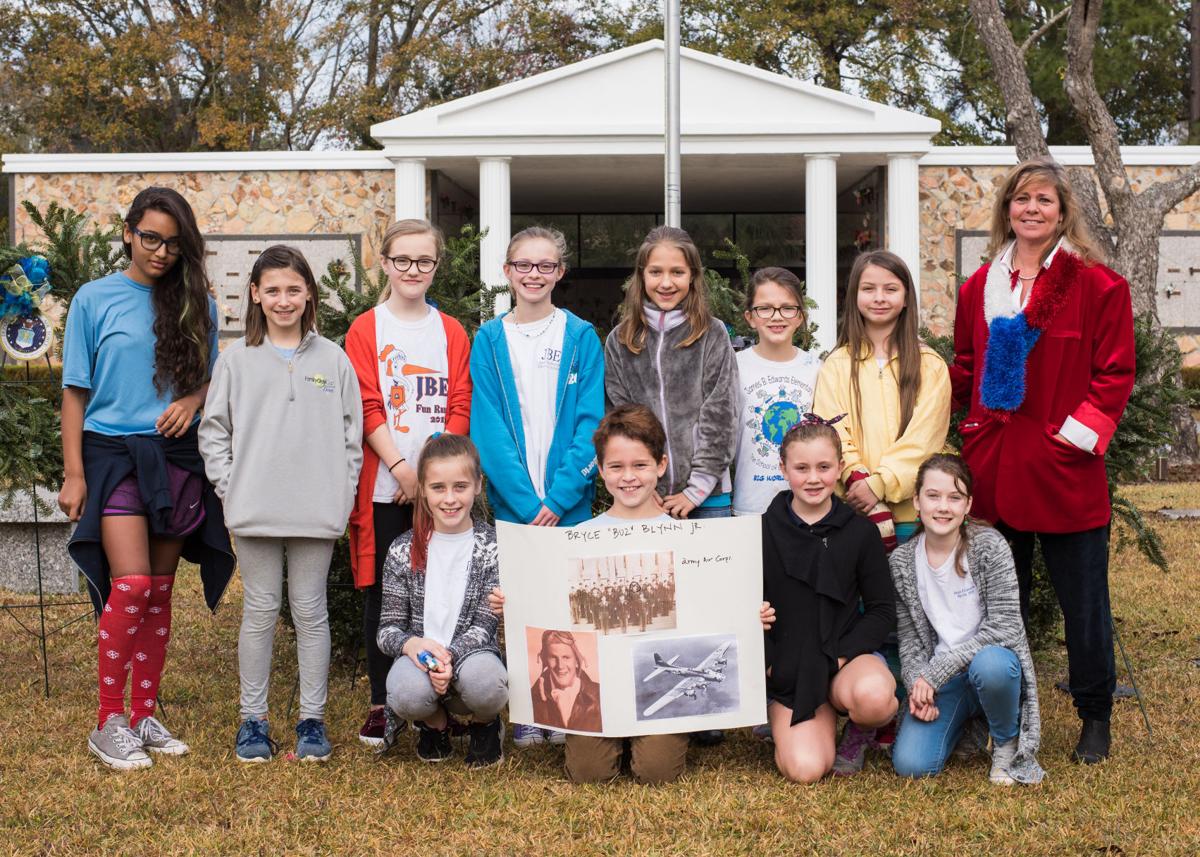 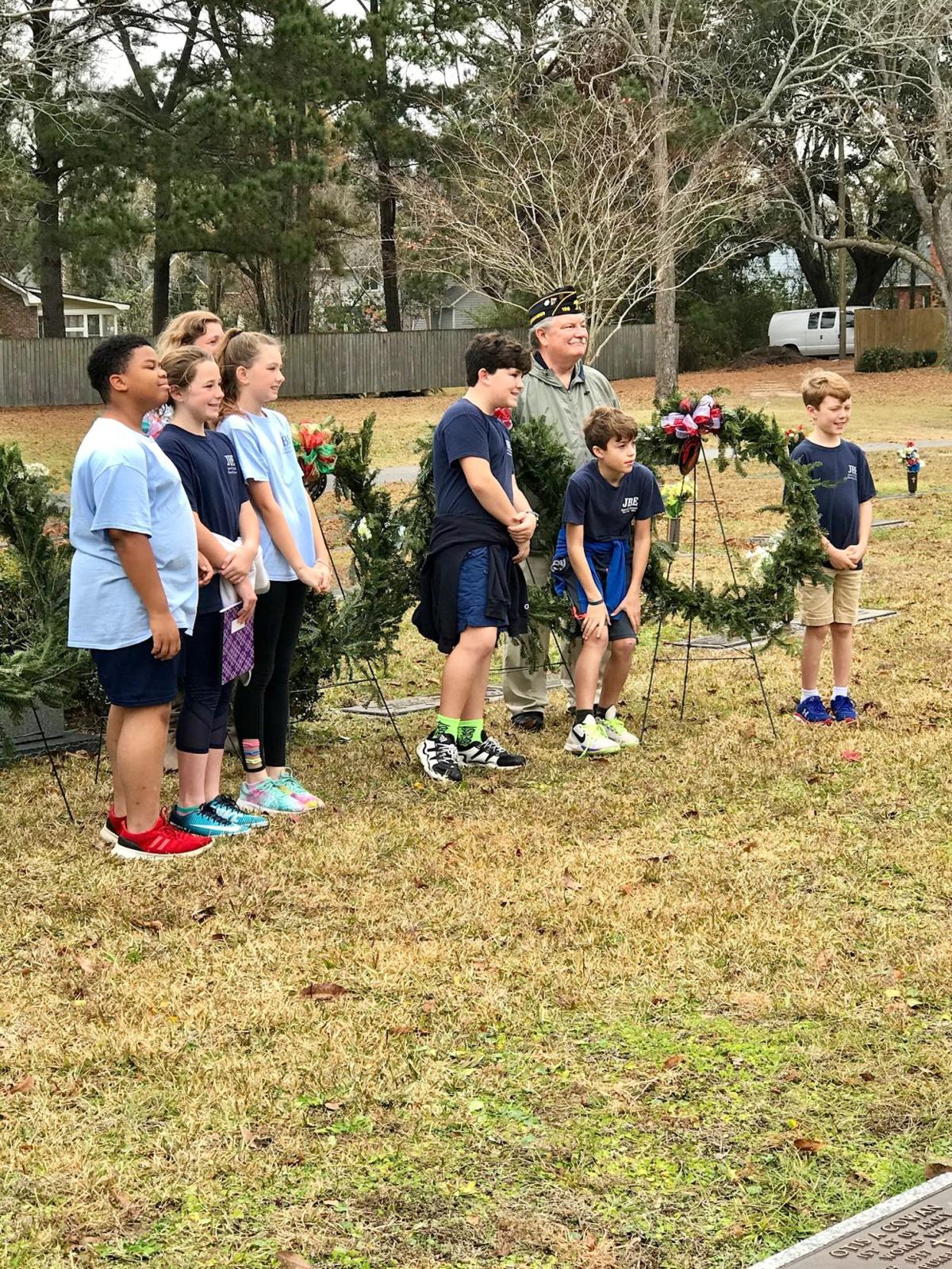 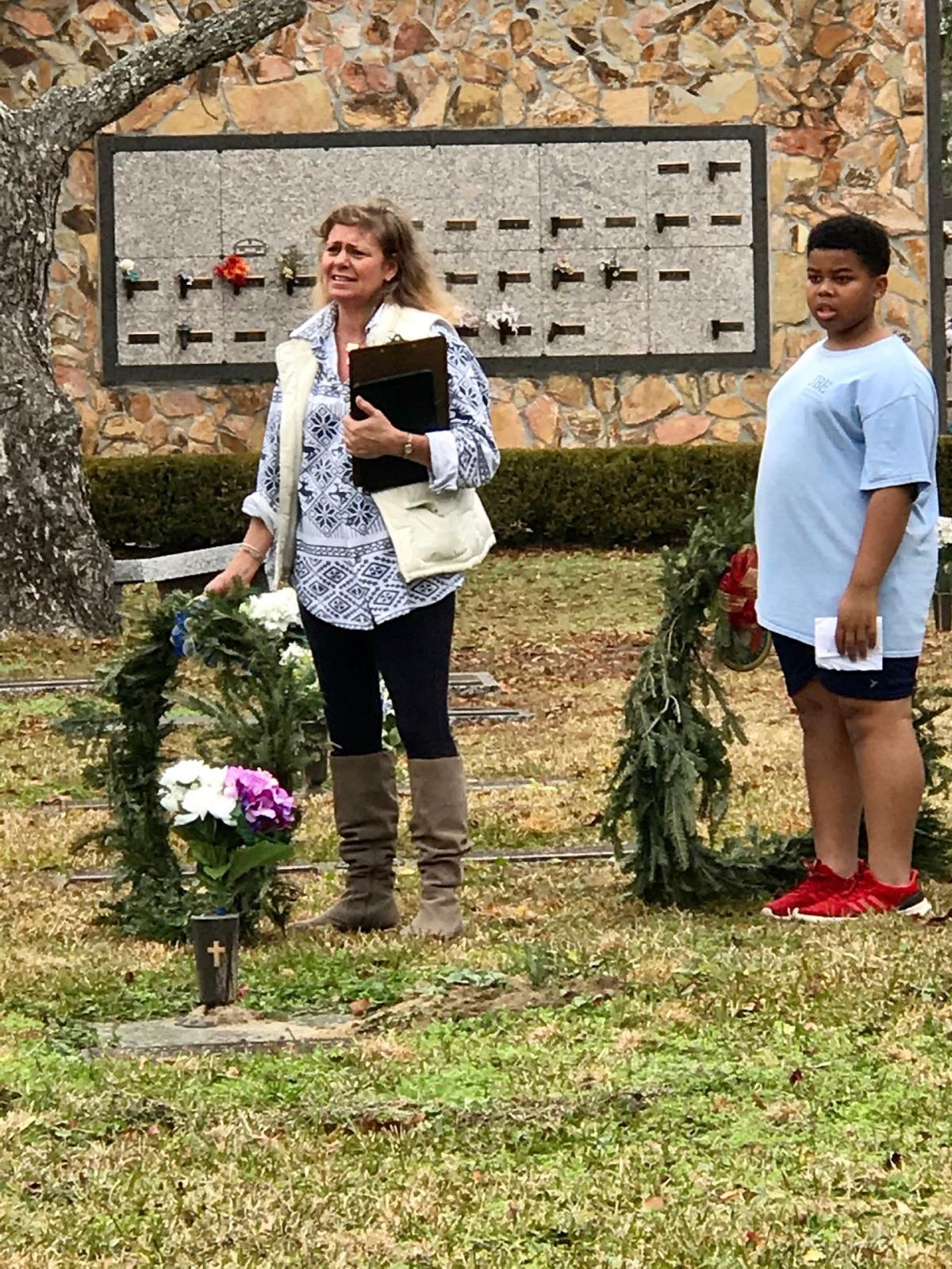 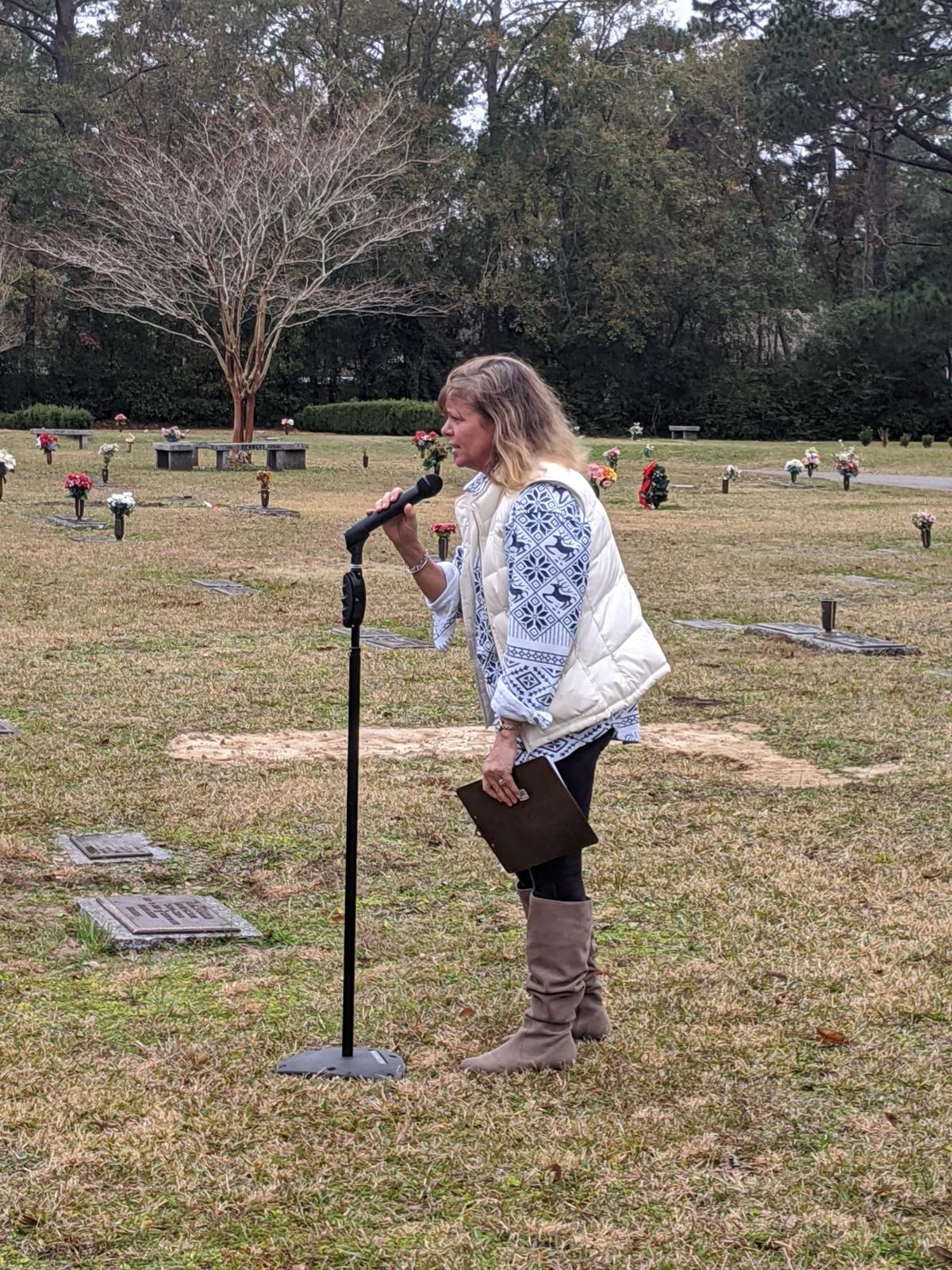 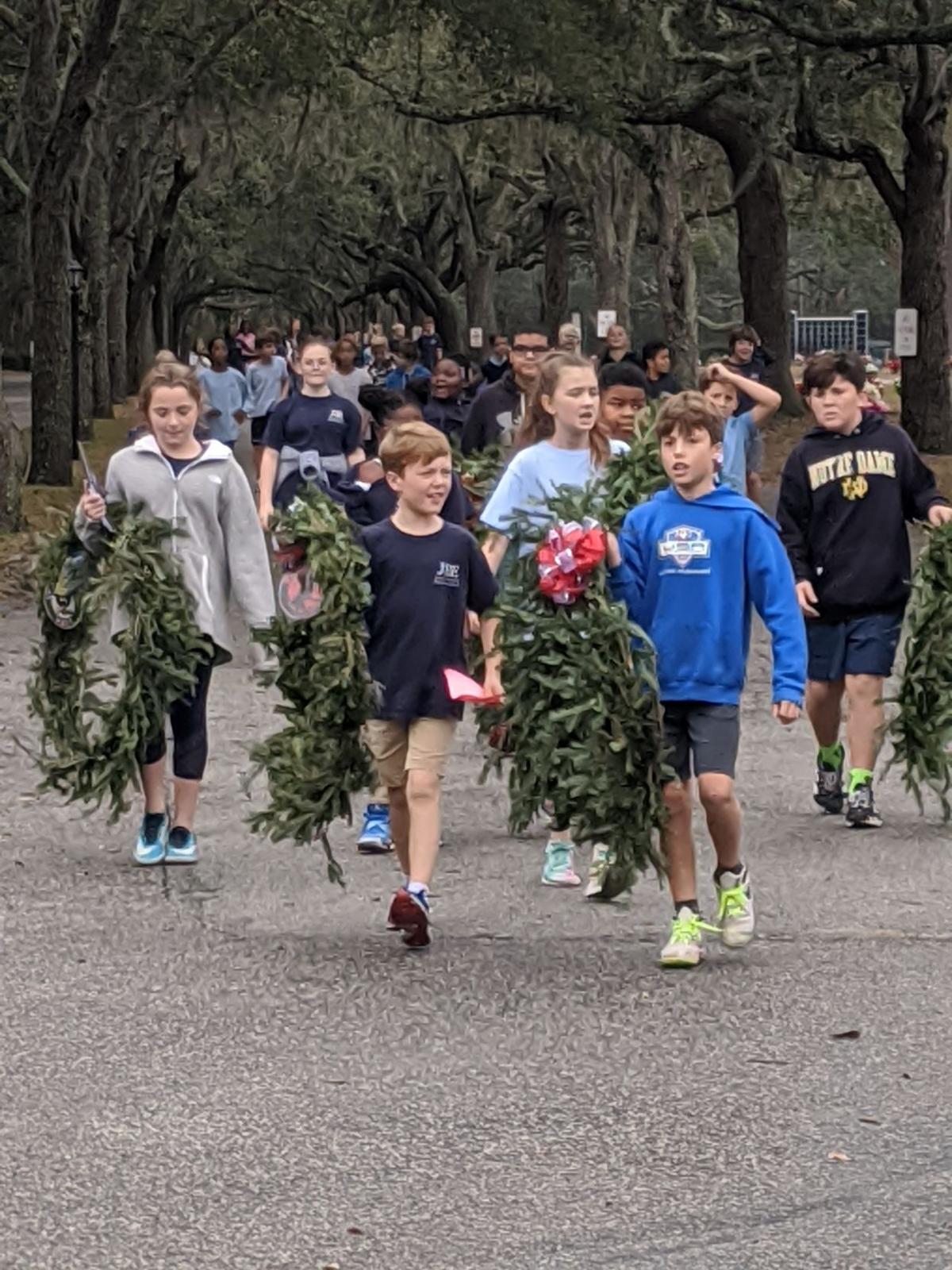 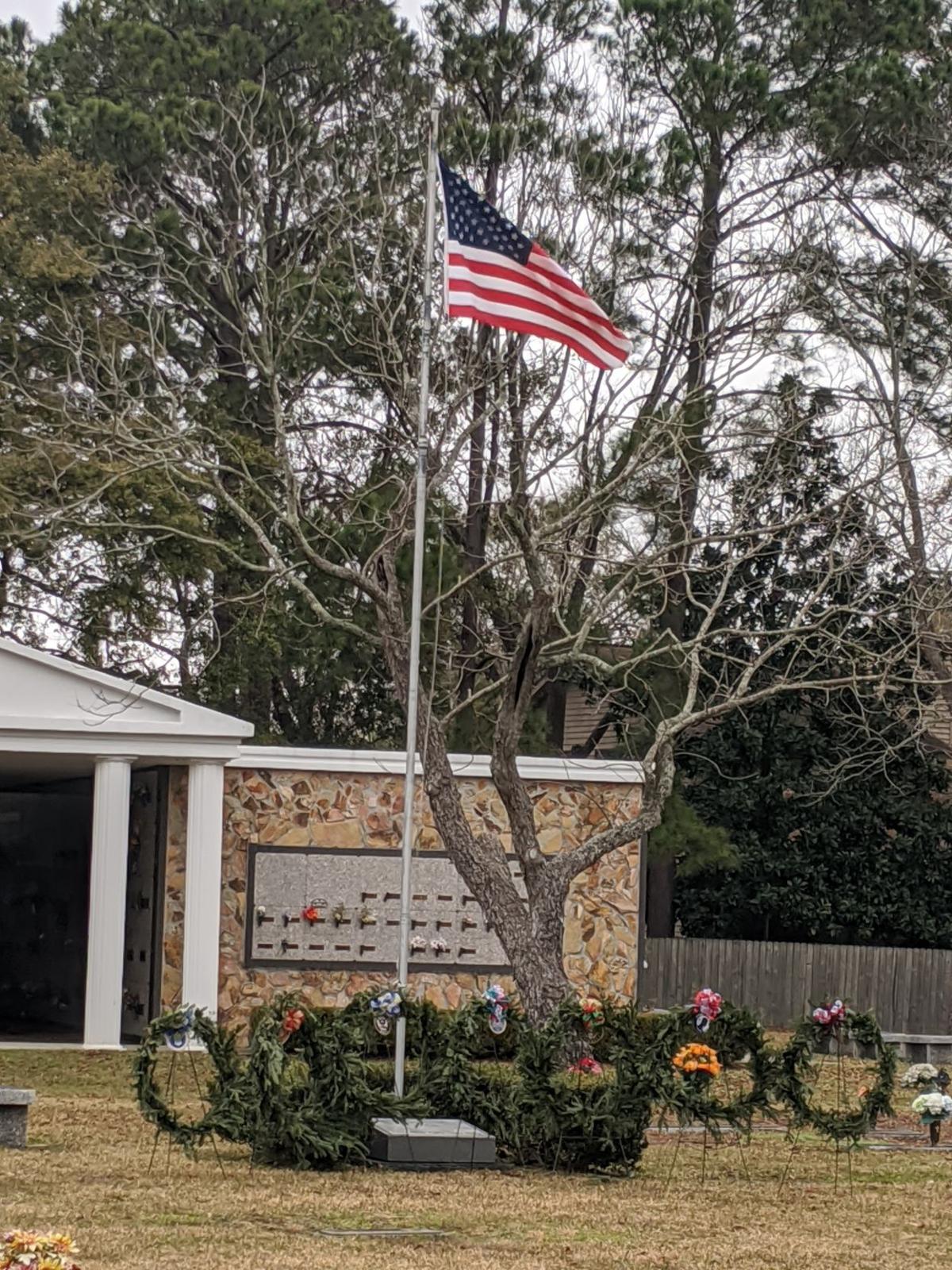 A teacher at James B. Edwards (JBE) is being recognized as the 2019 Veterans of Foreign Wars (VFW) Elementary School Teacher of the Year for South Carolina.

Nancy Platt goes above and beyond when it comes to honoring the servicemen and women of our country, according to members of the VFW that nominated her for the award. Through a number of programs and events inside and outside of the classroom, she is hard at work making sure children understand the importance of recognizing and respecting veterans.

“Along with being a fierce environmentalist, I am a very proud American and I’m very proud of my country and our heritage,” Platt said.

Five years ago, Platt joined the Daughters the American Revolution (DAR). She said the process includes proving her family’s lineage − birth, death and marriage of all relatives back to the Patriots. Platt explained that this was a pretty large endeavor for her, but she’d admired that DAR was a community service-oriented group so she wanted to join.

One year into being a member of the DAR, a member approached Platt to become chair of a new committee titled the Community Classroom Committee. Since it was new, DAR gave her the flexibility to build it into what she wanted. For the last four years she has been steadily incorporating veterans into events for students to learn about their nation’s heroes as a part of the chairmanship.

She has had a number of women from DAR visit to speak to her class over the past few years. She recalled one woman who came in dressed up and brought a collection of glass jars with female Patriots embellished on the glasses.

A handful of the activities she plans to highlight and incorporate veterans into the children’s lives are held at the Mount Pleasant Memorial Garden’s Cemetery on Mathis Ferry Road across from JBE in Mount Pleasant, which has numerous veteran burial sites.

Platt shared that she reached out to J. Henry Stuhr Funeral Home and explained that it was very important to her to instill a sense of patriotism in the students.

“I want to be one of these people that has pride in our country and that mentors these kids to find out more about people that serve and sacrifice their lives for us. And to develop character through patriotism,” Platt said.

Platt brainstormed with Brian Calhoun, director of Information Technology at Stuhr Funeral Homes and Mount Pleasant Memorial Garden’s Cemetery director, Patrick Mallard about events for veterans they could bring JBE students across the road to facilitate.

Now, each year in honor of Veterans Day, Memorial Day and Wreaths Across America, Platt takes students over to the cemetery. The students conduct a full program for veterans, teachers, parents and neighbors that gather on the grounds. The students have created wreaths for the ceremonies, place flags among veterans’ graves and discuss patriotism with the veterans.

At the same time she started those initiatives, Platt contacted Art Horn, American Legion Moultrie Post 136 commander. She worked with Horn to bring in veterans to attend the events at Memorial Gardens and speak to JBE’s fifth grade students since they study World War I, World War II and the Korean War.

“They’ve (Post 136) been amazing at bringing in guest speakers when the kids get to those standards throughout the year,” she said. “We actually had two WWII veterans come in two years ago and it was quite eye opening for the fifth grade.”

Platt said that she enjoys when Horn and other VFW members attend their ceremonies at the Memorial Gardens. She said they supply the American flags and have also brought commemorative bracelets with the five military branches on them for the students.

Horn, who became Post 136’s commander in July 2017, said he’s enjoyed working with Platt. He said for the last five years, Platt has been successfully planning events with the students that actively include veterans from the community. Horn said she thinks outside of the box and reaches out to bring various veterans into JBE.

“She is an outstanding teacher, first of all. She’s a great advocate for her students. She’s turning them into global citizens,” he said.

Horn said she does this in her classroom by teaching life experiences and engaging them with environmental concerns and issues outside of the classroom too.

On July 25, 2019, Platt won the Presidential Innovation Award for Environmental Educators. She traveled to Washington, D.C. where she was recognized alongside seven other teachers in the country by Andrew R. Wheeler, administrator of the U.S. Environmental Protection Agency (EPA). She also helped JBE become the first Green Step School in Charleston County School District (CCSD) last year. To maintain their Green Step designation, Platt leads JBE in six different projects annually that align the overarching ideas of being an environmentally friendly school.

Horn explained that he is always impressed by how Platt leads her students to the Memorial Garden’s cemetery, but then the students run the entire ceremony for the special veteran recognitions. When he and the veterans go in for various history lessons in the classroom, Horn said he likes to explain what it means to be a veteran and encourage them to consider serving as a possible future career path. Horn said the military paid for his college and other things he couldn’t have done on his own, so he hopes to share with young students all of the benefits of joining the service.

Horn’s admiration is the very reason he and the other local veterans nominated Platt in the fall for the VFW Elementary School Teacher of the Year Award.

Horn joined the Glenn L. Jeffers Post VFW 10624 as an Auxiliary Unit member in the fall, where he now serves as the chaplain. He and the other members of the Auxiliary submitted Platt just before the deadline and then their nomination went on to the VFW District 1.

“She’s just active on all fronts. You want to select a teacher for an award of this type; she embodies that in every way. I heard about the (VWF Teacher of the Year) award for the first time and I thought, that’s Nancy Platt, we’ve got to nominate her,” Horn said. “…She was most deserving. She embodies the award, literally.”

Bill King who serves as the commander of both the VFW Post 10624 of the VFW District 1, said he was very impressed by the requirements Platt met for the award and that she was one of the best applicants he’d ever judged. King joined the VFW 50 years ago, right when he completed his service in Vietnam. He served a total of 24 years in the Air Force. He’s been active in the VFW for the last six years.

VFW District 1 is comprised of 12 posts. King and the district members reviewed all of the nominees and sent their top choice onto the state, which is made of eight VFW Districts. The state VFW commander then works with an Award Program Committee to select the state winners.

He said he immediately knew that Platt was deserving of the VFW Teacher of the Year Award because of her continuous programs honoring veterans throughout the year.

It was only fitting that Horn told Platt the veterans had nominated her for the award when they were holding the Veteran’s Day ceremony at Memorial Gardens. Platt said she was speechless and found it the highest praise she could possibly get from someone that has served for the United States.

In January the VFW sent Platt an email announcing that she’d won the award.

“I was incredibly honored. Those were two key words that come to mind,” she said.

Platt said that she will continue to create opportunities for the students at JBE to interact with veterans. She admires when she can watch her students get comfortable talking with the veterans and ask deep questions so they can begin to understand the military.

“I think it helps the veterans in such a big way because they have so much to give,” Platt said. “I want to create more opportunities to connect the two entities because it is such a positive, beneficial relationship.”

Platt is already hard at work planning the next military related event. JBE will host their Spring Plant Sale on March 28 will they will have bulbs available to support the Poppies for Veterans fundraiser. All funds collected for these poppies will go to the Eliza Lucas Pinckney Chapter in Platt’s DAR group. She said the sale is alongside one of the school’s PTO fundraisers and the plant sale itself is one of the Lowcountry Sustainability Program’s fundraisers.

Platt will be recognized at the VFW District 1 upcoming award ceremony on March 14. VFW 10624 will also recognize Platt at their award ceremony on April 15 at their Post located on Stuart Engals Boulevard in Mount Pleasant. She will be presented with a plaque and check at both ceremonies.

If she goes on to win nationals, Platt would receive $1,000 to use for future projects and JBE would receive $1,000. For more information about the VWF Teacher of the Year Award and its requirements, visit vfw.org/community/youth-and-education/teacher-of-the-year.