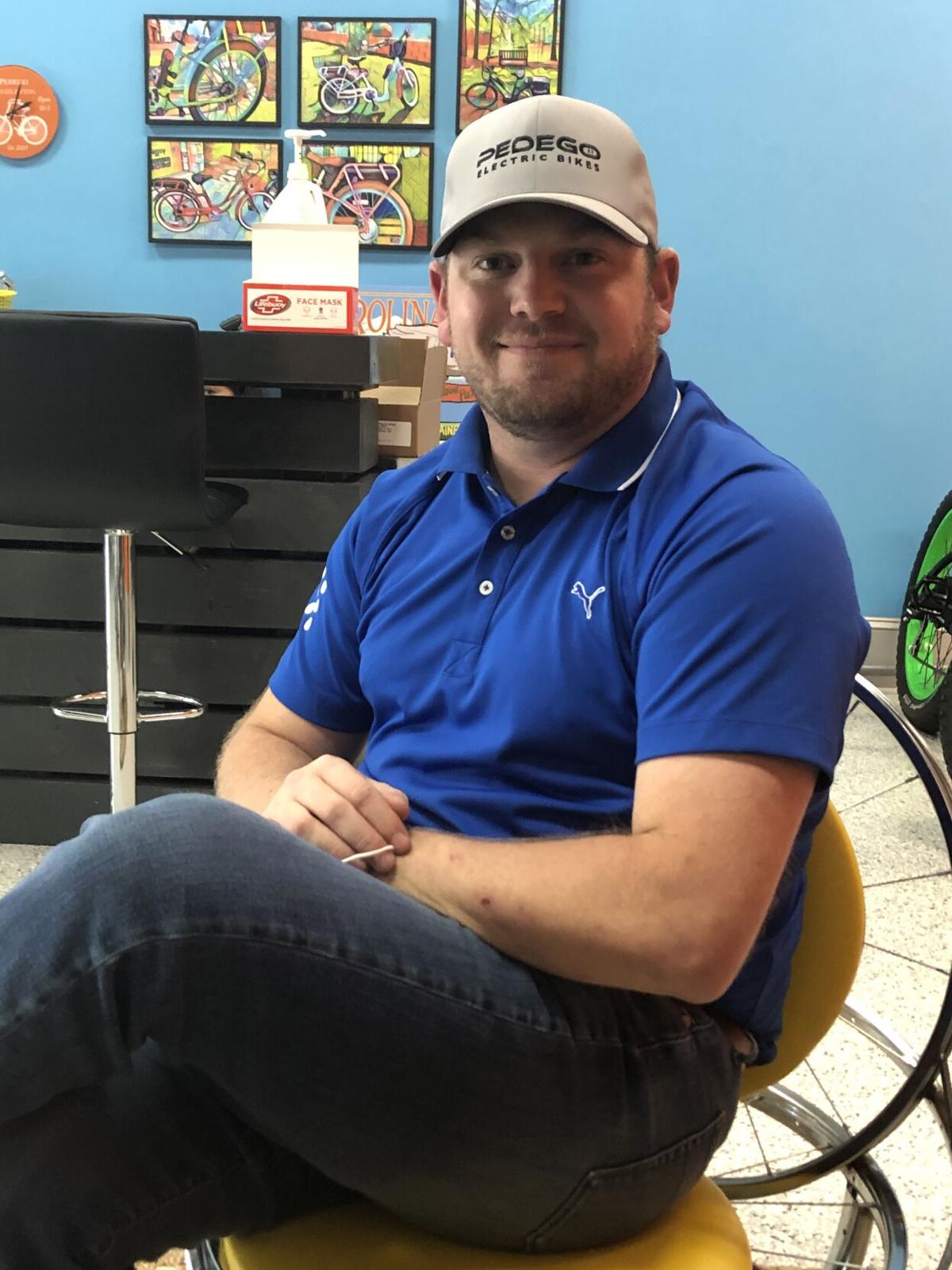 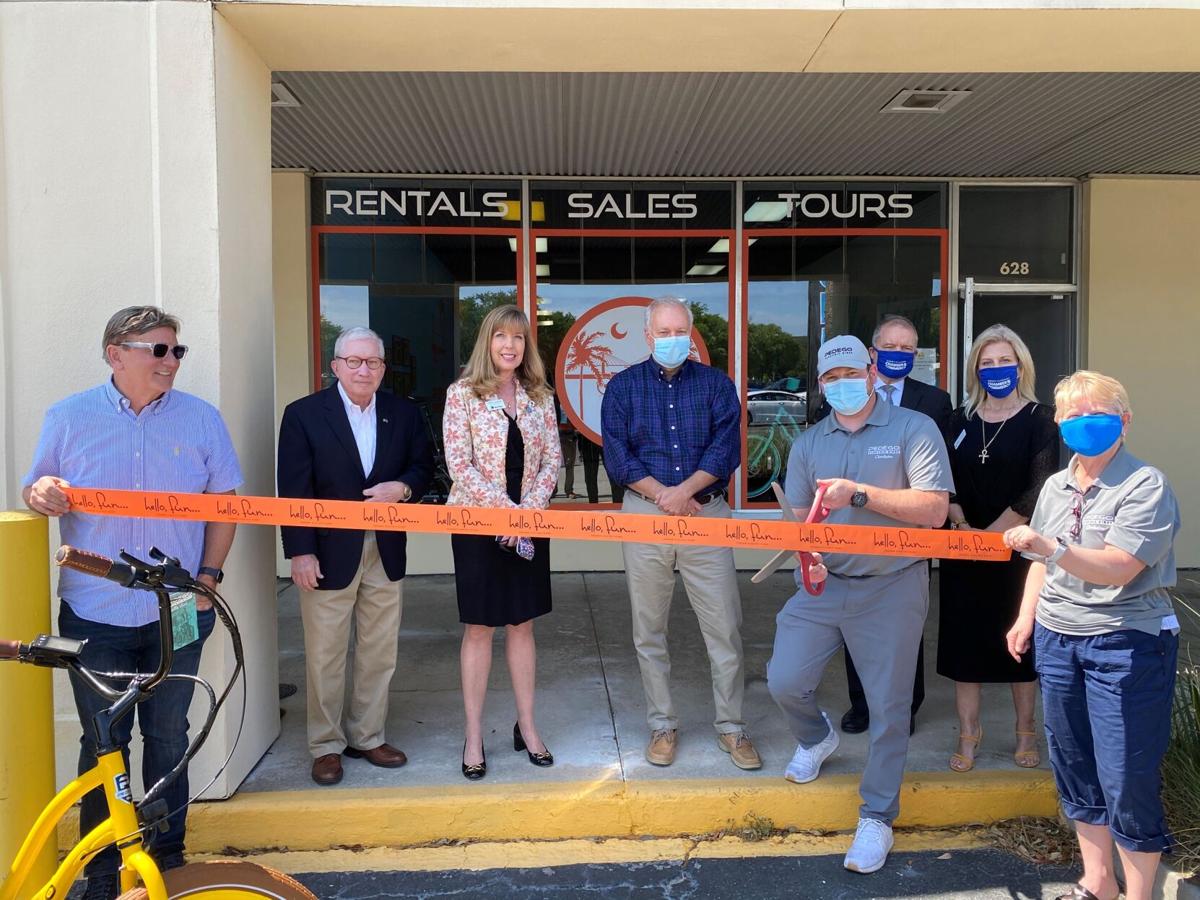 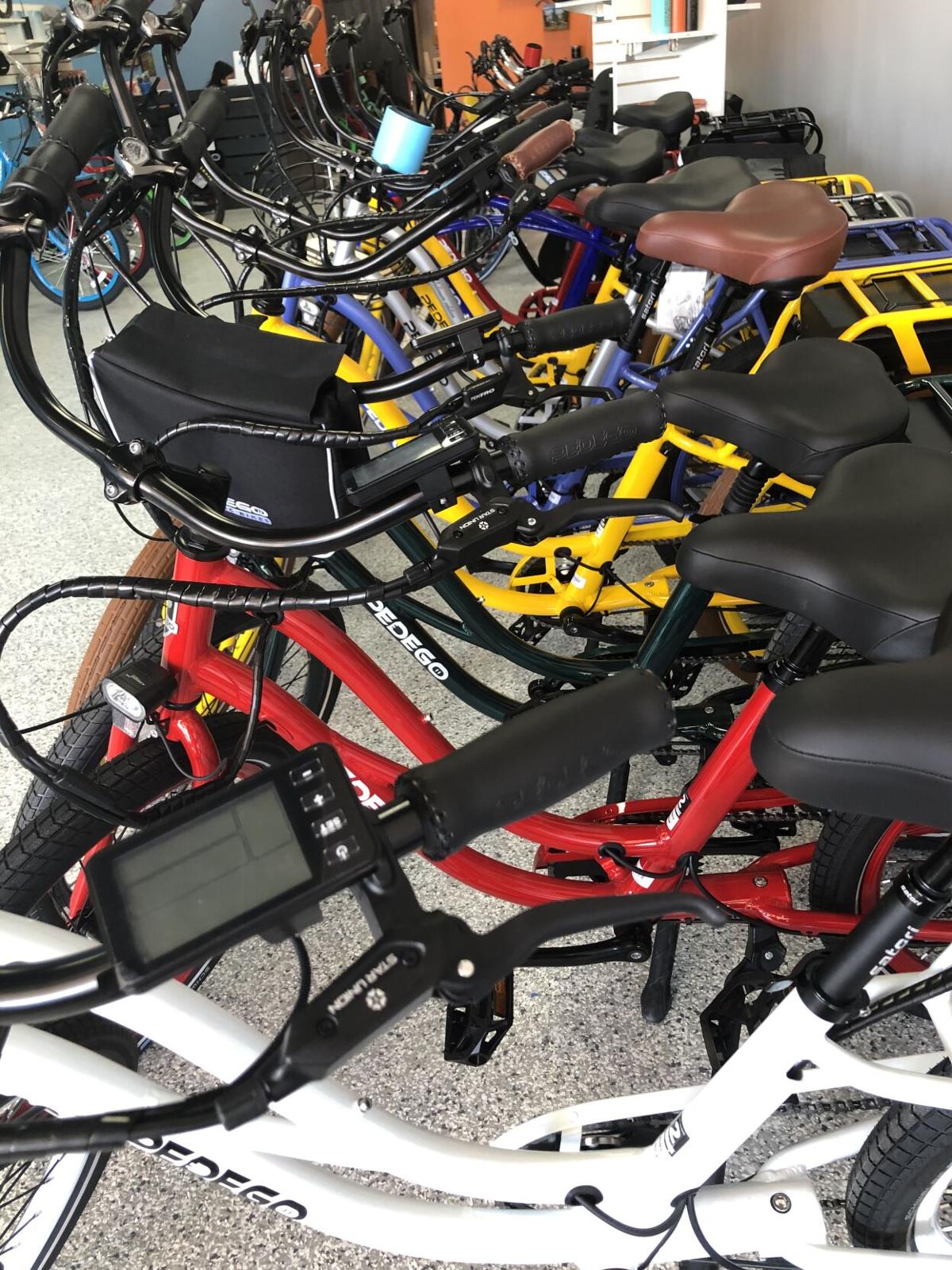 There are a wide variety of bikes depending on the needs of the customer, including a folding model, trail bikes, beach bikes, city bikes and even a tricycle model. 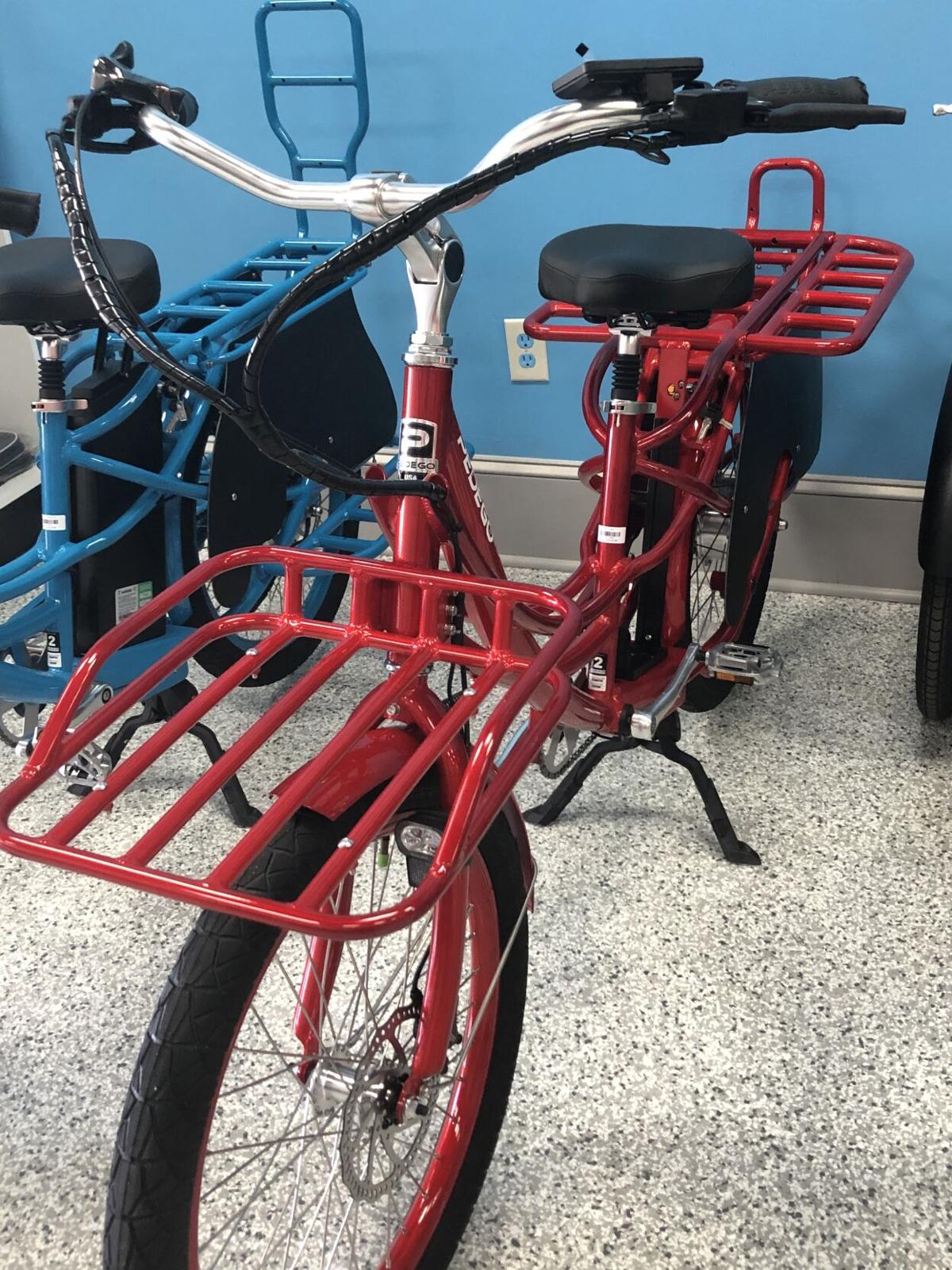 This electric bike is good for carrying cargo.

There are a wide variety of bikes depending on the needs of the customer, including a folding model, trail bikes, beach bikes, city bikes and even a tricycle model.

This electric bike is good for carrying cargo.

Learning to ride a bike is a childhood ritual for most people. As young adults it’s common to have a bike to get around a college campus or to and from a first job. A great many people of all ages find riding a bike a great way to get exercise and enjoy the outdoors. For others it even becomes an athletic accomplishment that involves racing and training. An electric bike offers the enjoyment of riding along with something a bit more – a power assist.

Pedego Electric Bikes opened April 3 at 628 Coleman Blvd. in Mount Pleasant and held a grand opening and ribbon cutting on April 23. The shop offers a broad selection of electric bikes from top manufacturers.

Owner Robert Crabtree said the best thing about electric bikes is their flexibility. “Our largest demographic is probably people who are ages 50-plus. The story that I hear all the time from customers who come in is they want to get out, they want to get exercising, they want to get moving outside again,” he said. Riding a traditional bike can be a problem for many older adults. “They’re riding along and they see that hill and they’re like, ‘this is going to be awful,’ right?” He said the ability to use the pedal assist or even just a bit of throttle, “gives people so much more freedom.”

“I literally had a guy come in the other day who bought a bike, and he has a fused hip, so he can’t pedal at all. And so the throttle is perfect. His wife is an avid bike rider, so he wants to be able to go out with his wife. Without the throttle on the bike he wouldn’t have that ability.” However, having a physical problem is not the only reason to purchase an electric bike. “People think if it’s an electric bike then you’re just going to use the motor all the time. That’s not true.” Crabtree said the bikes all ride like a normal bike whenever the owner wishes to ride that way.

There are a variety of bike types depending on what a customer is looking for — some for city or suburban riding, some for trails, and some good for beaches. He pointed to an especially sturdy-looking bike in the shop with larger tires. “That one’s called the Trail Tracker because it’s an all-terrain type bike. It does really well in loose sand. Most of our beach cruisers will do very well in hard packed sand as well.” There were two cargo bikes and a tricycle on display. One small neon green bike was a folding bike which he said “could fold up to about the size of a suitcase.” He said the folding bike is very popular with campers and boaters.

When asked why he chose this area for his business, Crabtree, who is originally from Denver, Colorado, said he went to law school in Charleston and lived in the area for about five years during that period before returning home to Denver. He said his family would “vacation here when I was a kid. So, you know, I had had an affinity for the area.”

Pedego Electric Bikes is a joint business between him and his father. Crabtree said they were looking around at different franchises and “sort of stumbled upon Pedego.” They liked the way the company was organized. “We’re not actually called franchisees, we’re called dealers. It is a little bit of a different structure. We’re more like a car dealership structure than an actual traditional franchise model.” This aspect appealed to them so they decided to find out where in the U.S. Pedego didn’t have one of their franchises. After speaking to the company they found out that Charleston was “open territory.” Crabtree said it “was a perfect excuse for me to move back to Charleston.”

Crabtree arrived in Charleston in February and found himself flying back and forth between Denver and Charleston to manage construction and other details prior to opening the business. It was a fast turn-around.

“We’re genuinely really excited to be in Mount Pleasant. We had an option of opening the store anywhere in the Charleston area. We think, for a lot of reasons, Mount Pleasant, made a lot of sense. He said owners of Pedego bikes have a strong sense of community. So the “open and inviting” community of Mount Pleasant “seemed like the perfect marriage.”

Crabtree is looking to grow his business beyond sales. The company is looking at bike rentals, such as doing Island and downtown Charleston tours. “We’re also thinking about doing some themed tours, like filming locations from the Notebook. And hopefully getting bachelorette parties and that sort of thing.”

The price range for electric bikes in general can be pretty variable. “You can get anything from a bike that is manufactured in China, that you order online with no support, for about $800. All the way up to some companies building very niche custom electric bikes for $6,000 to $10,000.”

Service is important to bike owners and Crabtree said one of the reasons to buy from a company such as theirs is “the components on all of our bikes are top quality. They’re name brands like Shimano, so you’re going to be getting really, really good components. That’s one of the things people notice about Pedego. In addition to that, and what’s different than a lot of ebike companies, is that we are a dealer model. There are 140 dealers around the United States and that number is growing at the moment and we can provide all the service that you need on the bike.” Pedego has a five year warranty on components and a lifetime warranty on the frame. “Anything that’s under warranty, we fix for free.”

Electric bike speeds top out at 20 miles an hour. “So it’s a class two, low speed electric vehicle,” Crabtree said. For those worried about safety, Crabtree emphasized that “just because you’re on an electric bicycle doesn’t make the activity of riding a bike any more dangerous or any more safe. You know, the average leisure rider on a regular bicycle goes about 12 miles an hour. The average sport cyclist goes well in excess of 20 miles an hour. So the fact that there’s an assisting motor on there doesn’t really change the calculation of whether or not it’s safer or not compared to just a regular bicycle.” A helmet, of course, is an essential when riding any type of bike.

For those looking to tackle bridges an electric bike can be a big help, even when riding up the Arthur Ravenel Jr. Bridge. “It would take it from what is a reasonably strenuous ride to just sort of a leisure activity where you get the best view,” Crabtree said.

So what is the best reason to buy an electric bike according to Crabtree? “Because they’re fun. That’s the bottom line.”