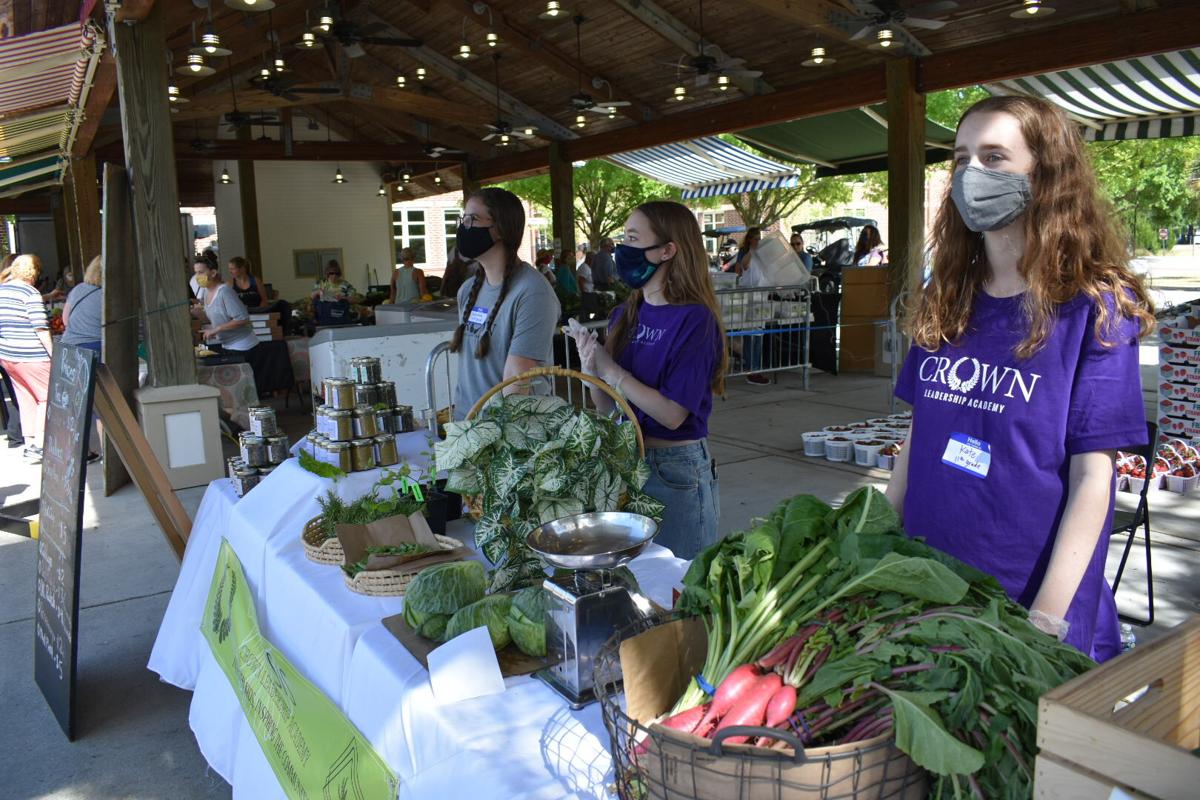 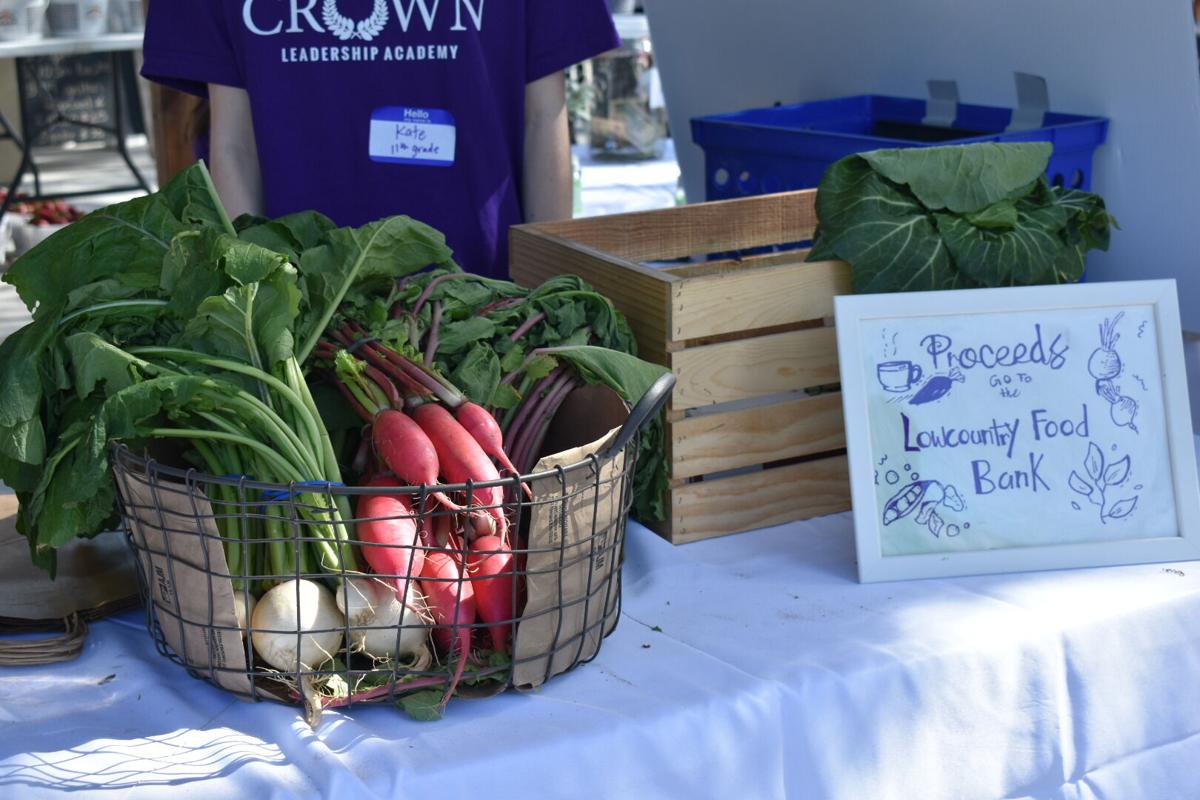 Radishes for sale at Crown Leadership Academy's booth at the Mount Pleasant Farmers Market on April 27. 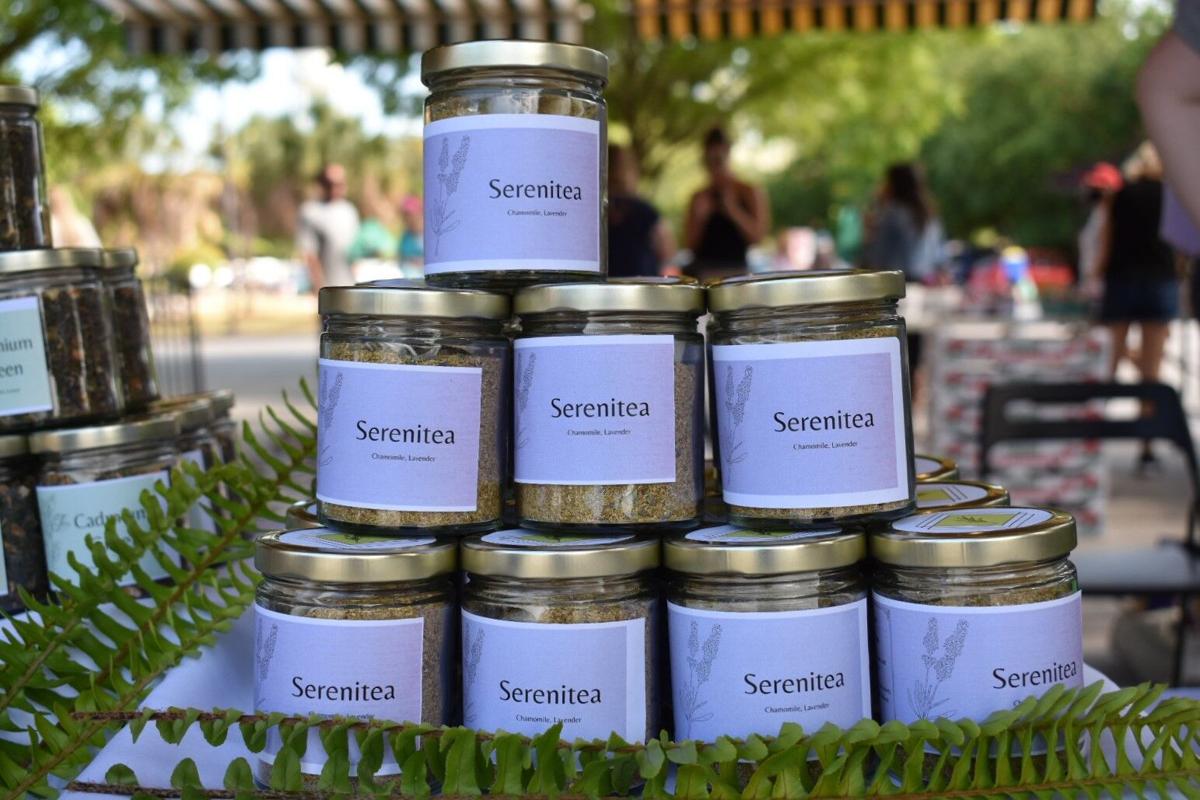 The Serenitea blend has chamomile and lavender flavors. 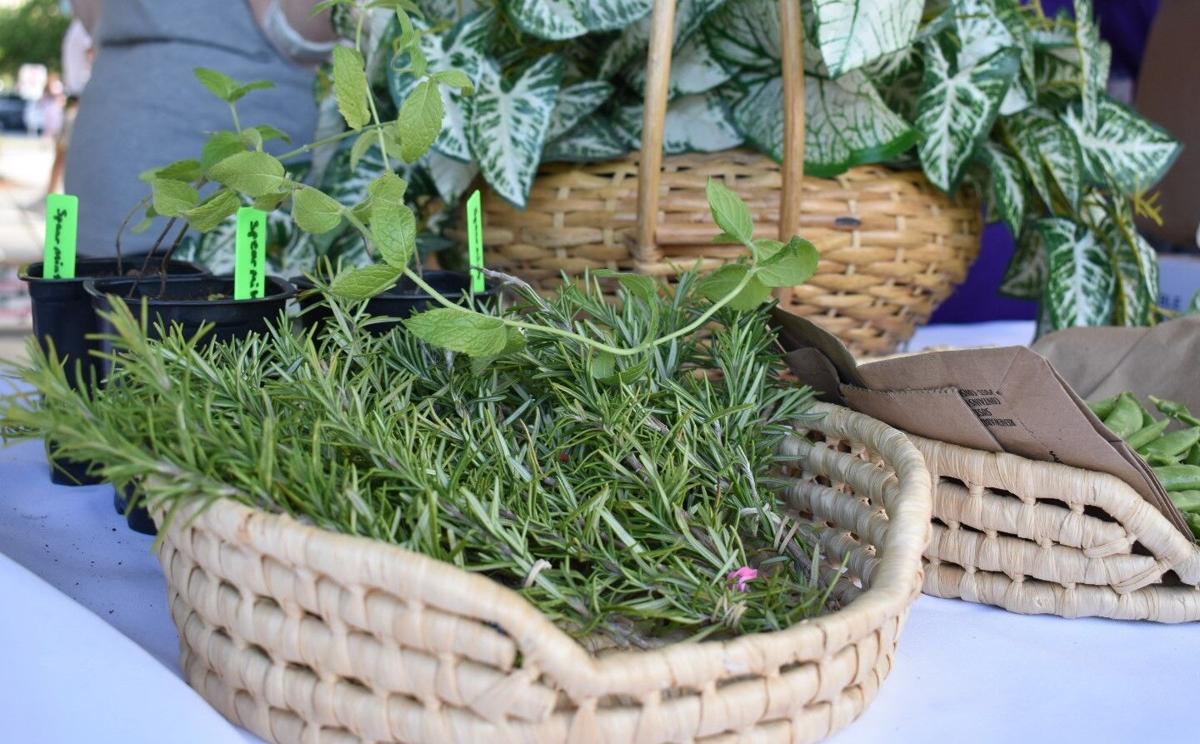 A high school economics class took its learning experience outside of the classroom. Juniors and seniors from Crown Leadership Academy in Mount Pleasant hosted a booth at the Mount Pleasant Farmers Market selling locally grown produce and homemade tea blends.

The booth resembled a typical market stand, including a table with a hanging sign that read “Oasis,” the name of the business. The tea jars were neatly stacked on a white tablecloth next to baskets of red radishes, herbs and snap peas and a display of canvas bags with the company logo.

The only difference were the teenagers running the operation.

“I thought I would be more stressed, but it’s definitely really fun,” said Kate Johnston, a junior at Crown Leadership Academy.

The students sold $300 worth of merchandise within the first hour at the market. All of the money raised went to Lowcountry Food Bank, a charity the students decided on.

Throughout the project, the students learned about food deserts, which are areas with few grocery stores or where people lack transportation to get fresh food.

“That was a foreign concept to me,” said Susannah Carhart, a senior at Crown Leadership Academy.

She said she lives near a grocery store even though her home is “in the middle of nowhere.” Plus, she recognized she’s always had access to a car, so going to the store has never been a problem.

The students chose a charity relating to food because one goal of the project was to impact the community through growing produce.

Mark Roberts, the social studies teacher who assigned the project, emphasized that the project was student-led. The students decided on each detail of the market booth, from the color of the tablecloth to the placement of the items and design of the logo.

Each student had a different role in either finance, production or marketing. Roberts said he created different teams to mimic a real business.

Roberts said he wanted to replicate a real-world experience so the students would get a feel for an actual business environment.

Carhart came up with the idea of selling tea at the market. She wanted their booth to stand out instead of only selling produce like many other vendors do. She thought customers would gravitate towards tea because it’s nature-related, but not commonly found at a market.

She created the tea blends by “mostly freestyling” the recipes after finding general guidelines on the internet. Her mom was the official taste-tester.

The three teas sold at the market include Mirage Mint, Cadmium Green and Serenitea, a blend of chamomile and lavender, which is Carhart’s favorite.

Roberts anticipated problems with getting a spot at the farmers market since most vendors are there throughout the market season. He reached out to market organizers and they worked with him to give the students a couple of opportunities to experience working a market booth.

Going to the farmers market was an important aspect of the project because it gives students real life experience instead of keeping the project in the ideation phase. “This is something no one else is doing,” Roberts said.

Crown Leadership Academy is a private K-12 school that focuses on project-based learning. The Mount Pleasant campus has around 160 students total and there is another location in North Charleston.

Reese Franyo, a senior in the class, was the head of marketing for the project. She designed the logo, helped with social media and communicated with the North Charleston campus. She made an effort to spread the word about the business.However, she said she wasn’t always taken seriously because she’s young.

“It’s definitely been a challenge deciding how we’re going to get our name out there,” Franyo said.

Initially, the class was split into two groups that would compete against each other: one was in charge of selling produce and the other sold the tea. However, one student proposed the idea to combine groups because it didn’t feel practical to go to the market separately.

“The original concept was that dividing between us would essentially breed healthy competition,” said the eleventh-grader. “Now, our competition is going to be us against everyone else at the farmers market.”

The students’ first outing at the farmers market proved to be successful as several items were sold out within the first hour. The handful of students running the booth all agreed that talking with customers and selling products was fun.