The Francis Marion National Forest is a little larger today, thanks to the efforts of three local entities to acquire 1,450 acres from a local landholding company.

The roadways and paths in the tract will make the forest more accessible for hiking, birding and hunting, as well as providing natural habitat for a wide variety of local species.

It's land that was once part of Peachtree Plantation on the Santee River — owned by Declaration signer Thomas Lynch III and celebrated by poet laureate Archibald Rutledge — that will now belong to the public.

The latest addition was made possible by the Open Space Institute (OSI) in partnership with the U.S. Forest Service and the Charleston County Greenbelt Program. 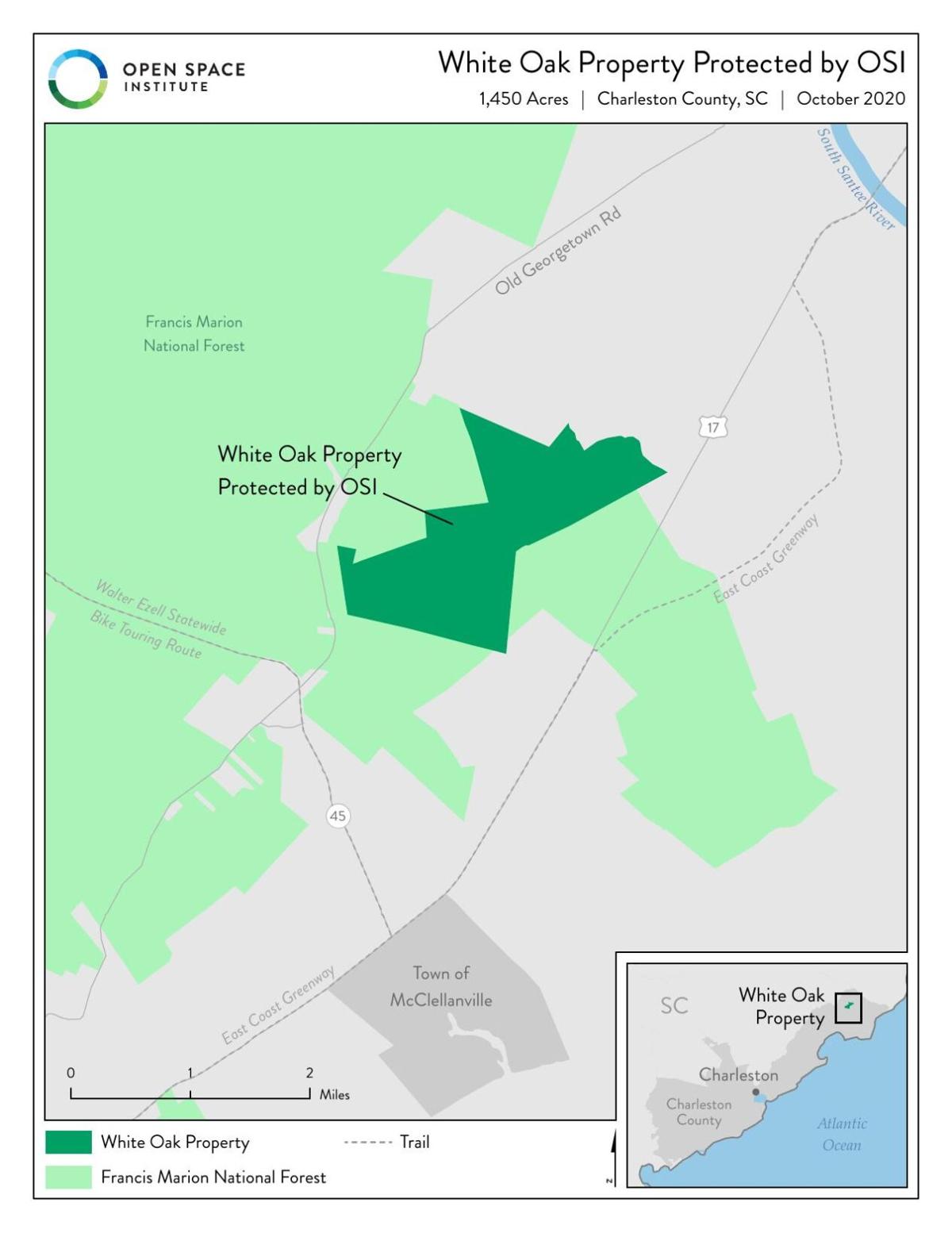 Located just north of McClellanville, the 1,450-acre White Oak Atlantic Creosote tract contains an extensive network of dirt roads through some of the most beautiful native longleaf pine woods in the Lowcountry. The property was purchased from White Oak Forestry Corporation — a local corporation that stewards and conserves thousands of acres of significant forest in and around the Santee Delta. It is also a subsidiary of Evening Post Industries, parent company for the Moultrie News.

Bordered on three sides by the quarter-million-acre national forest, the property sits across Highway 17 from the 22,000-acre Santee Coastal Reserve and beyond that, the 60,000-acre Cape Romain National Wildlife Refuge. White Oak is the largest acquisition by the Charleston County Greenbelt Program.

The 1,450 acres also represent the biggest private holding left in the Francis Marion and the seventh addition to the national forest by Open Space Institute — which has conserved more than 8,100 acres in and around the forest since completing its first project there in 2014.

In addition to support from the Charleston County Greenbelt Program, the permanent protection of the property was made possible with funds from the federal Land and Water Conservation Fund.

OSI Senior Vice President Nate Berry, who is based in Charleston and oversees OSI’s work in South Carolina, offered his appreciation for the team effort. “We thank our talented conservation partners for their tireless efforts to protect South Carolina’s unparalleled natural resources for future generations," said Berry

U.S. Forest Service Supervisor Rick Lint agreed, saying, “The Charleston Greenbelt’s vision and OSI’s ability to facilitate this acquisition for the national forest will benefit the public now and for future generations. The need for public lands has never been more important. We are honored to continue conservation efforts on this wonderful property.”

Beezer Molten, owner of Half-Moon Outfitters and chair of the Charleston Greenbelt Advisory Board, added, “The greenbelt fund is one of the best tools the county has to control development and open up all kinds of opportunities for bicycling, hiking and paddling. Especially during the pandemic, we have seen how critical it is to continue to add to our inventory of public lands and make them more accessible to the general public.”

The White Oak road system will connect to the popular Walter Ezell Bike Trail and the East Coast Greenway. Cyclists, hikers, birders and hunters will gain enhanced access into the national forest and the Santee Delta landscape — a still-wild part of northern Charleston County that looks much the same as when George Washington traveled through on horseback in 1799.

A 2016 study conducted by Clemson University for the S.C. Department of Natural Resources documents the total annual economic contribution of the forestry sector to be approximately $19.4 billion in South Carolina, providing more than 75,000 jobs. Likewise, the total annual contribution from fishing, hunting and wildlife viewing to the state’s economy is estimated at just under $3 billion, creating some 32,000 jobs.

While the White Oak acquisition adds to the matrix of natural resource-based enterprises and recreation in the national forest, it also contributes to an extensive matrix of key wildlife habitat, especially for endangered species such as the Rafinesque’ s big-eared bat, the flatwoods salamander and the red-cockaded woodpecker. Biologists have documented three clusters of this rare woodpecker on the White Oak property alone — each cluster comprised of several or more birds occupying a nesting area of up to 20 acres and a foraging territory of 75.

It is also a place rich in Native American and African American history. Near White Oak’s northwest boundary runs the Old Georgetown Road, once called the King’s Highway, and prior to European and African settlement known as the Great Catawba Trading Path — an important trade route for Native American tribes traveling between the Carolinas. Later, enslaved Africans and African Americans made up the majority of the population of the Santee Delta — their labor and expertise earning huge profits for rice planters. After the Civil War, numerous former bondsmen purchased land and stayed in the area, establishing communities such as Germanville (aka Germantown) and South Santee, where a number of their descendants still live. Many use the forest for fishing and hunting, as well as for collecting medicinal plants.

An added benefit of the transfer of the White Oak tract into the national forest is protection and connectivity among sites of significant natural and cultural value — including prime multi-age stands of native longleaf pine (one of the most endangered forest types in North America), a stretch of the Old Georgetown Road listed on the National Register, the National Landmarks of Hampton Plantation (a state park) and the 1768 Brick Church of St. James Santee, the historic African-American community of Germanville, Howard AME Church, and the Wambaw Creek Wilderness.