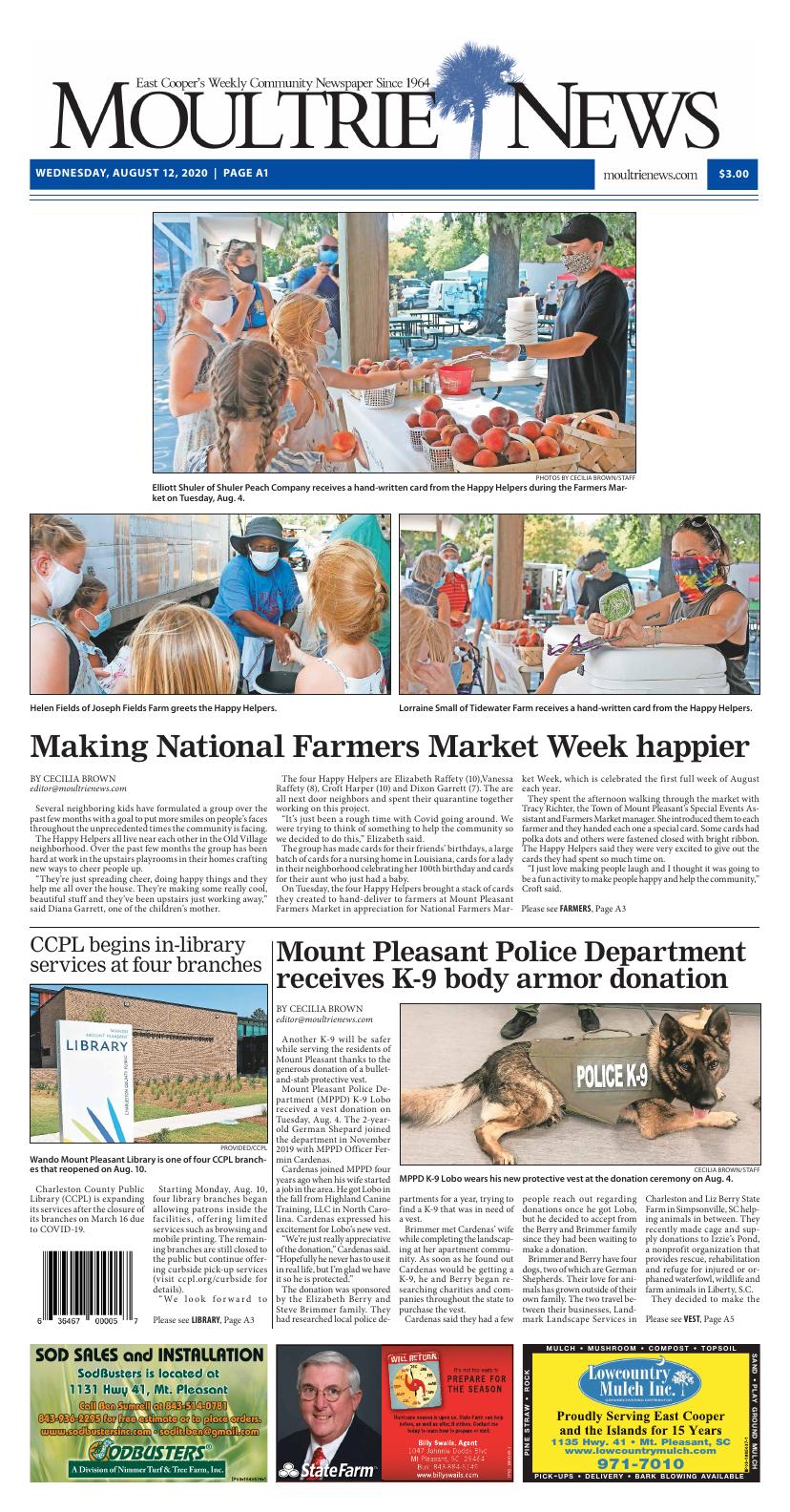 Elliott Shuler of Shuler Peach Company receives a hand-written card from the Happy Helpers during the Farmers Market on Tuesday, Aug. 4.

Lorraine Small of Tidewater Farm receives a hand-written card from the Happy Helpers.

The Happy Helpers pictured (from left) are Dixon Garrett, Croft Harper, Vanessa Raffety and Elizabeth Raffety holding their peaches from Freeman Produce and the cards they were passing out at the Farmers Market on Aug. 4.

Several neighboring kids have formulated a group over the past few months with a goal to put more smiles on people’s faces throughout the unprecedented times the community is facing.

The Happy Helpers all live near each other in the Old Village neighborhood. Over the past few months the group has been hard at work in the upstairs playrooms in their homes crafting new ways to cheer people up.

“They’re just spreading cheer, doing happy things and they help me all over the house. They’re making some really cool, beautiful stuff and they’ve been upstairs just working away,” said Diana Garrett, one of the children’s mother.

The four Happy Helpers are Elizabeth Raffety (10),Vanessa Raffety (8), Croft Harper (10) and Dixon Garrett (7). The are all next door neighbors and spent their quarantine together working on this project.

“It’s just been a rough time with Covid going around. We were trying to think of something to help the community so we decided to do this,” Elizabeth said.

On Tuesday, the four Happy Helpers brought a stack of cards they created to hand-deliver to farmers at Mount Pleasant Farmers Market in appreciation for National Farmers Market Week, which is celebrated the first full week of August each year.

They spent the afternoon walking through the market with Tracy Richter, the Town of Mount Pleasant’s Special Events Assistant and Farmers Market manager. She introduced them to each farmer and they handed each one a special card. Some cards had polka dots and others were fastened closed with bright ribbon. The Happy Helpers said they were very excited to give out the cards they had spent so much time on.

“I just love making people laugh and I thought it was going to be a fun activity to make people happy and help the community,” Croft said.

Vanessa echoed Croft and said it was fun making the community a better place.

As they walked to each produce stand and met the farmers, the kids smiled behind their masks and said thank you to the farmers for their work to bring fresh food to the residents in town.

“It was adorable. I wish they could have seen my expression and vice versa; the masks make it weird. But hopefully they could tell I was smiling and appreciating their gift,” said Nathan Boggs.

Boggs is also known as the Chicken Lord of Fili-West Farms, a pasture-raised poultry and eggs farm located in Vance, SC. He said it’s been a long time since he had received a hand-written note.

“Usually they come from a niece or nephew. That was probably the first time I’ve gotten a card from a random kid that I didn’t know so that was neat,” he said.

Dixon, one of the helpers, said he liked making cards during National Farmers Market Week because he likes helping people and making them happy. He also said he likes eating vegetables so it was fun to give the cards to farmers.

On the hot summer afternoon, it gave the vendors an opportunity to pause from selling their homegrown vegetables, fruits, eggs and flowers to speak with the Happy Helpers.

Sasha and Matt Willard owners of Red, White & Bloom, a Lowcountry veteran-owned flower farm, gave flowers to the Happy Helpers in appreciation of the cards they received. Matt served three years active in the U.S. Army and the two started their farm off of Hwy 41 in Moncks Corner this year.

“They were so sweet to give us those notes,” Sasha said. “As first year farmers, it really fuels us to keep going and doing what we’re doing for our community; providing flowers for everybody to enjoy – especially right now during this time with the coronavirus.”

Each of the Happy Helpers were also given a peach from Rose Freeman of Freeman Produce located on Johns Island.

She said she loved that the kids took the time to make her a card during National Farmers Market Week.

She said some days at the market this year have been good, some have been slow; but Tuesday was special.

The Happy Helpers said they would like to continue making crafts and cards all year long. They explained due to the changes that may make this upcoming school year hard, they think this will be a good way to spread cheer as much as they can to parents and students.

Another K-9 will be safer while serving the residents of Mount Pleasant thanks to the generous donation of a bullet-and-stab protective vest.

Cardenas joined MPPD four years ago when his wife started a job in the area. He got Lobo in the fall from Highland Canine Training, LLC in North Carolina. Cardenas expressed his excitement for Lobo’s new vest.

“We’re just really appreciative of the donation,” Cardenas said. “Hopefully he never has to use it in real life, but I’m glad we have it so he is protected.”

The donation was sponsored by the Elizabeth Berry and Steve Brimmer family. They had researched local police departments for a year, trying to find a K-9 that was in need of a vest. 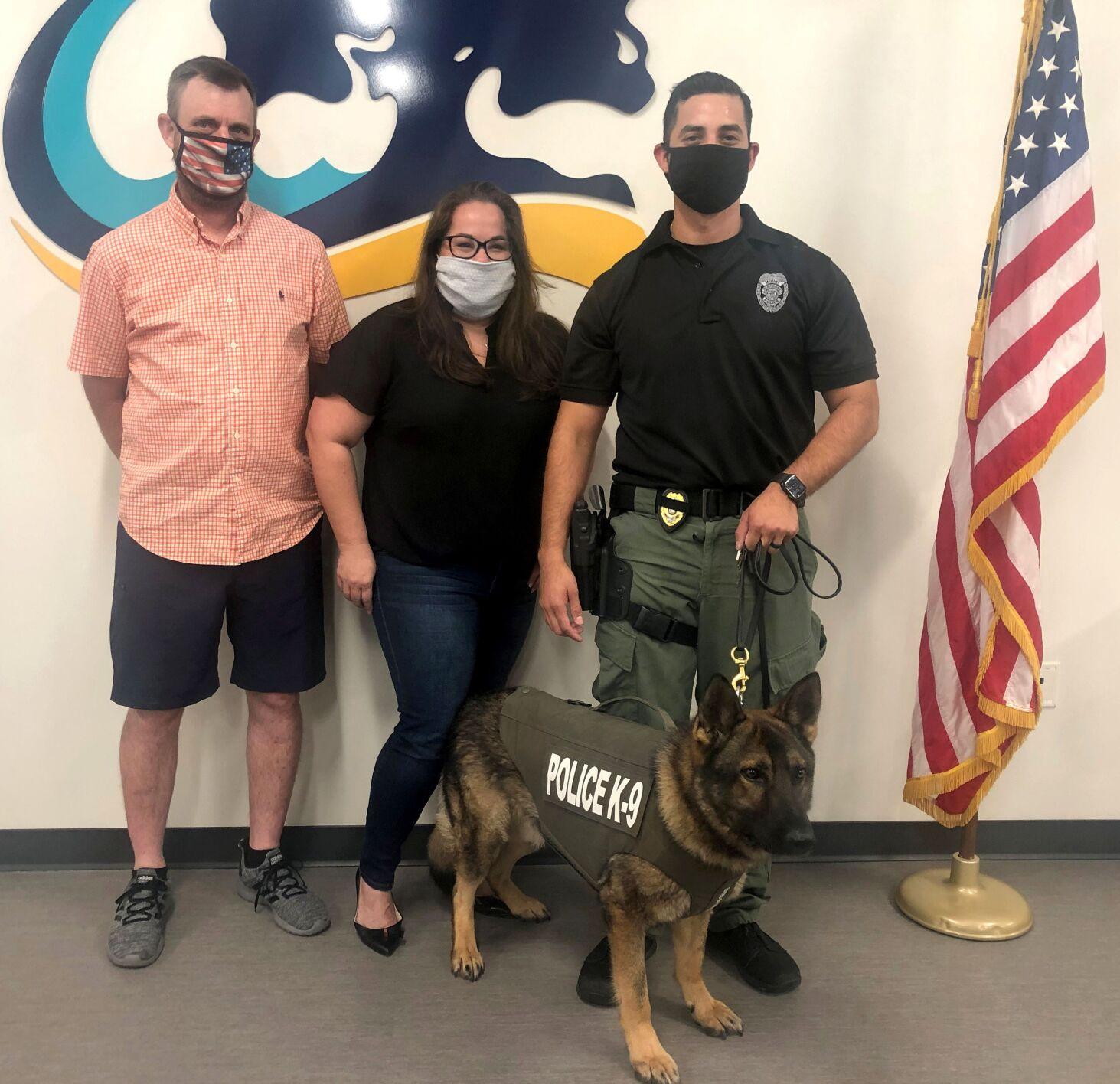 Brimmer met Cardenas’ wife while completing the landscaping at her apartment community. As soon as he found out Cardenas would be getting a K-9, he and Berry began researching charities and companies throughout the state to purchase the vest.

Cardenas said they had a few people reach out regarding donations once he got Lobo, but he decided to accept from the Berry and Brimmer family since they had been waiting to make a donation.

Brimmer and Berry have four dogs, two of which are German Shepherds. Their love for animals has grown outside of their own family. The two travel between their businesses, Landmark Landscape Services in Charleston and Liz Berry State Farm in Simpsonville, SC helping animals in between. They recently made cage and supply donations to Izzie’s Pond, a nonprofit organization that provides rescue, rehabilitation and refuge for injured or orphaned waterfowl, wildlife and farm animals in Liberty, S.C.

They decided to make the donation to MPPD through Vested Interest in K9s, Inc. The nonprofit organization provides protective vests and equipment to dogs of law enforcement and related agencies throughout the United States.

Now, K-9 Lobo will don a custom fit, potentially life-saving body armor while he protects the town. The vest weights between 4-5 pounds and comes with a five-year warranty. His new green uniform will match all four vests the other MPPD K-9s wear.

The vest is embroidered with the sentiment “Gifted by the Berry-Brimmer family” on the chest area.

Berry explained she started her State Farm career in downtown Charleston and moved into Mount Pleasant before opening an agency in the Upstate. She said it is exciting to give back where she started her insurance career.

“We are hopeful to do this in the future for another agency,” Berry said.

Brimmer agreed and said they would be more than happy to make another donation to MPPD.

Cardenas expressed that he really enjoys having Lobo as a full-time partner. He said they have fun together and he enjoys chasing after a ball in an open field, just like any other dog.

“He looks ferocious but he likes to plop himself down and get belly rubs,”Cardenas said.

At home, Lobo has a friend named Sap. She is Cardenas’ 7-year-old Golden Retriever that enjoys when Lobo amd Cardenas get off their shift fighting crime in town. Both dogs shed a lot and Cardenas said he has to spend some time each day brushing them.

In March, Lobo proved he was a fast-learning addition to the police department when he assisted with a narcotics bust. Cardenas complimented that Lobo’s very first time in the water during a bite training, he jumped right in and completed the training proficiently.

In addition to working for the town, Cardenas also serves in the U.S. Army Reserves. He joined the Engineer Corps in October 2013 and is a captain but plans to take command of 712th Engineer Support Company in September.

For more information about donations to Vested Interest in K9s, Inc. visit vik9s.org, or you may mail your contribution to P.O. Box 9, East Taunton, MA 02718.

View a video of K-9 Lobo in his new vest online at moultrienews.com/videos.

Wando Mount Pleasant Library is one of four CCPL branches that reopened on Aug. 10.

Charleston County Public Library (CCPL) is expanding its services after the closure of its branches on March 16 due to COVID-19.

“We look forward to welcoming our patrons back inside our library locations and are committed to do so in a manner that is safe for our public and for our staff,” said CCPL Executive Director Angela Craig.

The Main Library, Baxter-Patrick James Island Library, Wando Mount Pleasant Library and Dorchester Road Regional Library will be open to the public during the following hours:

During this initial phase, the four libraries above will provide the following in-library services:

*Library staff cannot offer change for printing or copying so patrons will have to use the cash they have available or use a debit or credit card.

Per a Charleston County mandate, patrons are required to wear a mask at all times while inside of a library facility, and masks should fully cover the nose and mouth. All CCPL buildings are adhering to occupancy limits, so you may experience a wait before entering a branch. We encourage patrons to spend no more than one hour in the building to allow more patrons to have an opportunity to use the library.

For the branches that remain closed to the public, curbside pick-up services are still available. For details on how to use curbside services, as well as making an appointment online, visit ccpl.org/curbside or call your local library branch. 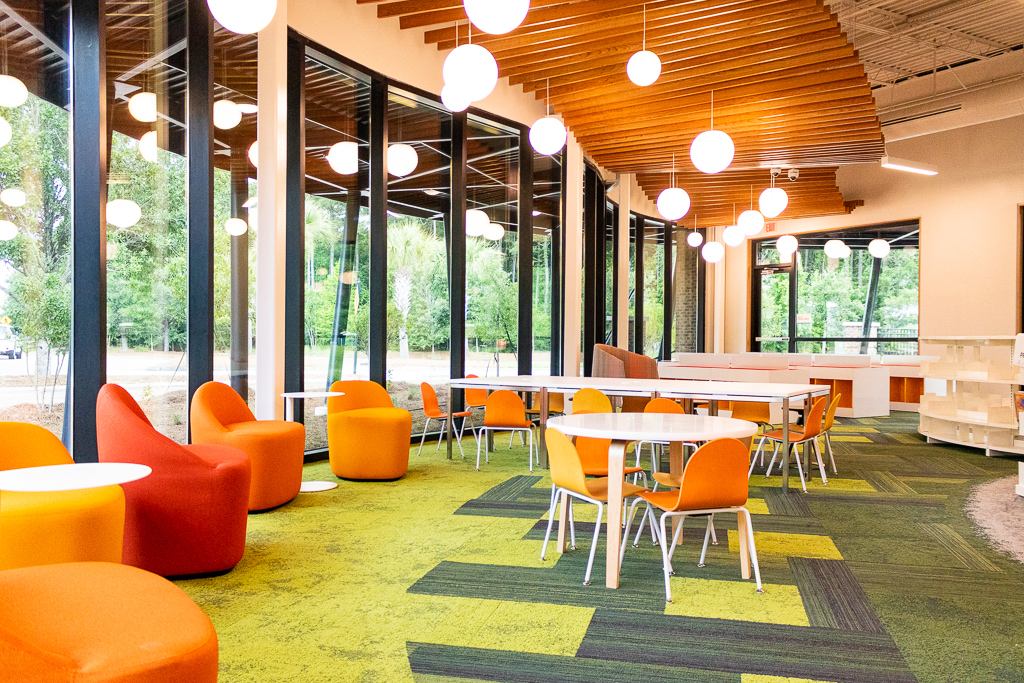 Public programs and room bookings remain suspended. However, virtual programs will continue on our website, where you can access a calendar of virtual events, and on CCPL’s Facebook page.

Wifi will continue being accessible outside all CCPL buildings Monday through Friday between 10 a.m. and 7 p.m. This extended wifi is not currently available outside the Folly Beach Library.

Book returns are open at all branches All items returned are being quarantined for 96 hours before they are processed, checked back in and recirculated. We ask that the following items not be returned in the book drop. If you wish to return any of these items, please call or speak to a staff member at your local branch to arrange the return.

For continued updated and information on CCPL operations, visit ccpl.org or connect with the library on social media. 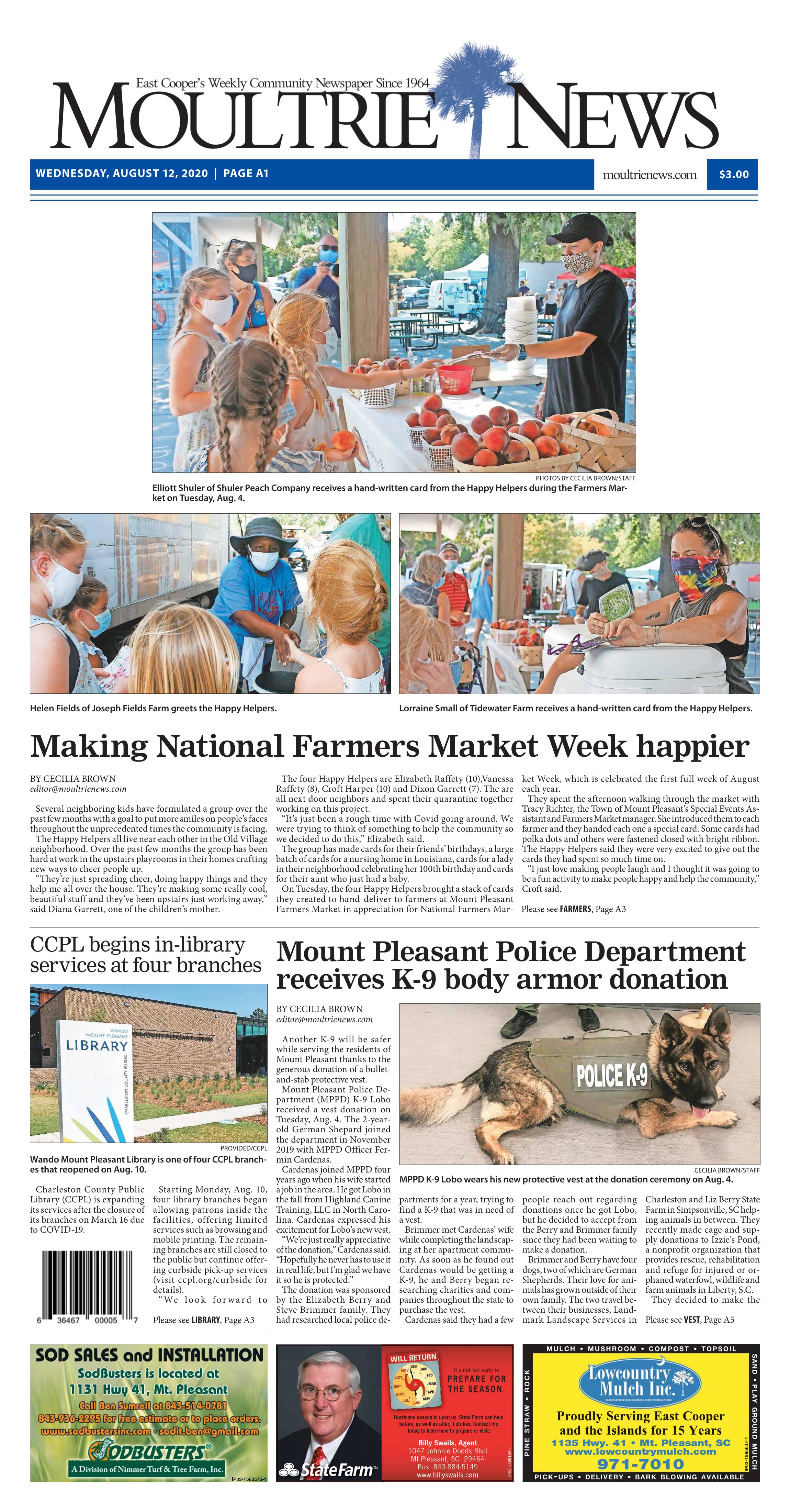