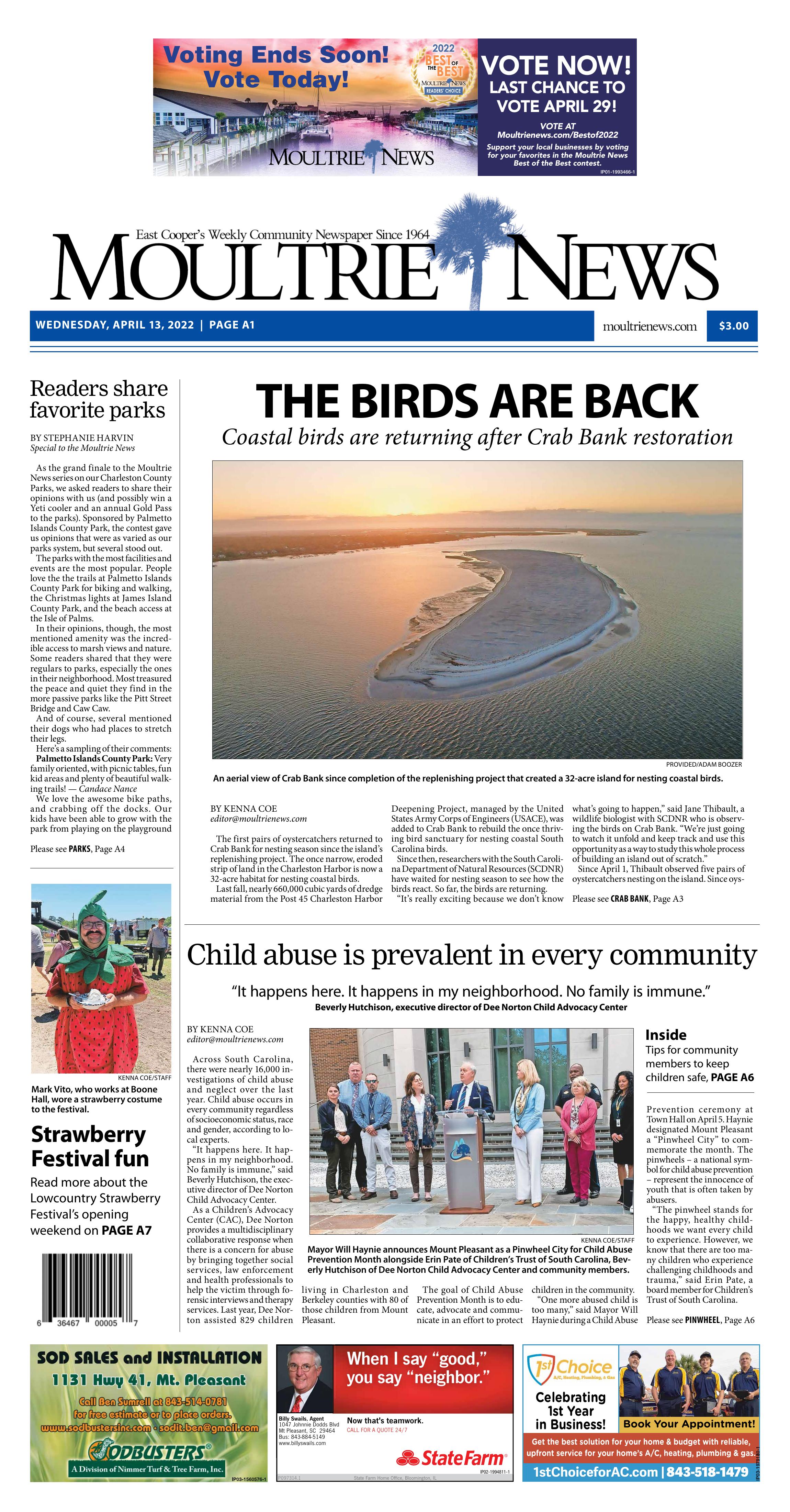 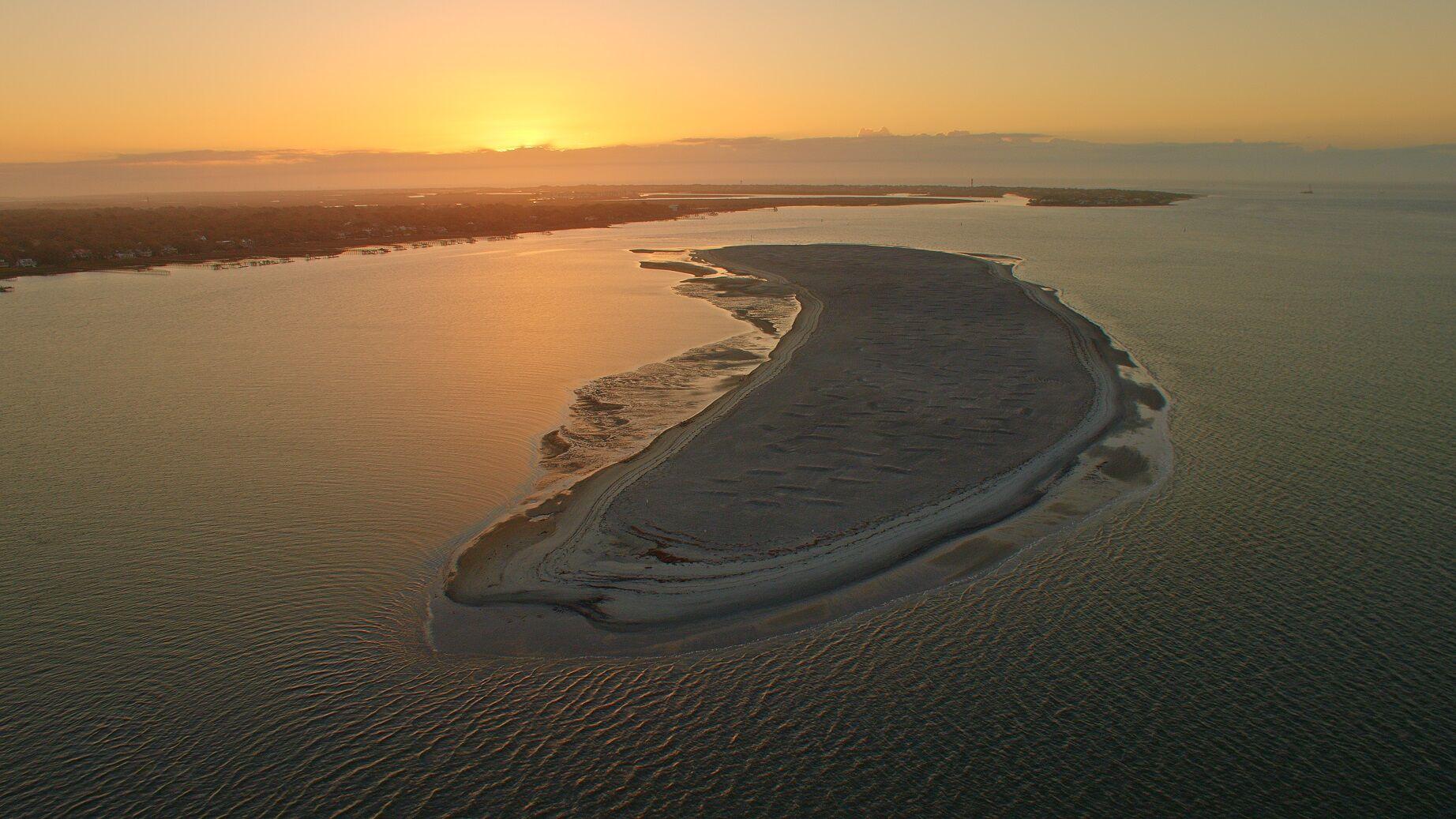 An aerial view of Crab Bank since completion of the replenishing project that created a 32-acre island for nesting coastal birds.

The first pairs of oystercatchers returned to Crab Bank for nesting season since the island’s replenishing project. The once narrow, eroded strip of land in the Charleston Harbor is now a 32-acre habitat for nesting coastal birds.

Since then, researchers with the South Carolina Department of Natural Resources (SCDNR) have waited for nesting season to see how the birds react. So far, the birds are returning.

“It’s really exciting because we don’t know what’s going to happen,” said Jane Thibault, a wildlife biologist with SCDNR who is observing the birds on Crab Bank. “We’re just going to watch it unfold and keep track and use this opportunity as a way to study this whole process of building an island out of scratch.”

Since April 1, Thibault observed five pairs of oystercatchers nesting on the island. Since oystercatchers are territorial birds, the pairs have their own nesting area and “run around the beach piping and tossing their heads up and down to ward off other oystercatchers,” said Thibault. 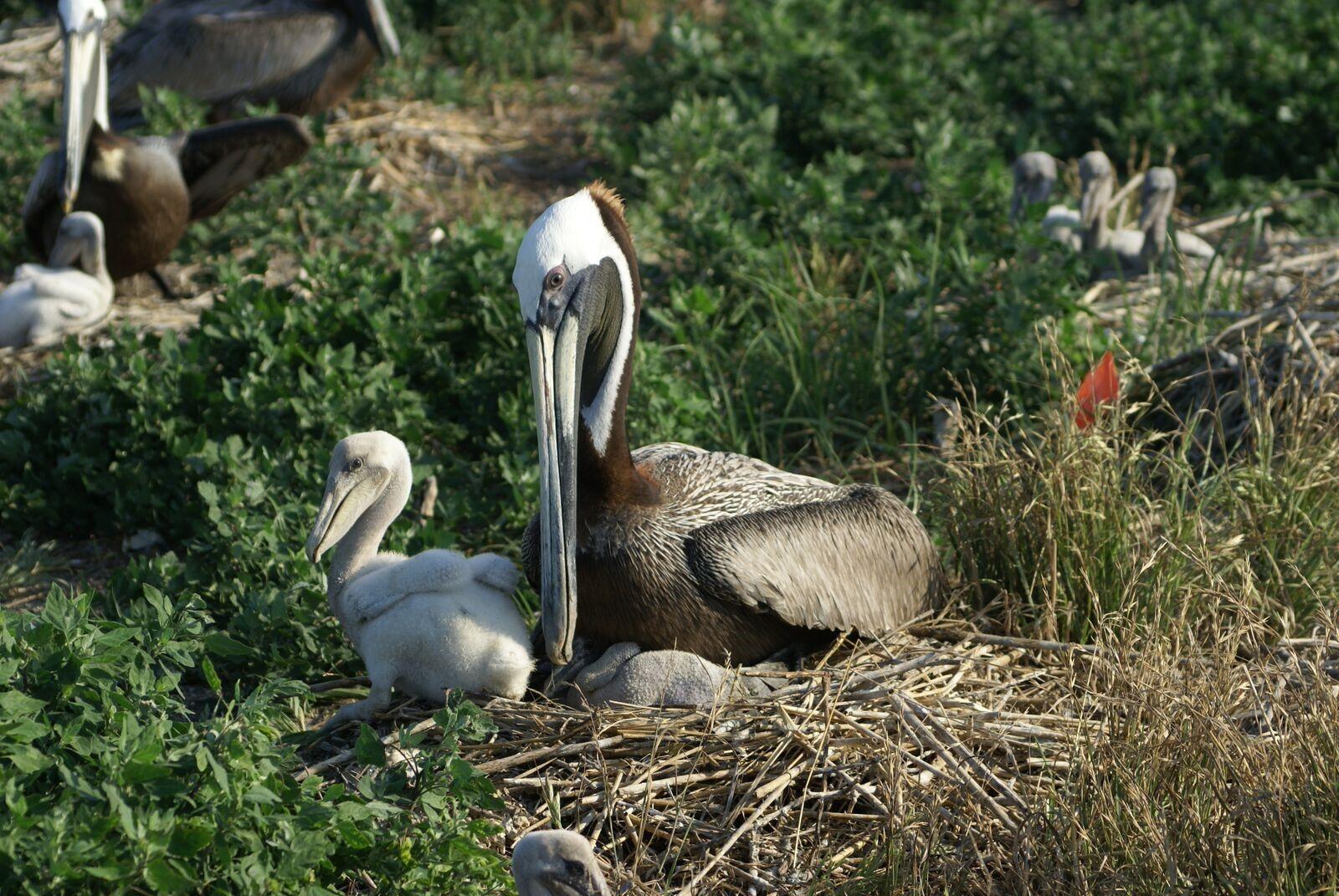 A nesting brown pelican and chick settle on Crab Bank during a previous nesting season. Researchers with the South Carolina Department of Natural Resources expect the brown pelicans to return to Crab Bank this year due to the restoration project.

Crab Bank is a viable option for pelicans, skimmers, gulls and other coastal bird species. During Crab Bank’s most successful summers, it was home to nearly 5,000 nesting birds.

Representatives from SCDNR and USACE, along with Governor Henry McMaster, Congresswoman Nancy Mace and Mount Pleasant Mayor Will Haynie attended a ribbon-cutting ceremony to official announce Crab Bank’s reopening for nesting season and congratulate collaboration among many organizations to bring the project to completion. Mace said this project is an example of good government working together for the community.

During the Post 45 Charleston Harbor Deepening Project, USACE found that the dredge material gathered from the project would be suitable for Crab Bank, but it would be more costly to move the dredge material to Crab Bank compared to a placement site. SCDNR signed a cost-share partnership agreement with USACE to become a non-federal sponsor of the project and provide money to offset the additional costs.

SCDNR collected public funds with a campaign organized through the S.C. Coastal Bird Conservation Program. Many businesses, organizations and individuals contributed to the fundraising project. Coastal Expeditions, Coastal Conservation League and Audubon South Carolina were some of the project partners.

Through the partnership with SCDNR, USACE was able to use 65 percent federal funds and 35 percent non-federal dollars.

“This is one of the few things you can actually replenish and you can build it again and it works,” said McMaster at the ceremony. “The way that nature works is the birds are coming back.”

The Crab Bank project comes at a time when coastal birds in South Carolina are on the decline – nearly 75 percent of coastal birds in the state are considered a high conservation concern, said Sanders.

Sanders said Crab Bank can be added to the list of conservation accomplishments in South Carolina. Now, the coastal birds have a safe place to nest away from predators.

Due to coastal erosion and other coastal events, over the last several years Crab Bank became a narrow strip of land unsuitable for nesting coastal birds. This caused the birds to search elsewhere for a nesting site. However, Thibault said there weren’t many safe options, other than several designated SCDNR bird sanctuaries.

The restoration project was a one-time placement of dredge material that is expected to last for 50 years.

During the planning process for the Crab Bank project, the Town of Mount Pleasant raised concerns about the original placement plan of the dredge material being too close to Shem Creek and potentionally causing shallow waters for boaters.

“We’re not opposed to the rookery. We think a rookery has many positive benefits, but we don’t want the placement or the amount of dredge spoil to raise hazards for all of these aspects of the Mount Pleasant waterfront,” said Haynie in January 2021.

The Town and USACE worked together to create a plan that would fulfill the project’s intentions while considering the impact on Shem Creek.

Now that the project is complete and the birds are returning, boaters and kayakers can observe the improved bird sanctuary from a distance. Crab Bank is closed to the public from March 15 to October 15 to protect the nesting coastal birds.

News
Child abuse is prevalent in every community, according to experts 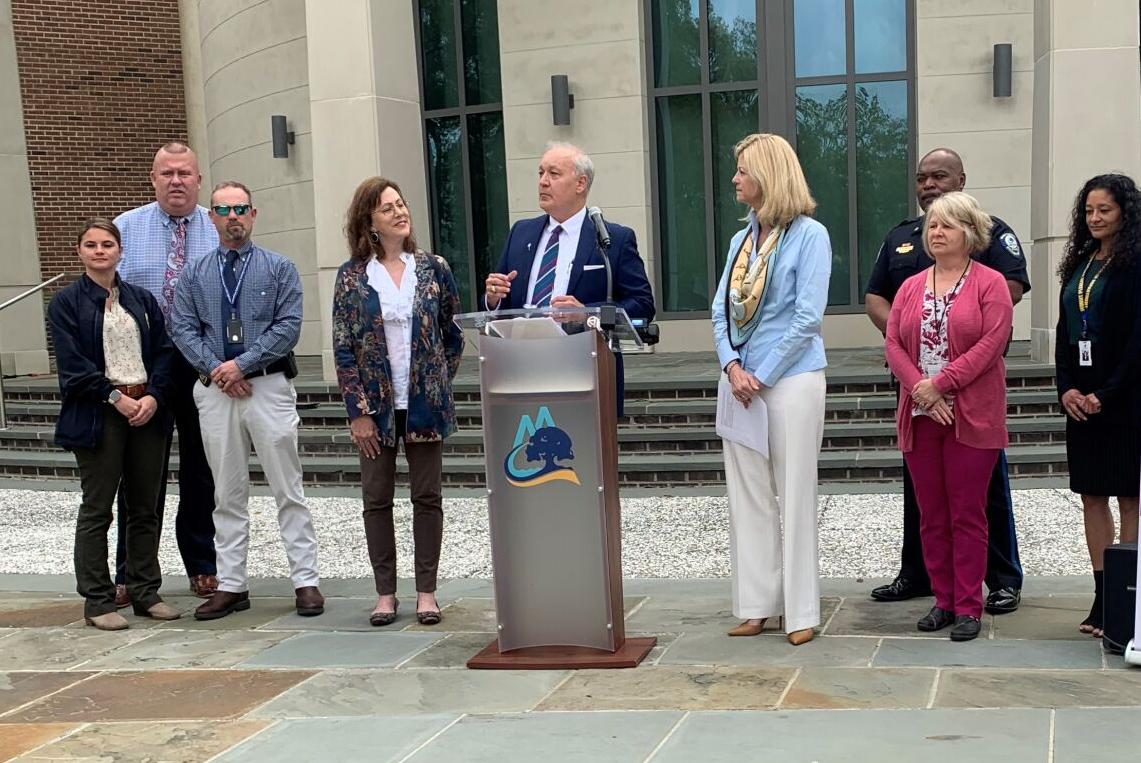 Across South Carolina, there were nearly 16,000 investigations of child abuse and neglect over the last year. Child abuse occurs in every community regardless of socioeconomic status, race and gender, according to local experts.

“It happens here. It happens in my neighborhood. No family is immune,” said Beverly Hutchison, the executive director of Dee Norton Child Advocacy Center.

As a Children’s Advocacy Center (CAC), Dee Norton provides a multidisciplinary collaborative response when there is a concern for abuse by bringing together social services, law enforcement and health professionals to help the victim through forensic interviews and therapy services. Last year, Dee Norton assisted 829 children living in Charleston and Berkeley counties with 80 of those children from Mount Pleasant.

The goal of Child Abuse Prevention Month is to educate, advocate and communicate in an effort to protect children in the community.

“One more abused child is too many,” said Mayor Will Haynie during a Child Abuse Prevention ceremony at Town Hall on April 5. Haynie designated Mount Pleasant a “Pinwheel City” to commemorate the month. The pinwheels – a national symbol for child abuse prevention – represent the innocence of youth that is often taken by abusers.

“The pinwheel stands for the happy, healthy childhoods we want every child to experience. However, we know that there are too many children who experience challenging childhoods and trauma,” said Erin Pate, a board member for Children’s Trust of South Carolina. 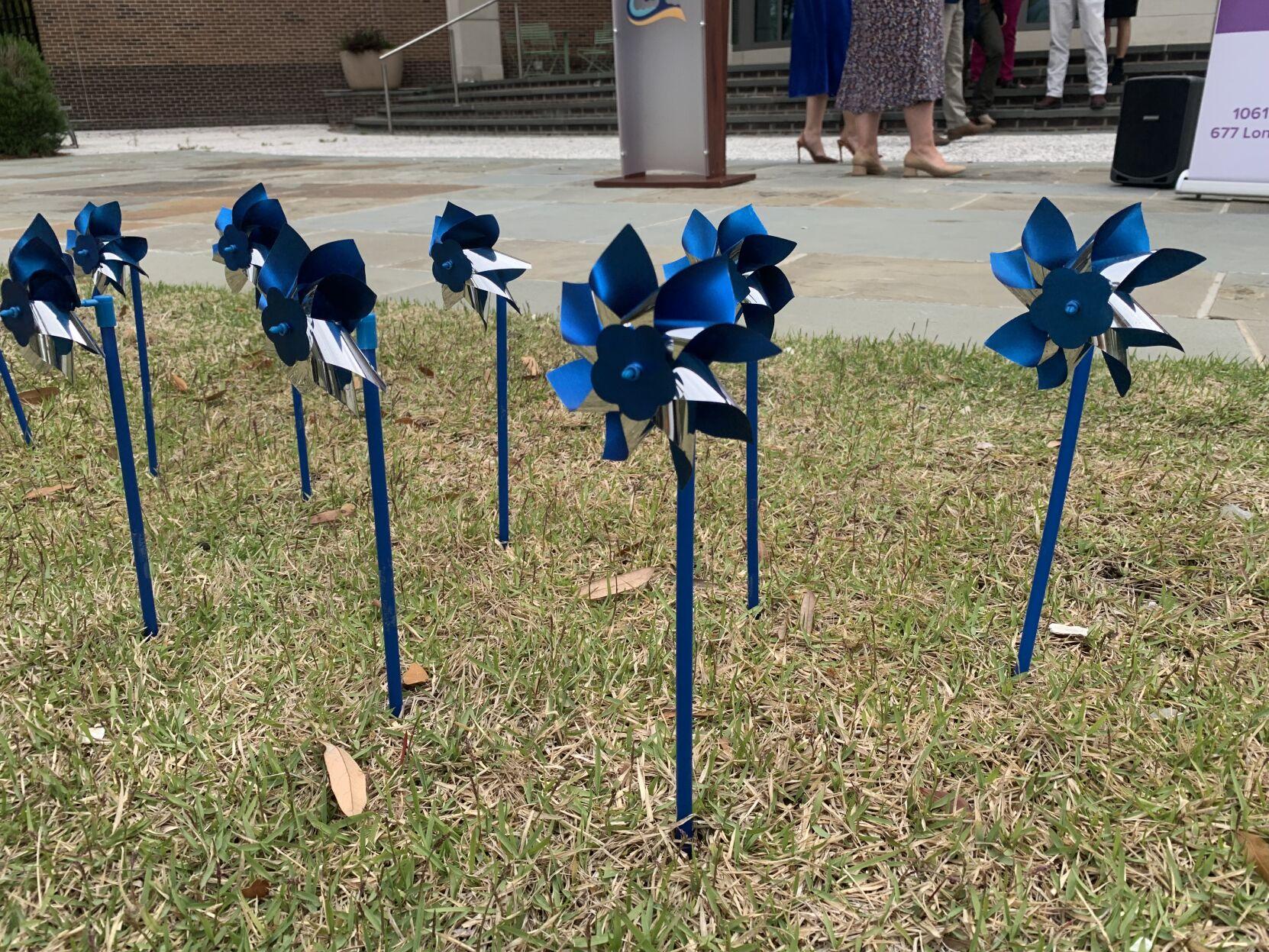 Pinwheels for Child Abuse Prevention Month are on display on the lawn in front of the Town Hall building.

In South Carolina, 62 percent of adults reported an adverse experience as a child, according to Children’s Trust. Pate said that children who experience trauma are more likely to struggle with depression, alcoholism, obesity and other long-term health issues as adults, which are problems that can “take a heavy toll on communities.”

“All children should thrive, that they should live in secure families and be surrounded by supportive communities,” said Pate.

In Mount Pleasant, several facets of the community work together to prevent child abuse. Through the Mount Pleasant Police Department, people can speak with a victim’s advocate whose job is to support those experiencing a traumatic situation. Additionally, Dee Norton is certified to work with the police department in collecting evidence for cases against abusers.

“Here in our community there is a response for children where there’s been a cause for concern. It’s collaborative, it’s compassionate, it is the best thing for our children and families who have experienced this,” said Hutchison.

Debbie McKelvey, the executive director of Windwood Family Services, said it is the responsibility of trusted adults to keep children safe.

McKelvey added that parents should put practical safety measures to practice, such as a “safe word” that children ask unfamiliar adults when approached. She said most schools, camps and churches in the area have systems in place to prevent children from being picked up by an unknown person.

Hutchison said communication between trusted adults and children is vital. She said children should understand boundaries and feel empowered to uphold those boundaries, including the choice to be hugged by a family member or friend. Children should know who their trusted adults are, so they will feel comfortable initiating conversations surrounding the topic, Hutchison added.

McKelvey said parents should make sure these conversations don’t make children afraid of the world, but understand that there are trusted people in the child’s life that keep them safe. She added that parents should be aware of any changes of behavior in their children or different ways they are interacting with peers or adults.

Hutchison encourages community members to speak up against child abuse. Whether it’s noticing a suspicious situation and saying something about it or participating in child abuse prevention efforts. During Child Abuse Prevention Month, people can sign a pledge from Dee Norton or Children’s Trust to show support for children in the community.

Dee Norton provides tips on how to report abuse:

News
Contestants tell us what they like about our County Parks 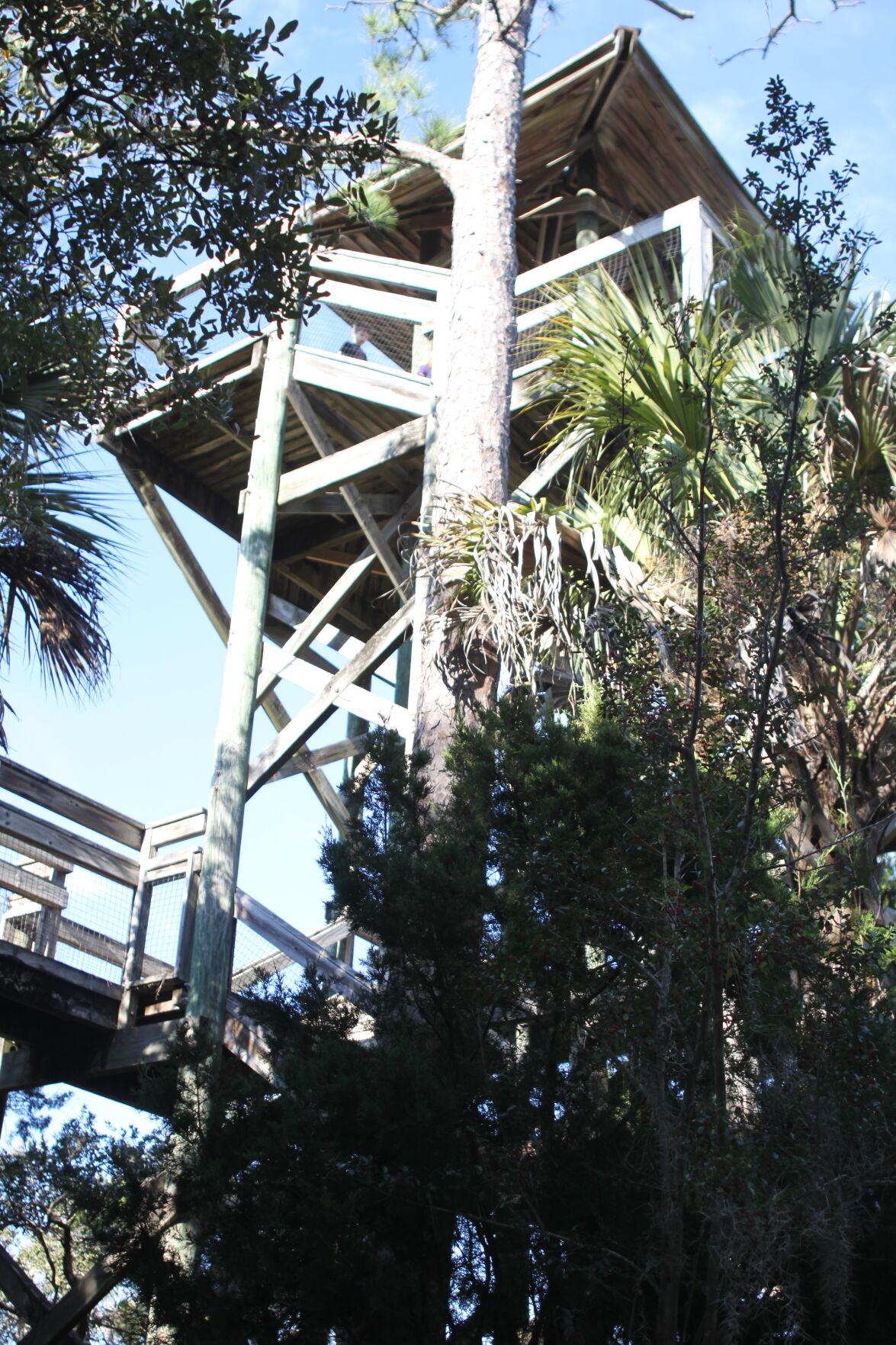 The observation tower is 50 feet high and offers great views of the park.

As the grand finale to the Moultrie News series on our Charleston County Parks, we asked readers to share their opinions with us (and possibly win a Yeti cooler and an annual Gold Pass to the parks). Sponsored by Palmetto Islands County Park, the contest gave us opinions that were as varied as our parks system, but several stood out.

The parks with the most facilities and events are the most popular. People love the the trails at Palmetto Islands County Park for biking and walking, the Christmas lights at James Island County Park, and the beach access at the Isle of Palms.

In their opinions, though, the most mentioned amenity was the incredible access to marsh views and nature. Some readers shared that they were regulars to parks, especially the ones in their neighborhood. Most treasured the peace and quiet they find in the more passive parks like the Pitt Street Bridge and Caw Caw.

And of course, several mentioned their dogs who had places to stretch their legs.

Here’s a sampling of their comments:

We love the awesome bike paths, and crabbing off the docks. Our kids have been able to grow with the park from playing on the playground when they were tiny, to biking/pedal boating as teens. — Catherine Lobb

Isle of Palms County Park: It has lots of parking and I usually can get in all summer long. I love the beach access, outdoor showers and picnic tables. The staff is extremely friendly and I adore coming back every chance I get. — Belle Conner

The ever changing Isle of Palms beach can provide sharks teeth and a beautiful olive shell the next day. No two visits are the same making it fun for the youngest to the oldest to seek new discoveries. — Peggy Tapager

An ever improving park adjacent to an ecosystem that is beautiful and ever evolving. — Steve Reinschmidt

James Island County Park: It has EVERYTHING perfect for a busy and active family. My children always request going the JICP whenever we get a chance to get out and have some fun! — Jennifer Goodall

It has the most beautiful trees, and every Christmas they have the most wonderful Festival of Lights! It has been a treat for our family since they started it. I also loved the Splash Zone! This helped me as a single mom to take my kids safely to swim and have a blast! I love the Cabins. We stayed several times and had the best staycation ever! I love James Island County Park. — Deirdre Haneman

Waterfront Park: The scenery is second to none! — Ray Richards

If you would like to read our series, go online to postandcourier.com/moultrie-news/

As we visited the many public parks in East Cooper when doing our Walk in the Park series, we discovered there is a wide range of natural spaces and thoughtfully planned parks throughout the area available to residents. 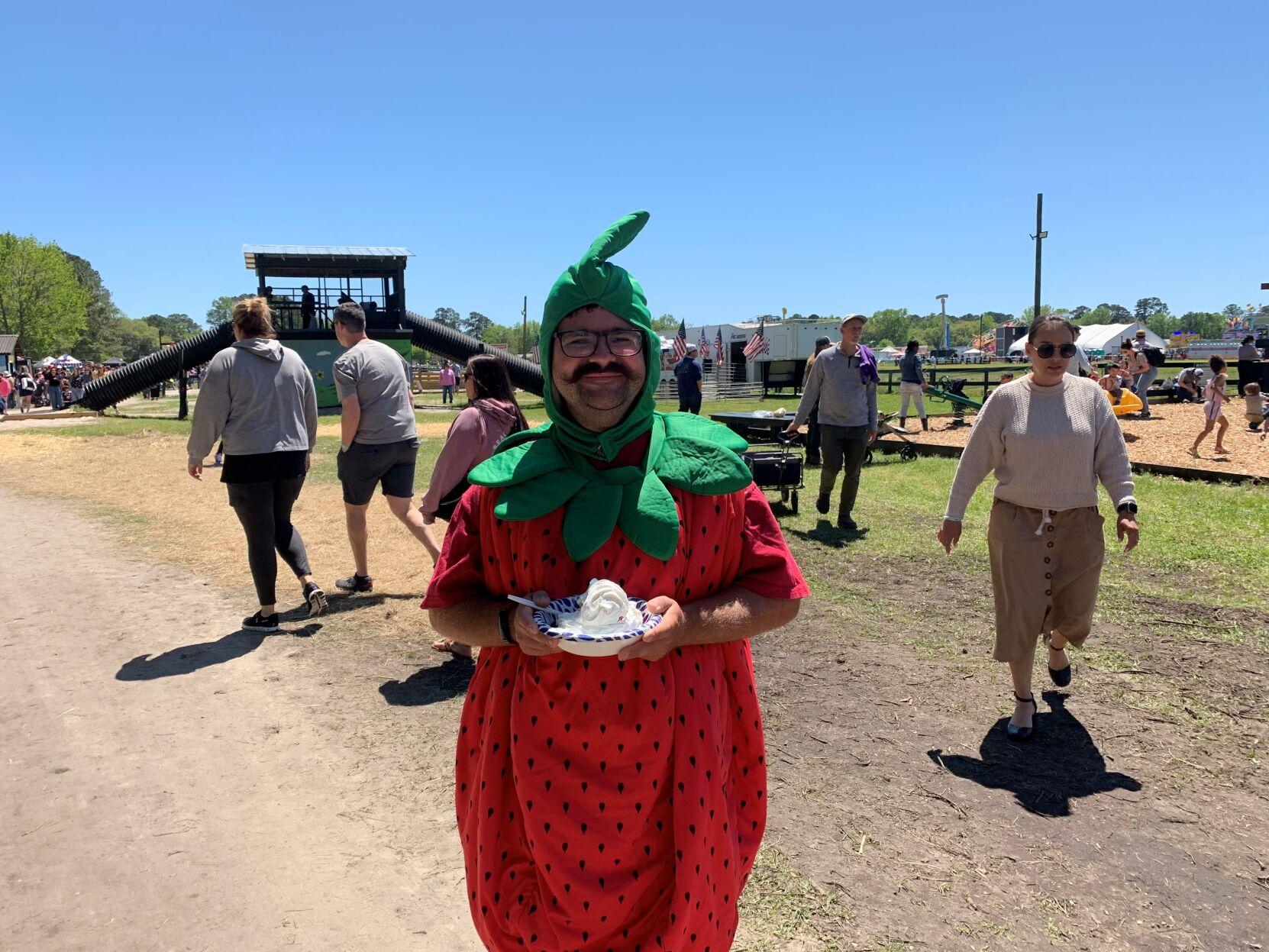 Mark Vito, who works at Boone Hall, wore a strawberry costume to the festival.