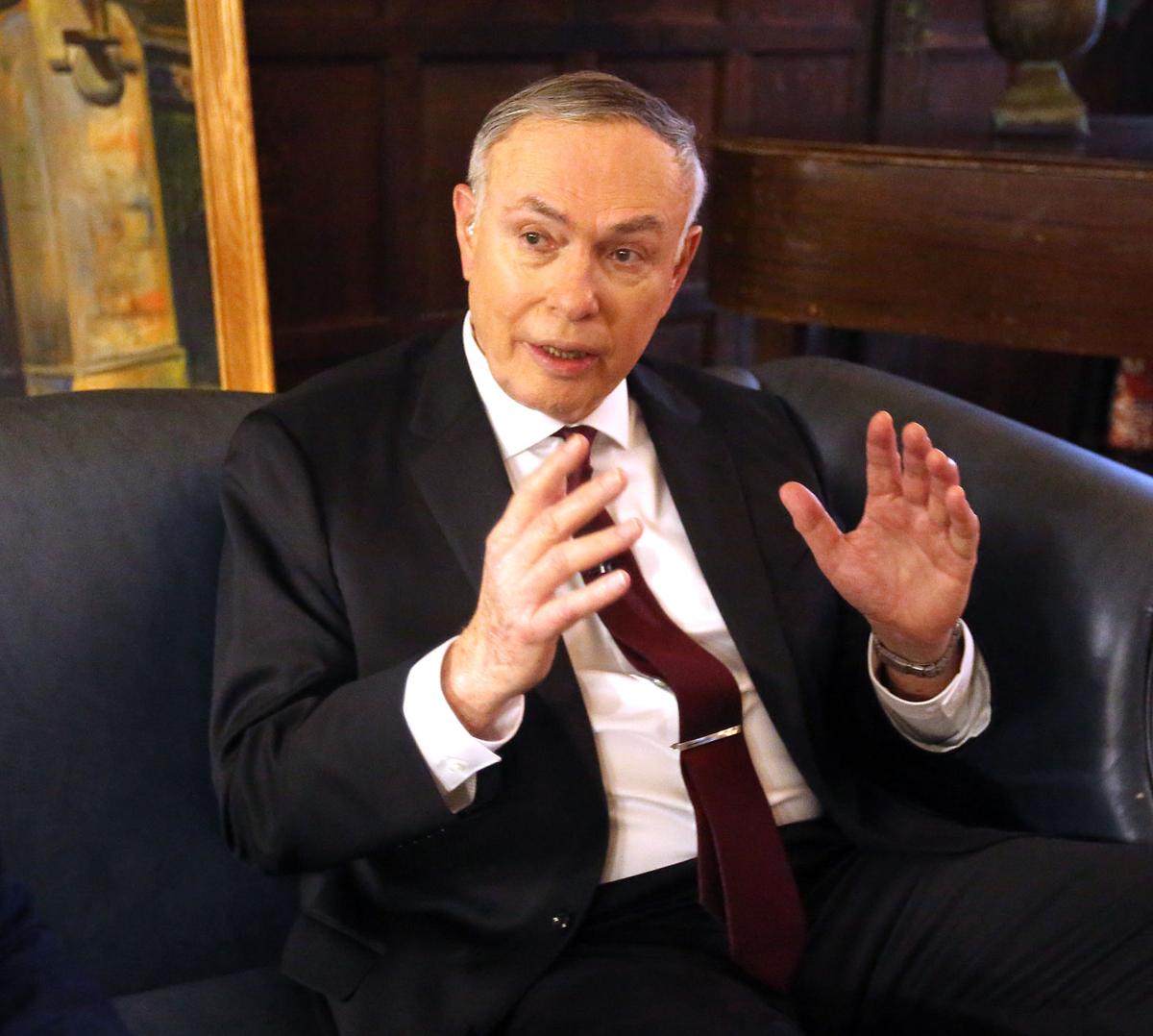 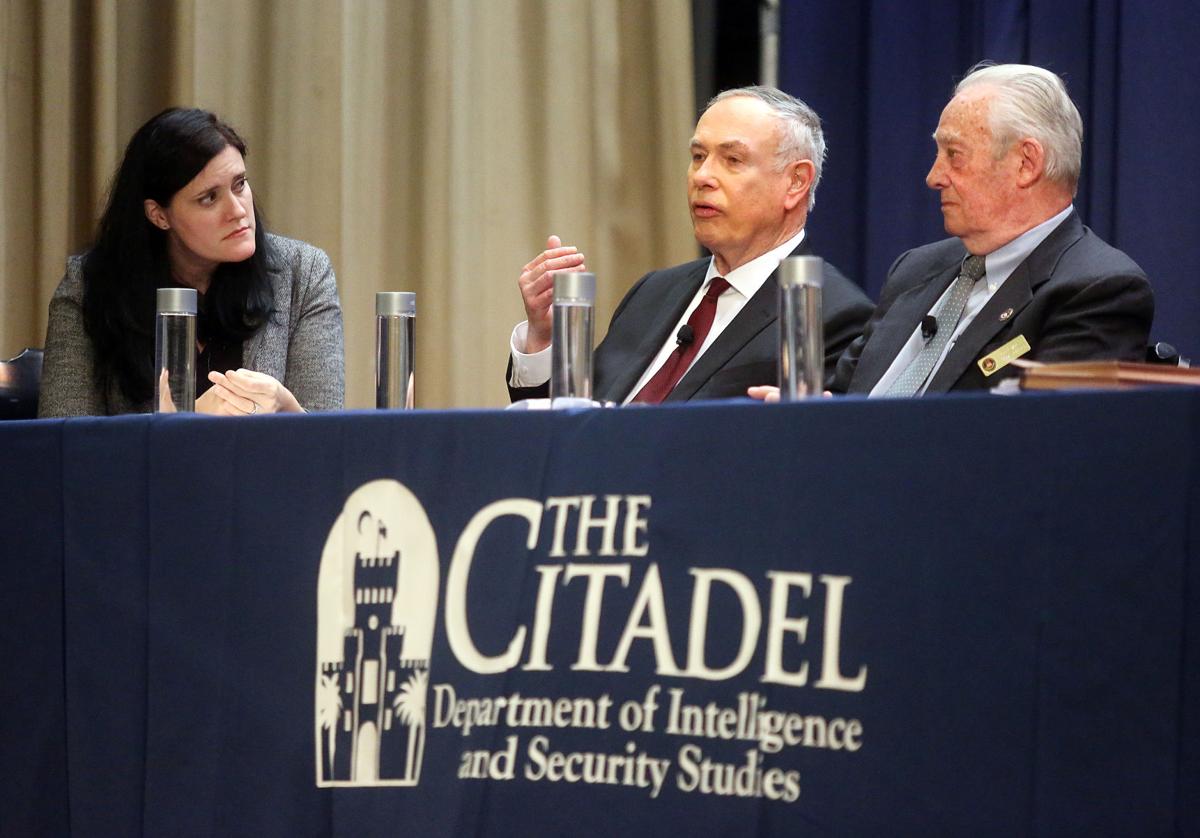 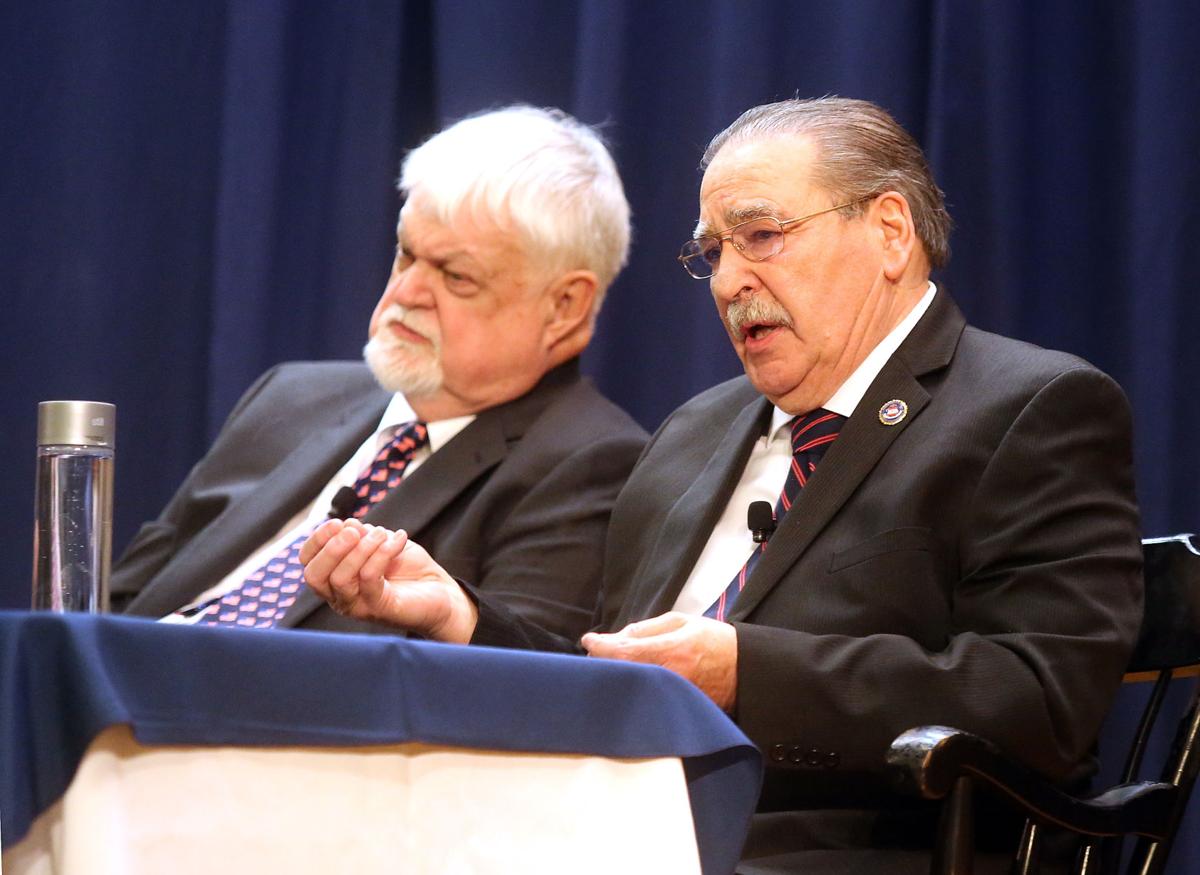 The Watergate lead investigator Angelo Lano (right) explains what was found during the initial Watergate investigation during a panel discussion Wednesday night, February 12, 2020. The 2020 Intelligence and Ethics Conference at The Citadel reunited the FBI’s lead investigators for the Watergate break-in for the first time since the scandal happened. Brad Nettles/Staff

The last time the FBI's five lead investigators in the Watergate Hotel break-in case were together was when President Richard Nixon resigned the presidency in 1974.

Nearly 50 years later, the now silver-haired special agents gathered Wednesday night at The Citadel to reflect on the case that made their careers.

Decades have passed, but history seemingly tends to repeat itself.

John Minderman was the weekend on-call case agent on the day of the Watergate Hotel break-in during the early hours of June 17, 1972.

He would help investigate and connect the crime to Nixon and his White House.

Minderman said the current headlines seem all too familiar as comparisons between the Donald Trump presidency and the Nixon era have been scrutinized by media outlets across the country.

"I see striking parallels between what we were forced to go through and what's happening today," Minderman told The Post and Courier.

"Watergate was a political perversion. It was a criminal act; it was a felony. It was perpetrated to some extent by foreign nationals. There was the CIA and FBI investigating this and information was being leaked to the press," he said.

Some of the men are aware of the historical parallels between 1972 and 2020. Claims of a politicized FBI. Presidents facing impeachment. Evidence of election tampering and party hacking. And world tensions, including, just like then and now, places in the Middle East.

While many of the investigators shied away from comparisons from current events, they didn't pull any punches when reflecting on the Watergate break-in, which started when several burglars were arrested at the Democratic National Committee office located in the Watergate complex in Washington, D.C.

That led to a two-year investigation that was reported to the public in real time largely by Washington Post reporters Bob Woodward and Carl Bernstein. The duo won a Pulitzer Prize for connecting Nixon's Committee to Re-Elect the President (known as CREEP) to the break-in, which ultimately led to the Republican's resignation in 1974.

This was made possible by an informant the Post reporters dubbed "Deep Throat," who was revealed in 2005 to be Mark Felt, the former associate director of the FBI.

The agents this week didn't speak kindly of Felt or the Post's reporting.

"He didn't save the Republic. It was the hard-working agents on the ground that solved this," said former FBI investigator Paul Magallanes.

"Felt was an outlaw. He breached his oath by leaking," Magallanes said. "He wasn't a hero. He was a bum."

Magallanes was instrumental in the Watergate investigation.

Minderman said Magallanes developed sources in the D.C. area who were Cuban nationals. Because Magallanes spoke Spanish, he gained their trust and ultimately established the money connection between CREEP and the Watergate burglary.

Angelo Lano, the lead investigator assigned to Watergate, told The Post and Courier that Woodward and Bernstein's reporting was causing headaches. People the FBI were interviewing discretely were worried they'd be outed in The Washington Post.

Ultimately, Lano felt like the reporters were taking credit for the FBI's hard work.

"It was upsetting that the results of our investigation were being publicized," Lano said. "It's distracting. It takes the emphasis out of the people conducting the investigation."

In total, 69 government officials were charged in connection to the scandal, and 48 of them were found guilty.

On Aug. 9, 1974, Nixon resigned the presidency from the Oval Office saying "because of the Watergate matter I might not have the support of the Congress that I would consider necessary to back the very difficult decisions and carry out the duties of this office in the way the interests of the Nation would require."

The five investigators have only kept in touch through email, occasional visits and phone calls. But this gathering in Charleston was the first time they were able to get the whole group back together.

Lano said they told jokes, exchanged funny stories about the investigation and reminisced on how tough it was.

"During the Watergate investigation, it was very hectic," Magallanes said. "But we had Angelo as a maestro, and we were his instruments. He directed us and we, together performed a beautiful symphony."