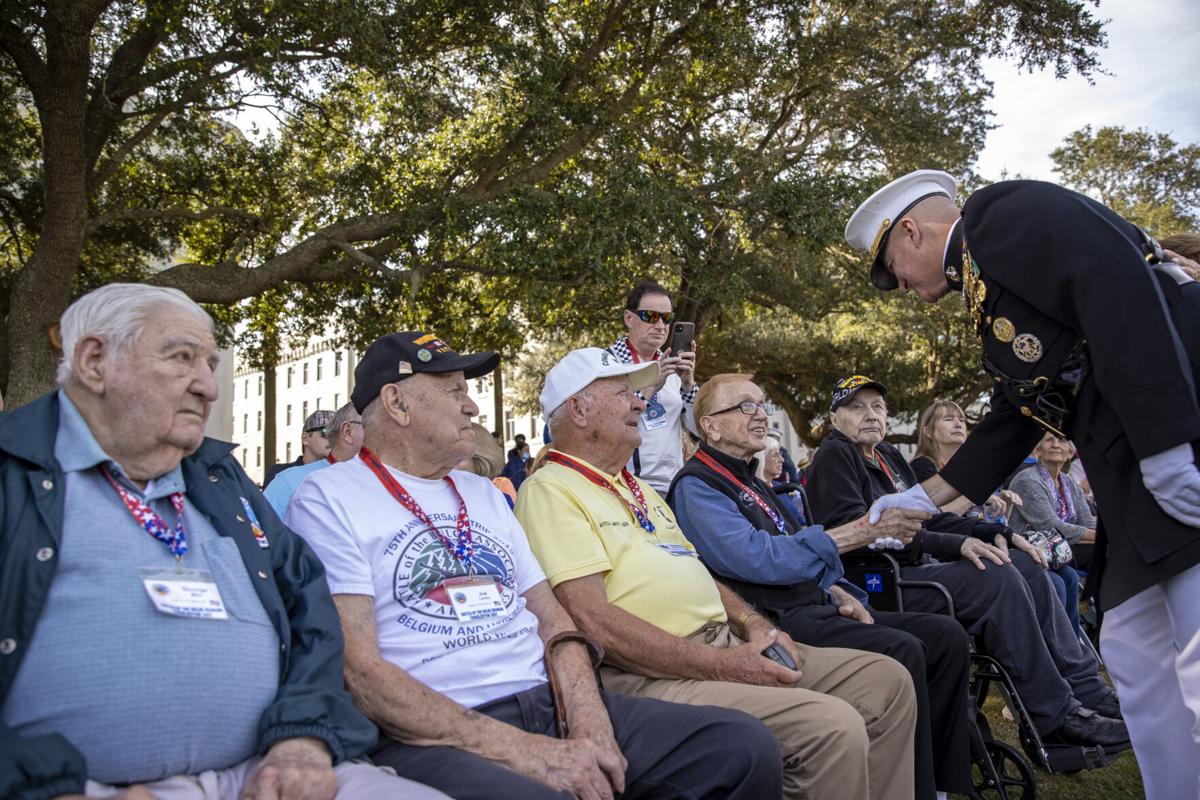 Retired Marine Corps Gen. Glenn Walters, the president of The Citadel, (right) shakes hands with David Bailey among six other veterans of Battle of the Bulge visiting campus on Friday, Oct. 22, 2021 for their annual reunion in Charleston. Andrew J. Whitaker/Staff 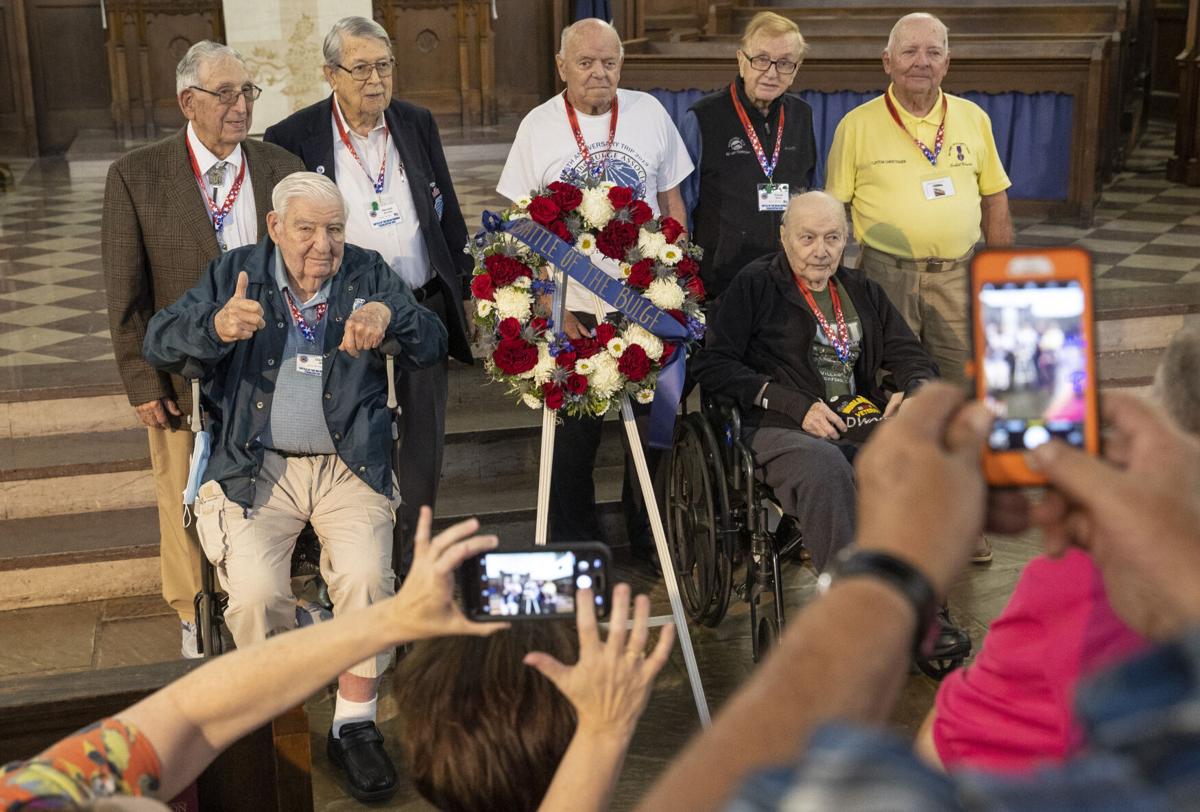 Seven veterans of the Battle of the Bulge take photographs in front of a memorial wreath inside Summerall Chapel while visiting campus on Friday, Oct. 22, 2021, for their annual reunion in Charleston. Andrew J. Whitaker/Staff

Seven World War II veterans from the Battle of the Bulge, the stingy winter defense put up by the Army, came to The Citadel as part of the soldiers' historic reunion this weekend in the Lowcountry.

The veterans are some of the few remaining soldiers from one of the most important battles of the European front.

Vernon Brantley, 97, is from Kentucky and moved to Columbia after the war. He was just 19 years old when he was in the woods in Belgium, fighting against the German military. He received a Purple Heart during combat.

Brantley said the number of surviving veterans from the battle has dwindled every year. That's why he's grateful when he can get together with others.

"It's hard to put it into words," Brantley told The Post and Courier on Oct. 22. "You try to remember the good times and forget the bad times. You have to enjoy the moment. It's just such a blessing to see another day. This is probably the last reunion for most of us."

Between December 1944 and January 1945, German forces attempted one last major offensive against the Americans in the heavily forested Ardennes region between Belgium and Luxembourg. It was one of the largest battles in the Army's history, with more than 600,000 soldiers taking to the frigid forests to fight. More than 80,000 Americans died, equating to 10 percent of all U.S. casualties in World War II.

After the German military's defeat, they were forced to retreat for the remainder of the war.

This winter will mark the 76th anniversary of the fight. Living veterans from the battle and their families were supposed to meet in 2020, but plans for the reunion were sidelined due to the COVID-19 pandemic.

It's nearly impossible to calculate the number of Battle of the Bulge veterans who are living across the country, but many of them are in their mid 90s to early 100s.

Jim Triesler, a volunteer historian with the Battle of the Bulge Association, said the reunion of the seven living soldiers in Charleston is a momentous occasion.

"There are maybe 2 or 3 percent of the veterans from the Battle living now," Triesler said. "We're just thankful to have seven here. This is a big deal."

The living Battle of the Bulge veterans and their families were given a tour of The Citadel's campus by cadets, attended a service in Summerall Chapel and watched a formal dress parade on the quad.

Retired Marine Corps Gen. Glenn Walters, president of The Citadel, said he was honored to have the soldiers on campus and shook their hands. He also pointed out that nine of the names on the campus' War Memorial died in combat at the Battle of the Bulge.

“The Citadel is privileged to host and recognize these American heroes,” Walters said in a statement. “We’re proud to have these men, who made our country what it is today, on campus and to thank them and their families for their selfless service and sacrifices.”

Gerald White, a 95-year-old Battle of the Bulge veteran, was 18 when he was in the war.

"I've been all over this state, but this is my first time at The Citadel," White said. "It's an honor."

The number of living World War II veterans, who would later be dubbed members of “The Greatest Generation,” are slowly fading away. According to U.S. Department of Veterans Affairs statistics, 240,329 of the 16 million Americans who served in World War II are alive in 2021.

In South Carolina, there are at least 3,000 living WWII veterans.