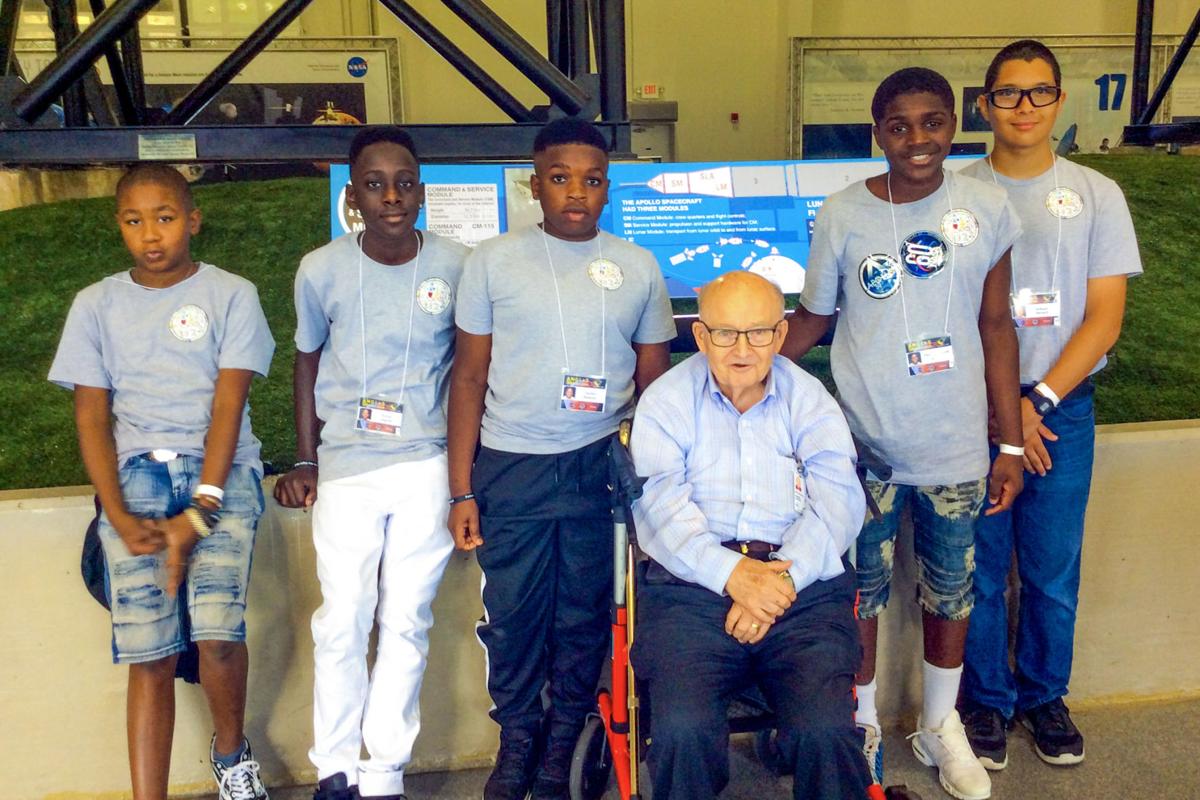 The Spacenauts attended a dinner where Fred Haise, an Apollo 13 astronaut, gave a speech. Provided 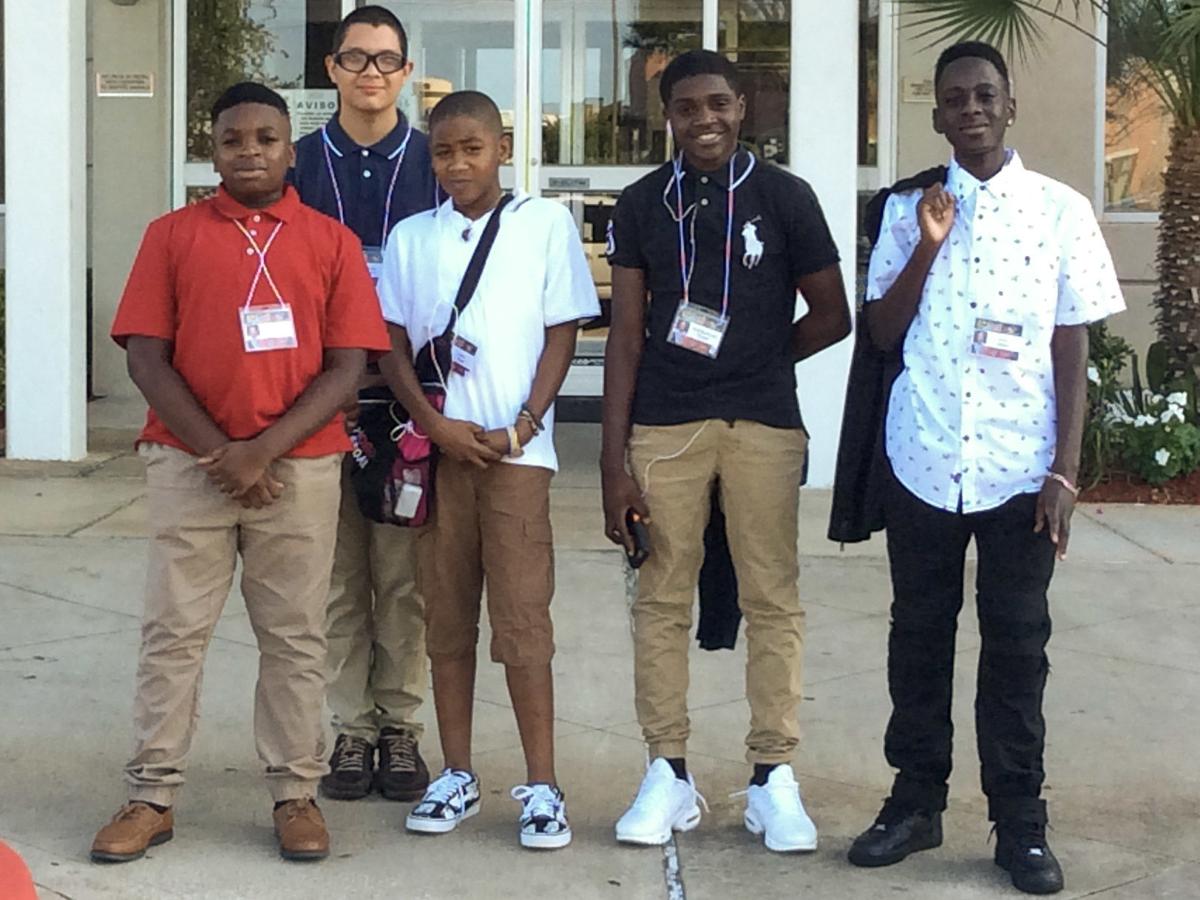 The Spacenauts, an all-boys STEM team from Military Magnet Academy, won the grand prize of an all-expenses-paid trip to the Johnson Space Center in Houston in August. Provided

This year marks 50 years since NASA’s Apollo 11 landed on the moon. In 1969, the world watched in amazement as astronauts Buzz Aldrin and Neil Armstrong took the first lunar steps while Michael Collins orbited the moon.

July 20 was the official anniversary, and to celebrate this unprecedented historical event, local students took to their STEM inventions to recreate the Apollo 11 mission in the form of a lunar module replica — a drone to carry it and a LEGO robot called Mindstorms EV3.

The inventions were showcased at a competition called “Apollo Next Giant Leap Student (ANGLeS) Challenge” sponsored by the NASA South Carolina Space Grant Consortium from the College of Charleston. It took place at Military Magnet Academy in North Charleston on July 18, just two days before the moon landing’s 50th anniversary.

This competition gave local students, as well as a team from North Carolina, the chance to show off their STEM skills. The teams were required to build a replica lunar module and successfully land it on an 8-by-10-foot map of the moon’s surface using a remote-controlled drone. They then had to modify and program a LEGO Mindstorm EV3 robot to explore the lunar surface and bring back a rock sample. The LEGO Mindstorm is a programmable robotic construction set that can walk, talk and move.

The Spacenauts took the win and were awarded with the grand prize of an all-expenses-paid trip to the Johnson Space Center in Houston in August. They presented their robot along with 100 other teams nationwide at the space center, took an exclusive behind-the-scenes tour of the facility and attended a dinner where Fred Haise, an Apollo 13 astronaut, gave a speech.

“This was an adventure that most Americans and visitors do not get to see firsthand. During the three-day visit the students learned what it takes to build a rocket that will take the astronauts into space, what type of food they eat while they are there during their six-month rotation and what kind of work they do while they are in space,” said Jerry White, the sixth-grade leadership instructor at Military Magnet Academy. “If the average visitor went to NASA Johnson Space Center, they would not get anything close to what these students got to experience. It was an awesome trip.”

For Military Magnet Academy’s Principal Robert L. Perrineau, the opportunity to hold the competition at his school was priceless.

“The goal of exposure and participating in programs or activities that provide our scholars with the opportunity to explore and see other parts of the country and world is a part of the holistic approach to education we want to provide as a school,” he said. “This was probably one of the best marketing opportunities for our school. This definitely helps with changing the perception that our school is a discipline school, as well as providing the general public a small glimpse into what our cadet scholars do. It definitely has helped increase the inquiries about enrollment.”

Carla Perrette-Clark, CTE instructor of information technology at Military Magnet Academy, who is also in charge of the school’s robotics and cybersecurity team, agrees.

“These programs are important because it promotes college and career readiness and exposure to STEM-related career fields. It also teaches our students about leadership, collaboration, team-building, sportsmanship and community outreach," she said.

This was a part of the summer robotic program, made up of 10 students in all, held annually at Military Magnet Academy. Next year’s winners will attend the July 2020 launch to Mars at Cape Kennedy.

Perrineau says he wants to support the students in their space endeavors beyond the summer program.

“We want to offer support in the form of human and fiscal resources to ensure our cadets continue the work they've started with robotics, drone technology, cybersecurity and using technology to prepare for the future. I am ecstatic that our scholars could be ambassadors for our school but also the state of South Carolina in this endeavor. We look forward to any opportunities in the future that will allow these cadet scholars to showcase their talents.”

School Spotlight: Pinewood’s STEM program gets kids ready for the jobs of the future