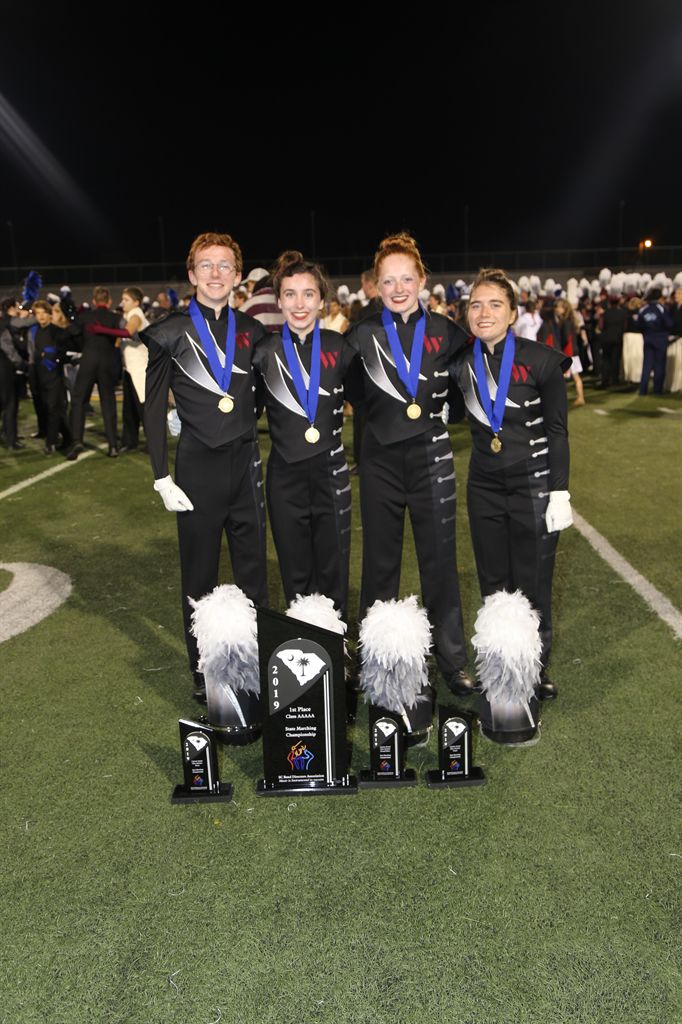 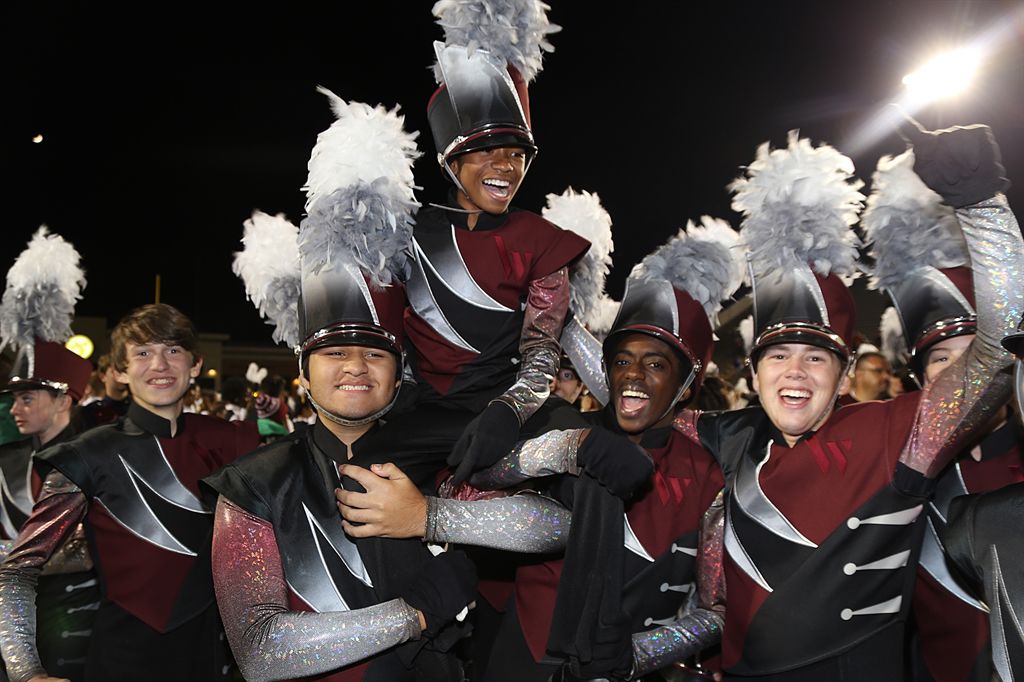 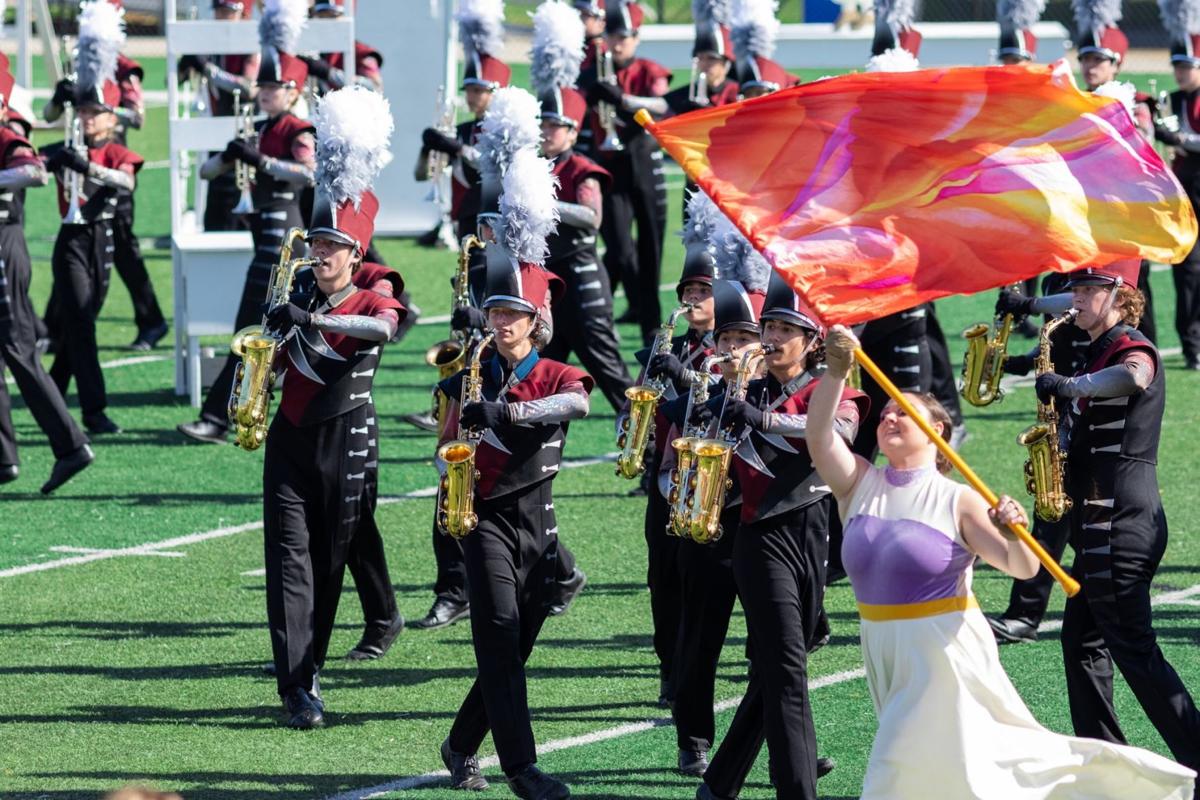 This photo was taken at the state competition in Columbia at Irmo High on Nov. 2, 2019. Provided

His students turn down rock concerts so that they don’t miss a competition, game or practice. As section leaders, the juniors and seniors are role models to their sophomore and freshman teammates as they assume responsibility for the mistakes of their younger comrades.

These are kids who know what it feels like to turn a room full of people into mush with their musical talents. They know the thrill of getting into the minds and hearts of their audience. At such young ages, these high school students already know how to dig deep into themselves to bring out their best.

This is what it is like to be a high school marching band member at Wando High School and, in their quest to pursue music, they have snagged a record of winning the most 5A State Championships of all time — 12 in fact — which has never been done before.

“It takes a mix of blood, sweat and tears, of course,” says Bobby Lambert, director of bands at Wando High School. “But what it really comes down to is heart and after a while, the practices do not feel like a chore, but rather, a choice.”

He said the band is a mix of mental awareness, physical fitness and emotional conviction. Not to mention all the people involved — challenging the meaning of teamwork to its core.

School Spotlight: Students at University School of the Lowcountry conduct exit polls and learn the value of a vote

“Let’s face it. If the person beside you misses a step, you could fall down and cause others to fall down, too. In marching band, you are going to want your teammates to know the routine just as well as you do,” Lambert says.

When it came to winning state for the 12th time, Lambert says he couldn’t have been more thrilled for the kids and all the hard work they put in.

“We knew we did a great performance. We were high-fiving each other on the field afterward and hugging. We almost had to be pushed off the field. It was definitely memorable,” he says.

The 5A State Championship was held on Nov. 2 in Irmo. Not only did the marching band at Wando win the overall performance, but it also received top marks in every caption category for music performance, visual performance and overall effect.

There were originally 118 bands participating in the Bands of America Grand National competition, held in Indianapolis, but that dwindled down to 30 and then to 12, and Wando took sixth place.

And, although the marching band season is now complete, the musicians are in the middle of concert season. The program, in total, consists of color guard, symphonic bands, jazz/percussion ensembles, chamber ensembles and the marching band, of course.

The band will ramp up again in April with preliminary practices, meeting only a few times before the summer. In June and July, it will practice about three times every two weeks.

In August, it will have two weeks of band camp for multiple hours a day, and then around the third week of August, it will start practicing after school for 2½ hours three times a week. It also will practice for 12 Saturdays in the fall from 8 a.m. to 12 p.m., breaking for lunch and returning from 1:30 to 5:30 p.m.

There 236 students in marching band, but including the three middle schools — Cario, Laing and Moultrie — East Cooper has over 900 students and families participating in band at some level.

E.C. Setser, president of the Wando Band Boosters, says, “I admire these kids so much. They have had such an incredible year, and to set that record was icing on the cake. I have never seen any other sport or activity that exemplifies camaraderie the way marching band does.”

Her son, Brady Setser, is a freshman in the marching band at Wando High School. He plays French horn for concert band and mellophone for marching band. “Band has taught me time-management skills. When you have practice, you cannot waste time. It felt great accomplishing such an amazing goal for our school and seeing everyone come together.”

Audrey Marx, a senior at Wando, has been in band for eight years and plays oboe in concert band and mellophone in marching band.

“After they announced our name as first place, I could feel the anticipation to break ranks and celebrate our incredible season and victory with each other. Making the record was awesome, but what is even more meaningful are the memories which I will forever have from my time spent here.” Marx says.

“Being in band is definitely a unique experience. The Wando Band is truly a second family to me," Marx continues. "For anyone even thinking about participating in band, I cannot recommend it highly enough. While it may seem like an insurmountable task, and it is challenging, it will be the best decision of your life. I would not trade my experience here for anything.”

On Jan. 17, The Bands of Wando Foundation will hold its annual fundraising gala on the Yorktown from 6:30 to 10:30 p.m. The theme will be Mardi Gras. For more tickets and/or sponsorship, contact Liz Potter at lizpotter@yippeeo.com.

For more information on the Bands of Wando, visit www.wandobands.org.