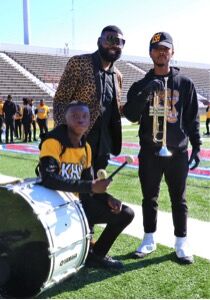 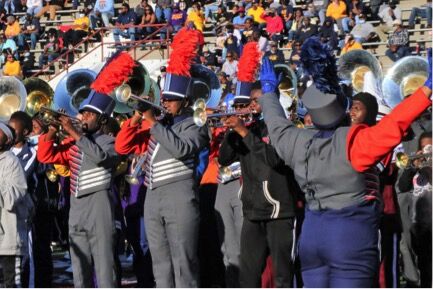 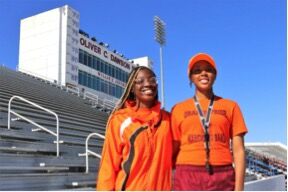 After practicing in the morning, the schools formed a mass band with high school students intermingled among Marching 101 members for a halftime show like no other. Bands traveled from as close as Orangeburg-Wilkinson High School (O-W) and as far away as Chicago.

Patterson was the Marching 101’s trombone section leader in the late 2000s, which shaped his career in music education.

“I had an amazing experience under the direction of Eddie Ellis,” Patterson said. “I had a great time here and it changed my life. That’s why I wanted to become a band director.”

Among his Kingstree students was Donte’e Spates, who has been playing drums about four years.

“I just like to play music. I like to play and move at the same time,” Spates said. “I like the way I can take out my energy on the drum.”

Patterson said he hoped Kingstree students would have “an amazing musical experience” by being on the SC State campus and playing with the Marching 101.

“I want them to fellowship to see what this family is like,” he said. “Music is universal, so to come from different backgrounds and different areas and be able to connect musically is an amazing thing.”

Kingstree senior trumpet player Erin Mouzon has a goal to join the Marching 101 full time when he enrolls at SC State next year.

Also planning to enroll at SC State next year is 18-year-old Zaria Graham, a senior at O-W. She recalled hearing the Marching 101 practice when she lived close to the SC State campus.

“It’s all about family. You want to support each other,” she said of her experience Saturday. “That’s what HBCU (Historically Black College or University) bands are all about – supporting each other.”

Graham said being in the O-W marching band had been hard but worth the effort.

As a member of O-W’s color guard, she might want to continue twirling in college, but she is sure that she wants to major in social work.

“I want to help people,” Graham said. “I want to be a therapist. I think I am good at listening and giving advice.”

With eyes on a career as an anesthesiologist, O-W senior clarinet player and drum major Lauren Wilkes, 17, was still exploring various options for college, including SC State. Playing with the Marching 101 on Saturday, though, she was embedded in tradition.

“It’s tradition to me because most of my family marched on the band here,” Wilkes said.