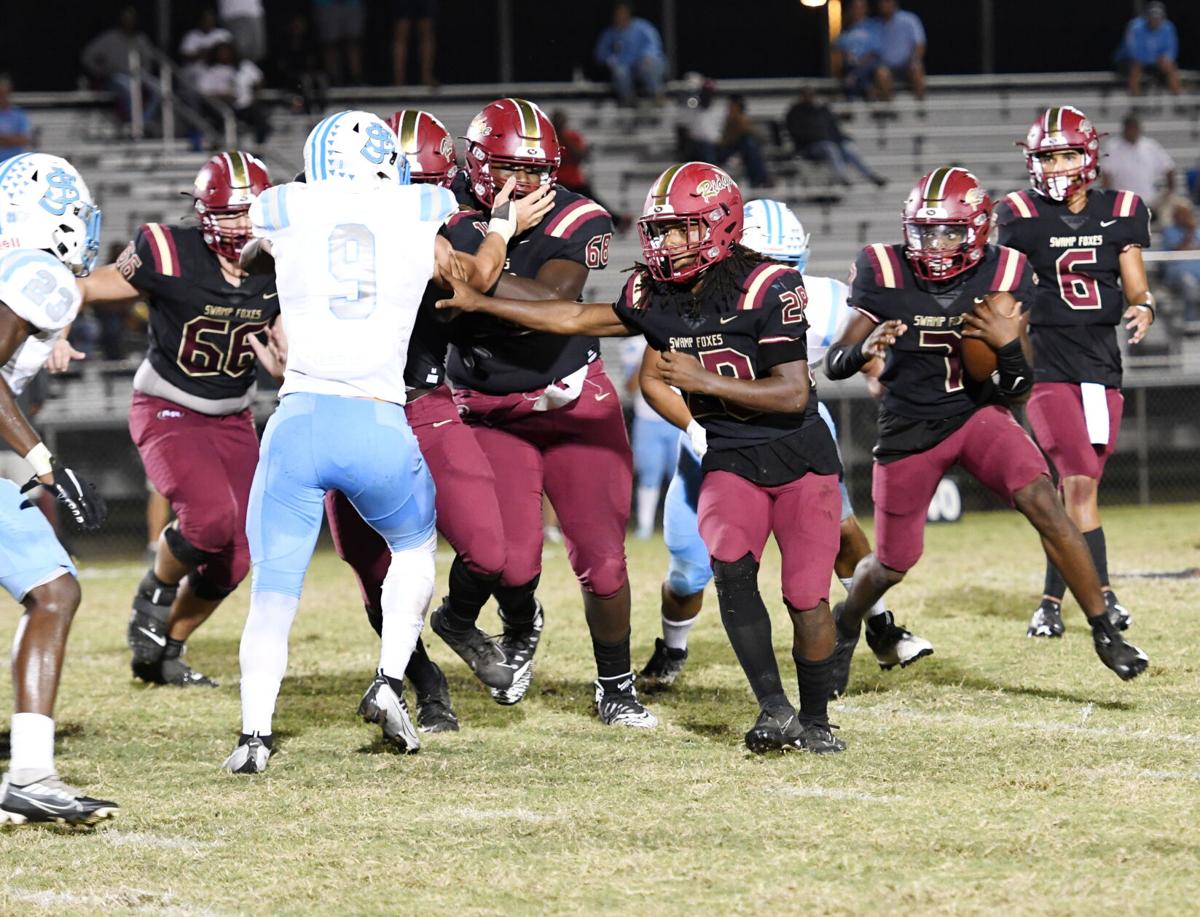 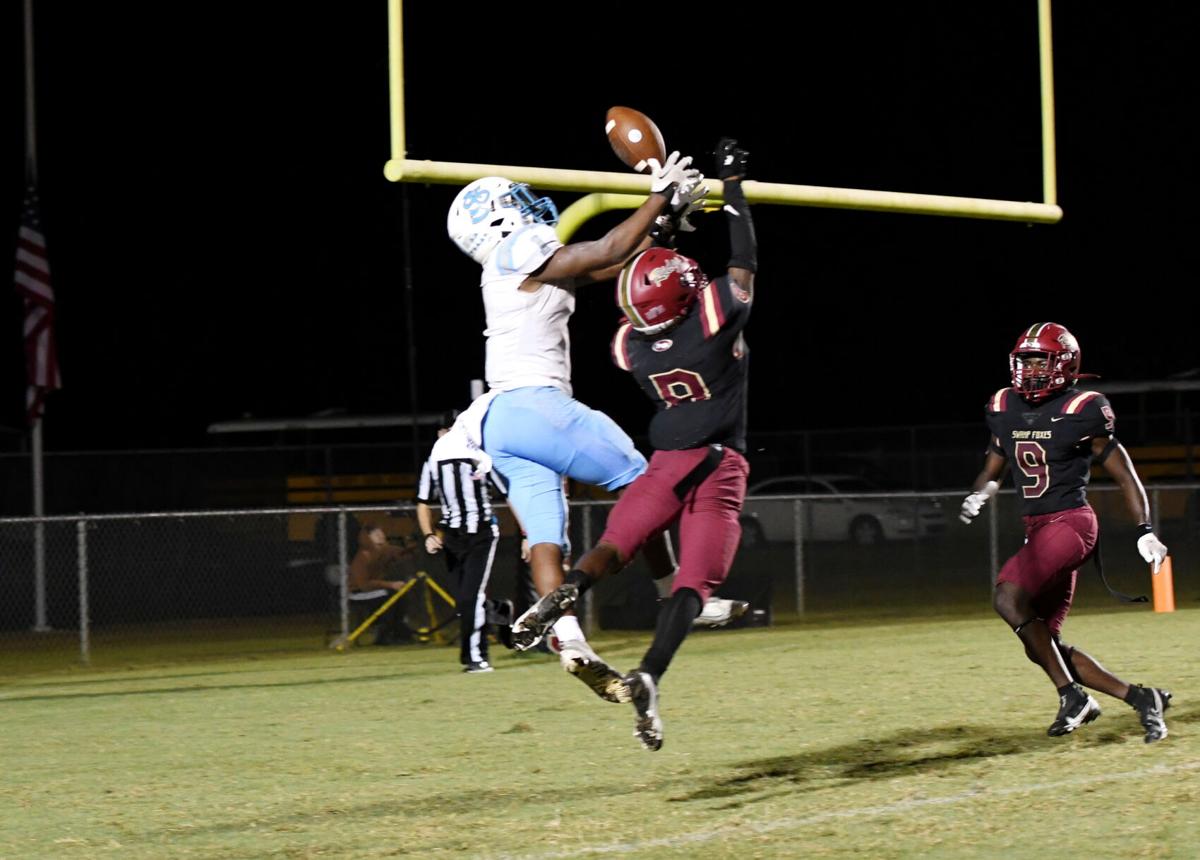 Chris Simmons' 43-yard touchdown run up the middle halfway through the final quarter put Ashley Ridge up for good but he added a 47-yard TD scamper for good measure.

“Chris has been a wide receiver in our program for three years and this is his senior year," Ashley Ridge coach Shane Fidler said. “Last week we were looking to find another running back because we were down a couple due to things like injuries and he said ‘I’ll do it.’ We put him back there and he has been lighting in a bottle. He had a 71-yard run last week against Colleton County.”

With the help of his supporting cast Sept. 16, Simmons led Ashley Ridge (3-1) to a 26-10 victory over visiting St. James, the third straight win for the Swamp Foxes.

“Jayden Acosta is grinding away and stealing yards,” Fidler said. “Those two did a good job running the ball and I need to give a shout out to the offensive line. We have a bunch of big, young kids who have really bought into the system and improved to put us in position to have success in the running game.”

Simmons rushed for 146 yards on 11 carries and had two receptions for 51 yards. Acosta rushed for 130 yards on 15 carries. Quarterback Xavier Proctor-Floyd completed six passes for 123 yards and rushed for 33 yards.

The game was a tale of two halves.

St. James drove 67 yards on its third possession to score on a two-yard touchdown run by receiver Jasaan Faulkner. With the extra-point kick from Daniel Deneen Jr. the Sharks took a 7-0 lead.

The Swamp Foxes answered with an 80-yard drive to score on a 10-yard TD run by Christian Garland with 10:28 remaining in the second quarter.

The Sharks began their ensuing drive on their own 15 and marched to the Swamp Foxes’ 15 and took a 10-7 lead off a 32-yard field goal by Deneen.

St. James made a defensive stop and then chewed up more than four minutes of clock before deciding to go for another field goal. Unfortunately for St. James, time ran out just before Deneen’s foot connected with the ball and sent it through the uprights so the kick produced no points.

That was just the break Ashley Ridge needed.

"Halftime adjustments paid off for us tonight," Fidler said. “All week we told our guys they are a very disciplined football team. We think we are faster and stronger but that won’t matter if they are more disciplined than we are. In the first half we kept shooting ourselves in the foot with a couple of penalties and a couple of stupid assignment things that put us behind the sticks and them in position to make plays.”

After regrouping, the Swamp Foxes scored quickly in the third quarter with a 43-yard TD pass from Proctor-Floyd to Matthew Phillips.

St. James shrugged that score off and on its second possession of the half mounted a promising drive at its own 12-yard line. The Sharks had a second-and-four on the Ashley Ridge 4, but Christian Garland’s sack and a pass breakup by corner back Jermaine Alexander on third down forced a 29-yard field goal attempt, which was blocked.

“We went in at halftime and the kids rallied together and said ‘we just need to be more disciplined and do the right things’,” Fidler said. “We made a couple of adjustments on offense that gave us better match ups so we could do the things they were giving us and that allowed us to run the ball really well in the second half and put the game away.”

Simmons gave the Swamp Foxes cushion with his first TD run with 7:19 remaining in the fourth quarter and iced the victory with his second scoring run with just under 4 minutes remaining.

Garland led the Swamp Foxes in tackles with 14 including a sack and six solo stops. Alex Ledford had 11 tackles including three unassisted and a sack. TJ Wilson and Brandon Ludlum both had nine tackles and one of Ludlum’s was a sack. Sebastian Sciannamea was also in on a sack.

Next up for the Swamp Foxes is a game at The Ridge against Wando (1-3) Sept. 23. The Warriors defense is only surrendering 11 points per game on average this season. Wando lost 30-0 to Summerville, but a single score was the difference in its losses to Lucy Beckham and West Ashley. The Warriors defeated Stall 34-0 Sept. 2.

“We need to do the exact same thing we did here tonight,” Fidler said. “We have to play disciplined football to beat those guys because they are going to be in the right spots. Coach (Rocco) Adrian, a defensive guy and former college coach, is going to have them ready to play. We have to clean up our mistakes so we don’t put ourselves in the position of having to make special plays in the fourth quarter.”