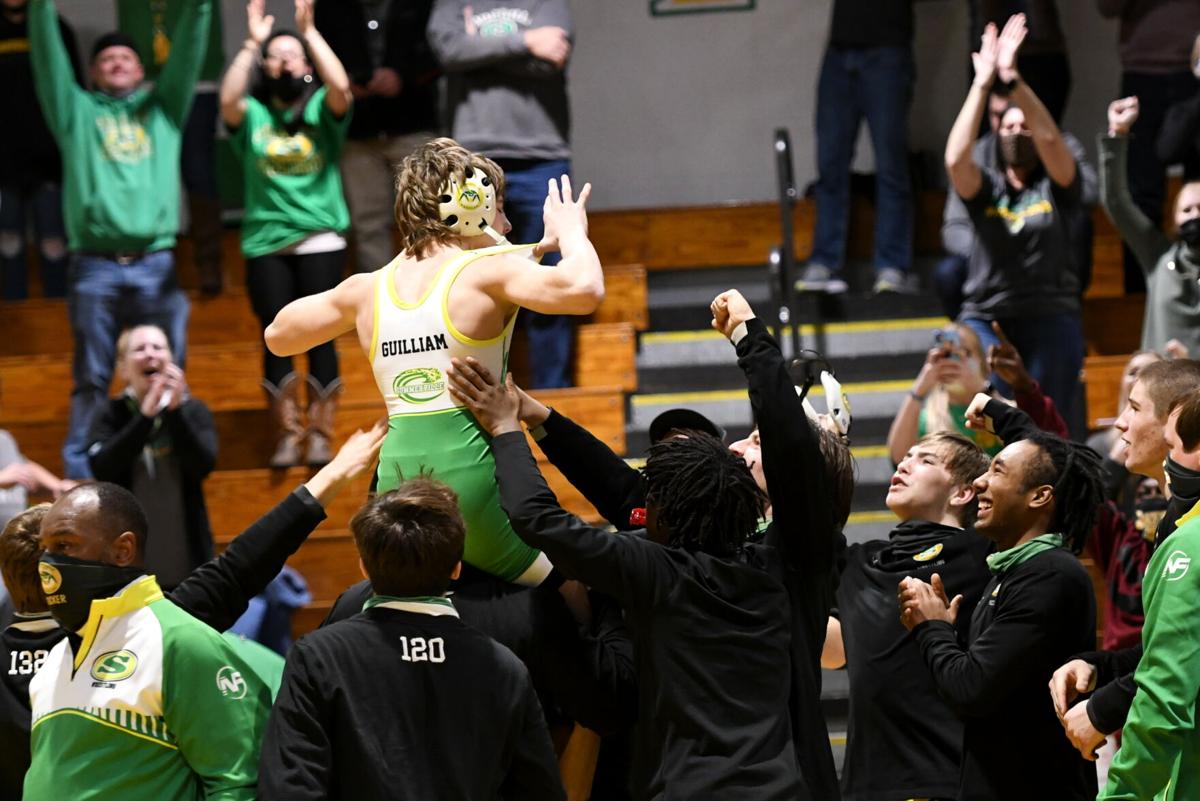 Green Wave wrestlers and fans cheer for Ben Guilliam after he won the 115-pound weight class to clinch a team victory for Summerville during the Class AAAAA Wrestling Lower State Championship match Feb. 17. 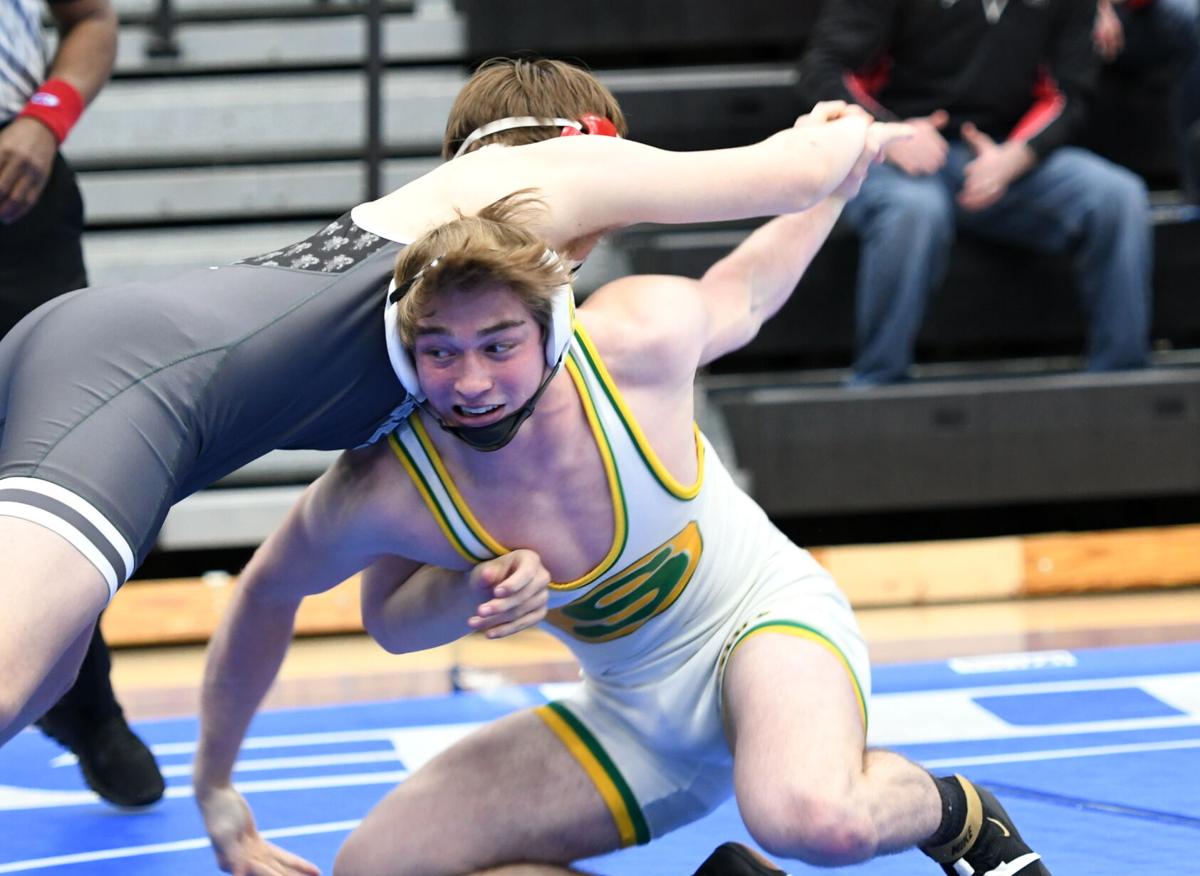 Summerville’s David Rundell makes a move on his Hillcrest opponent Feb. 20 during the 172-pound bout of the 5A Wrestling Championship. 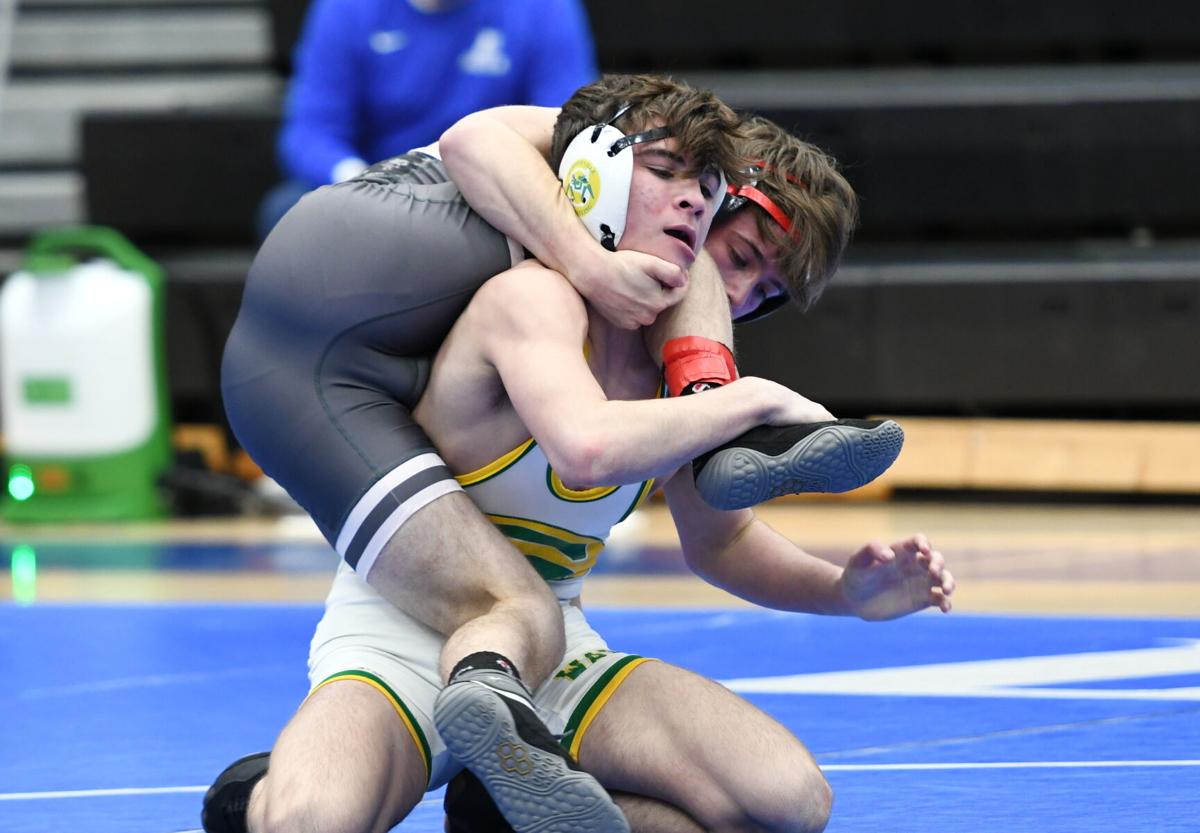 Summerville’s Gavin Butler claimed a 3-0 decision in the 122-pound weight class of the 5A Wrestling Championship Feb. 20.

Green Wave wrestlers and fans cheer for Ben Guilliam after he won the 115-pound weight class to clinch a team victory for Summerville during the Class AAAAA Wrestling Lower State Championship match Feb. 17.

Summerville’s David Rundell makes a move on his Hillcrest opponent Feb. 20 during the 172-pound bout of the 5A Wrestling Championship.

Summerville’s Gavin Butler claimed a 3-0 decision in the 122-pound weight class of the 5A Wrestling Championship Feb. 20.

A rally by Summerville Feb. 20 in the Class AAAAA Wrestling Championship match came up just shy.

The Green Wave advanced to the state wrestling finals for the first time since 2014 but fell 36-33 to Hillcrest, which is now the three-time defending 5A state champion.

“I won’t say the better team won tonight,” Summerville coach Darryl Tucker said. “I’d say the team that made the least amount of mistakes won, but with what we’ve faced this year I’m nothing but happy for my guys. A lot of these guys haven’t wrestled in this kind of atmosphere, with this much on the line. I hate it for our seniors, but we have a lot of young guys so I definitely see us getting back to this point in the near future.”

Summerville claimed decisions by David Rundell in the 172-pound weight class and Kyle Combs at 184, but trailed 30-6 after eight bouts.

“Hillcrest did what good teams do,” Tucker said. “They have a really good guy at 195 and their backup was able to step in and beat our guy there so they bumped their state champ up to 220 and won. That’s 12 points right there. Also losing a match at heavyweight after it was tied up with like 12 seconds left was big and my little guy at 106 was about to take their wrestler to his back and kind of mis-stepped.”

But Hillcrest’s Thomas Snipes pinned his Green Wave opponent at 140 to take the score to 36-27 and clinch the victory. Hillcrest forfeited the final match to Ryu Brown (147).

In addition to the normal obstacles, this year wrestling teams had to navigate all the changes brought on by COVID-19. Due to match cancelations and a suspension of all athletic activities by its school district, Summerville had more challenges to overcome than some.

“These guys have worked so hard through adversity,” Tucker said. “I mean we were shut down for 38 straight days and our guys didn’t pout, they didn’t complain. We got the green light and they came back and went back to work and you see what happened. We finally got over the hump and now these guys know what it takes to get here so we just have to figure out how to get across the next hump and win it all.”

Summerville claimed a 34-24 victory over River Bluff in the third round of the playoffs Feb. 17 to advance to the state finals. Xavirer Anderson gave Summerville the lead in that match and Guilliam sealed the victory for the Green Wave.

Anderson earned a 12-3 major decision at 108 to break a 24-all tie. Guilliam followed by pinning his Gators opponent in the final class of the evening to give the Green Wave some momentum entering the state title match.

“We knew we kind of had the upper hand in the lower weights so we just kind of needed to weather the storm up top,” Tucker said. “We kind of got lucky with some bumping around. We got that pin at 195 and the decision at heavyweight so all we needed were two wins to finish it up. Our little guys have been wrestling really well the last couple of weeks and our stud stepped up to finish it off for us.”

Even in some of the classes River Bluff won, Green Wave grapplers had a strong performance. Summerville had the lead at one point in three of the six classes it lost.

“At 160 we had a chance to win,” Tucker said. “Their guy is ranked No. 1 or 2 in the state and we lost a one-point match to him. Those kind of matches, hanging in with guys like that, gives momentum to your teammates. When you give that kind of effort, it makes everyone else step up and do the same thing. We feed off each other and have been doing that all year.”

The match only featured four wins by fall, two by each team. After taking a 14-4 lead into the third period of the opening match at 122, Summerville’s Hassan Williams was pinned by River Bluff’s Michael Rogers. River Bluff’s Quinton Boyle also won by fall at 172. In addition to Guilliam’s pin, Combs won by fall at 197.