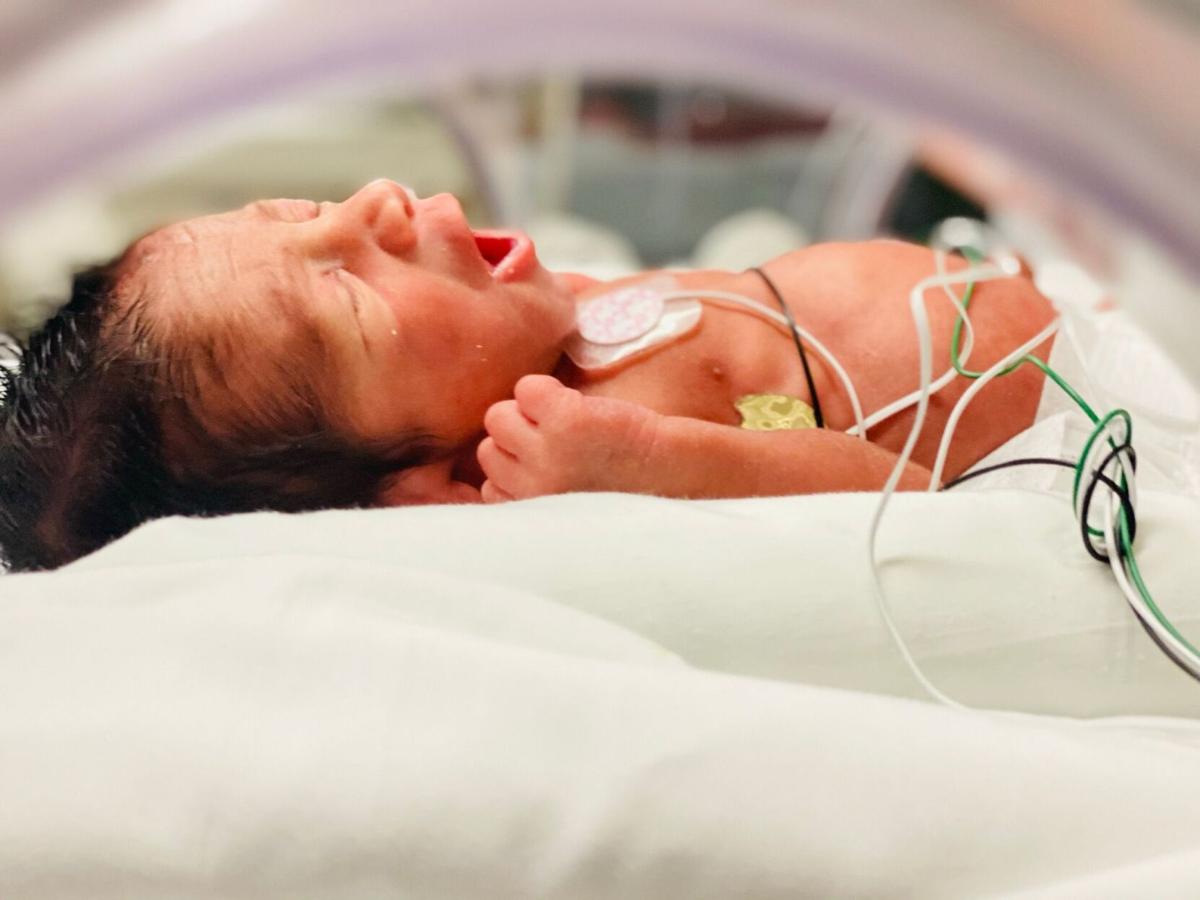 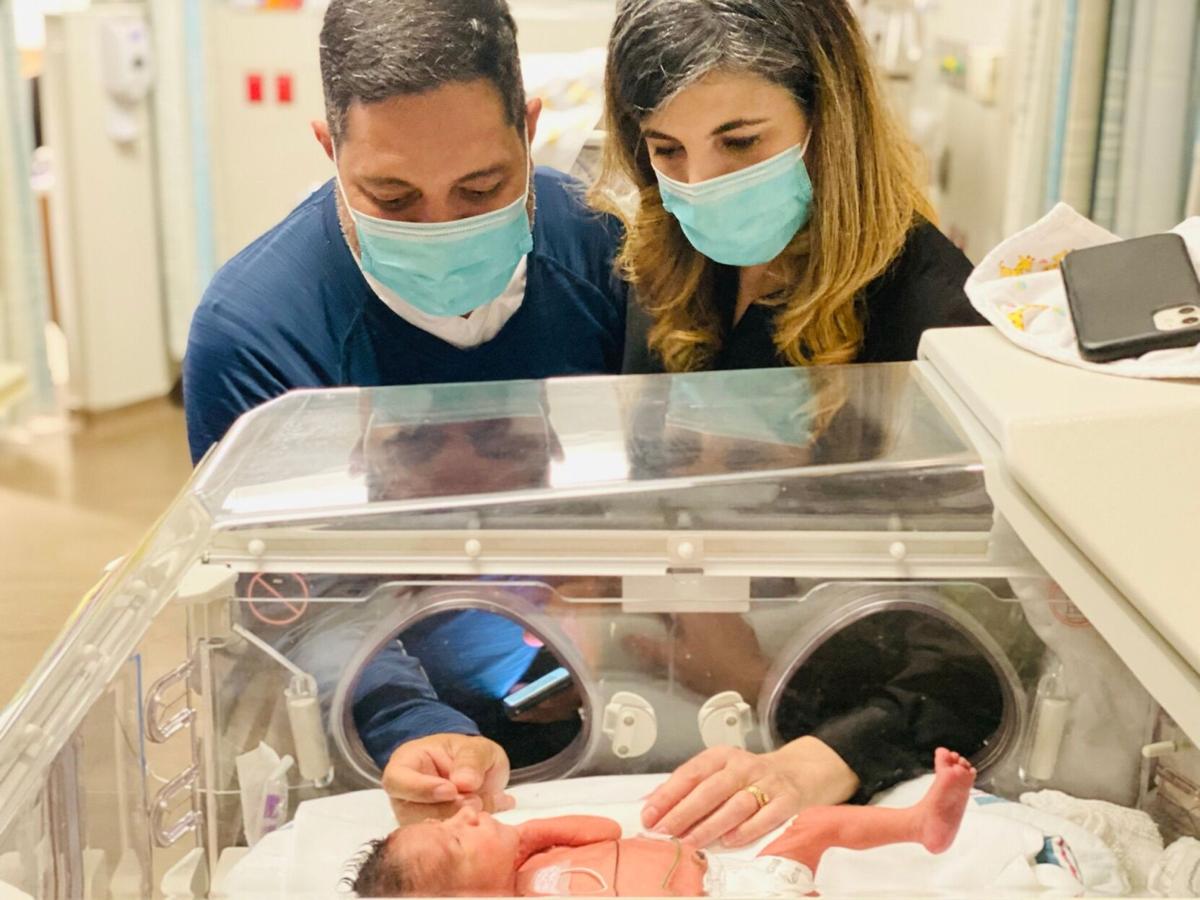 Rodrigo Assis and Alexsandra Luncinger visit one of their triplets, Michael, in the level two nursery at Summerville Medical Center. The triplets are expected to stay at the hospital for several weeks before going home. Provided 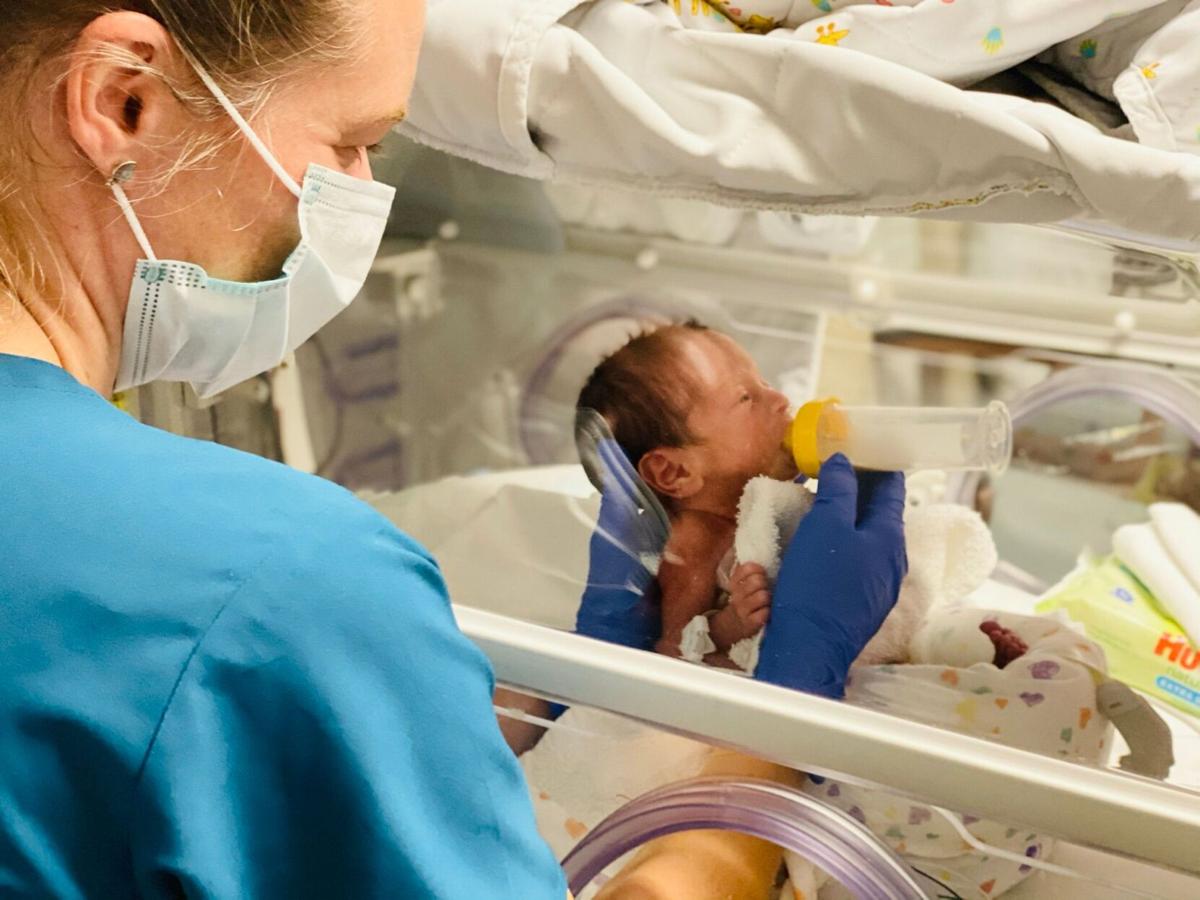 Baby Alice takes a bottle in the level two nursery at Summerville Medical Center. Alice is the only girl of the triplets. Provided 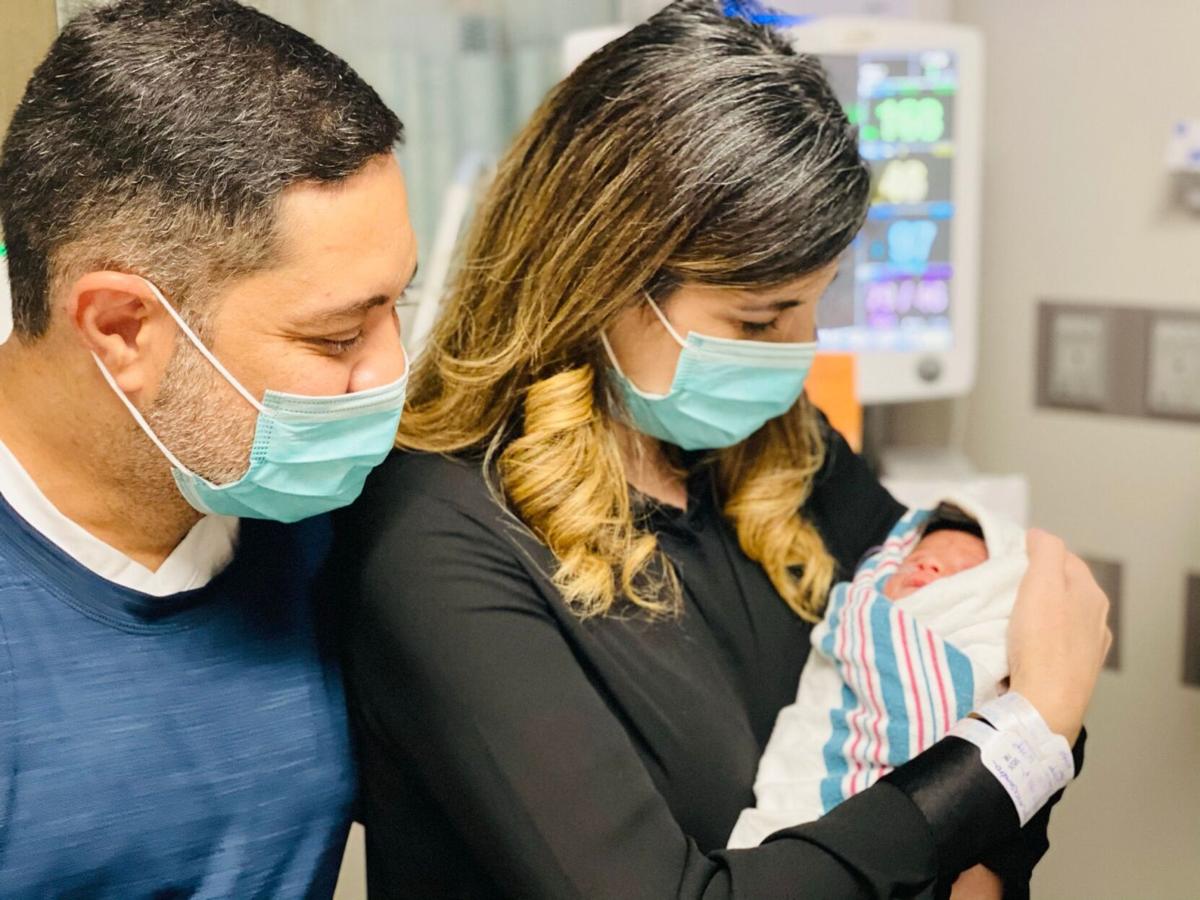 Rodrigo Assis and Alexsandra Luncinger hold baby Liam. All three triplets were born weighing at a little more then three pounds each. Provided

Rodrigo Assis and Alexsandra Luncinger visit one of their triplets, Michael, in the level two nursery at Summerville Medical Center. The triplets are expected to stay at the hospital for several weeks before going home. Provided

Baby Alice takes a bottle in the level two nursery at Summerville Medical Center. Alice is the only girl of the triplets. Provided

Rodrigo Assis and Alexsandra Luncinger hold baby Liam. All three triplets were born weighing at a little more then three pounds each. Provided

On May 4, the first set of triplets delivered at Summerville Medical Center in nearly 20 years became an answer to prayer. For Rodrigo Assis and Alexsandra Luncinger, who had dreamed of having children for years, the day was a miracle.

After several years of trying to have children with the odds against them, the married couple decided to try out In Vitro Fertilization. Doctors told the couple that Luncinger, who was 44 years old at the time that they first tried IVF, would likely only have one child at a time if any at all.

Two embryos were implanted. Later, after one of the couple's first ultrasounds, technicians discovered that one of the embryos had split, resulting in the pregnancy of triplets. Assis says that this was the result of a lot of prayers.

“We’ve prayed many years to get to this point and I'm a firm believer that the Lord intervenes in our favor. The odds were all against us for my wife to get pregnant,” Assis said. “We were told that if she got pregnant, it would be just one kid at a time, but God had a different plan,” Assis said.

Assis says that after they found out they would be having triplets, he couldn't feel his legs for nearly half an hour because of the shock.

“After we found out that we were having three instead of one or two, I couldn't feel my legs for about 20 minutes. It was a weird feeling. I didn't have any physical strength to get up and get out of my car. I mean I was shocked. But 24 hours later we wanted all three kids,” Assis said.

Spontaneous triplets are very rare, according to Dr. Richard Adams, who works in the maternal-fetal medicine clinic at Summerville Medical Center. The biggest contribution to triplets, Adams says, is using assisted reproductive technology or In Vitro Fertilization, as the Assis and Luncinger did. When having triplets, there are increased risks to the pregnancy in many ways.

“Basically, the human body is meant to carry one baby at a time. Twins are fairly common, but once you get beyond twins, I mean even twins are riskier than a normal pregnancy. But the risk of the pregnancy both to the infants and to the mom increases rather substantially,” said Adams.

Adams explained that the biggest risk is prematurity. A single pregnancy delivers generally around 38-40 weeks while the average gestation period for twins is about 35 weeks. For triplets, the average gestation period jumps to just under 32 weeks. There are other concerns when more than one baby is on board too, Adams says, including growth discrepancies or a high rate of pregnancy loss of one child.

“On the flip side, lots of things can go on with pregnancy complications with the mom, like early-onset preeclampsia, gestational diabetes, or hemorrhaging at the time of delivery. When you have more than one baby on board, especially three or more, these risks increase substantially,” Adams said.

Dr. Assaad Merchak, neonatologist at Summerville Medical Center who is currently part of the team taking care of the newborns, met with the family a month or so before the babies were born. This was part of a collaboration between the OBGYN services and maternal-fetal medicine services at the medical center, to prepare everyone for the upcoming delivery. During this time, Merchak showed the family the level two nursery, where all three babies are being cared for now.

Typically, Adams explained, most soon-to-be mothers of triplets are shipped directly to the Medical University of South Carolina because they will usually end up delivering before 32 weeks and may need extra special care. For Luncinger, who delivered just after 32 weeks, the Cesarean delivery went very smoothly.

For each premature infant, Adams says, there is a team of two to three individuals that work to stabilize and provide care for the infants immediately after birth.

“It's more of a coordination of the infant team, there are two to three individuals per infant. There are three people per team and you have three teams, then you've got nine people. So the room becomes very overcrowded, that's where the actual coordination comes into play,” Adams said.

In the delivery room on the day of the triplet's birth, there were nine people present to care for the babies alone. Also present was Assis, who says that getting to meet his babies for the first time was the best feeling he had ever experienced.

“I was a little numb and shocked at first. But once it sank in, it was the best feeling I've ever had. Nothing but joy and excitement,” Assis said.

Even healthy full-term babies lose weight during the first few days because when they are born, they have a lot of excess water that they have to get rid of. With premature babies, Merchak explained, the process is the same, but premature babies often lose even more weight because they have more excess water on board. On average, babies will gain half an ounce to an ounce a day, so to gain even a pound takes many days.

“It’s a normal transition phase for babies. But now they are starting to turn it around and put some weight back on,” Merchak said.

At first, the triplets were given a nutrition IV to supply their bodies with extra needed nutrition.

“Now they are using a combination of mom's milk and special premature formula to help them with their growth,” Merchak said.

Although they were born about eight weeks early, Merchak says that he does not expect them to stay until 40 weeks.

“They have done so well I don't expect them to stay until 40 weeks, because they are responding so well, we expect them to go home before that. But they still have to grow, learn how to eat, they are being fed from a tube from,” Merchak explained.

While the couple doesn't have an official date set for when they will get to take their triplets home, they say they are taking it day by day, but are looking forward to being able to eventually go home and begin their lives together.

“We just want to be able to bring them home healthy and we are hoping that they will come home between four to six weeks, if it takes seven or eight, as long as they come home 100 percent that's our main goal,” Assis said. “Once they get home, our prayer has always been that before they are successful businessmen or women, or whatever they choose to be in life, that they would be great men and that their heart would love the Lord. The prayer is that they would come into the world and really make a difference. To be great citizens and to be great parents one day. And make the difference in people's lives.”

So far, the couples entire pregnancy and delivery has gone so smoothly, that Assis says his doctor jokingly said he was wondering when something bad might happen. Despite the risks of being pregnant with triplets and being pregnant throughout COVID-19, the couple says they were never fearful because of their faith in the Lord.

"Honestly we didn't loose any sleep over it, we knew that this whole thing was a process that we had been hoping for and praying for for many years. We knew that the lord had it and that the outcome was going to be the best case scenario," Assis said. "We were in his hands and we didn't have a single moment that we feared. Yesterday we were actually just talking with the doctor and he said 'guys I'm going home sometimes just wondering whats going to happen, because everything is just too perfect. It is so good that I am concerned that something bad might happen,' and we were just like 'eh its not going to."

Merchak says that it has been a collaborative effort of the family, physicians, the OB-GYN team, and the level two nursery staff, who will continue to take care of the family for the next several weeks.

“It's not just one person or two people, it's literally a village,” Merchak said. “It's a lot of planning and care but we love it. We do it every day. I am very happy for the family. It's a dream for them to have babies and we are all excited about it.”