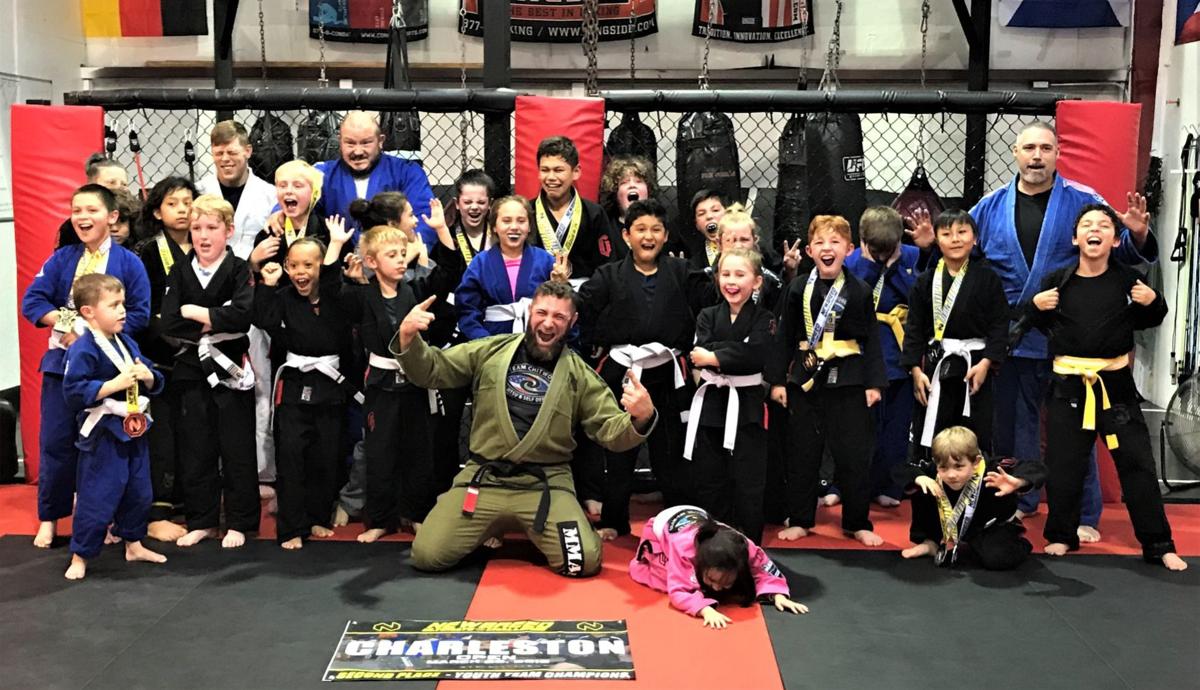 Decker (front, center) with a class of students at his business {span}Black Force Mixed Martial Arts & Fitness Academy{/span} in Summerville. 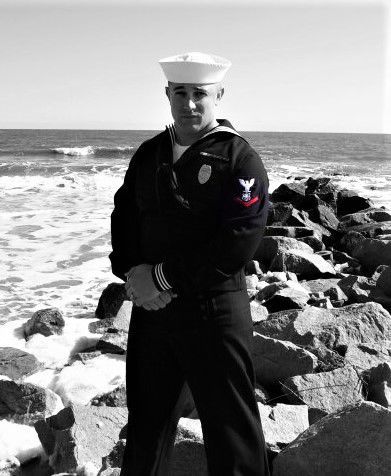 Decker during his time in the U.S. Navy 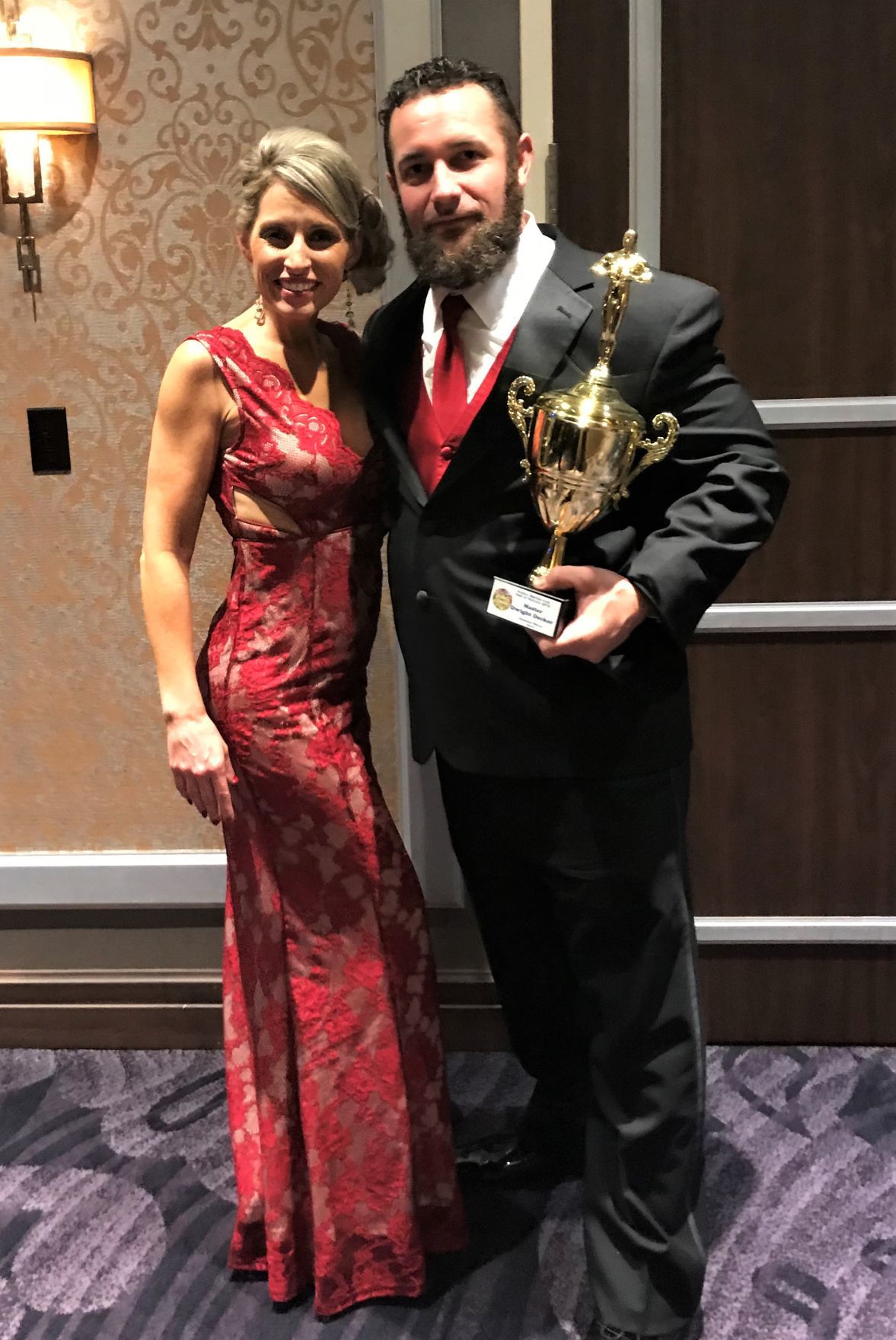 After facing a severe health decline seven years ago that required him to undergo multiple surgeries—and more still to come—Dwight Decker was forced to re-think his life.

For years, he had indulged in “pushing the envelope,” running up to 12 miles a day, lifting weights and pursuing anything and everything that offered an adrenaline rush.

“I just love it; that is my drug,” Decker said. “I just feel everybody goes through life just existing; it’s not until you get outside that comfort zone that you actually start living.”

But between 2010 and 2011, everything familiar to Decker came crashing down after doctors told him he had the bones of an 80-year-old man. The culprit? The drug Nexium.

Decker said the Navy had prescribed the medication to him years earlier for heartburn. At the time, Nexium was still fresh on the market and not every side effect known.

“I went from high speed to low drag,” Decker said.

His health woes specifically surfaced while he was competing in a local bench press competition for the Navy. The competition had occurred at Decker’s own martial arts academy—Black Force Mixed Martial Arts and Fitness Academy—which he started in Summerville in 2010.

After seeking medical attention, Decker received shoulder surgery. It was then that doctors learned the harsh reality about his brittle bones. At just 31, Decker found himself a new father, with a baby girl at home, and re-learning how to walk. For months he used a walker then a cane as he recovered from multiple surgeries for hip, pelvic and spinal fractures.

The hardship was an unforeseen life storm, and while Decker hired two attorneys to help him stay in the military, he eventually medically retired in 2011. Despite the setback, he persevered through the pain to start a new, stronger life chapter—proving his fierce determination by returning to his beloved role as a martial arts instructor just two weeks after hip surgery.

“I was teaching from a walker,” Decker said.

His rationale was simple: he knew he still had a purpose in life—only that purpose had slightly changed.

“I’m here on this earth for a reason, and now this reason is stripped from me,” Decker said. “I got to find a new reason.”

‘I wanted to do something more’

Decker served a total of five years, 10 months and 30 days in the Navy. It was a career change he chose at an age older than most recruits—entering boot camp at 29. Decker explained he was previously in law enforcement, conducting undercover narcotics work and participating on the SWAT team for his hometown police department in Tiffin, Ohio.

But thoughts about the military had rustled in his mind for years—always feeling the urge to follow in the footsteps of relatives who had served in the Army and Marines. He also dreamed of becoming an Army Ranger like a good friend he said lost his life overseas.

After high school, he attended Tiffin University on a football scholarship and secured his undergraduate degree; but while working as a police officer, he felt called to return to school. Not long after, Decker obtained a master’s in forensic psychology. It was also during that time he said a Navy recruiter friend questioned his military interest, knowing Decker had earlier in his life talked to recruiters.

The year was 2006, and Decker found himself in boot camp training alongside younger Naval recruits. Because he had already completed police academy and understood the physical and mental challenges associated with such training, Decker said he opted to use his seasoned skills to motivate struggling recruits—”kids just finding their rhythm in life.”

“I was the first one done with PT so I would go back and be with the skragglers,” Decker said. “I wasn’t going to let my team fail.”

Later that year, Decker was assigned to the Lowcountry, hand-selected to fill an E-6 billet position at the Naval Weapons Station in Goose Creek. The role had him conducting anti-terrorism force protection—many of his duties top secret in nature.

While Decker is no longer in the Navy, he hasn’t stopped serving his country. Instead, he now fulfills his patriotic duty by looking out for other veterans—those who can’t secure proper care from Veterans Affairs.

“It’s so frustrating to hear the stories from the VA,” Decker said.

His heart for former service members is also the reason why in addition to his Summerville-based gym, he started his nonprofit, Grappling PTSD. Decker said it’s “his way of taking care of the people who take care of us.”

The nonprofit raises funds for local charities, helps hook veterans up with wheelchairs and other needed medical equipment and even covers the cost of their dental and doctor visits.

“Even though we get out, the demons still are with us,” Decker said. “(Veterans are) our responsibility.”

His organization also annually hosts a Walk for the Fallen event. Starting in the middle of the night, participants walk from Summerville to Mt Pleasant. This year the event is scheduled for July 20.

Though Decker’s now unable to run or do squat exercises because of the potential to dislocate a hip, he continues to find fulfillment and therapy in his martial arts.

“It’s a never-ending hunger that never gets fed,” he said. “That’s just what the martial arts are to me—it’s something that if I don’t do it for a while, it’s like something’s missing. …A lot of stuff I can’t do anymore so I do a lot of the other stuff to make up for it.”

Earlier this year Decker was inducted into the Martial Arts Hall of Fame. Talking about the honor, he choked back tears as he glanced at a photo, hanging on a wall inside his business, of his martial arts mentor, Steve Hindman, who’s since passed away.

“Just (his) words of wisdom–unbelievable; that guy is amazing,” Decker said.

Now, as an instructor, Decker views his role as a vital example for youth—some of whom might be dealing with rough home lives.

“I feel like there’s still those people out there who still need that second, third, fourth and fifth chance at life,” he said. “I think kids now need a little direction to put down the controller and get up off the couch to go do something that is needed.”

After all, Decker also experienced a rough childhood and said it was through sports that he and his two siblings were able to best vent. His love for martial arts started in seventh grade when he was part of his school’s wrestling team. At the time, his coach took him under his wing.

“Martial arts saved my life; it took me from a bad spot,” Decker said.

He also named Shawn Chitwood and Kevin Cullen as his top mentors—and his wife Alicia as his No. 1 supporter.

“You have to have these people in your life…to guide you,” Decker said.

In college, connections with martial arts experts and instructors took Decker much farther in the field than he ever expected—traveling the world for competitions. Various medals, trophies and plaques now line his academy’s walls.

“I never thought when I first started (martial arts) that the journey would take me that far,” he said.

The Deckers reside in Summerville and have two children—a son, 9, and daughter, 4, and they’re already learning how to defend themselves. He said his youngest even has her own pink gi, the traditional martial arts uniform.

For more information on Walk for the Fallen 2019 and Grappling PTSD, visit their Facebook pages.

“I feel like there’s still those people out there who still need that second, third, fourth and fifth chance at life.”

The year was 1942, and Lenny Singer—just a teen—sensed the draft was coming for him. The wor…

Larry Kinard always knew the military would be his future and couldn’t join soon enough. In …

Eugene Merlo always knew he would one day serve his country, especially after his older brot…

When Diane Thomas entered the United States Navy right out of high school, she was in search…

“I feel like there’s still those people out there who still need that second, third, fourth and fifth chance at life."