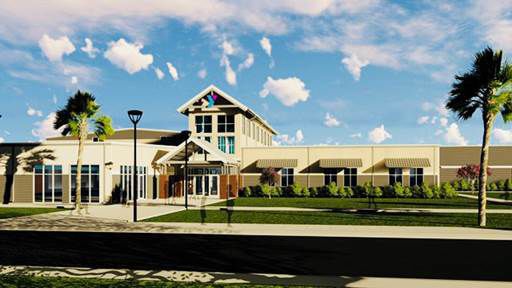 A rendering of the facility 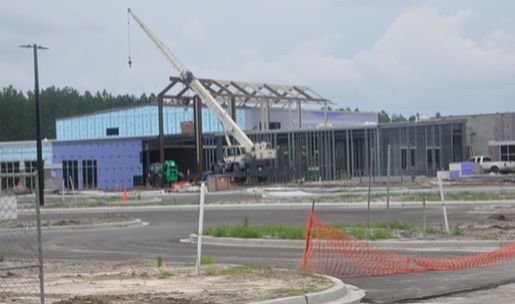 The state-of-the-art YMCA under construction on Cane Bay Boulevard.

A rendering of the facility

The state-of-the-art YMCA under construction on Cane Bay Boulevard.

Construction cranes and work crews continue their work at the future site of the Lowcountry’s largest YMCA facility as organization officials anticipate doors opening in a matter of weeks.

While no set date for opening the Cane Bay YMCA has been determined, officials said they’re confident the 54,000-square-foot site will welcome community members by the end of September or early October—the weather a deciding factor for the timeline, according to Kimberly Nolte, executive director of Berkeley County Family YMCA.

Multiple aspects of the local project have been celebrated as historic and innovative for the YMCA brand. Not only is the facility to be the largest in the region but the 68-acre property is the largest non-camp land gift in YMCA history, Nolte said. Cane Bay Plantation donated the land.

Upon opening, half the acreage will remain undeveloped; and according to the organization’s leaders, the extra room to grow is a bonus feature.

“With an extra 34 acres still left to build upon, we are only stopped by our imaginations,” Nolte said.

The site is located on Cane Bay Boulevard, within the Cane Bay Plantation subdivision, an area undergoing rapid development inside the state’s fast-growing county—Berkeley. With homes, schools, trails, dining and shopping in place, it made sense for a YMCA also join the mix and offer added recreational opportunities for residents and visitors alike.

Grambling Brothers Development Corporation “has very definite ideas of how they want Cane Bay to flourish” through the facility’s help, according to Nolte.

“A YMCA that can serve a large population that is growing was part of that vision,” she said.

At a $20 million price tag, construction commenced on the property in June 2017.

The facility will offer a 25-meter pool for members and non-members to enjoy. Non-members need only to purchase a member day-pass to sunbathe and splash at the site. The pool is only the second one in the county open to the public.

Programs are also to include a range of indoor and outdoor activities for youth and adults—imagine new outdoor trails connecting to current ones throughout the community and a walk/run track inside the facility.

The interior gym will be a place for a variety of sports—basketball, volleyball, pickleball, among others. With the inclusion of stage space, the gym can also be a center for local theater groups and churches to rent and host performances, dances and other events, Nolte said.

The property’s other amenities include tennis courts, baseball and softball fields and health/wellness programs, as well as innovative exercise equipment— “the latest that is being offered by Live fitness,” the YMCA’s equipment provider, Nolte said. That includes individual TVs for each elliptical, treadmill, stair mill, reclining bike and more.

But that’s not all. Nolte also described individual workout rooms—one each for TRX extreme sport training and spin class, with “state-of-the-art” bikes considered the best in the spin world. The facility additionally offers three aerobic rooms that can be converted into one large room if needed.

Perhaps most unique to the project is the first-ever partnership between a YMCA and library, according to Nolte. Officials with the organization and Berkeley County Public Library system worked harmoniously on the indoor library’s design to offer a “full-service” place to read, learn, study and relax, Nolte said. The county library will maintain a 20-year lease with the YMCA and bring the bookmobile to the site.

“We picked out colors, carpet, etc...together,” Nolte said. “There are other libraries in other Y’s but this is (the) first time a library has been built in conjunction with a Y.”

}Since May 10 the YMCA of Greater Charleston has been fundraising for its newest site by kicking off its capital campaign. The Cane Bay Family YMCA has raised nearly $2 million toward its $5 million goal, according to a YMCA press release.

“This generous donation is very significant,” said Paul Stoney, president and CEO of the YMCA of Greater Charleston and Cane Bay Family YMCA, in the release.

Hunter is not only part of the YMCA’s fundraising committee but also owns C&A Unlimited Inc., which operates McDonald’s franchises in Ladson, Moncks Corner and Summerville.

“Ms. Hunter has been a pillar of the community and has always given back,” Stoney said.

In the release, Hunter praised the YMCA programs and expressed her gratitude for swim lessons in particular, believing that children’s participation in the swim program will greatly reduce their odds of drowning.

“Having the opportunity to learn to swim will reduce this horrible statistic and provide our children with a lifetime of water sport enjoyment and the chance to participate in more aquatic competitive events,” she said.

National stats for drowning deaths among ages 14 and under, especially African-Americans, is one in five annually, according to Hunter.

The statistics on drowning are quite daunting,” Stoney said in the release.

The Cane Bay Family YMCA will also honor Hunter’s contribution and heart for children by naming the second-grade swim program after her.

For more information on the capital campaign or to donate, visit ymcagc.org/donation/.