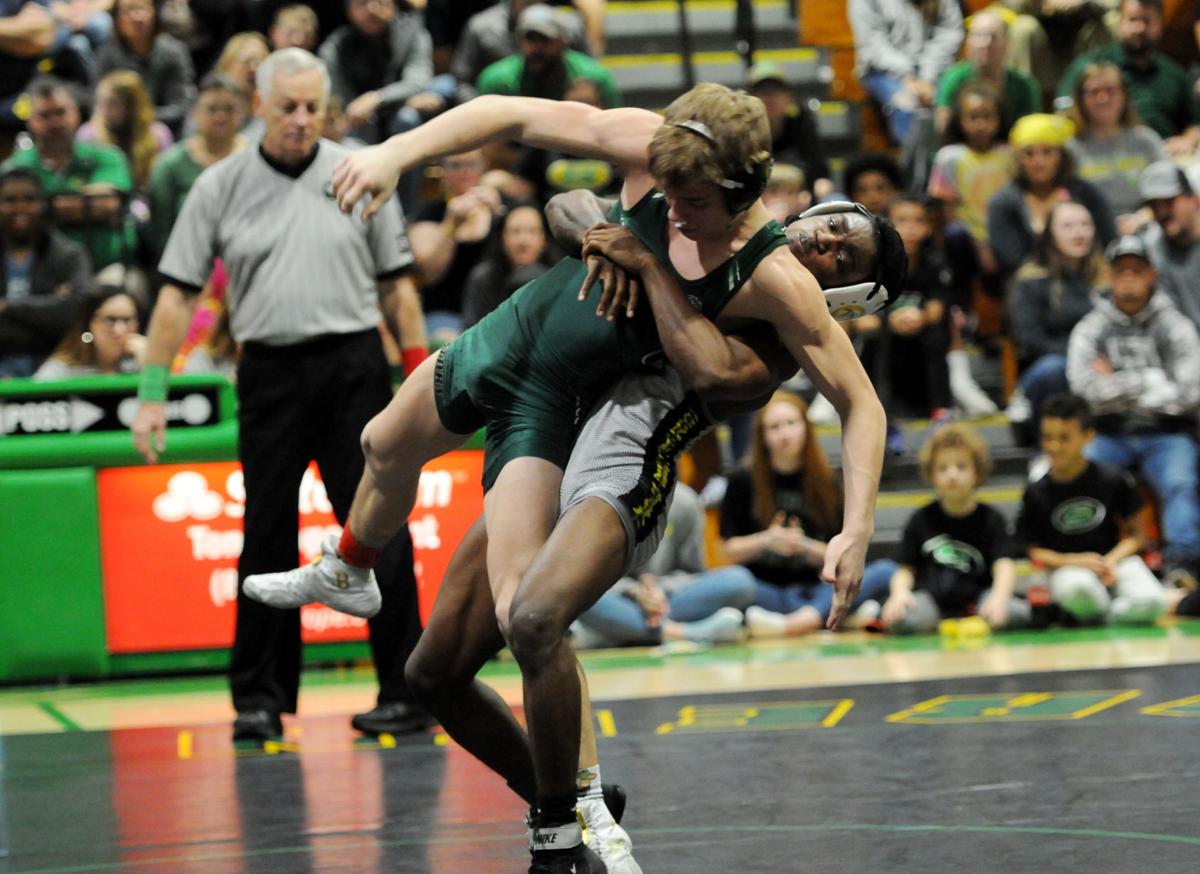 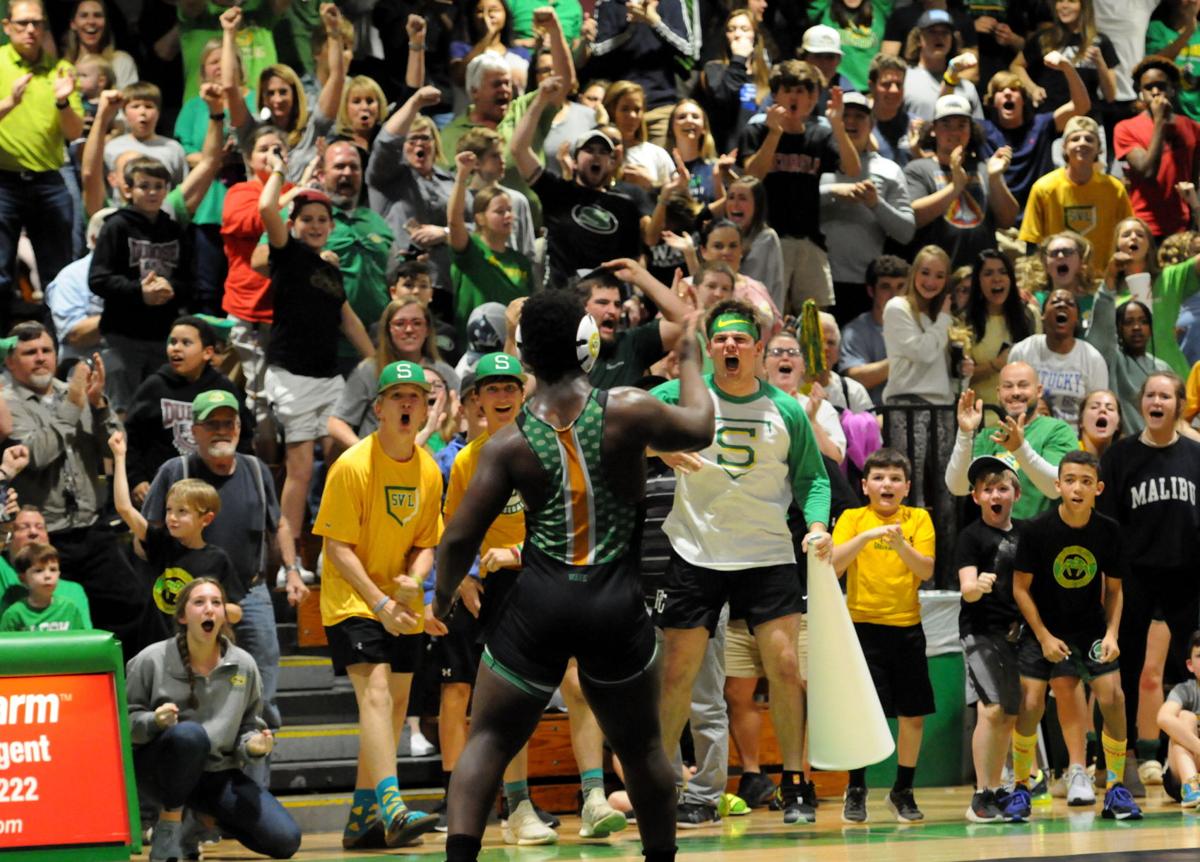 Summerville fans cheer for Rubin Izzard after he won the 220-pound match of the Class AAAAA Wrestling Lower State Championship. 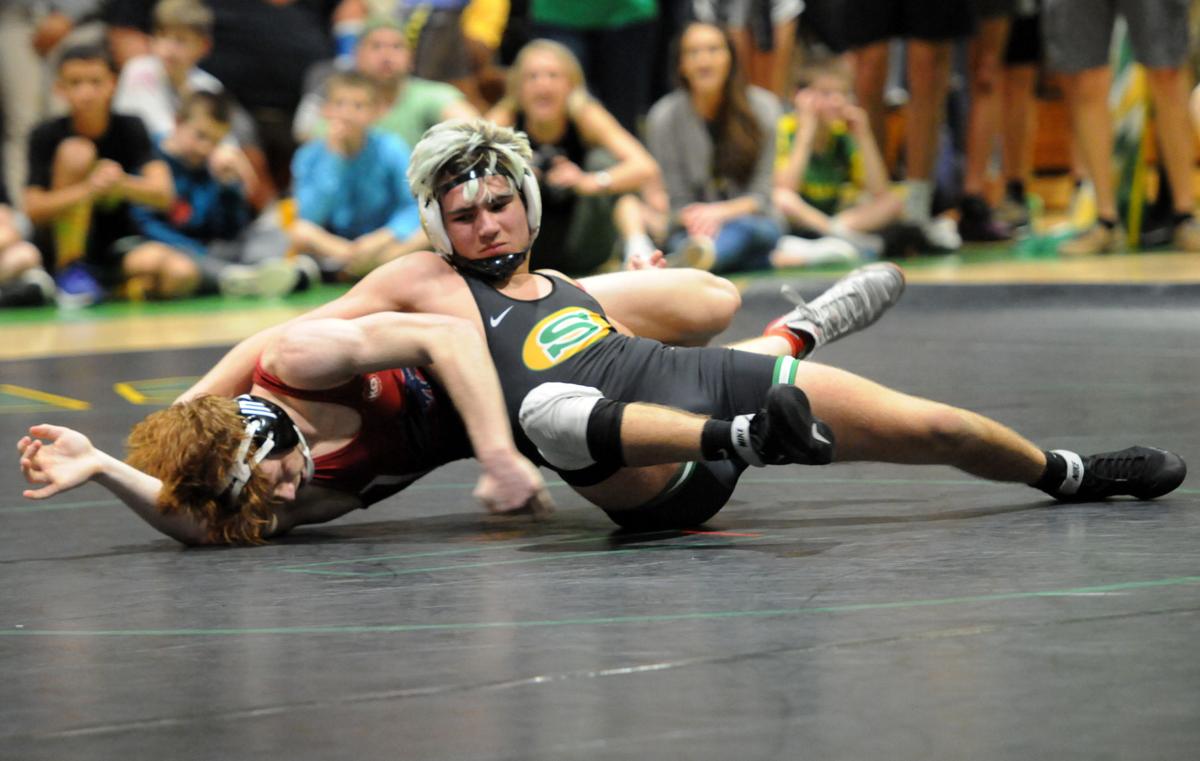 Summerville’s Aidan Jurey attempts to put his White Knoll opponent on his back Feb. 12.

Summerville fans cheer for Rubin Izzard after he won the 220-pound match of the Class AAAAA Wrestling Lower State Championship.

Summerville’s Aidan Jurey attempts to put his White Knoll opponent on his back Feb. 12.

The Green Wave Wrestling team was edged out by White Knoll Feb. 12 during the Class AAAAA Wrestling Lower State Championship.

Summerville (31-3) took a 10-point lead with only four weight classes remaining to be contested, but could only manage to win one of those classes as it fell 28-27 in The Firehouse. White Knoll (26-10) advanced to the 5A state championship match Feb. 15, where it lost to defending state champion Hillcrest (36-5).

“We had a good year,” Summerville coach Darryl Tucker said. “Am I disappointed that we lost, yes, but hats off to White Knoll. They wrestled good enough to win and we just didn’t get the bonus points we needed.”

Summerville defeated White Knoll 39-32 earlier this season. In that match, Summerville won five classes by pin and another by forfeit.

The Green Wave was alive until the very end. Trailing by five points, Summerville sent Rundell to the mat for the final weight class. He battled in an effort to get the pin that would send Summerville to the state title match but, despite some close calls, White Knoll 160-pounder Preston Wages managed to stay off his back and secure the victory for the Timberwolves.

“He’s putting a lot of pressure on himself because he didn’t get the pin, but it doesn’t come down to one guy,” Tucker said. “We have 13 other guys in the lineup that could have done something a little different. He’s going to take it hard because he is a captain, but that doesn’t fall on his shoulders.”

Summerville now shifts its focus to the Lower State individuals tournament Feb. 21-22. Tucker is optimistic about the tournament and beyond.

“This is a great group of guys and I have a great coaching staff,” he said. “I love these coaches like we’re brothers and we put a lot of time into this. We didn’t achieve our ultimate goal, but this team might be a little ahead of schedule. We are very young so we will learn from this.”

Summerville advanced to the semi-finals with a 32-30 win over River Bluff, the team that eliminated the Green Wave from the wrestling playoffs last season. The Gators took a 21-4 lead in the third-round match Feb. 10, but Summerville won seven of the last nine weight classes to advance.

The Gators led 30-28 going into the final weight class of the evening, the 138-pound class. Knowing what was on the line, Jurey left nothing to chance and claimed a 13-0 major decision to put the Green Wave on top for good.

“Earlier in the match I was telling my teammates to just go out there and do their best and hopefully we wouldn’t have to worry about my match, but this was great,” Jurey said. “I knew I had to win so that was all I had in mind. Once I was out there I just went hard.”