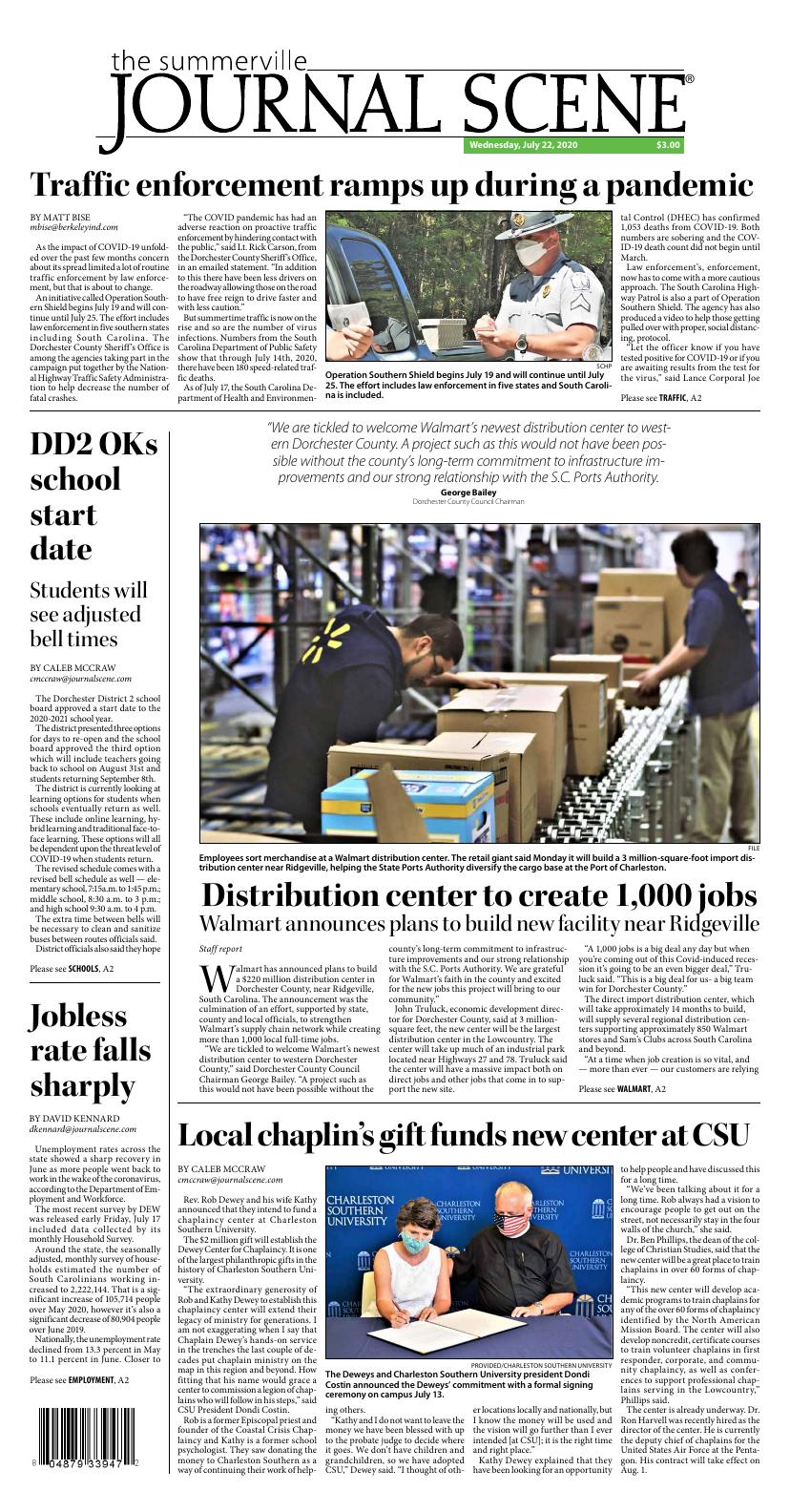 News
Traffic enforcement ramps up during a pandemic
SCHP

Operation Southern Shield begins July 19 and will continue until July 25. The effort includes law enforcement in five states and South Carolina is included.

As the impact of COVID-19 unfolded over the past few months concern about its spread limited a lot of routine traffic enforcement by law enforcement, but that is about to change.

An initiative called Operation Southern Shield begins July 19 and will continue until July 25. The effort includes law enforcement in five southern states including South Carolina. The Dorchester County Sheriff’s Office is among the agencies taking part in the campaign put together by the National Highway Traffic Safety Administration to help decrease the number of fatal crashes.

“The COVID pandemic has had an adverse reaction on proactive traffic enforcement by hindering contact with the public,” said Lt. Rick Carson, from the Dorchester County Sheriff’s Office, in an emailed statement. “In addition to this there have been less drivers on the roadway allowing those on the road to have free reign to drive faster and with less caution.”

But summertime traffic is now on the rise and so are the number of virus infections. Numbers from the South Carolina Department of Public Safety show that through July 14th, 2020, there have been 180 speed-related traffic deaths.

As of July 17, the South Carolina Department of Health and Environmental Control (DHEC) has confirmed 1,053 deaths from COVID-19. Both numbers are sobering and the COVID-19 death count did not begin until March.

Law enforcement’s, enforcement, now has to come with a more cautious approach. The South Carolina Highway Patrol is also a part of Operation Southern Shield. The agency has also produced a video to help those getting pulled over with proper, social distancing, protocol.

“Let the officer know if you have tested positive for COVID-19 or if you are awaiting results from the test for the virus,” said Lance Corporal Joe Hovis, in the video from the Highway Patrol.

Other recommendations include not getting out of your vehicle unless told to do so, holding your documents out the window so the officer can read them without touching the items.

“Now more than ever before our law enforcement officers are encouraged to maintain as much distance as possible between themselves and the public while conducting business,” said State Trooper First Class Lena Butler. “As the trooper gathers information from you be aware they may speak louder than usual as they look to maintain proper social distance.”

A more sensible piece of advice from troopers is to obey all traffic laws so there will be no need for social distancing in the first place.

Walmart has announced plans to build a $220 million distribution center in Dorchester County, near Ridgeville, South Carolina. The announcement was the culmination of an effort, supported by state, county and local officials, to strengthen Walmart’s supply chain network while creating more than 1,000 local full-time jobs.

“We are tickled to welcome Walmart’s newest distribution center to western Dorchester County,” said Dorchester County Council Chairman George Bailey. “A project such as this would not have been possible without the county’s long-term commitment to infrastructure improvements and our strong relationship with the S.C. Ports Authority. We are grateful for Walmart’s faith in the county and excited for the new jobs this project will bring to our community.”

John Truluck, economic development director for Dorchester County, said at 3 million-square feet, the new center will be the largest distribution center in the Lowcountry. The center will take up much of an industrial park located near Highways 27 and 78. Truluck said the center will have a massive impact both on direct jobs and other jobs that come in to support the new site.

“A 1,000 jobs is a big deal any day but when you’re coming out of this Covid-induced recession it’s going to be an even bigger deal,” Truluck said. “This is a big deal for us- a big team win for Dorchester County.”

“At a time when job creation is so vital, and — more than ever — our customers are relying on Walmart for the essentials they need during this unprecedented time, we are excited about the impact this new facility will have on the regional economy and how it will help us better serve customers across the Southeast,” said Greg Smith, Executive Vice President of Supply Chain for Walmart. “We found a great partner in the state of South Carolina and we’re grateful for the support we received from Dorchester County, the South Carolina Ports Authority, the Department of Commerce and so many others who helped make this project a reality.”

“Walmart has proven to be an exemplary partner that is committed to South Carolina and our citizens,” said South Carolina Governor Henry McMaster. “We couldn’t be prouder that such an important and successful company has decided to invest in our people and create even more jobs for hardworking South Carolinians. We look forward to continuing this fruitful partnership and seeing all that it will mean to both Walmart and our state in the future.”

Charleston Southern University students walk through campus in Octber. The school has since cancelled classes and sent students home.

Rev. Rob Dewey and his wife Kathy announced that they intend to fund a chaplaincy center at Charleston Southern University.

The $2 million gift will establish the Dewey Center for Chaplaincy. It is one of the largest philanthropic gifts in the history of Charleston Southern University.

“The extraordinary generosity of Rob and Kathy Dewey to establish this chaplaincy center will extend their legacy of ministry for generations. I am not exaggerating when I say that Chaplain Dewey’s hands-on service in the trenches the last couple of decades put chaplain ministry on the map in this region and beyond. How fitting that his name would grace a center to commission a legion of chaplains who will follow in his steps,” said CSU President Dondi Costin.

Rob is a former Episcopal priest and founder of the Coastal Crisis Chaplaincy and Kathy is a former school psychologist. They saw donating the money to Charleston Southern as a way of continuing their work of helping others.

“Kathy and I do not want to leave the money we have been blessed with up to the probate judge to decide where it goes. We don’t have children and grandchildren, so we have adopted CSU,” Dewey said. “I thought of other locations locally and nationally, but I know the money will be used and the vision will go further than I ever intended [at CSU]; it is the right time and right place.”

Kathy Dewey explained that they have been looking for an opportunity to help people and have discussed this for a long time.

“We’ve been talking about it for a long time. Rob always had a vision to encourage people to get out on the street, not necessarily stay in the four walls of the church,” she said.

Dr. Ben Phillips, the dean of the college of Christian Studies, said that the new center will be a great place to train chaplains in over 60 forms of chaplaincy.

“This new center will develop academic programs to train chaplains for any of the over 60 forms of chaplaincy identified by the North American Mission Board. The center will also develop noncredit, certificate courses to train volunteer chaplains in first responder, corporate, and community chaplaincy, as well as conferences to support professional chaplains serving in the Lowcountry,” Phillips said.

The center is already underway. Dr. Ron Harvell was recently hired as the director of the center. He is currently the deputy chief of chaplains for the United States Air Force at the Pentagon. His contract will take effect on Aug. 1. 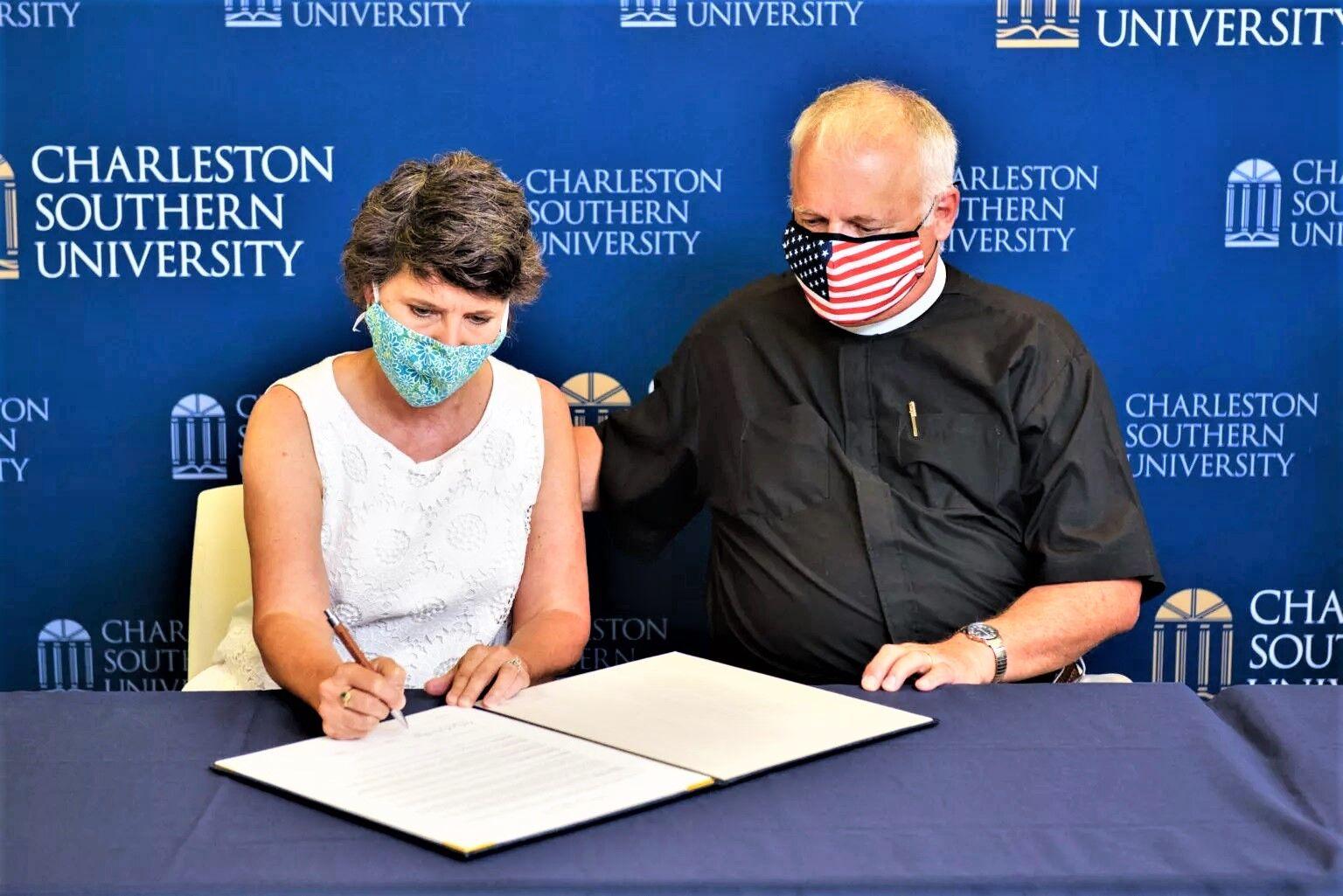 The Rev. Rob Dewey and his wife, Kathy made a multi-million dollar gift to CSU. It is one of the largest philanthropic commitments in the history of Charleston Southern University. 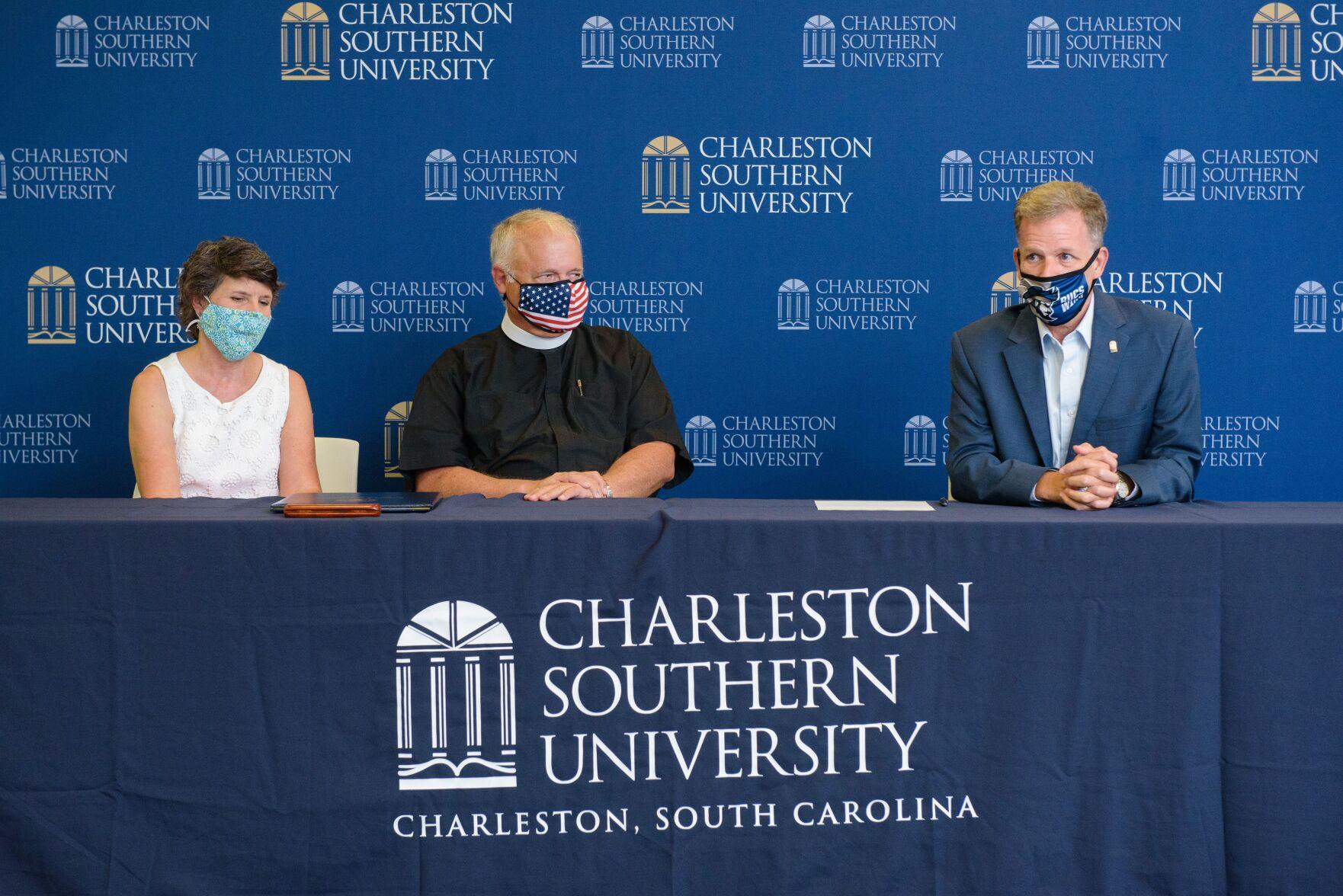 Costin announced the Deweys’ commitment with a formal signing

The Dorchester District 2 school board approved a start date to the 2020-2021 school year.

The district presented three options for days to re-open and the school board approved the third option which will include teachers going back to school on August 31st and students returning September 8th.

The district is currently looking at learning options for students when schools eventually return as well. These include online learning, hybrid learning and traditional face-to-face learning. These options will all be dependent upon the threat level of COVID-19 when students return.

The extra time between bells will be necessary to clean and sanitize buses between routes officials said.

District officials also said they hope to hold LEAP days — Learning, Evaluate, Analyze, Prepare — which were recommended by state superintendent Molly Spearman to help students readjust to coming back after the long time away.

This will be five nights that are voluntary for teachers and students but will be a chance to become reacquainted with their schools and teachers. Those will take place Aug. 24-28.

Unemployment rates across the state showed a sharp recovery in June as more people went back to work in the wake of the coronavirus, according to the Department of Employment and Workforce.

The most recent survey by DEW was released early Friday, July 17 included data collected by its monthly Household Survey.

Around the state, the seasonally adjusted, monthly survey of households estimated the number of South Carolinians working increased to 2,222,144. That is a significant increase of 105,714 people over May 2020, however it’s also a significant decrease of 80,904 people over June 2019.

Nationally, the unemployment rate declined from 13.3 percent in May to 11.1 percent in June. Closer to home, the news was a little better.

“There are many promising economic indicators in June’s Employment Situation, as reported in the seasonally adjusted, monthly survey of South Carolinians,” said Dan Ellzey, DEW’s executive director. “More than 105,000 people rejoined the workforce since last month’s release. That means we now have more than 2,222,000 South Carolinians working. While that is not as high as the March level, it does show great improvement.”

Next door in Berkeley County, the June unemployment rate stood at 8.3 percent, down from 11 percent in May, but significantly higher than a year ago at the same time when the county’s unemployment rate was among the best in the state at just 2.8 percent.

According to DEW officials, another economic marker to note is the drastic decrease in the state’s seasonally adjusted unemployment rate to 8.7%.

“While that is nowhere near the March level of 3.2 percent, it is dramatically better than the May number of 12.4 percent,” Ellzey said. “It is also significantly better than the US national average of 11.1 percent. These positive economic numbers would not have been possible without the reopening of the state. It is encouraging to see that our businesses can re-open and comply with strict safety protocols to protect employees and customers. The continued success of our businesses, to both re-open and remain safe, is imperative for the state’s economic recovery.”

However, according the the South Carolina Department of Health and Environmental Control, June also saw a continued increase of coronavirus cases. The seven-day average of reported coronavirus cases jumped from 280 on June 1 to 1,394 on June 30. New case went from 294 per day to 1,753 per day for the month of June.

“There is still a long way to go and there’s much work to be done,” Ellzey said. “We still have South Carolinians filing initial claims at a rate that is double of what we saw in 2009. We will continue to process these claims as quickly as possible and get benefits into the hands of eligible claimants.”

Decreases were noticed only in the Information sector with 200 jobs cut. 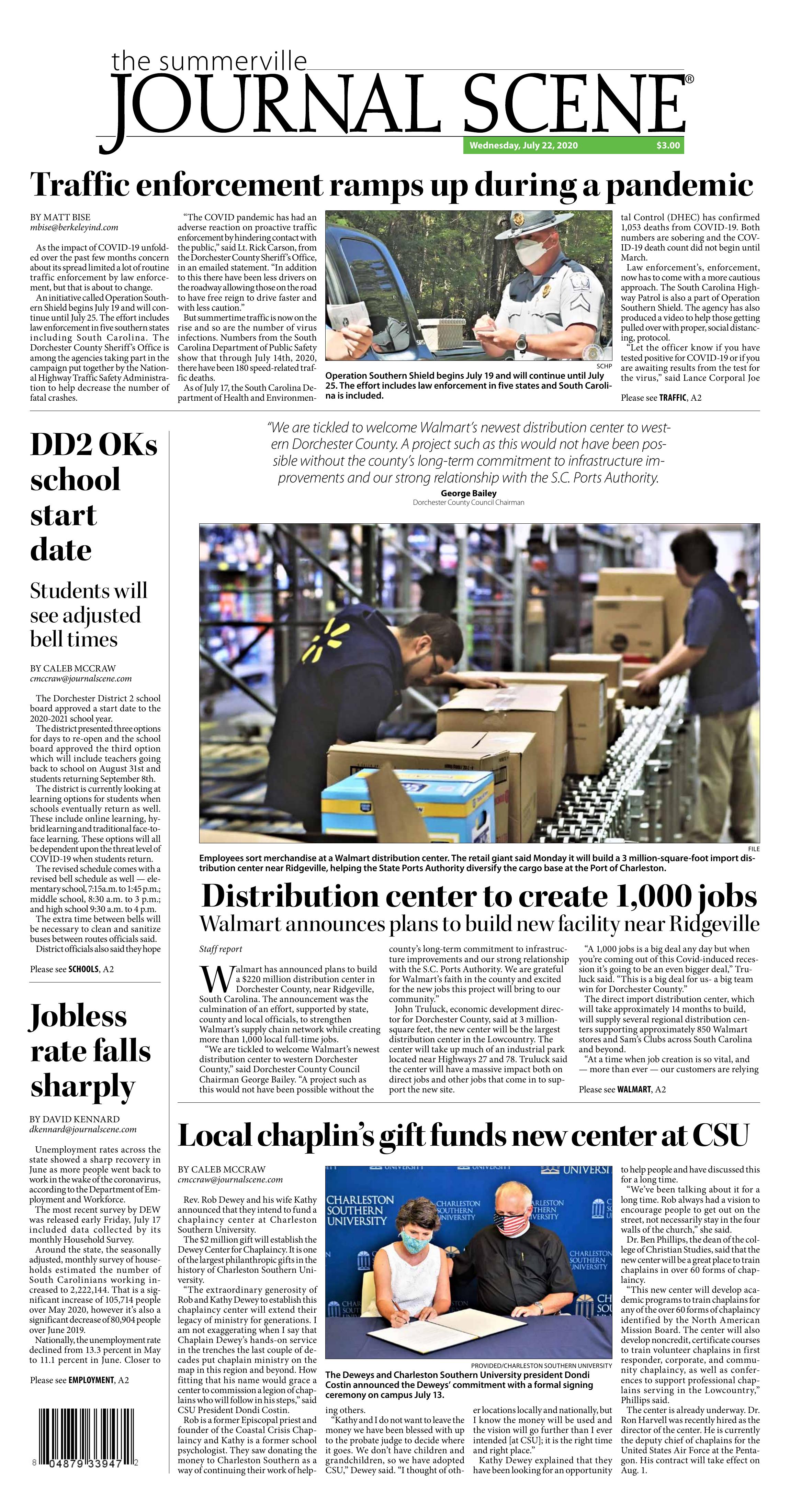