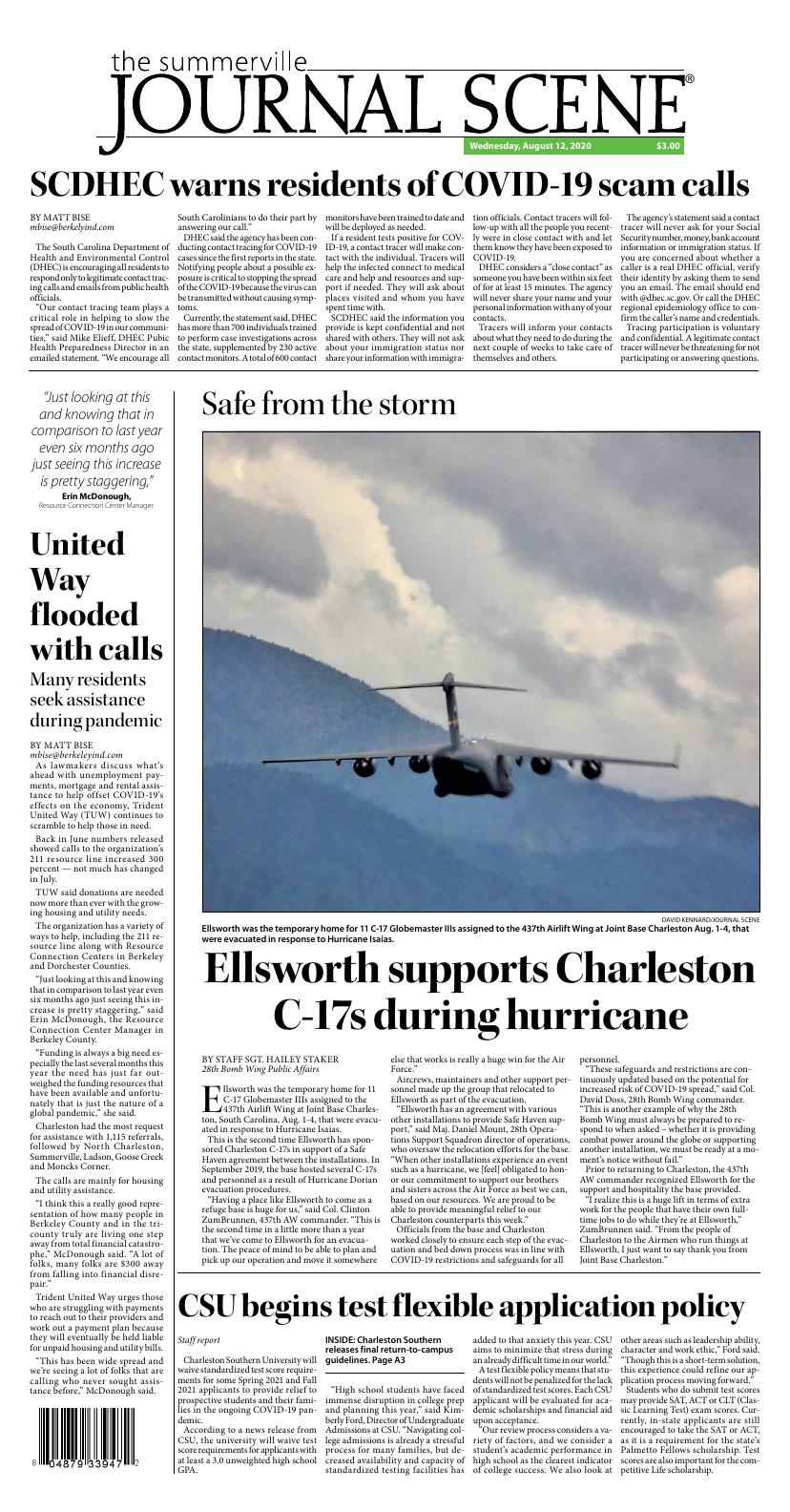 The South Carolina Department of Health and Environmental Control (DHEC) is encouraging all residents to respond only to legitimate contact tracing calls and emails from public health officials.

“Our contact tracing team plays a critical role in helping to slow the spread of COVID-19 in our communities,” said Mike Elieff, DHEC Pubic Health Preparedness Director in an emailed statement. “We encourage all South Carolinians to do their part by answering our call.”

DHEC said the agency has been conducting contact tracing for COVID-19 cases since the first reports in the state. Notifying people about a possible exposure is critical to stopping the spread of the COVID-19 because the virus can be transmitted without causing symptoms.

Currently, the statement said, DHEC has more than 700 individuals trained to perform case investigations across the state, supplemented by 230 active contact monitors. A total of 600 contact monitors have been trained to date and will be deployed as needed.

If a resident tests positive for COVID-19, a contact tracer will make contact with the individual. Tracers will help the infected connect to medical care and help and resources and support if needed. They will ask about places visited and whom you have spent time with.

SCDHEC said the information you provide is kept confidential and not shared with others. They will not ask about your immigration status nor share your information with immigration officials. Contact tracers will follow-up with all the people you recently were in close contact with and let them know they have been exposed to COVID-19.

DHEC considers a “close contact” as someone you have been within six feet of for at least 15 minutes. The agency will never share your name and your personal information with any of your contacts.

Tracers will inform your contacts about what they need to do during the next couple of weeks to take care of themselves and others.

The agency’s statement said a contact tracer will never ask for your Social Security number, money, bank account information or immigration status. If you are concerned about whether a caller is a real DHEC official, verify their identity by asking them to send you an email. The email should end with @dhec.sc.gov. Or call the DHEC regional epidemiology office to confirm the caller’s name and credentials.

Tracing participation is voluntary and confidential. A legitimate contact tracer will never be threatening for not participating or answering questions.

Ellsworth was the temporary home for 11 C-17 Globemaster IIIs assigned to the 437th Airlift Wing at Joint Base Charleston Aug. 1-4, that were evacuated in response to Hurricane Isaias.

Ellsworth was the temporary home for 11 C-17 Globemaster IIIs assigned to the 437th Airlift Wing at Joint Base Charleston, South Carolina, Aug. 1-4, that were evacuated in response to Hurricane Isaias.

This is the second time Ellsworth has sponsored Charleston C-17s in support of a Safe Haven agreement between the installations. In September 2019, the base hosted several C-17s and personnel as a result of Hurricane Dorian evacuation procedures.

“Having a place like Ellsworth to come as a refuge base is huge for us,” said Col. Clinton ZumBrunnen, 437th AW commander. “This is the second time in a little more than a year that we’ve come to Ellsworth for an evacuation. The peace of mind to be able to plan and pick up our operation and move it somewhere else that works is really a huge win for the Air Force.”

Aircrews, maintainers and other support personnel made up the group that relocated to Ellsworth as part of the evacuation.

“Ellsworth has an agreement with various other installations to provide Safe Haven support,” said Maj. Daniel Mount, 28th Operations Support Squadron director of operations, who oversaw the relocation efforts for the base. “When other installations experience an event such as a hurricane, we [feel] obligated to honor our commitment to support our brothers and sisters across the Air Force as best we can, based on our resources. We are proud to be able to provide meaningful relief to our Charleston counterparts this week.”

Officials from the base and Charleston worked closely to ensure each step of the evacuation and bed down process was in line with COVID-19 restrictions and safeguards for all personnel.

“These safeguards and restrictions are continuously updated based on the potential for increased risk of COVID-19 spread,” said Col. David Doss, 28th Bomb Wing commander. “This is another example of why the 28th Bomb Wing must always be prepared to respond to when asked – whether it is providing combat power around the globe or supporting another installation, we must be ready at a moment’s notice without fail.”

Prior to returning to Charleston, the 437th AW commander recognized Ellsworth for the support and hospitality the base provided.

“I realize this is a huge lift in terms of extra work for the people that have their own full-time jobs to do while they’re at Ellsworth,” ZumBrunnen said. “From the people of Charleston to the Airmen who run things at Ellsworth, I just want to say thank you from Joint Base Charleston.”

Charleston Southern University is requiring all esidential students to take a COVID-19 test prior to their move-in date this year.

Charleston Southern University will waive standardized test score requirements for some Spring 2021 and Fall 2021 applicants to provide relief to prospective students and their families in the ongoing COVID-19 pandemic.

According to a news release from CSU, the university will waive test score requirements for applicants with at least a 3.0 unweighted high school GPA.

“High school students have faced immense disruption in college prep and planning this year,” said Kimberly Ford, Director of Undergraduate Admissions at CSU. “Navigating college admissions is already a stressful process for many families, but decreased availability and capacity of standardized testing facilities has added to that anxiety this year. CSU aims to minimize that stress during an already difficult time in our world.”

A test flexible policy means that students will not be penalized for the lack of standardized test scores. Each CSU applicant will be evaluated for academic scholarships and financial aid upon acceptance.

“Our review process considers a variety of factors, and we consider a student’s academic performance in high school as the clearest indicator of college success. We also look at other areas such as leadership ability, character and work ethic,” Ford said. “Though this is a short-term solution, this experience could refine our application process moving forward.”

Students who do submit test scores may provide SAT, ACT or CLT (Classic Learning Test) exam scores. Currently, in-state applicants are still encouraged to take the SAT or ACT, as it is a requirement for the state’s Palmetto Fellows scholarship. Test scores are also important for the competitive Life scholarship.

News
United Way continues to get flooded with calls for assistance
By Matt Bise mbise@berkeleyind.com

As lawmakers discuss what’s ahead with unemployment payments, mortgage and rental assistance to help offset COVID-19’s effects on the economy, Trident United Way (TUW) continues to scramble to help those in need.

Back in June numbers released showed calls to the organization’s 211 resource line increased 300 percent — not much has changed in July.

TUW said donations are needed now more than ever with the growing housing and utility needs.

The organization has a variety of ways to help, including the 211 resource line along with Resource Connection Centers in Berkeley and Dorchester Counties.

“Just looking at this and knowing that in comparison to last year even six months ago just seeing this increase is pretty staggering,” said Erin McDonough, the Resource Connection Center Manager in Berkeley County.

“Funding is always a big need especially the last several months this year the need has just far outweighed the funding resources that have been available and unfortunately that is just the nature of a global pandemic,” she said.

Charleston had the most request for assistance with 1,115 referrals, followed by North Charleston, Summerville, Ladson, Goose Creek and Moncks Corner.

The calls are mainly for housing and utility assistance.

“I think this a really good representation of how many people in Berkeley County and in the tri-county truly are living one step away from total financial catastrophe,” McDonough said. “A lot of folks, many folks are $300 away from falling into financial disrepair.”

Trident United Way urges those who are struggling with payments to reach out to their providers and work out a payment plan because they will eventually be held liable for unpaid housing and utility bills.

“This has been wide spread and we’re seeing a lot of folks that are calling who never sought assistance before,” McDonough said. 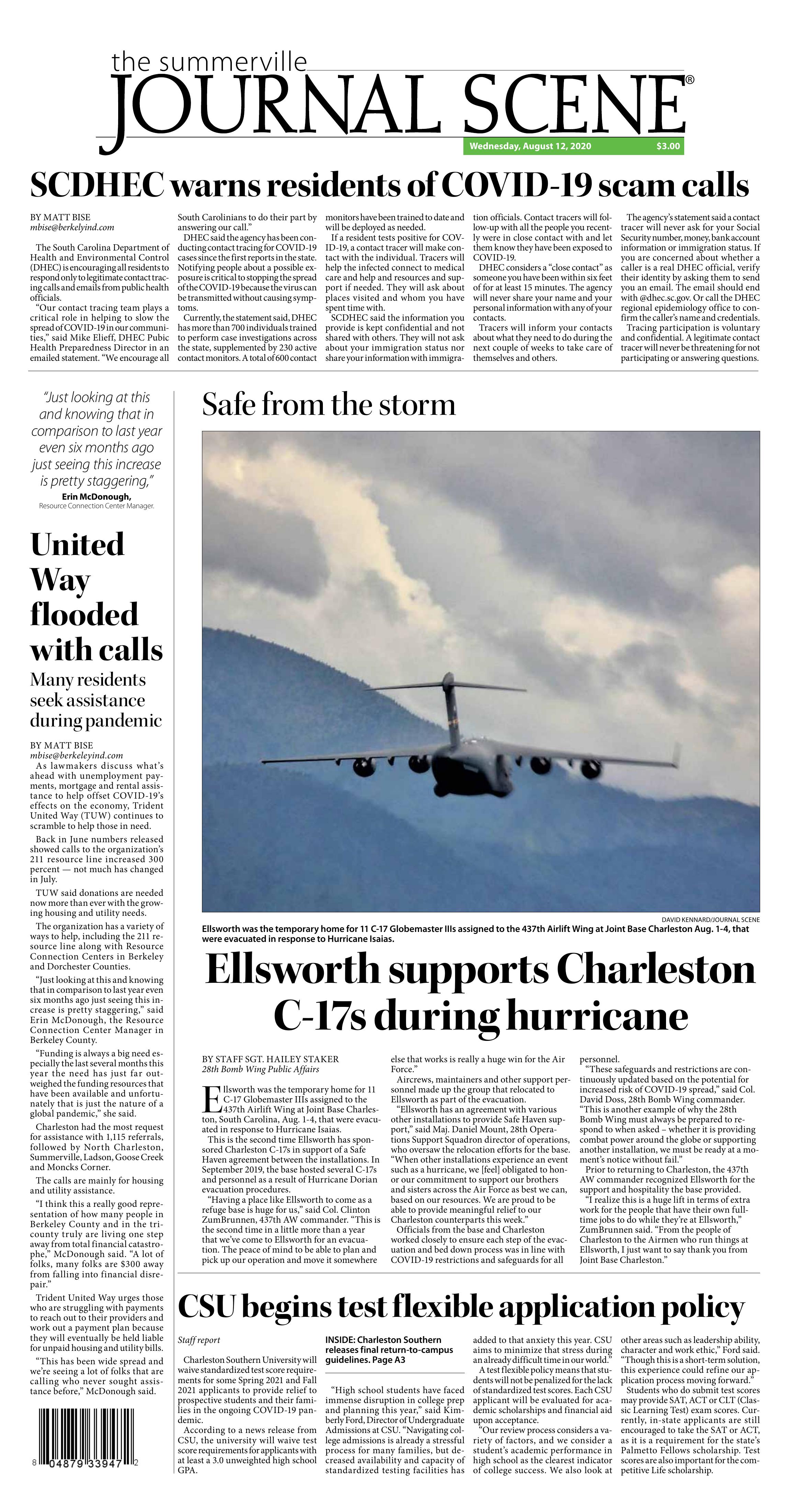