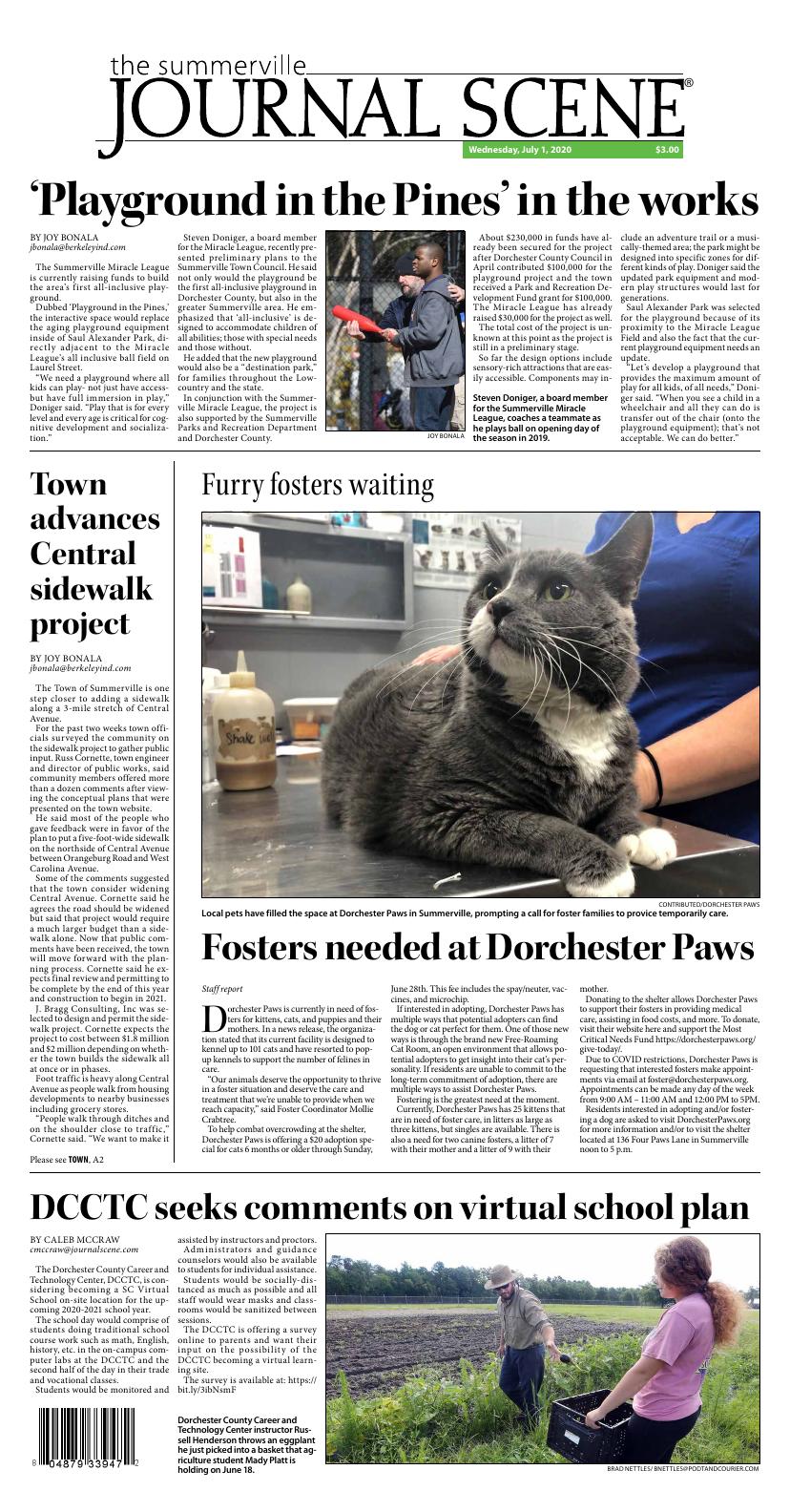 News
‘Playground in the Pines,’ an all-inclusive playground planned for Summerville
By Joy Bonala jbonala@berkeleyind.com

Steven Doniger, a board member for the Summerville Miracle League, coaches a teammate as he plays ball on opening day of the season in 2019.

Dubbed ‘Playground in the Pines,’ the interactive space would replace the aging playground equipment inside of Saul Alexander Park, directly adjacent to the Miracle League’s all inclusive ball field on Laurel Street.

“We need a playground where all kids can play- not just have access- but have full immersion in play,” said Steven Doniger, board member for the Miracle League. “Play that is for every level and every age is critical for cognitive development and socialization.”

Doniger recently presented preliminary plans to the Summerville Town Council. He said not only would the playground be the first all-inclusive playground in Dorchester County, but also in the greater Summerville area. He emphasized that ‘all-inclusive’ is designed to accommodate children of all abilities; those with special needs and those without.

He added that the new playground would also be a “destination park,” for families throughout the Lowcountry and the state.

So far the design options include sensory-rich attractions that are easily accessible. Components may include an adventure trail or a musically-themed area; the park might be designed into specific zones for different kinds of play. Doniger said the updated park equipment and modern play structures would last for generations.

Saul Alexander Park was selected for the playground because of its proximity to the Miracle League Field and also the fact that the current playground equipment needs an update.

“Let’s develop a playground that provides the maximum amount of play for all kids, of all needs,” Doniger said. “When you see a child in a wheelchair and all they can do is transfer out of the chair (onto the playground equipment); that’s not acceptable. We can do better.”

Local pets have filled the space at Dorchester Paws in Summerville, prompting a call for foster families to provice temporarily care.

Dorchester Paws is currently in need of fosters for kittens, cats, and puppies and their mothers. In a news release, the organization stated that its current facility is designed to kennel up to 101 cats and have resorted to pop-up kennels to support the number of felines in care.

“Our animals deserve the opportunity to thrive in a foster situation and deserve the care and treatment that we’re unable to provide when we reach capacity,” said Foster Coordinator Mollie Crabtree.

To help combat overcrowding at the shelter, Dorchester Paws is offering a $20 adoption special for cats 6 months or older through Sunday, June 28th. This fee includes the spay/neuter, vaccines, and microchip.

If interested in adopting, Dorchester Paws has multiple ways that potential adopters can find the dog or cat perfect for them. One of those new ways is through the brand new Free-Roaming Cat Room, an open environment that allows potential adopters to get insight into their cat’s personality. If residents are unable to commit to the long-term commitment of adoption, there are multiple ways to assist Dorchester Paws.

Fostering is the greatest need at the moment.

Donating to the shelter allows Dorchester Paws to support their fosters in providing medical care, assisting in food costs, and more. To donate, visit their website here and support the Most Critical Needs Fund https://dorchesterpaws.org/give-today/.

Due to COVID restrictions, Dorchester Paws is requesting that interested fosters make appointments via email at foster@dorchesterpaws.org. Appointments can be made any day of the week from 9:00 AM – 11:00 AM and 12:00 PM to 5PM.

Residents interested in adopting and/or fostering a dog are asked to visit DorchesterPaws.org for more information and/or to visit the shelter located at 136 Four Paws Lane in Summerville noon to 5 p.m.

The school day would comprise of students doing traditional school course work such as math, English, history, etc. in the on-campus computer labs at the DCCTC and the second half of the day in their trade and vocational classes.

Students would be monitored and assisted by instructors and proctors.

Administrators and guidance counselors would also be available to students for individual assistance.

Students would be socially-distanced as much as possible and all staff would wear masks and classrooms would be sanitized between sessions.

The DCCTC is offering a survey online to parents and want their input on the possibility of the DCCTC becoming a virtual learning site.

The survey is available at: https://bit.ly/3ibNsmF

The Town of Summerville is one step closer to adding a sidewalk along a 3-mile stretch of Central Avenue.

For the past two weeks town officials surveyed the community on the sidewalk project to gather public input. Russ Cornette, town engineer and director of public works, said community members offered more than a dozen comments after viewing the conceptual plans that were presented on the town website.

He said most of the people who gave feedback were in favor of the plan to put a five-foot-wide sidewalk on the northside of Central Avenue between Orangeburg Road and West Carolina Avenue.

Some of the comments suggested that the town consider widening Central Avenue. Cornette said he agrees the road should be widened but said that project would require a much larger budget than a sidewalk alone. Now that public comments have been received, the town will move forward with the planning process. Cornette said he expects final review and permitting to be complete by the end of this year and construction to begin in 2021.

J. Bragg Consulting, Inc was selected to design and permit the sidewalk project. Cornette expects the project to cost between $1.8 million and $2 million depending on whether the town builds the sidewalk all at once or in phases.

Foot traffic is heavy along Central Avenue as people walk from housing developments to nearby businesses including grocery stores.

“People walk through ditches and on the shoulder close to traffic,” Cornette said. “We want to make it safer- this is a good project that will be widely used by many people.” 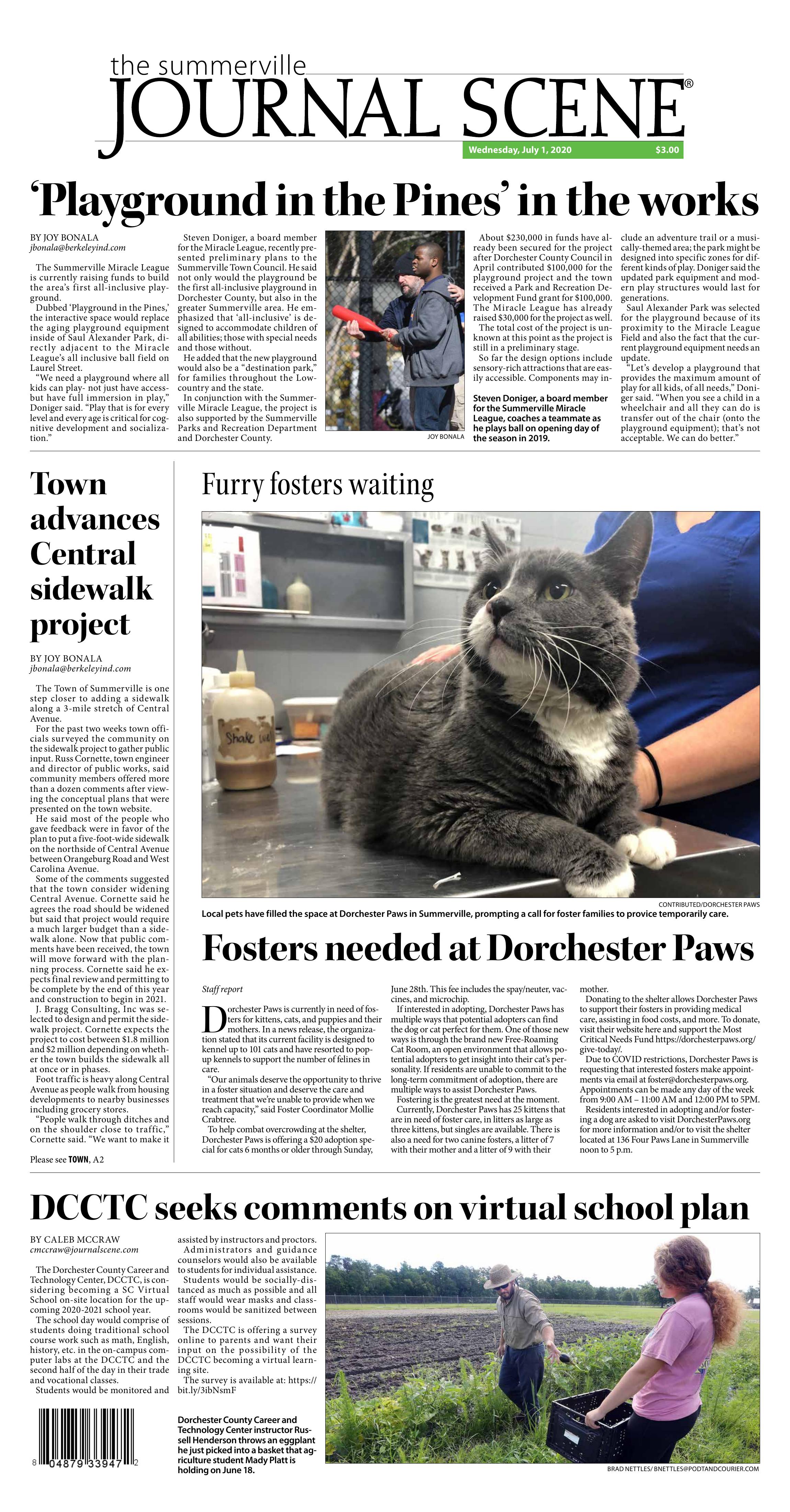