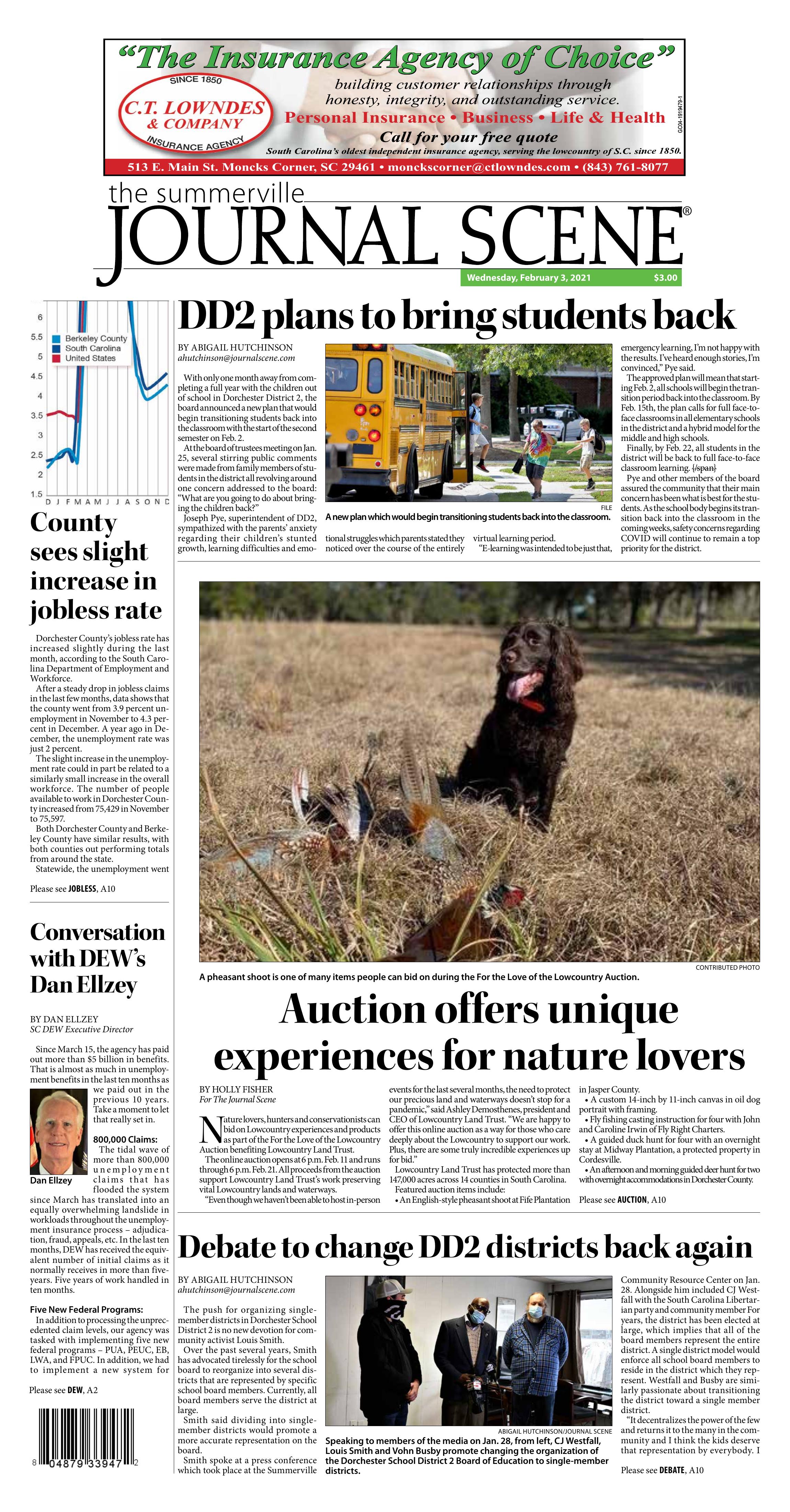 A new plan which would begin transitioning students back into the classroom.

With only one month away from completing a full year with the children out of school in Dorchester District 2, the board announced a new plan that would begin transitioning students back into the classroom with the start of the second semester on Feb. 2.

At the board of trustees meeting on Jan. 25, several stirring public comments were made from family members of students in the district all revolving around one concern addressed to the board: “What are you going to do about bringing the children back?”

Joseph Pye, superintendent of DD2, sympathized with the parents’ anxiety regarding their children’s stunted growth, learning difficulties and emotional struggles which parents stated they noticed over the course of the entirely virtual learning period.

“E-learning was intended to be just that, emergency learning, I’m not happy with the results. I’ve heard enough stories, I’m convinced,” Pye said.

The approved plan will mean that starting Feb. 2, all schools will begin the transition period back into the classroom. By Feb. 15th, the plan calls for full face-to-face classrooms in all elementary schools in the district and a hybrid model for the middle and high schools.

Finally, by Feb. 22, all students in the district will be back to full face-to-face classroom learning. {/span}

Pye and other members of the board assured the community that their main concern has been what is best for the students. As the school body begins its transition back into the classroom in the coming weeks, safety concerns regarding COVID will continue to remain a top priority for the district.

DD2 to transition to in-school classes

A pheasant shoot is one of many items people can bid on during the For the Love of the Lowcountry Auction.

Nature lovers, hunters and conservationists can bid on Lowcountry experiences and products as part of the For the Love of the Lowcountry Auction benefiting Lowcountry Land Trust.

“Even though we haven’t been able to host in-person events for the last several months, the need to protect our precious land and waterways doesn’t stop for a pandemic,” said Ashley Demosthenes, president and CEO of Lowcountry Land Trust. “We are happy to offer this online auction as a way for those who care deeply about the Lowcountry to support our work. Plus, there are some truly incredible experiences up for bid.”

Lowcountry Land Trust has protected more than 147,000 acres across 14 counties in South Carolina.

• An English-style pheasant shoot at Fife Plantation in Jasper County.

• A custom 14-inch by 11-inch canvas in oil dog portrait with framing.

• A guided duck hunt for four with an overnight stay at Midway Plantation, a protected property in Cordesville.

• An afternoon and morning guided deer hunt for two with overnight accommodations in Dorchester County.

• Sustainable forestry tour and clays shoot for four at Bailey Mill Tree Farm in Ridgeland. Forestry industry professionals Jim and Pam Porter will give a two-hour tour of 3,200 acres of American Tree Farm Certified land followed by lunch and a short sporting clays shoot on the property.

Place bids on items or purchase items immediately for a set price. Review and bid on auction items online at www.32auctions.com/lowcountrylandtrust.

Speaking to members of the media on Jan. 28, from left, CJ Westfall, Louis Smith and Vohn Busby promote changing the organization of the Dorchester School District 2 Board of Education to single-member districts.

The push for organizing single-member districts in Dorchester School District 2 is no new devotion for community activist Louis Smith.

Over the past several years, Smith has advocated tirelessly for the school board to reorganize into several districts that are represented by specific school board members. Currently, all board members serve the district at large.

Smith said dividing into single-member districts would promote a more accurate representation on the board.

Smith spoke at a press conference which took place at the Summerville Community Resource Center on Jan. 28. Alongside him included CJ Westfall with the South Carolina Libertarian party and community member For years, the district has been elected at large, which implies that all of the board members represent the entire district. A single district model would enforce all school board members to reside in the district which they represent. Westfall and Busby are similarly passionate about transitioning the district toward a single member district.

“It decentralizes the power of the few and returns it to the many in the community and I think the kids deserve that representation by everybody. I think it makes for a better community,” Busby said.

“This issue has been misdiagnosed as a partisan issue when really it’s a common sense issue,” Westfall said.

Marvin Pendarvis, South Carolina State Representative, is a key figure in the process of bringing this issue to the legislature.

“We are introducing a bill for a single-member district in Dorchester District 2, it has been drafted,” Pendarvis said.

Smith noted at the press conference that it has been approximately a decade since there has been a minority to serve on the school board. In their efforts to work together as a community to bring a more accurate representation of the 26,000 students residing in DD2 to the school board, Smith said he considers this a moment for change.

“We cannot afford another generation without having diversity on that school board. We need diversity,” Smith said.

Smith ran a failed campaign for the DD2 Board of Education in the most recent election.

In other nearby districts such as Charleston County, Orangeburg and Berkeley County, single-member districts are in place.

Smith said he is hopeful that supporting this bill will be an endeavor that brings the community together for a greater change.

“The next phase is contacting your legislators, if this is something that you agree with, you are the person we need right now. Don’t be afraid, your voice matters,” Westfall said.

Dorchester County’s jobless rate has increased slightly during the last month, according to the South Carolina Department of Employment and Workforce.

After a steady drop in jobless claims in the last few months, data shows that the county went from 3.9 percent unemployment in November to 4.3 percent in December. A year ago in December, the unemployment rate was just 2 percent.

The slight increase in the unemployment rate could in part be related to a similarly small increase in the overall workforce. The number of people available to work in Dorchester County increased from 75,429 in November to 75,597.

Both Berkeley County and Dorchester County have similar results, with both counties out performing totals from around the state.

Statewide, the unemployment went from 4.4 percent in November to 4.6 percent in December.

“The latest release shows a slight uptick to 4.6 percent in December 2020 from November’s revised unemployment rate of 4.4 percent. Unfortunately, we lost 3,646 jobs from the ranks of the employed,” said S.C. Department of Employment and Workforce Executive Director, Dan Ellzey.

Ellzey also said that December 2020 was filled with uncertainty as the CARES Act federal programs came to an end.

“We all watched and waited to see if federal extensions would be signed into law,” he said. “Now that our agency has swiftly implemented the FPUC, PUA and PEUC extensions, we are encouraging claimants to look at opportunities in the new year.”

The state agency’s Project Job One initiative continues to promote the 75,000 jobs posted in the SC Works Online Services (SCWOS) portal, according to Ellzy.

“These are great jobs, and those who are quick to take action and apply for these positions will get the best jobs,” he said. “Not only that, they will be receiving additional perks such as medical benefits and retirement opportunities. Waiting could mean missing this opportunity.

According to the most recent report provided from DEW, industries reporting employment gains were trade, transportation and Utilities (+6,900); professional and business services (+5,300); leisure and hospitality (+2,300); construction (+900); and government (+500).

Ellzey said DEW has tools to help match jobs with the unemployed or under employed.

“Conducting a few work searches each week can increase someone’s chance of finding a job exponentially, and by doing the work search through the SCWOS app at the same time they certify their UI claim in the SCDEW app, they engage in a habit that could be the key to employment,” Ellzey said.

With 2021 upon us, the S.C. Department of Employment and Workforce is looking back over the last ten months to see not only how far we have come, but also a look to what’s in store for the new year. This pandemic, unlike more typical economic recessions, has brought unforeseen challenges and while there are certainly lessons learned and things we could have done differently, the truth is, our agency has done a lot of things right.