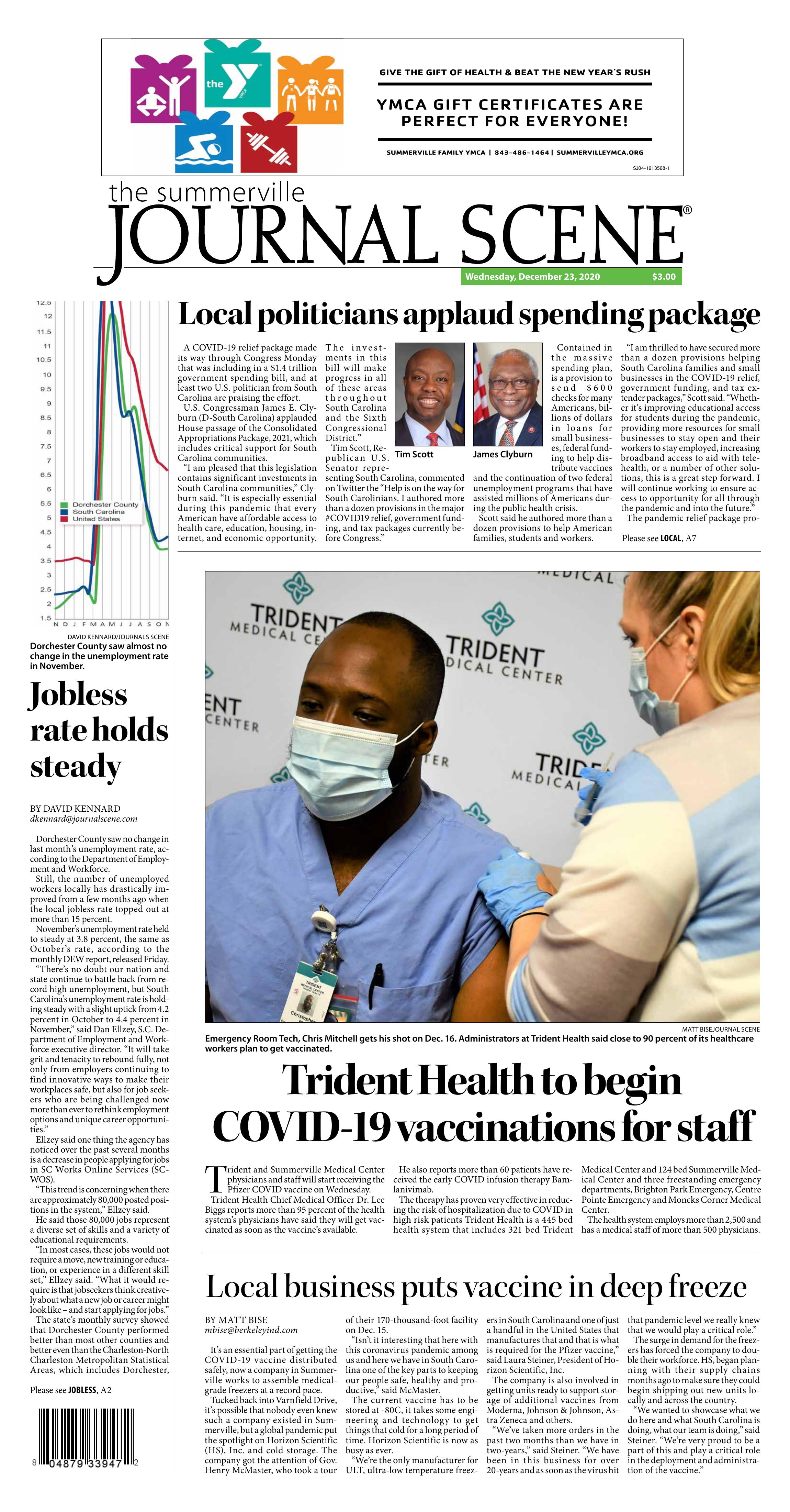 A COVID-19 relief package made its way through Congress Monday that was including in a $1.4 trillion government spending bill, and at least two U.S. politician from South Carolina are praising the effort.

“I am pleased that this legislation contains significant investments in South Carolina communities,” Clyburn said. “It is especially essential during this pandemic that every American have affordable access to health care, education, housing, internet, and economic opportunity. The investments in this bill will make progress in all of these areas throughout South Carolina and the Sixth Congressional District.”

Tim Scott, Republican U.S. Senator representing South Carolina, commented on Twitter the “Help is on the way for South Carolinians. I authored more than a dozen provisions in the major #COVID19 relief, government funding, and tax packages currently before Congress.”

Contained in the massive spending plan, is a provision to send $600 checks for many Americans, billions of dollars in loans for small businesses, federal funding to help distribute vaccines and the continuation of two federal unemployment programs that have assisted millions of Americans during the public health crisis.

Scott said he authored more than a dozen provisions to help American families, students and workers.

“I am thrilled to have secured more than a dozen provisions helping South Carolina families and small businesses in the COVID-19 relief, government funding, and tax extender packages,” Scott said. “Whether it’s improving educational access for students during the pandemic, providing more resources for small businesses to stay open and their workers to stay employed, increasing broadband access to aid with telehealth, or a number of other solutions, this is a great step forward. I will continue working to ensure access to opportunity for all through the pandemic and into the future.”

The pandemic relief package provides the following resources for the fight against COVID-19:

The national impact of the coronavirus relief provisions is three-fold and includes COVID-19 Relief Provisions, Appropriations Provisions and Legislative Provisions.

Speaking on the floor of the House in Washington, D.C., early Tuesday morning, Clyburn said Americans would benefit greatly by the bill’s passage.

“While today’s vote to provide relief to families who are suffering due to circumstances far beyond their control is welcome, it is long overdue and insufficient to fully meet their needs.

“This short-term package will provide direct payments, an unemployment benefits extension, and some assistance to help families afford rent, food, water and broadband.

“I applaud our Speaker for negotiating these critical provisions and my colleagues who came together in a bipartisan way to drive this compromise. But this package must be viewed only as a down payment,” Clyburn said.

“Public, private, parochial, charter, virtual or homeschool – whatever is best for our students is where our resources should go, period.” 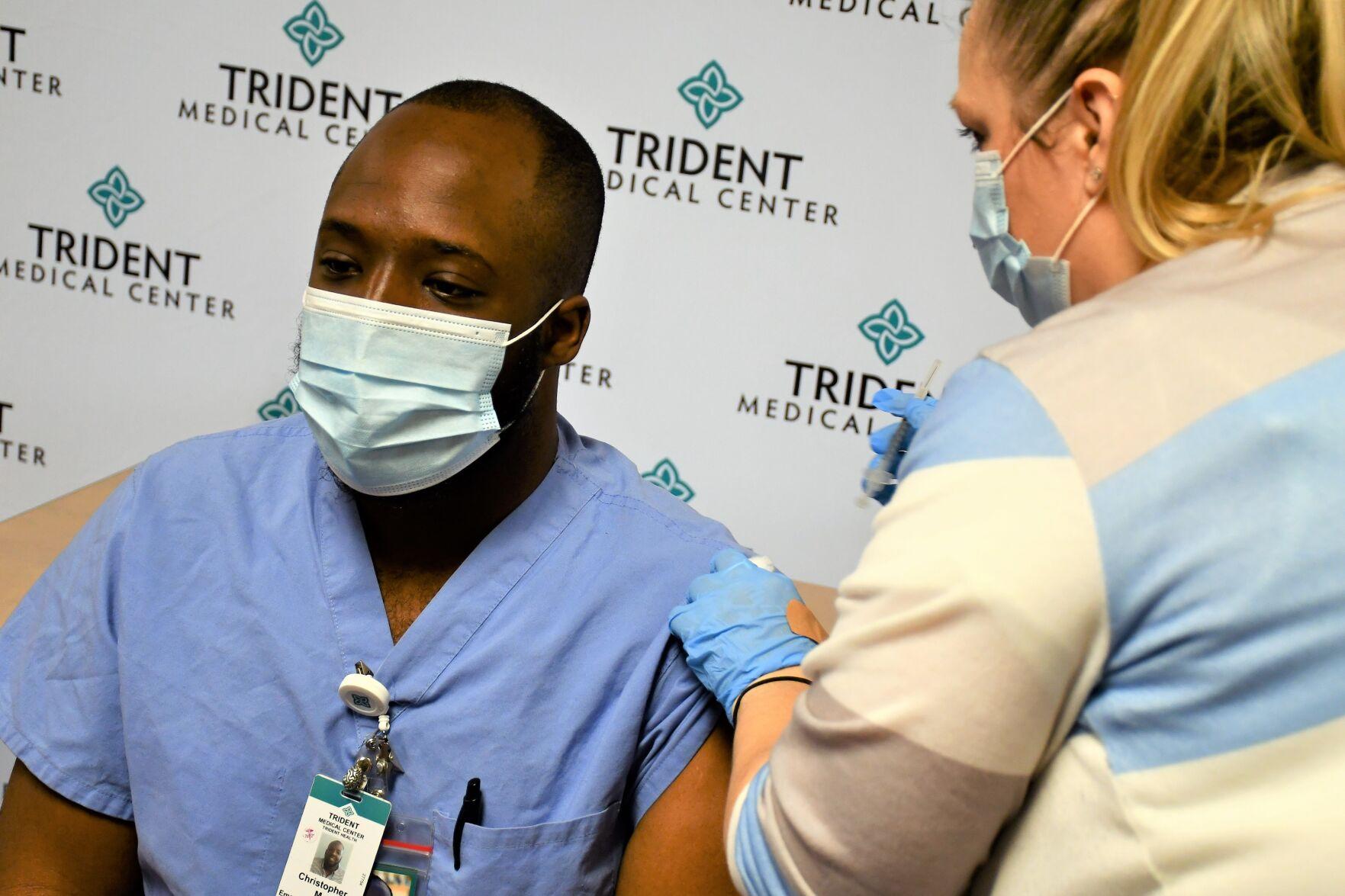 Emergency Room Tech, Chris Mitchell gets his shot on Dec. 16. Administrators at Trident Health said close to 90 percent of its healthcare workers plan to get vaccinated.

Trident Health Chief Medical Officer Dr. Lee Biggs reports more than 95 percent of the health system’s physicians have said they will get vaccinated as soon as the vaccine’s available.

The health system employs more than 2,500 and has a medical staff of more than 500 physicians.

It’s an essential part of getting the COVID-19 vaccine distributed safely, now a company in Summerville works to assemble medical-grade freezers at a record pace.

Tucked back into Varnfield Drive, it’s possible that nobody even knew such a company existed in Summerville, but a global pandemic put the spotlight on Horizon Scientific (HS), Inc. and cold storage. The company got the attention of Gov. Henry McMaster, who took a tour of their 170-thousand-foot facility on Dec. 15.

“Isn’t it interesting that here with this coronavirus pandemic among us and here we have in South Carolina one of the key parts to keeping our people safe, healthy and productive,” said McMaster.

The current vaccine has to be stored at -80C, it takes some engineering and technology to get things that cold for a long period of time. Horizon Scientific is now as busy as ever.

“We’re the only manufacturer for ULT, ultra-low temperature freezers in South Carolina and one of just a handful in the United States that manufactures that and that is what is required for the Pfizer vaccine,” said Laura Steiner, President of Horizon Scientific, Inc.

The company is also involved in getting units ready to support storage of additional vaccines from Moderna, Johnson & Johnson, Astra Zeneca and others.

“We’ve taken more orders in the past two months than we have in two-years,” said Steiner. “We have been in this business for over 20-years and as soon as the virus hit that pandemic level we really knew that we would play a critical role.”

The surge in demand for the freezers has forced the company to double their workforce. HS, began planning with their supply chains months ago to make sure they could begin shipping out new units locally and across the country.

“We wanted to showcase what we do here and what South Carolina is doing, what our team is doing,” said Steiner. “We’re very proud to be a part of this and play a critical role in the deployment and administration of the vaccine.”

Tucked back into Varnfield Drive, it’s possible that nobody even knew such a company existed in Summerville, but a global pandemic put the spo…

Dorchester County saw almost no change in the unemployment rate in November.

Dorchester County saw no change in last month’s unemployment rate, according to the Department of Employment and Workforce.

Still, the number of unemployed workers locally has drastically improved from a few months ago when the local jobless rate topped out at more than 15 percent.

November’s unemployment rate held to steady at 3.8 percent, the same as October’s rate, according to the monthly DEW report, released Friday.

“There’s no doubt our nation and state continue to battle back from record high unemployment, but South Carolina’s unemployment rate is holding steady with a slight uptick from 4.2 percent in October to 4.4 percent in November,” said Dan Ellzey, S.C. Department of Employment and Workforce executive director. “It will take grit and tenacity to rebound fully, not only from employers continuing to find innovative ways to make their workplaces safe, but also for job seekers who are being challenged now more than ever to rethink employment options and unique career opportunities.”

Ellzey said one thing the agency has noticed over the past several months is a decrease in people applying for jobs in SC Works Online Services (SCWOS).

“This trend is concerning when there are approximately 80,000 posted positions in the system,” Ellzey said.

He said those 80,000 jobs represent a diverse set of skills and a variety of educational requirements.

“In most cases, these jobs would not require a move, new training or education, or experience in a different skill set,” Ellzey said. “What it would require is that jobseekers think creatively about what a new job or career might look like – and start applying for jobs.”

The state’s monthly survey showed that Dorchester County performed better than most other counties and better even than the Charleston-North Charleston Metropolitan Statistical Areas, which includes Dorchester, Charleston and Berkeley counties. The region recorded an unemployment rate of 4.0. slightly higher than Dorchester County’s rate of 3.9 percent.

The county still has room to improve to return to pre-coronavirus numbers. In November 2019, Dorchester County recorded a jobless rate of 1.9 percent, which is considered by most economists as full employment.

Contributing to last month’s unemployment rate was a slight loss of available workers. According to data provided to the Journal Scene, Dorchester County had 77,578 people in the labor pool in October. A month later that dropped to 75,378. However, DEW officials stress that jobs are available.

“There are very good jobs out there with benefits and salaries that can help provide better financial stability than unemployment insurance ever could,” Ellzey said. “And, most jobs provide medical benefits, something no one gets with unemployment benefits. Through November, our agency has sent 1.3 million direct messages to UI claimants with customized information about area job fairs, hiring events and open jobs that match the skills reported by the claimant in the benefits system. We hope people will use these leads in a job search.”

Across the state, Marlboro County recorded the highest unemployment rate of 7.1 percent. Saluda County east of Columbia posted the lowest rate of 3.1 percent.

Ellzey stressed that South Carolina’s economy continues to change and that even before the coronavirus struck, employees who fared best were those willing to slide into different jobs requiring similar skillsets.

“I recently heard a story about a woman who was a waitress for many years, but was encouraged to pursue a customer service role in a call center,” Ellzey said. “Not only was her skillset a perfect match, she’s thrived in the new environment. Call centers nationwide are seeing massive hiring increases due to demand. This is just one type of business that’s flourishing in the pandemic and an example of how you can leverage your skillset in one industry to land a good paying job in another.

“If you don’t know where to start, our SC Works center partners statewide are ready, eager and willing to help, Ellzey said. “They are connected with employers who are hiring right now. The first step can be the hardest, but employment will be worth it.”