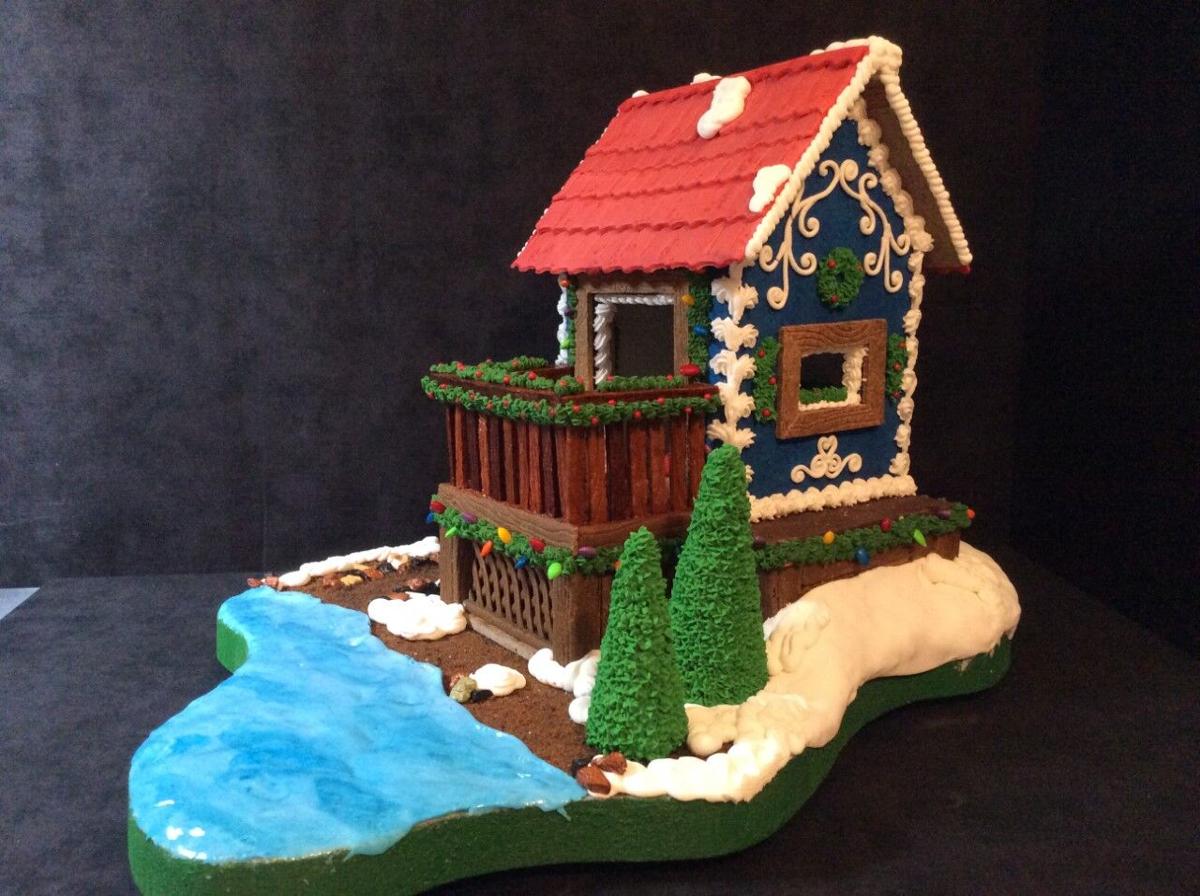 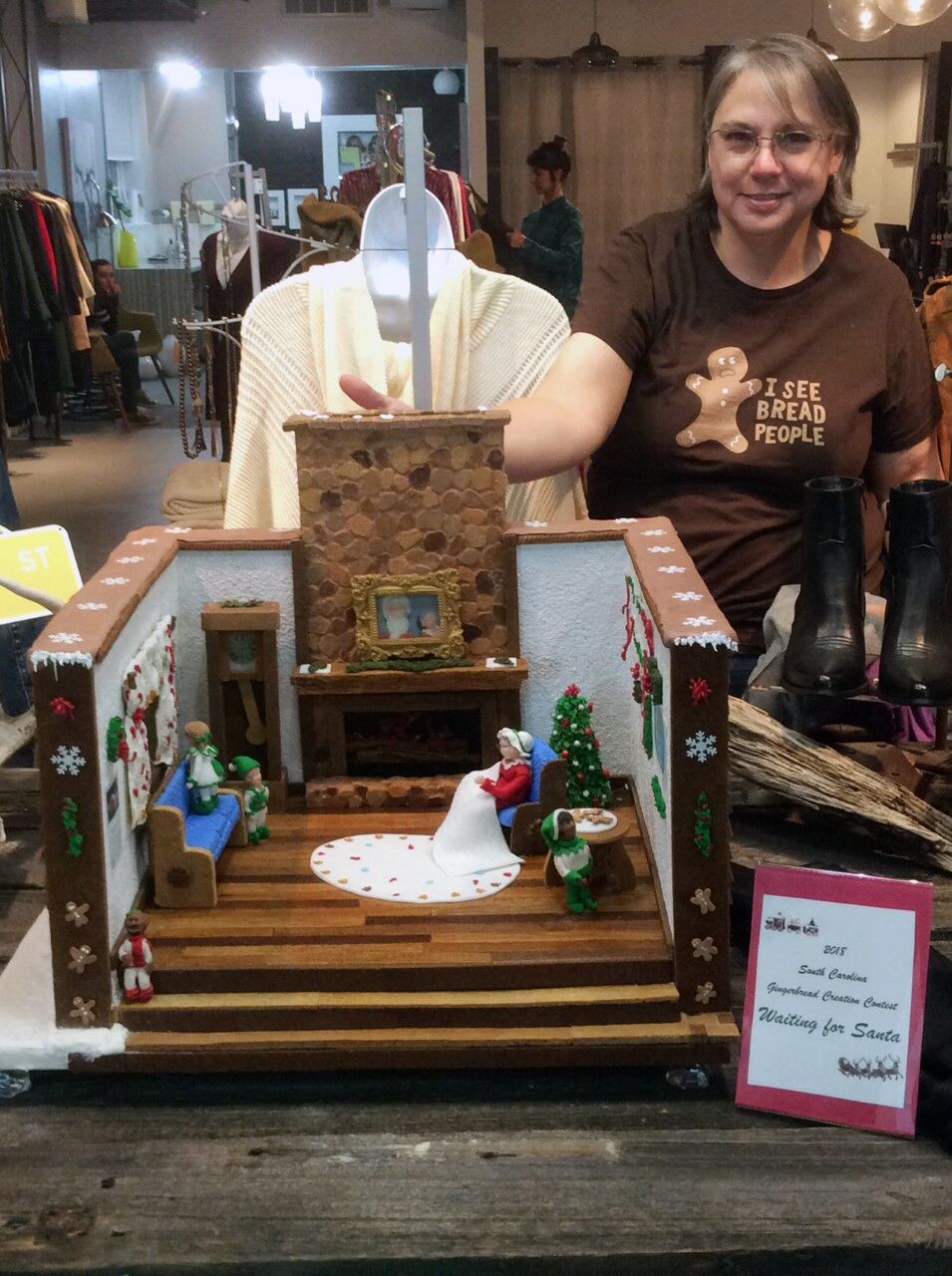 Teena Ham pictured with her gingerbread creation from the first year that she entered in the Summerville Gingerbread competition in 2018. The artwork was titled 'Waiting for Santa' and won first place in the competition.

Teena Ham pictured with her gingerbread creation from the first year that she entered in the Summerville Gingerbread competition in 2018. The artwork was titled 'Waiting for Santa' and won first place in the competition.

For seven years, Sherry Martschink, who owns Antiques and Artisans Village in Summerville, has brought a little extra holiday cheer to the town.

Martschink and her husband first opened the store back in 2014. Shortly after, they decided to start up a gingerbread creation competition with only one rule: each creation must be at least 95 percent edible.

"We don't say that they have to be houses and they don't have to be gingerbread, they just have to be (edible) material," Martschink said. “I have been totally amazed by some of the creations we get. There are some really talented people around here that come up with such creative things.”

Each year, a little more than 20 community members tend to participate in the competition. Even last year during the first holiday season with COVID-19, Martschink said, the competition had a great turnout.

“I was surprised, but we had a lot of people come out and look at them,” Martschink said.

The winner will be selected by a mixture of a group of judges' choice and the public's vote. Community members can vote by stopping in the store and casting a ballot for their favorite creation. Each vote costs $1, and all of the money raised from the competition will be donated to the local animal shelter H.F. Help No Kill Rescue.

"We encourage teams and families to submit them, but typically it's just individuals," Martschink said.

Last year, North Charleston resident Teena Ham won first place in the store's competition. But her 2020 gingerbread creation, which depicted a lakeside Christmas scene, was not her first win. For the last three years, Ham's creative gingerbread designs have been selected as first place.

"It gives us time to express sometimes what we want our Christmas to look like or what you envision or different ideas," Ham said. "It lets our imagination go and have fun."

Ham, who teaches at the College of Charleston, first began getting noticed for her edible artwork many years ago. She would make the occasional cake for a friend's birthday party or event. But after making an intricate cake that resembled the layout of the Citadel court yard for someone's graduation party, her work began catching speed. Soon, she was registered to compete in the National Gingerbread House Competition that takes place each year in Asheville, N.C.

"Someone I knew was having a party for some Citadel graduates and she asked me to make a cake of the Citadel court yard and barracks. When my (co-worker) saw the cake, he called me to his office, turned around and handed me the registration to the contest," Ham said. "He kind of twisted my arm into it, but I love it and I've been hooked ever since."

Ham has been competing nationally almost every year since she first started in 2013. It's an effort that takes months of preparation, planning and creative thinking. Ham says that participants in the competition will start preparing for the year's competition, which takes place in November, as early as February.

"You can see it on TV and see pictures, but the pictures don't do it justice to the art that everyone brings to the competition," Ham said. "The night after they have the awards ceremony, people already know what they are going to do in the next year's competition. It's crazy tough."

The hard work has paid off for Ham though. After winning last year's competition, Ham posted a photo to a Facebook group that contains a host of gingerbread house making fans. The picture caught people's eye, notably, a staff member from a casting company for Food Network.

"I actually posted a picture of a piece that I took to the Summerville contest last year. Some people that were also in that group were from a casting company and they sent me a direct message asking me if I wanted to try out for the show," Ham said. "It was amazing that they reached out to me, I had no idea that I would take it to that level."

Ham said once in contact with the casters, the process of trying out for and filming for the show happened quickly.

Ham said the filming for the show took place over the summer and now it has finally aired. The show originally aired on Monday, Nov. 22 on Food Network's Holiday Baking Championship: Gingerbread Showdown at 9 p.m.

The deadline to register for the Summerville Gingerbread Creation Competition was Nov. 20, and the creations will be accepted Dec. 4 and 5. All creations will be on display in the store until the end of December.