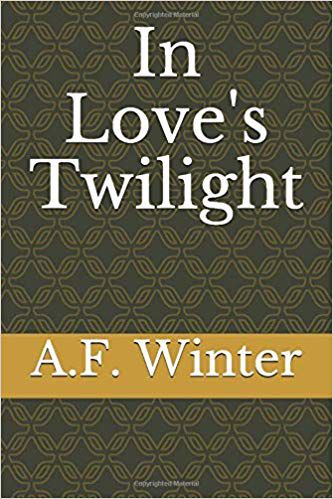 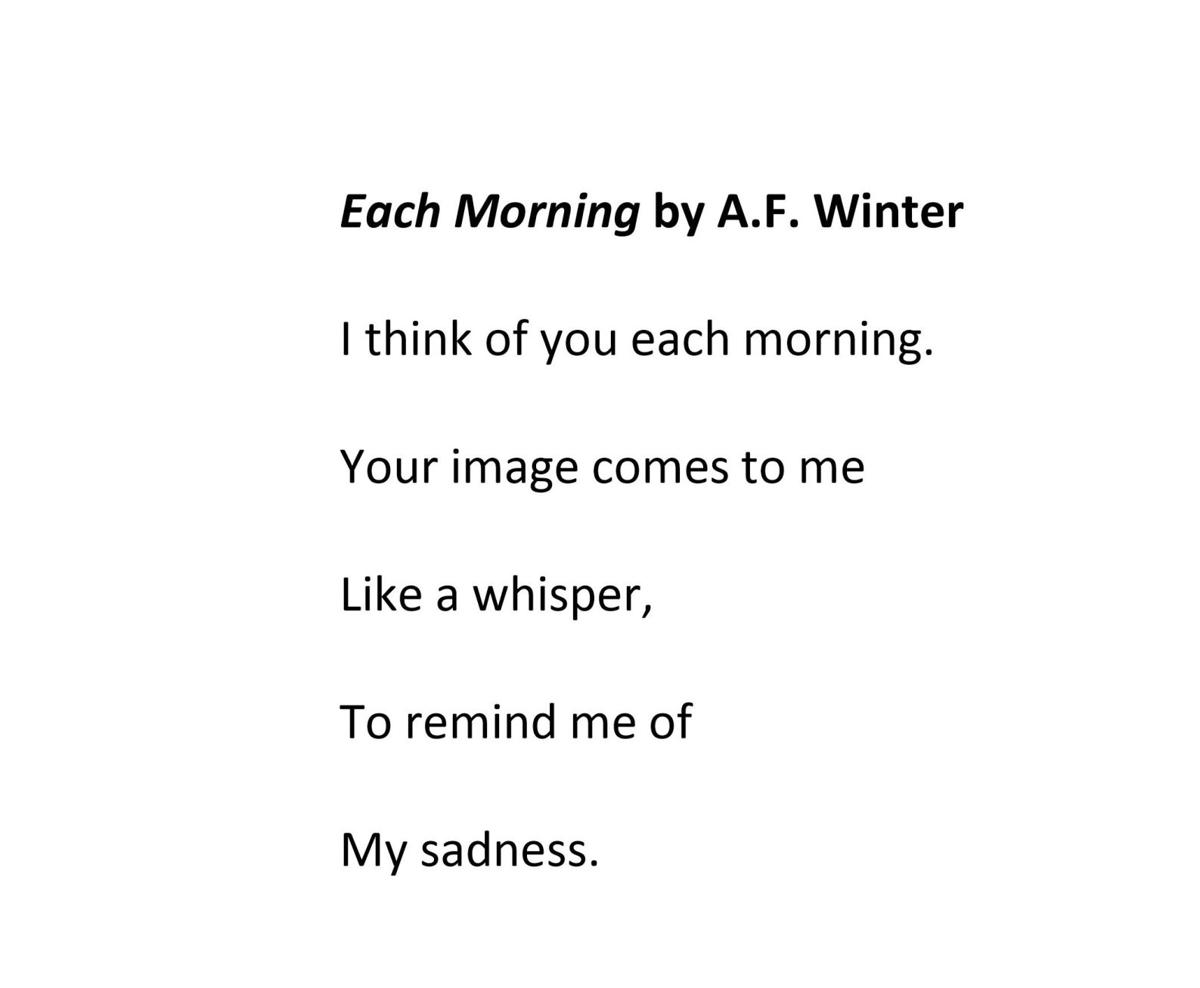 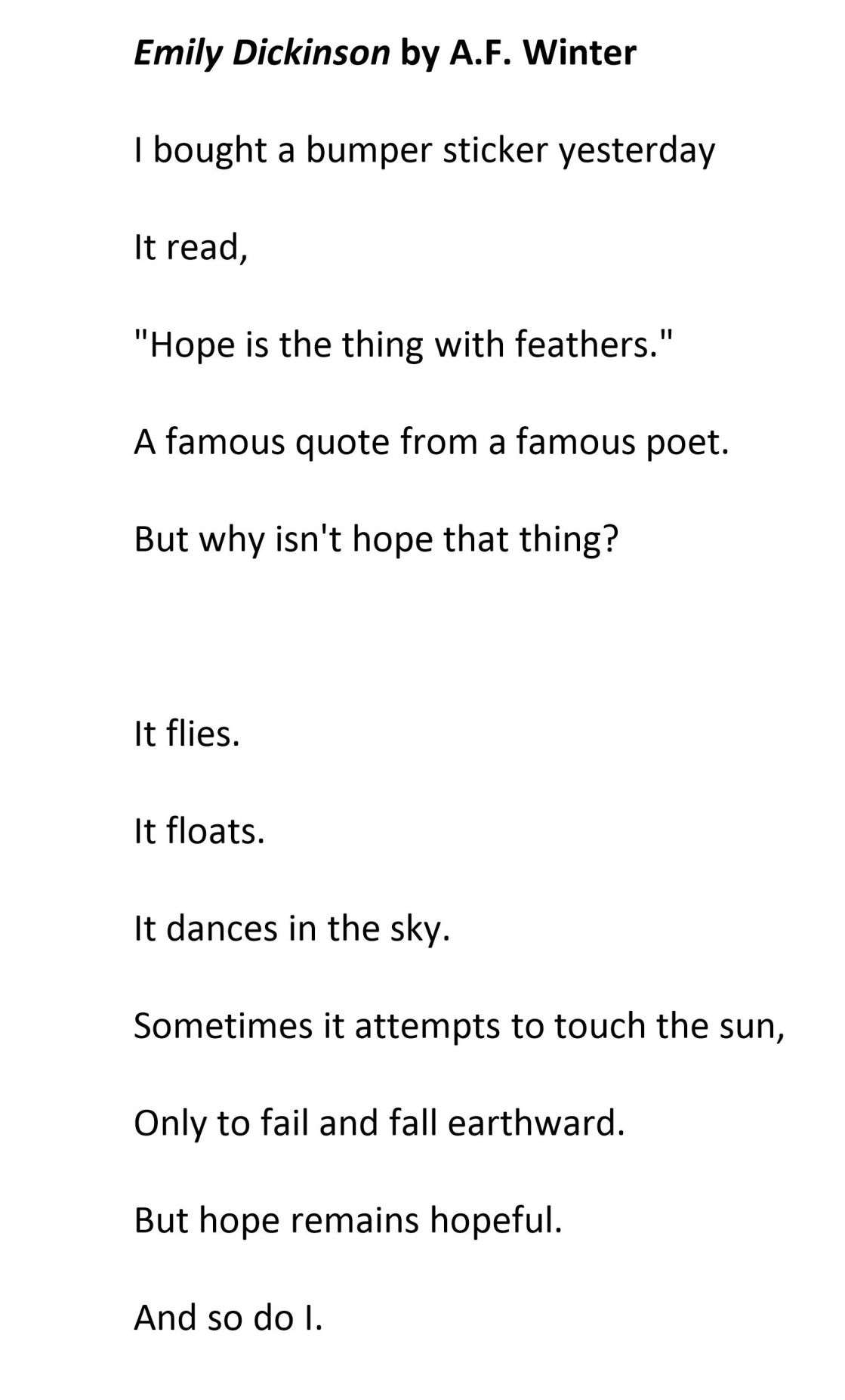 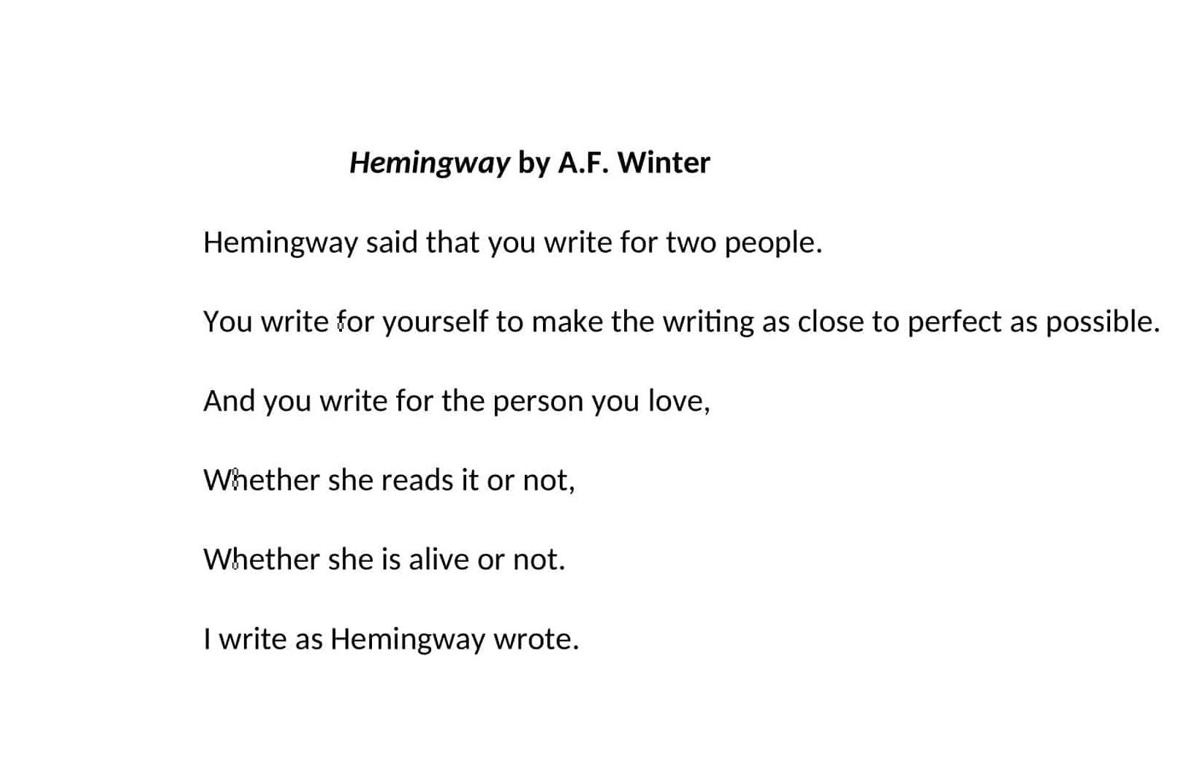 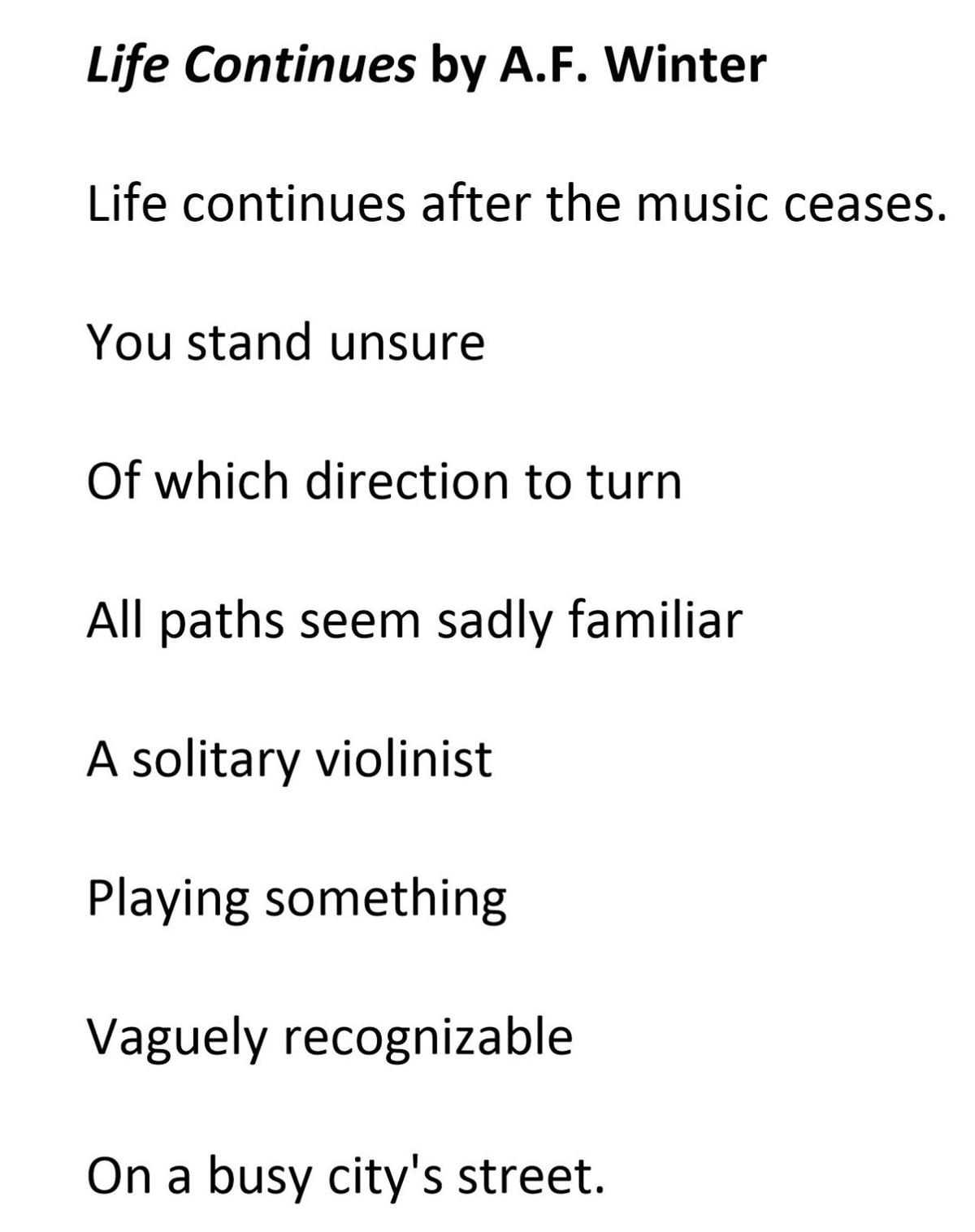 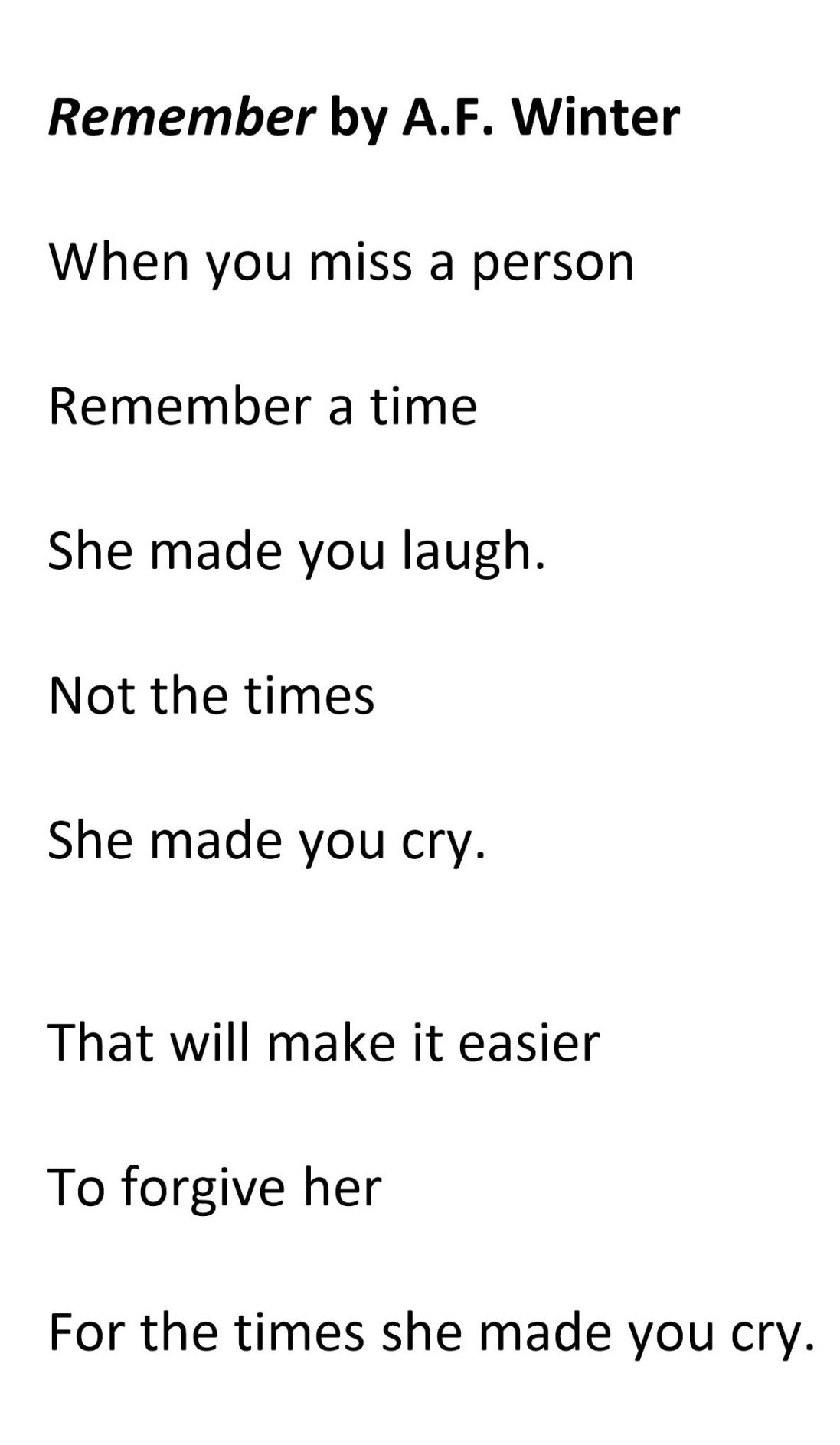 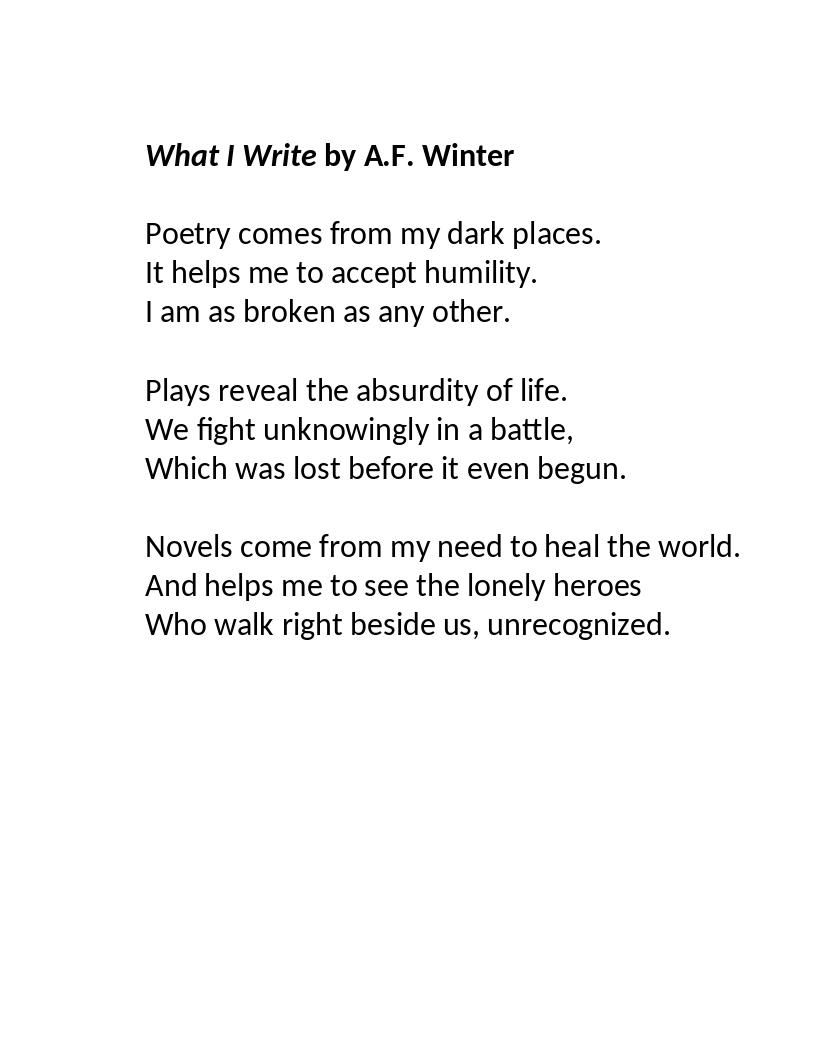 Having attended one of the author series at Timrod Library, a lady there referred me to local writer A.F. Winter.

Winter has dabbled in various writing genres, from writing novels, books of poetry, more than three dozen plays and short stories. He also has a blog: https://oxrider.wordpress.com.

Regan: When did you get both the writing and acting bug?

Winter: I’ve always written. I still have scripts from ventriloquist acts I performed with by brother when I was in first grade. Yet, I first knew I had something to write when I woke up in a jail cell in Manchester, England for public intoxication.

I suspect the real reason for my incarceration was that after I became publicly intoxicated, I fell asleep in the lap of the statue of Queen Victoria in Piccadilly Gardens. I recounted the whole story vividly in the West Didsbury Gazette in the spring of 1980. Funnily enough, that very jail cell I now call Salvatore after one of the many colorful, violent criminals whom I met there. It was in that cell, as my biographers tell me, that I hatched the kernel of the idea for my novel, “A Walk in the Valley”, about a homeless alcoholic with the ability to see ghosts. This book took me 30 years to finish! As I languishly wrote my novel, other ideas flooded my mind, and I began to write in other forms as well.

R: You’ve written novels, poetry, and plays. What style of writing do you prefer?

R: Who is your favorite writer (of either books, poetry or theatre)—would it be Shakespeare?

W: I love W.B. Yeats, Edgar Allen. Poe, T.S. Elliot, and J.A.A. Joyce although I must admit I have not been able to read “Ulysses” in its entirety. I believe the furthest I got was page 36, but it is still dang good writing. As far as the theater goes, my favorites are Shakespeare, Brecht, and Beckett. I also like to hear new voices and not just dead white guys. Frequently, I will share my work at the writer’s group at Main Street Reads in Summerville, Monday nights from 6:30-8 p.m.

R: What are some highlights of your career thus far?

W: I have published in international and regional poetry magazines. My plays have been performed up and down the east coast and Europe. I have been the featured poet at Monday Night Poetry and Music in Charleston and read my work at the Irish American Writers and Artists Salon in New York City.

R: What words of wisdom would you impart to those seeking a career in either writing or acting?

I write as Hemingway wrote and you should, too. He also said, “Writing is easy, all you have to do is sit at the typewriter and bleed.”

This is good advice and the reason why I’m never far from a box of tissues.

R: What is next for you in the writing realms?

W: I have several projects in the works. I am editing a novel about an inept insurance salesman who gets into the most embarrassing situations while his marriage is falling apart.

I have two books of poetry in various stages of completion.

“My Maude” is about the poet’s obsession with his muse. The second one, as of yet untitled, has several amusing poems about small rodents.

I have two children’s books I am finishing. The first one is a mixture of Lewis Carroll and Dr. Seuss. The second one is an homage to Ginsberg’s “Howl”.