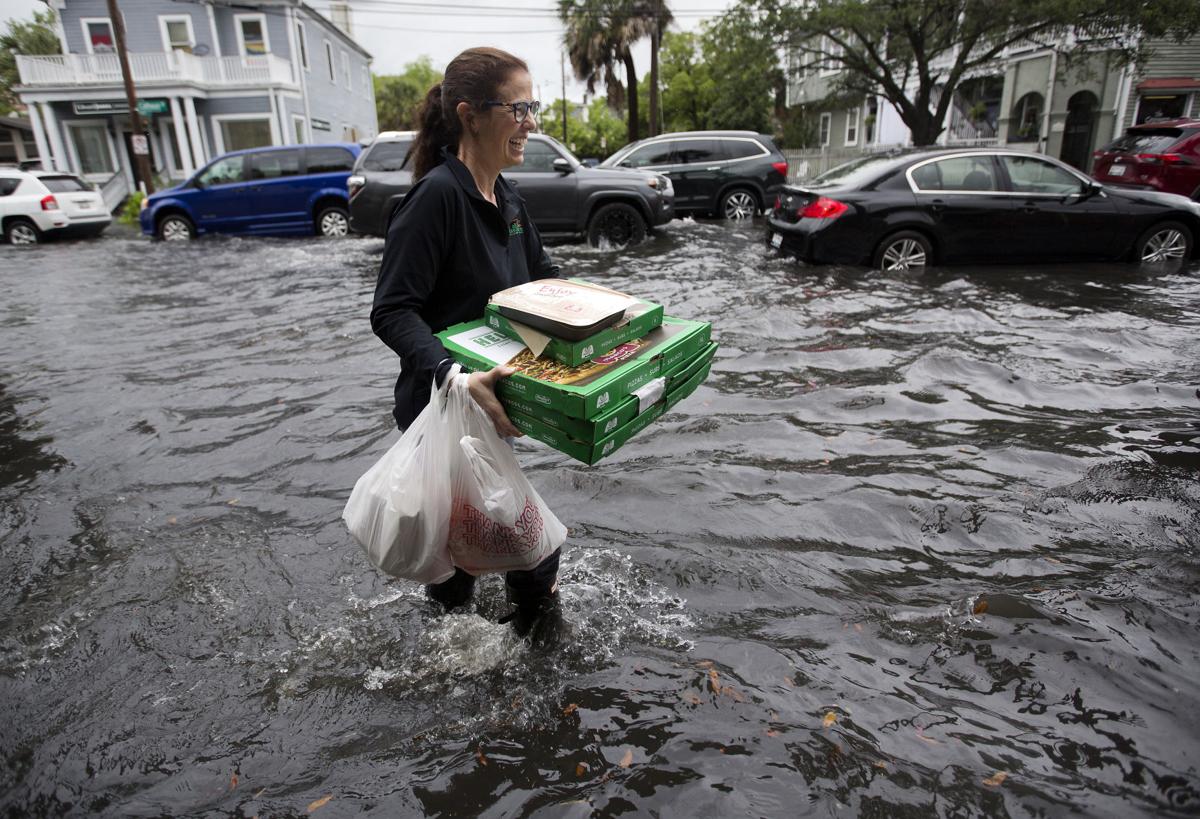 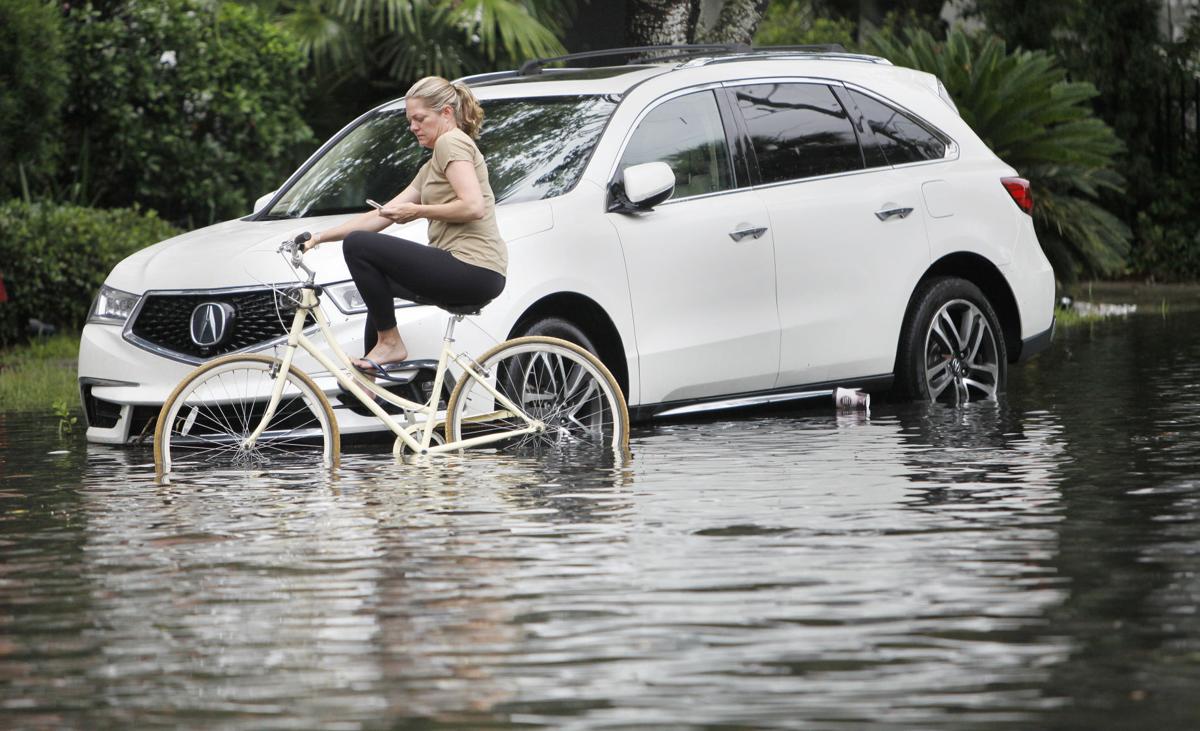 A woman rides her bike through the water that has flooded on Rutledge Avenue Wednesday, June 12, 2019. Mary Alston Herres/Staff 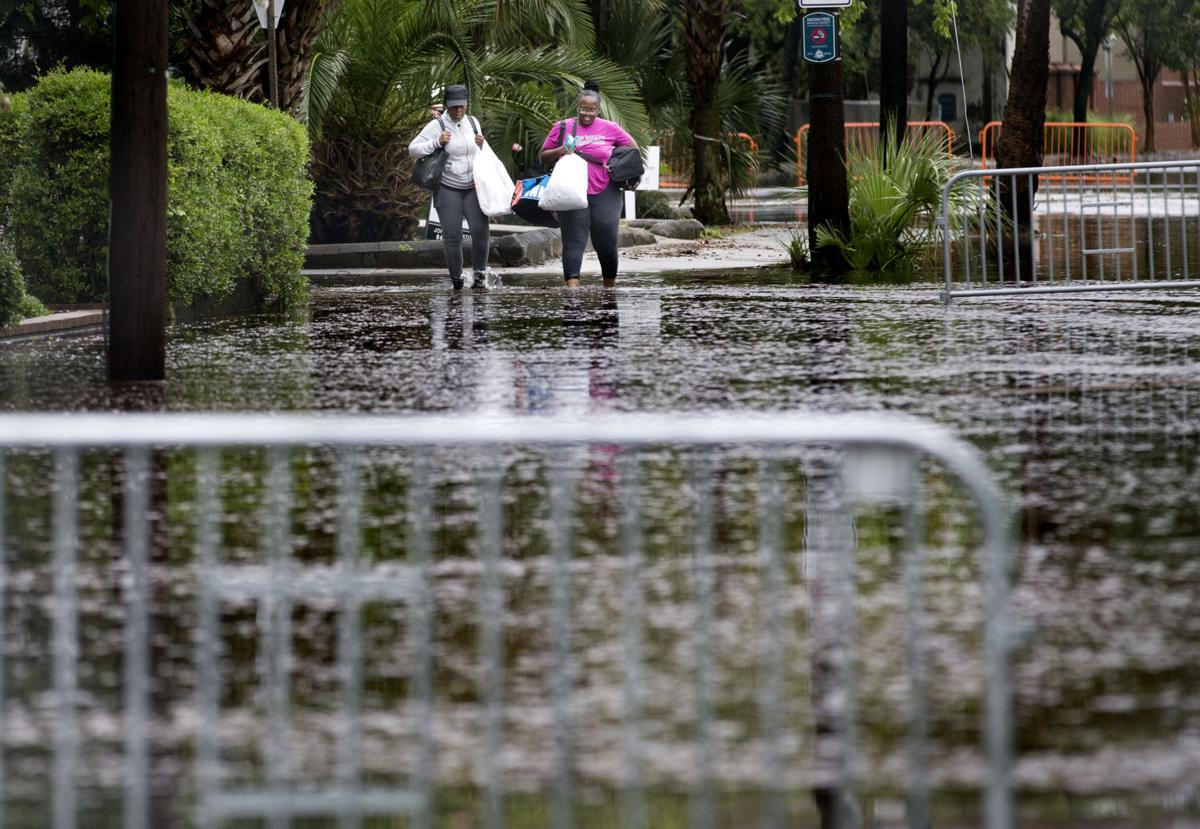 Tanya Benjamin and Kimberly Terrell, of Columbia, wade through the waters on Ashley Avenue as heavy rains flooded streets June 12, 2019, in Charleston. "I've only seen this on TV" said Benjamin who was leaving the hospital after treatment. File/Grace Beahm Alford/Staff 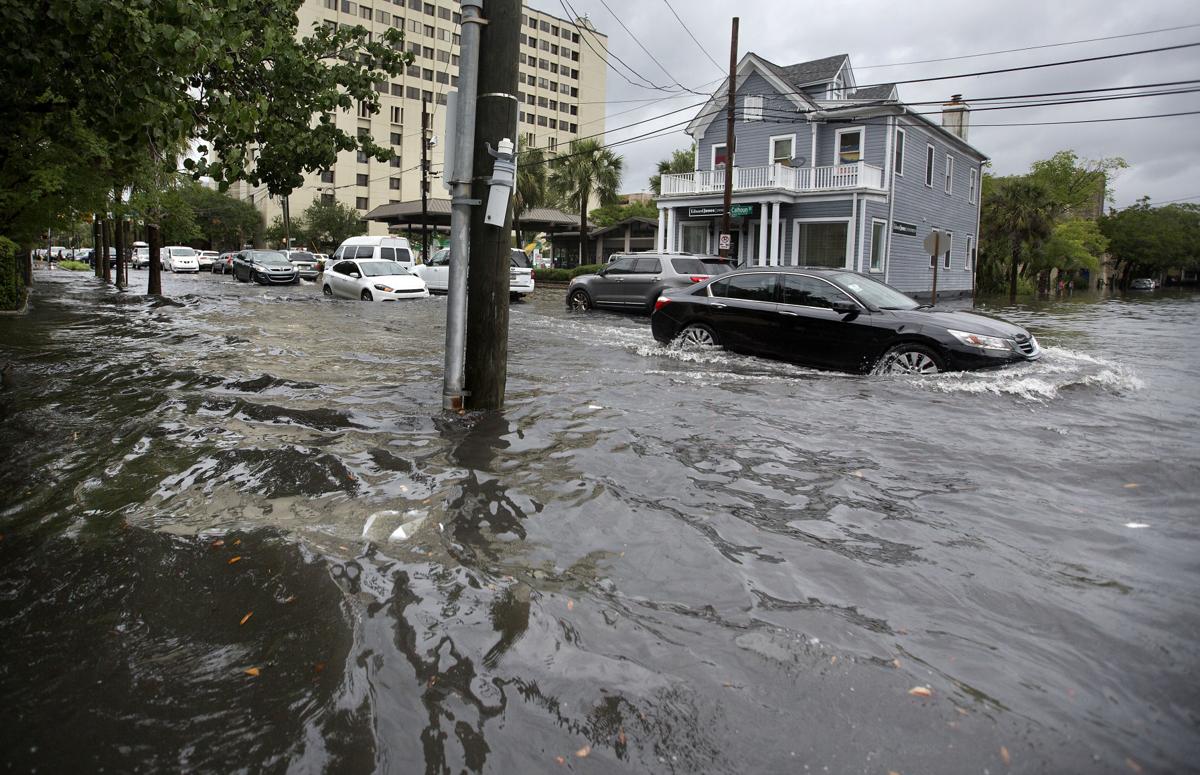 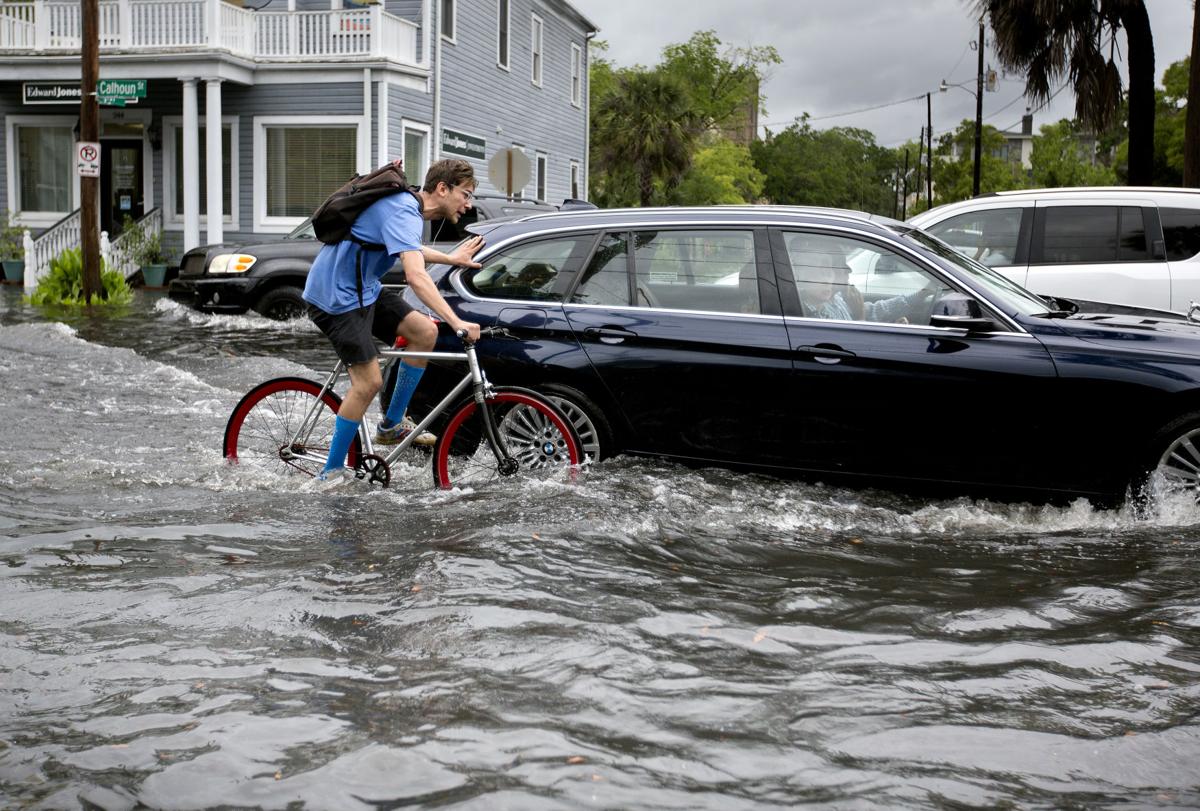 A woman rides her bike through the water that has flooded on Rutledge Avenue Wednesday, June 12, 2019. Mary Alston Herres/Staff

Tanya Benjamin and Kimberly Terrell, of Columbia, wade through the waters on Ashley Avenue as heavy rains flooded streets June 12, 2019, in Charleston. "I've only seen this on TV" said Benjamin who was leaving the hospital after treatment. File/Grace Beahm Alford/Staff

After record-setting rainfall in downtown Charleston, conditions are set to be drier through Saturday.

The Charleston peninsula received 3.82 inches of rain as of early Wednesday night, breaking the record of 1.68 inches set on June 12, 1962, according to the National Weather Service.

More rain was possible but conditions were not expected to be as intense as the torrential downpour seen during daytime hours, said Emily McGraw, a meteorologist with the Weather Service's Charleston office.

The afternoon's heavy rain led to flooding on multiple roads and to early closure of multiple government buildings.

The flooding was particularly remarkable considering it didn't occur at high tide. In past flooding events, problems from rainfall were exacerbated by a high tide, which can block water from draining into the region's rivers.

Earlier in the day, the city of Charleston activated its Public Safety Operation Center in anticipation of potentially dangerous stormy conditions and flash flooding.

Twice each week, Scaff speaks to the National Weather Service about upcoming weather events. Those calls increased this week as predictions of heavy rainfall were expected.

A storm band that passed through the area around 11 a.m. added 3 inches of water on the peninsula, he said. Some cars stalled in the rising water and a tree fell on James Island. No significant injuries were reported and an officer cleared the fallen tree.

Much of the rain was largely the result of a low-pressure system traveling northeast along the coast, according to the National Weather Service.

Climate scientists have documented that as average temperatures around the globe rise, so will the likelihood of intense, drenching rain events. Simply, a warmer atmosphere is able to hold more water.

This provides a challenge to low-lying areas like Charleston and the rest of the Lowcountry. If the rate of rain coming down exceeds the rate at which sewers and drains can evacuate it, flooding ensues. And in many cases, traditional municipal stormwater systems were not built for the amount of rain that's now arriving more frequently.

Charleston is working on a massive tunnel and pump system designed to keep water off of the Crosstown, one of the city's most important downtown thoroughfares, but that project will not be complete until at least 2024.

Flooding subsided through late afternoon and by roughly 5:15 p.m., main thoroughfares into and out of the city had reopened, said Charles Francis, a Charleston Police Department spokesman.

Despite the record-setting rain, 2019 remains a drier than usual year for the Charleston area.

SC got $1B in flood payments, but new data still won't say if your home flooded

About a third of all the federal flood insurance money paid out in SC over four decades was spent in Charleston.

The rest of the week will bring much less storm conditions to the area.

Thursday will see partly sunny conditions with a high of 87 degrees, according to the Weather Service. Nightfall will bring a 20 percent chance of showers and thunderstorms before 11 p.m.

Friday and Saturday are both expected to be sunny with highs in the mid-80s, according to the Weather Service. The forecast does not call for rain until Sunday, when there is a 20 percent chance.

Chloe Johnson and Mikaela Porter contributed to this report.