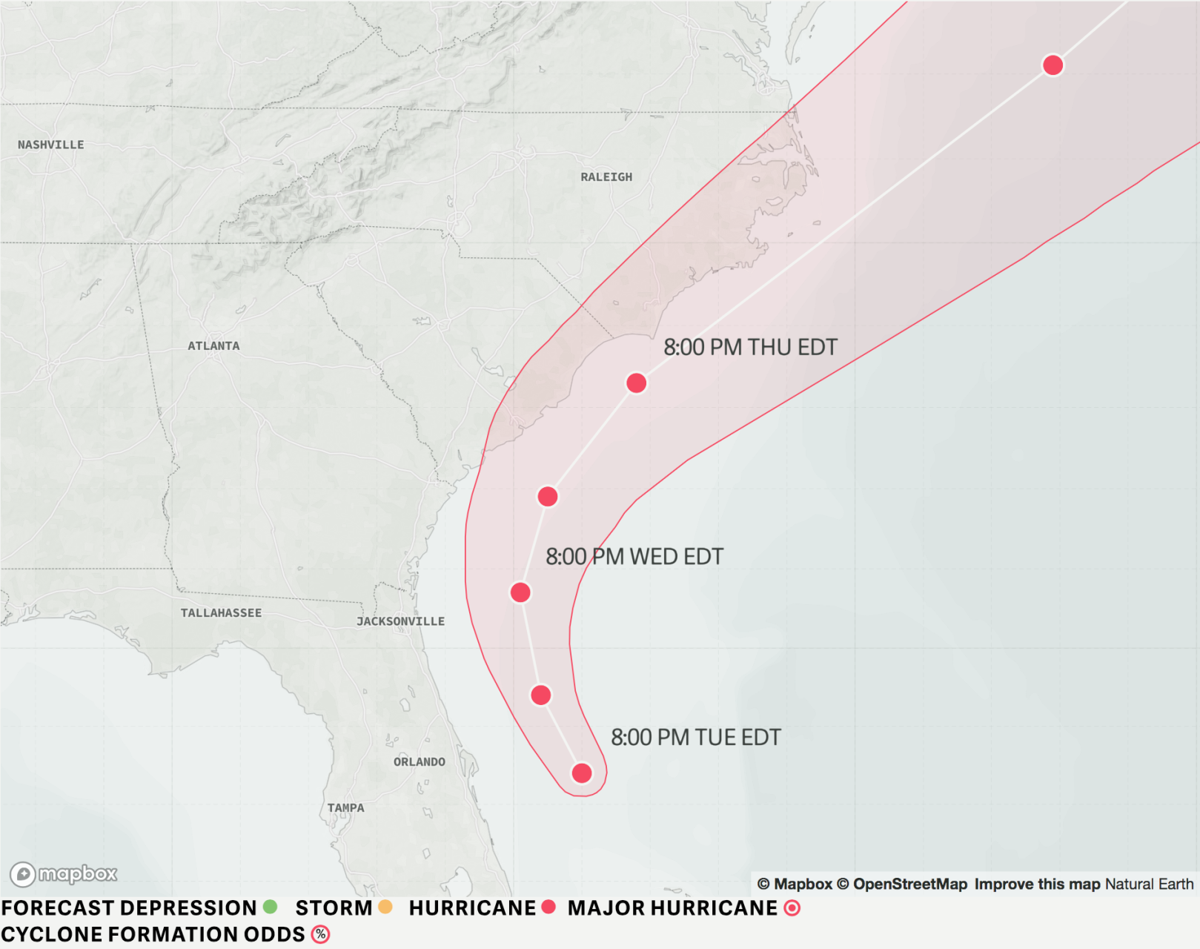 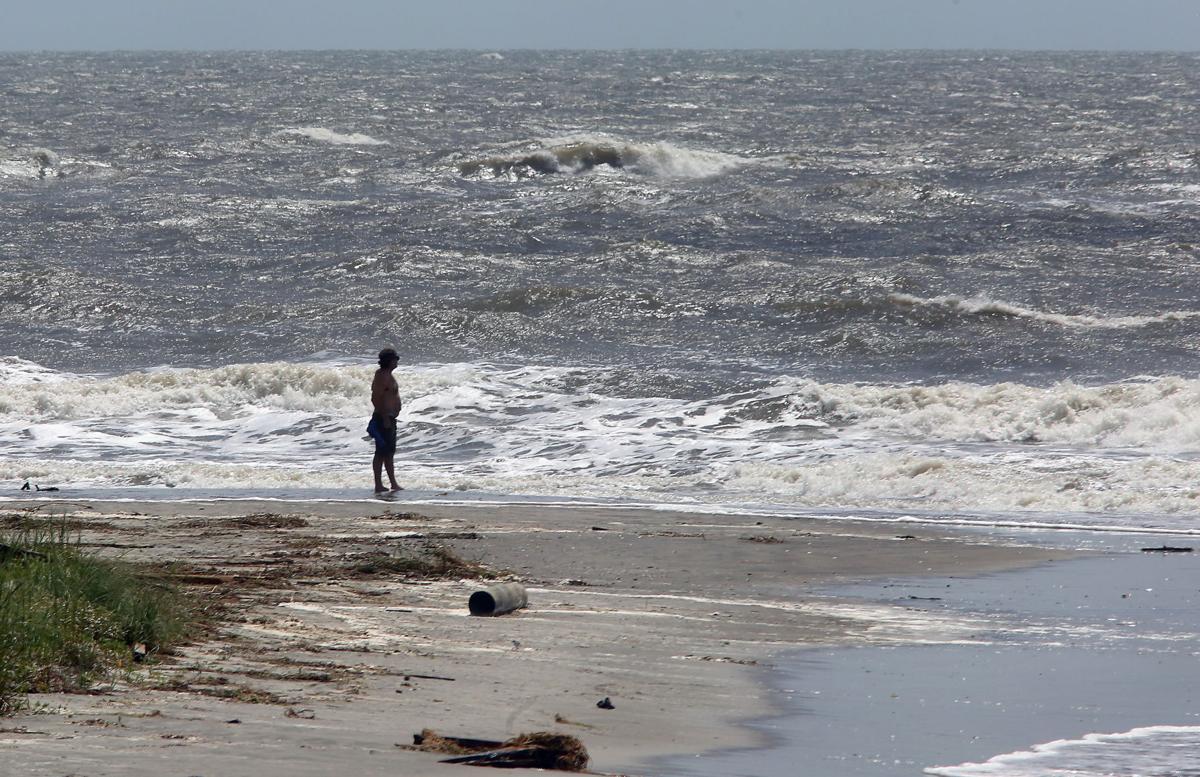 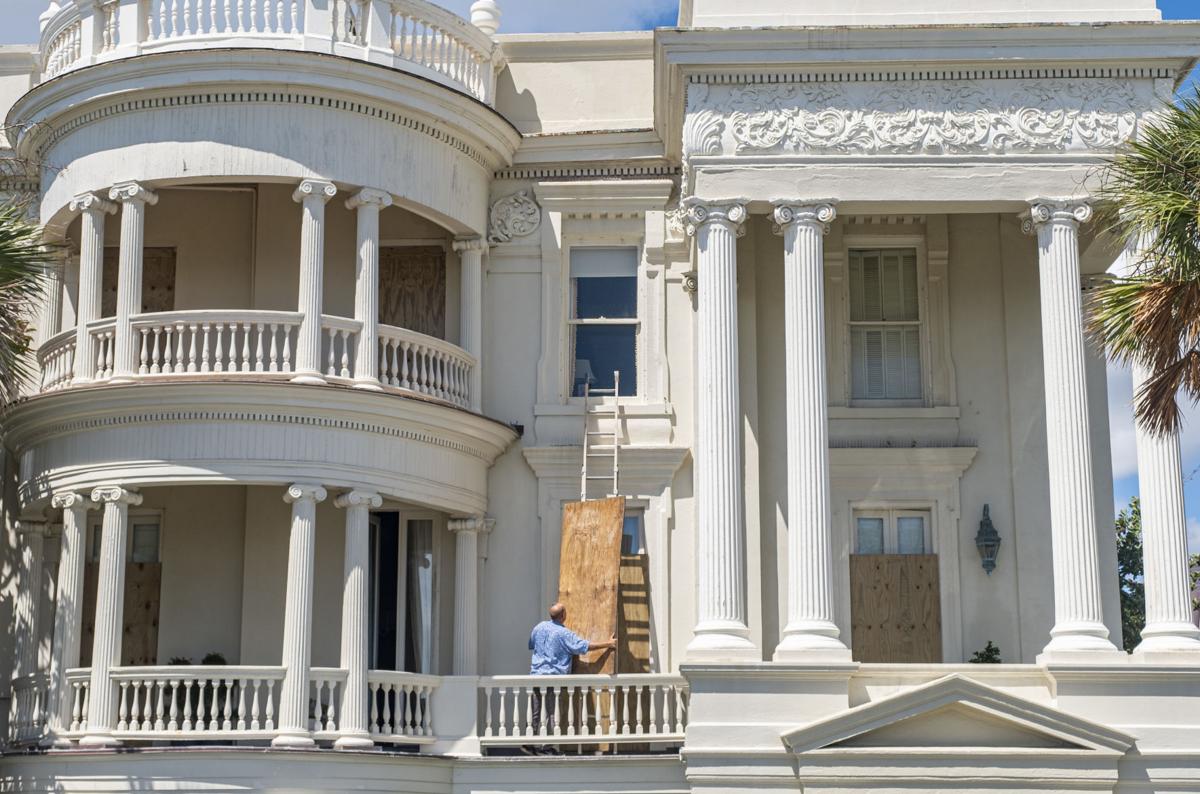 The storm picked up a little more speed Tuesday afternoon, while turning toward its predicted track up the Southeast coast.

At 11 p.m., it was moving 6 mph and expected to keep speeding up. Still blowing winds at 110 mph, it had become a larger storm, with hurricane winds as far as 60 miles from its center and tropical storm force winds of 39 mph or stronger as far as 175 miles.

And National Hurricane Center specialists had nudged its forecast track slightly closer to the coast — within that 60-mile range.

"A track that close to the coast, even if landfall does not occur, is likely to bring dangerous winds, life-threatening storm surge and flooding rains across the eastern portions of the Carolinas," said hurricane center specialist Daniel Brown.

Gov. Henry McMaster ordered a mandatory evacuation of Charleston and surrounding areas that went into effect Monday. Late Tuesday, the S.C. Emergency Management Division cautioned residents who have not yet left.

"Residents in designated evacuation zones must leave no later than Wednesday morning to reach a safe distance from Hurricane Dorian," the agency said in a news release.

The lane reversals on Interstate 26 will end at noon Wednesday, but it may take four hours to reopen eastbound lanes, according to the S.C. Department of Public Safety.

The EMD also warned that travel may not be possible on many high-level coastal bridges, including the Ravenel and I-526 bridges, because of expected winds.

Dorian is expected to arrive Thursday morning off South Carolina. The Charleston area should begin to see tropical storm winds and rain on Wednesday, likely in the evening, as well as the first of the bands of heavy rain circulating from the storm.

The hurricane is expected to keep blowing winds near 110 mph as it moves off South Carolina and weaken as it passes.

Charleston-based meteorologist Shea Gibson, with the forecasting company WeatherFlow, said the barrier islands could see sustained hurricane winds of 74 mph or stronger, and gusts up to 110 mph. Inland, the Lowcountry could see sustained winds anywhere from 40 to 70 mph with gusts from 90 to 100 mph.

Storm surge and flood tides started to emerge as the worst threats for the South Carolina coast, although heavy rain and winds are still expected. Folly Beach was expecting storm surge of more than 4 feet above the tide line, high enough to overrun dunes and flood low-lying areas, particularly along the backside marsh of the island.

“If you live in a residence that flooded over the last four years between the 2015 storm, Matthew, Irma — any of those storms, you should evacuate your residence and move to higher ground and stay out of harm's way,” Tecklenburg said. “We want everyone to be safe.”

Police Chief Luther Reynolds said over 10 feet of tides are expected: “This is not the time to relax.”

Charleston is also likely to see record tides starting Wednesday, further complicating Dorian's impact. At over 9 feet, the tide Wednesday afternoon at the Charleston Harbor would roughly match high points seen during Hurricane Matthew in 2016, and would be among the 10 highest tides on record. It could reach higher than 10 feet at 2 a.m. Thursday, the National Weather Service said.

Official forecasters expect 5 to 10 inches of rain in the Carolinas through Friday, with moderate risk of excessive rainfall also beginning Wednesday.

According to the map, nearly all of Sullivan's Island and large parts of Folly Beach and Isle of Palms could be under water.

"While Dorian’s weakening is welcome news, it has come with an expansion of the hurricane’s wind field, which is unwelcome news for the Southeast U.S. coast," said meteorologist Jeff Masters, of the Weather Underground. Tropical storm force winds, or winds of at least 39 mph, could extend three times as far as the hurricane winds.

"Even so, tropical-storm-force winds are likely to affect the entire coast from central Florida northward, and such winds can bring down trees and power lines," he said. "Overall, storm surge damages from Dorian in the Southeast U.S. are likely to be roughly similar to those of Hurricane Matthew, amounting to at least $1 billion."

As usual, storm surge poses among the greatest threats to the South Carolina coast. The Hurricane Center is predicting Georgia and South Carolina will see the greatest surges, between 4 and 7 feet. Tropical force winds have a good chance of reaching the Midlands as well. Tornadoes are also possible on Wednesday and into Thursday.

As it devastated the Bahamas on Monday and into Tuesday, Dorian was losing wind speed, falling from 140 mph at 8 p.m. Monday night to 120 mph early Tuesday morning.

A statewide burn ban will begin at 7 a.m. Wednesday until further notice, according to the S.C. Forestry Commission. With high wind gusts expected and many firefighters being dedicated to coastal storm response, the ban is intended to reduce the possibility of wildfires and the strain on state and local firefighters.

On Tuesday morning, Keenen Smith was one of a few residents preparing sandbags in a neighborhood near East Bay Street and the Ravenel Bridge. Smith and his family have lived in Charleston for about two years, and even spent Hurricane Irma at a local hospital when Smith's son was born. They left for Florence last year.

His plan is to keep an eye on the news and stack his family's belongings on couches and beds.

Sonja Taylor, a Lowcountry native living in Mount Pleasant, said she stayed through Hurricanes Floyd and Andrew. She found the grocery stores were already out of bread by Saturday.

On Folly Beach, residents enjoyed a mostly clear day in the sunshine before hunkering down for the storm. Many were cautiously optimistic about the storm's impact and said they'd taken precautions should the worst happen.

But Tuesday night was a time to let loose, one last evening of relaxation before Dorian's impact. A band played at The Washout, a popular bar, as patrons ordered drinks, and chatted among each other about hurricane preparations and their expectations of the storm.

Nadine Rollins, a resident of the barrier island for 17 years, said she and her husband bought a generator and have stocked up on essential supplies.

She and her husband evacuated in 2016 ahead of Hurricane Matthew, which flooded their basement but did not damage the rest of their home. This time, the couple decided to ride out the storm.

"I'm sure we'll lose power," Rollins said. "But we've got a generator. I'd just as soon be here for the mess and know what I'm dealing with."

Roger Rutledge, a resident of eight years, said he planned to stay on the island and check on his friends' and neighbors' property.

"Folly is family," Rutledge said. "We look after everybody."

How to evacuate on reversed SC highways ahead of Hurricane Dorian

Mikaela Porter and Gregory Yee contributed to this report.

Photos: The Lowcountry prepares and waits for Hurricane Dorian

The Lowcountry prepared and waited Tuesday for the approaching Hurricane Dorian. Area residents will begin to feel the effects of Dorian start…