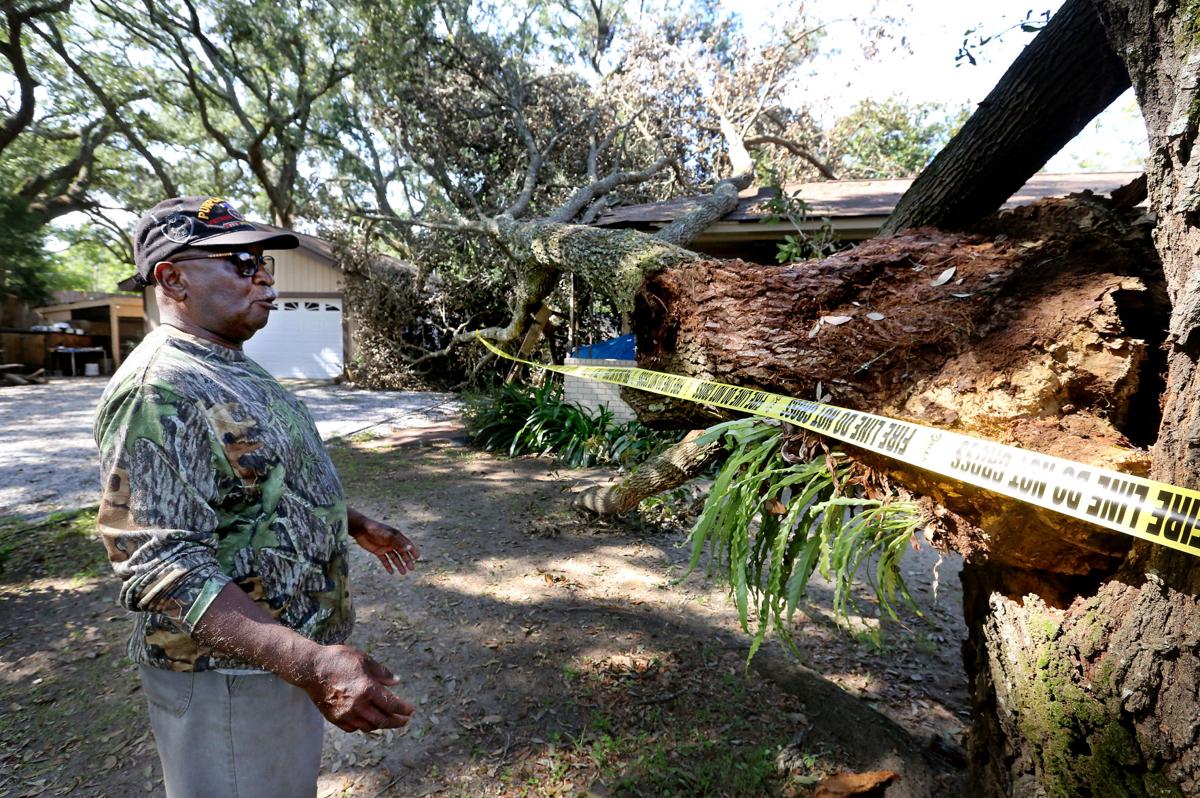 Ronald Middleton Sr. explains how a portion of a tree snapped off and fell on his house on Fortune Lane on James Island during Hurricane Dorian on Thursday, September 12, 2019.  If the eye of Hurricane Dorian had jogged 20 miles closer to land, some of the worst of its winds would have roared ashore and blasted longer. File/Brad Nettles/Staff 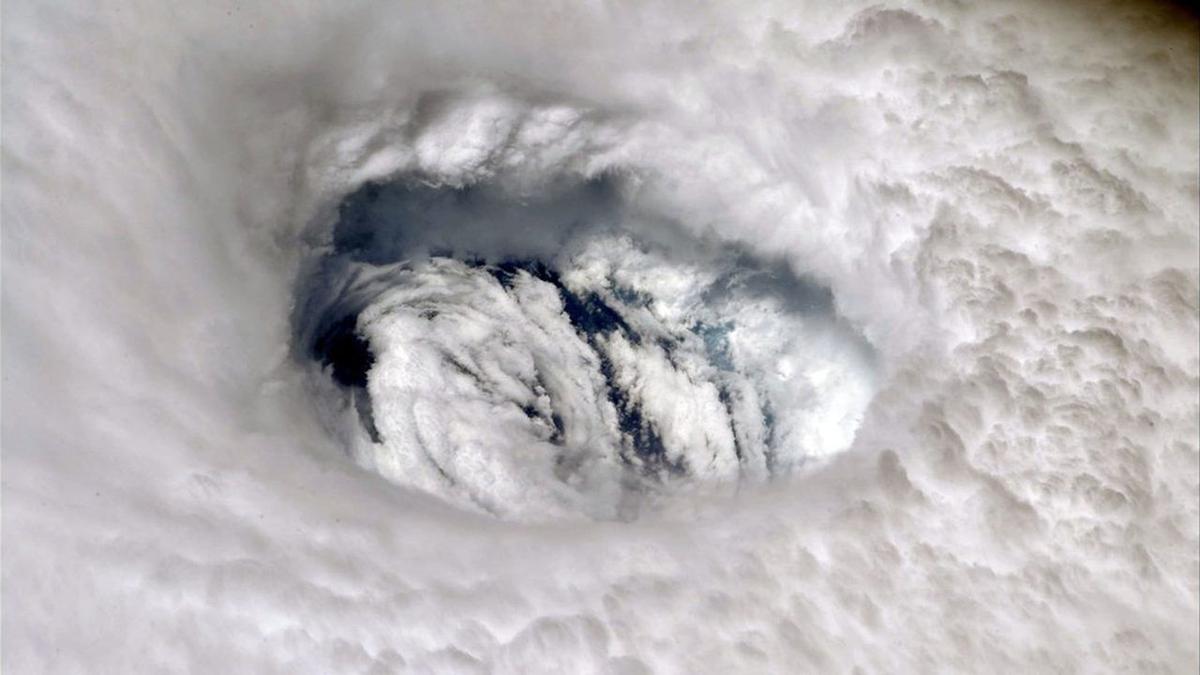 The eye of Hurricane Dorian evolved to a Category 5 hurricane. Shown from the International Space Station. File/NASA/AP 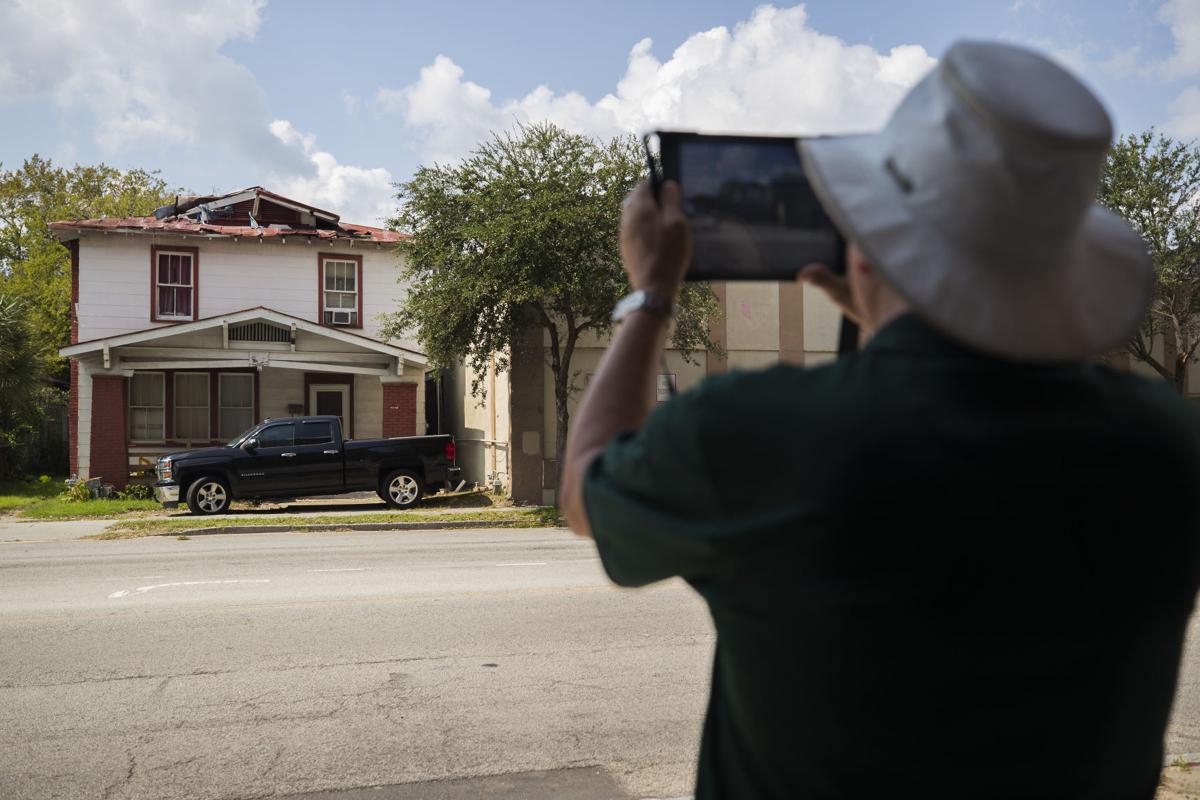 Gary Pope, inspections supervisor for Charleston, takes a picture of a house that was damaged during Hurricane Dorian on Tuesday, Sept. 10, 2019, in downtown Charleston. File/Lauren Petracca/Staff

Twenty miles — that was the difference for the South Carolina coast in getting a brush-by hurricane season or a fifth straight year of wreckage.

If the eye of Hurricane Dorian in September had jogged 20 miles closer to land — where little more than a day earlier it was predicted to travel — some of the worst of its winds would have roared ashore and blasted longer.

The storm surge would have flooded low areas.

That's maybe the biggest takeaway from a season that left a lot of people relieved when maybe they should be even more worried about things to come.

The worst of this year's storms moved up through the mid-Atlantic Ocean. But a shift in steering winds would have brought them onto the Southeast coast. That trend of stronger storms farther north won't go away anytime soon and more will be seen in the future.

That's a riskier prospect for South Carolina and the East Coast as a whole.

The Atlantic hurricane season officially closes Nov. 30, but for the Southeast coast it's as good as done.

"The pattern is looking much more winter-like across the central and eastern U.S. this month, with strong upper-level winds that are likely to suppress or divert any tropical systems," said meteorologist Bob Henson, with the forecasting company Weather Underground.

"November does produce a named storm every couple of years on average, but these tend to form well away from U.S. shores and don't tend to be strong or long-lasting," Henson said.

The eye of Dorian passed within 50 miles of Charleston on Sept. 5. The eyewall, with winds of more than 100 mph, was at least 45 miles wide.

"If it had come 20 miles farther into the coast, we would have sustained additional damages and many more power outages across the tri-county areas and farther inland," he said. "We also would likely have had a verifying storm surge of 6 to 8 feet with winds."

Joe Coates, a senior specialist Charleston County Emergency Management, agreed. He watched the satellite and radar feeds in the emergency operations center as the storm closed in, monitoring the social media and dispatch calls for trouble.

"It was stressful. The biggest fear is we're going to have fatalities," he said. "Twenty miles closer and we would have gotten a whole lot more significant damage than we did. And the closer the eyewall gets, the higher probability of tornadoes."

Dorian was one of 11 tropical cyclone storms that whirled up the Atlantic this year, compared to six in the Caribbean or Gulf of Mexico. Pablo, in late October, shocked meteorologists by becoming a hurricane off the Azores, farther north in latitude than New York City, then remaining a powerful storm as it moved north.

It was one of four hurricanes — including Dorian — to hold that strength in "cooler" Atlantic waters, well out of the tropics.

Warming seas are moving the formation, tracking and strength of Atlantic storms farther north, according to recent studies. The number of days that a "major" or potentially devastating hurricane will affect South Carolina is expected to double in the next 60 to 100 years.

"The higher the latitude of stronger storms, the more risk we will begin to take on for near-misses or landfalling tropical cyclones. Sea-level rise is also contributing to additional and, in many cases, pre-existing flooding," he said.