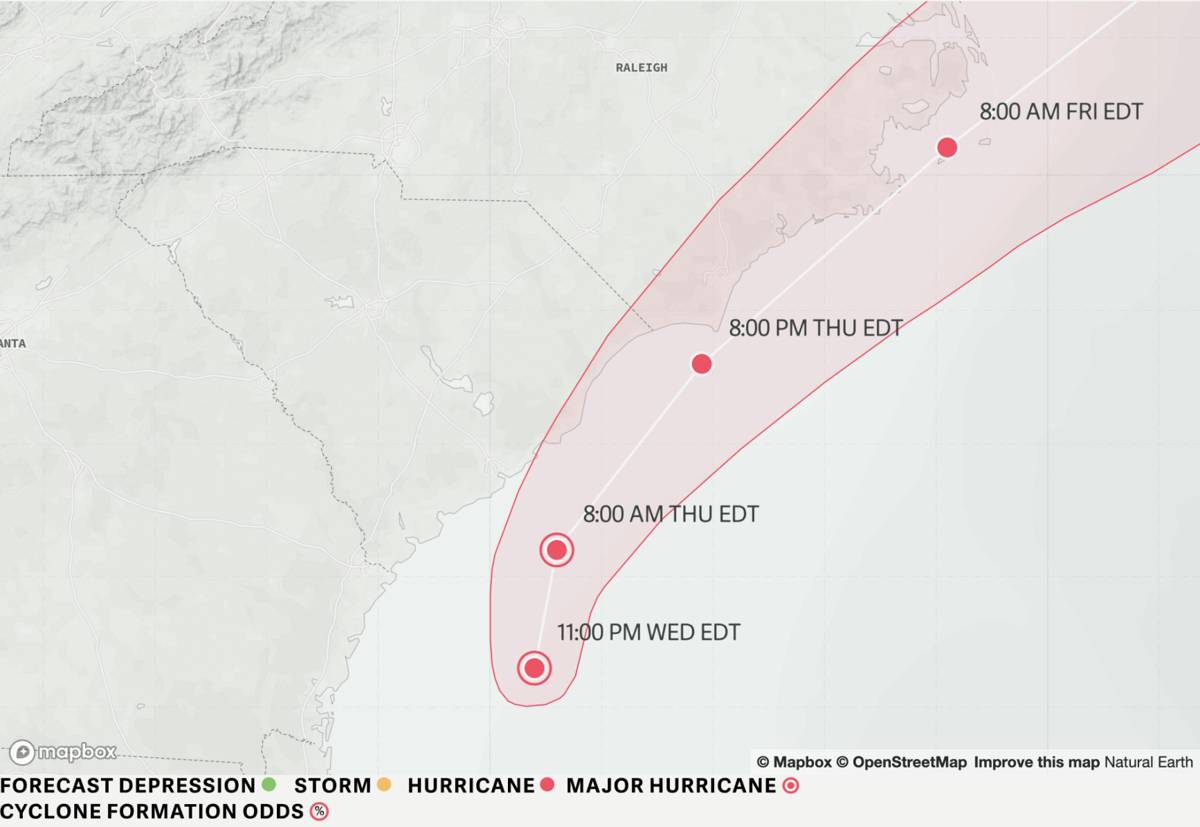 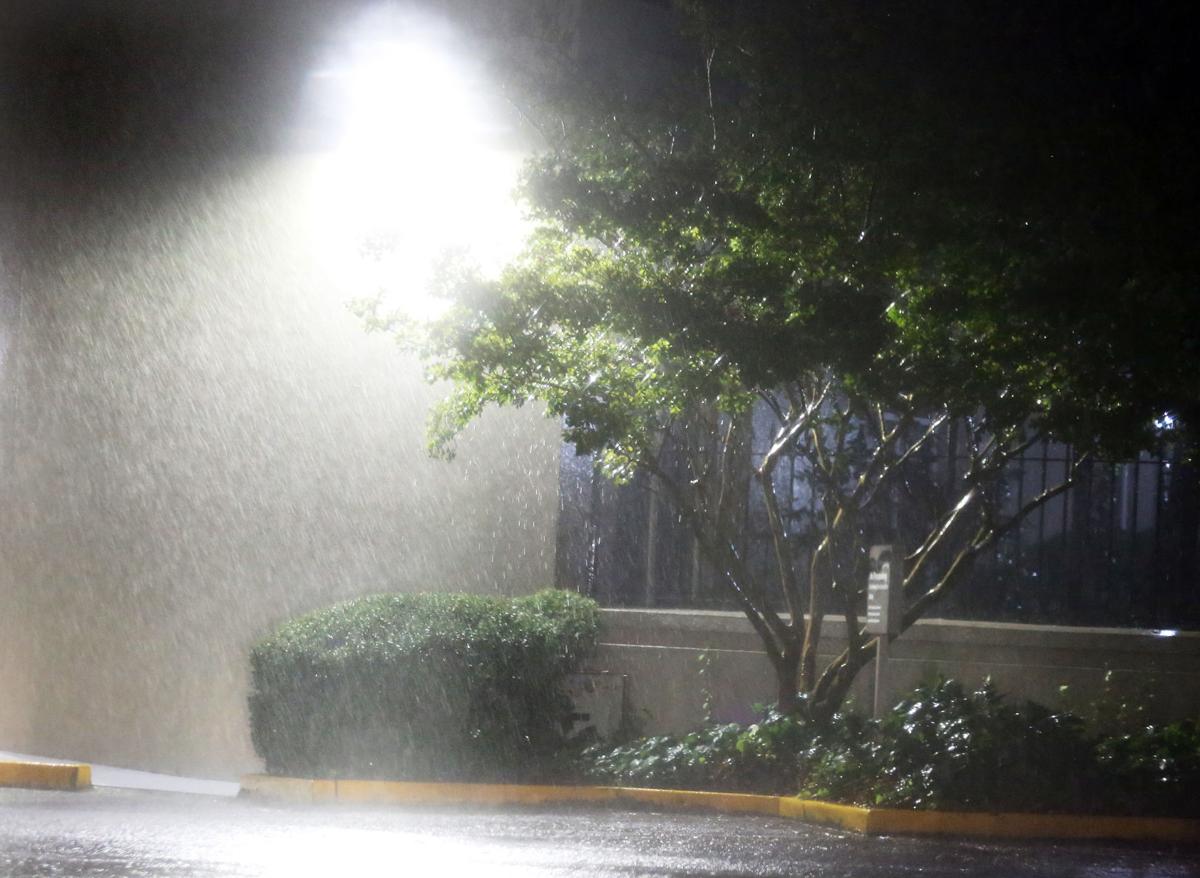 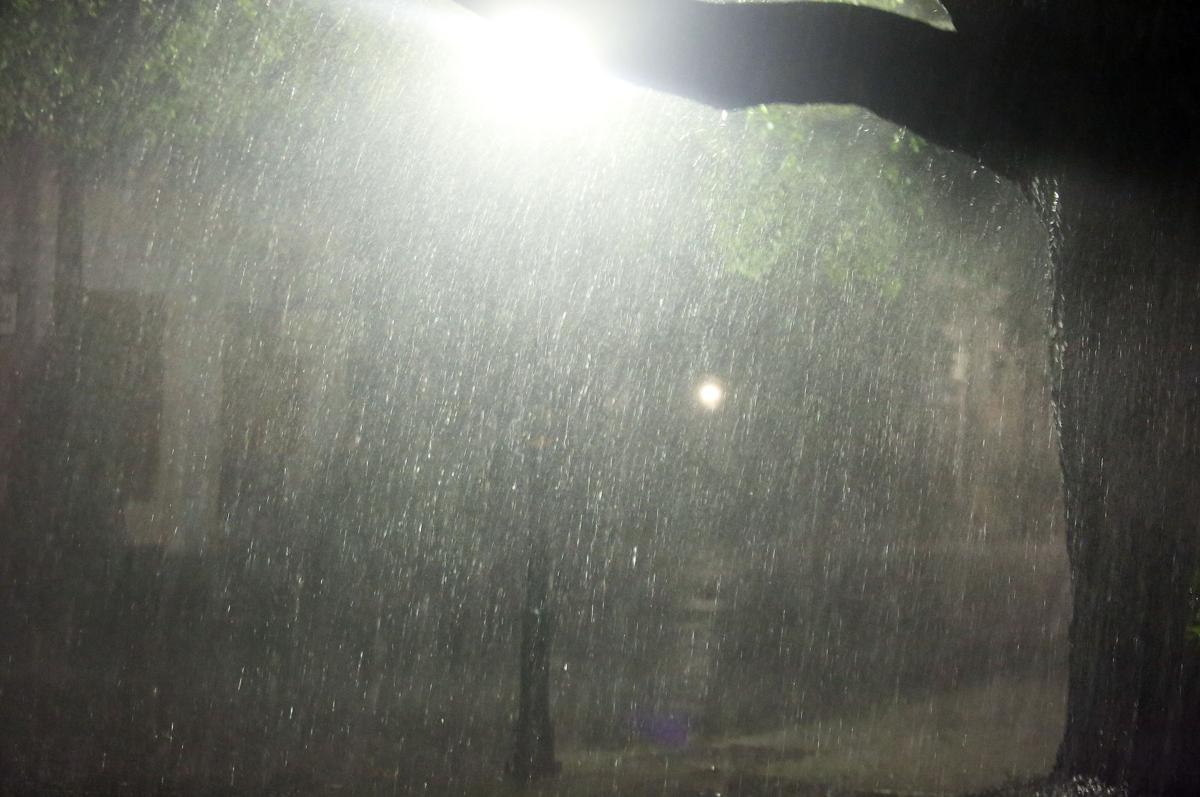 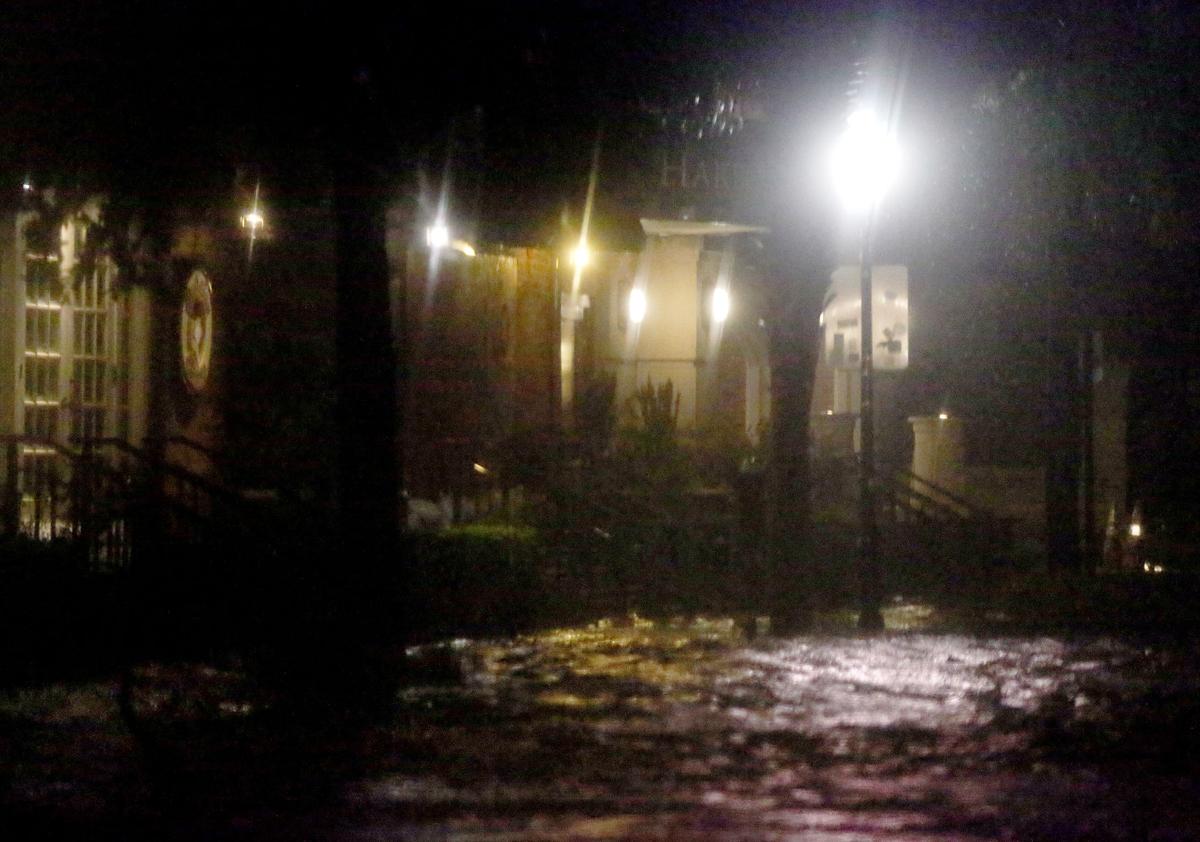 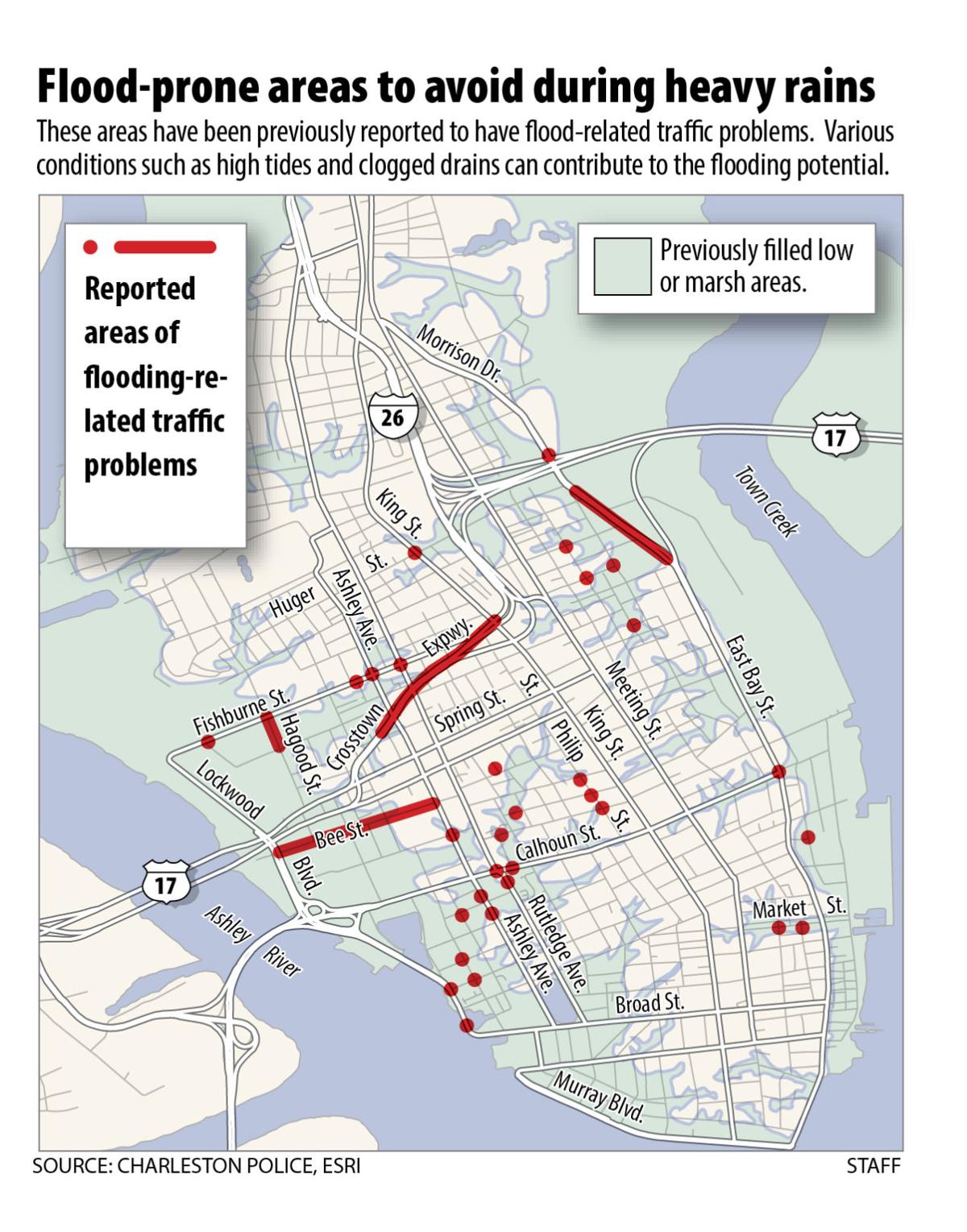 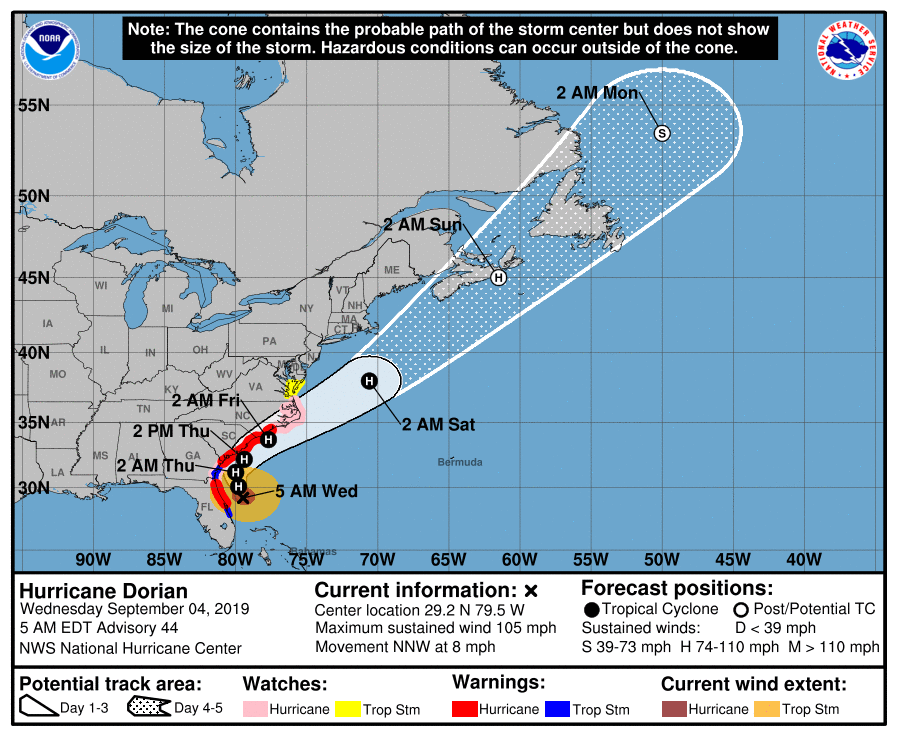 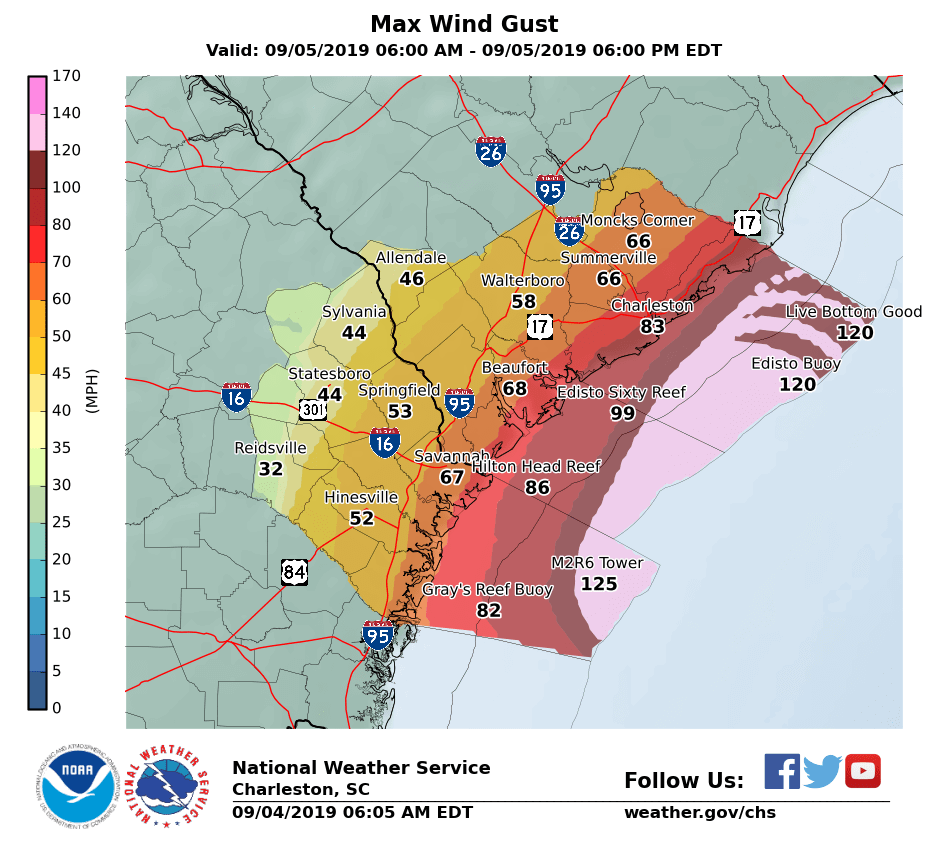 Expected wind gusts to be felt around different regions of coastal South Carolina and Georgia as Hurricane Dorian approaches. (NOAA) 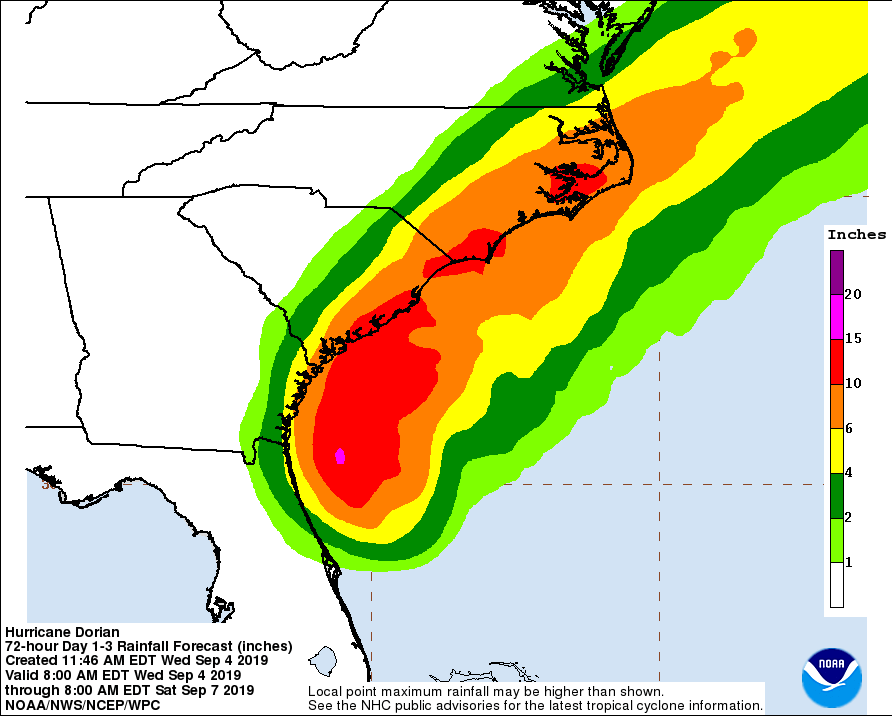 This graphic shows rainfall potential for the United States when a tropical cyclone threatens land. (NOAA)

It was a Category 3 storm, and had maintained its speed of 7 mph.

"Dorian could maintain this intensity for about 12 hours or so, but guidance is showing shear increasing, and that should result in gradual weakening," said National Hurricane Center specialist Lixion Avila at 11 p.m. Wednesday.

Dorian remained a large storm, about the size of South Carolina. Hurricane winds whirled as far as 60 miles out from the center of the storm, and tropical storm force winds had expanded to 195 miles out.

It was predicted to still have those winds by the time it reaches Charleston mid-day Thursday but could weaken then. Hurricane force winds were expected to start reaching the coast before sunrise, said the National Weather Service office in Charleston.

Dorian was moving north. It had begun a predicted slow turn to the northeast hoped to keep it from making landfall. The farther it gets off the South Carolina coast, the less damage the coast could see.

A Category 3 storm is considered capable of knocking out electric power and water, pulling off roofs and seriously damaging homes. The strengthening was not unexpected, but it means the storm could pass South Carolina with slightly stronger winds than expected earlier.

Center specialists earlier nudged its forecast track slightly farther offshore, after computer models indicated that would happen. Charleston was now on the far western edge of the zone of potential landfalls. On its current track, the center of the storm would pass about 40 miles off Charleston.

Around 1:50 a.m., authorities warned that wind speeds in the Charleston area had reached sustained speeds of 30 mph and that high-profile vehicles should not travel on bridges 65-feet or higher, or travel on any exposed bridges, according to Charleston County officials.

When winds reach sustained speeds of 40 mph, bridges are set to "condition red," which means that spans of 65-feet or higher and exposed bridges are unsafe for any vehicle to travel on, officials said.

Anyone who drives on a bridge against a code red advisory "is doing so at their own risk," officials said.

By 8 p.m., rain had moved in across the state's coast and wind reports were 40 mph or stronger. At 11 p.m., both Edisto and Folly beaches reported 56 mph winds and 8-foot-high waves.

Forecasters predicted an high tide of 10.1 feet in Charleston at 2 a.m. Streets flood at 7 feet.

On the beaches, the surge that could be higher than 6 feet in spots, particularly north of Charleston. That's high enough to overrun dunes.

"All else being equal, that produces less surge than a hurricane striking the coast at a right angle, such as Ike and Sandy. Even so, as we saw with Matthew in 2016, a large, coast-hugging Southeast U.S. hurricane can produce a major, destructive storm surge," he said.

The storm is anticipated to stay off the South Carolina coast, which means most of its strongest winds should stay out to sea.

The storm is predicted to make its closest approach to the Lowcountry coast — and blow onshore the hardest — as it passes Charleston and Berkeley counties.

The National Weather Service office in North Charleston called for winds 90 mph or stronger along the coast and stronger than 60 inland as far as Summerville and Moncks Corner.

There's also the danger of "spur" or wrap-around winds, gusts kicking up stronger out of the west as Dorian passes.

"The winds can be punchier coming from inland. Those northwest winds can really jack it up," said meteorologist Shea Gibson, with the forecasting company Weather Underground.

The morning skies had been still early Wednesday, but then a band moved through at about 9 a.m.

In Mount Pleasant, residents ventured out after a downpour, lining up at a Chic-fil-A drive-thru and squeezing in a jog or a walk.

“We’re bored,” said Betty Cross, explaining why she and her adult daughter Michelle Flowers were strolling the Pitt Street park at 11 a.m. “We’re both active people and don’t like to be cooped up.”

Flooding is the town’s primary concern, Mount Pleasant Emergency Manager Amanda Knight said. She was at the town’s Emergency Operations Center in a Town Hall.

“We have high-water vehicles pre-positioned around the town,” she said. “If you can avoid being on the roads, don’t be on the roads.”

Tens of thousands of coastal residents in Florida, Georgia and South Carolina had already evacuated, but many also decided to ride it out.

Closer to Charleston, Berkeley County sheriff’s deputies and Cainhoy firefighters were going door to door in Huger along French Quarter Creek, urging residents to leave now. The area is prone to extreme flooding.

So is downtown Charleston. A Hurricane Center map that analyzes potential storm surges showed that large areas of the peninsula would see 3 feet of water. The map also shows many parts of Sullivan's Island, Folly Beach and Isle of Palms could be under water.

In North Charleston, many residents have grown accustomed to flooding since the implementation of the nearby Palmetto Commerce Parkway.

“It always floods here now,” said Don James, 61, as he took a break from laying sandbags around his parents’ two-story home. James said his parents lost three cars and many household items when their two-story home on Peppercorn Lane was damaged by flood waters several years ago. He’s concerned that the creek behind the home could cause some damage this week.

It wasn't too late to get in a round of golf, though.

David Aanderud and John Kenna headed out to the city's municipal golf course during a break in the bands. They said it's one of their hurricane traditions, and they don’t keep score.

Kenna, standing near Hole 17, said his neighbor’s house often floods, but his home is usually safe. Both Kenna and Aanderud said they become more concerned when the winds pick up speed. “We’re the kind of people who wait and see if it’s going to come close.”

As the storm closed in Wednesday, streets began to empty.

Across the state 22 emergency shelters had opened by Wednesday afternoon, including four for people with meidcal needs. The shelters overall were housing a few more than 1,700 people, about 9 percent of their capacity.

Emergency services will be pulled off the road as tropical storm force winds arrive. Dorchester County planned to pull public safety patrols too, as will Berkeley County and most if not all other public safety patrols. They will respond to calls as long as it is safe to do it.

The traffic control tower at Charleston International Airport was scheduled to shut down at 3 p.m. Wednesday, effectively closing the airport. Operations were expected to resume Friday morning, depending on weather.

"We strongly recommend that passengers stay in direct contact with their airlines for up to date information on flight operations and cancellations," the airport reported.

After lane reversals on Interstate 26, it will take four hours to reopen eastbound lanes, according to the S.C. Department of Public Safety.

State officials also warned that travel may not be possible on many high-level coastal bridges, including the Ravenel and I-526 bridges, because of expected winds.

When Hurricane Dorian leaves, the Lowcountry will see sunny hot weather for the weekend. Highs will be from 90 to 95 degrees away from the coast and 85 to 90 closer to the coast Friday through Sunday.

Things you need to know as Hurricane Dorian approaches SC

No more flights at Charleston airport due to Hurricane Dorian