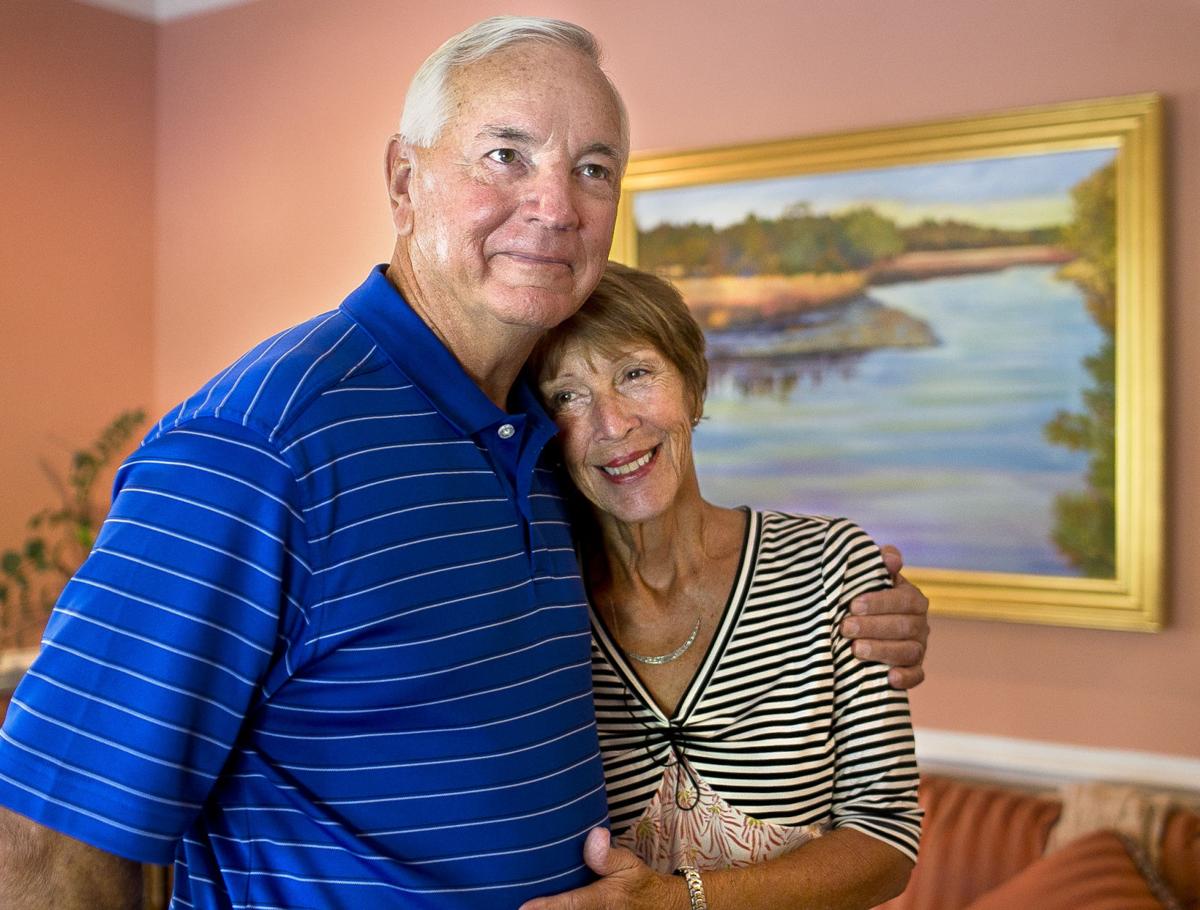 "We were with each other. We were at peace with ourselves." O.L. Thompson said, embracing his wife Toni Thompson while discussing how they rode out Hurricane Dorian in their home on Elbow Cay, an island of the Bahamas. The two were in Hanahan when Hurricane Hugo struck the coast of South Carolina in 1989 and they decided to stay where they were as the last flight left Great Abaco Island. Andrew J. Whitaker/Staff 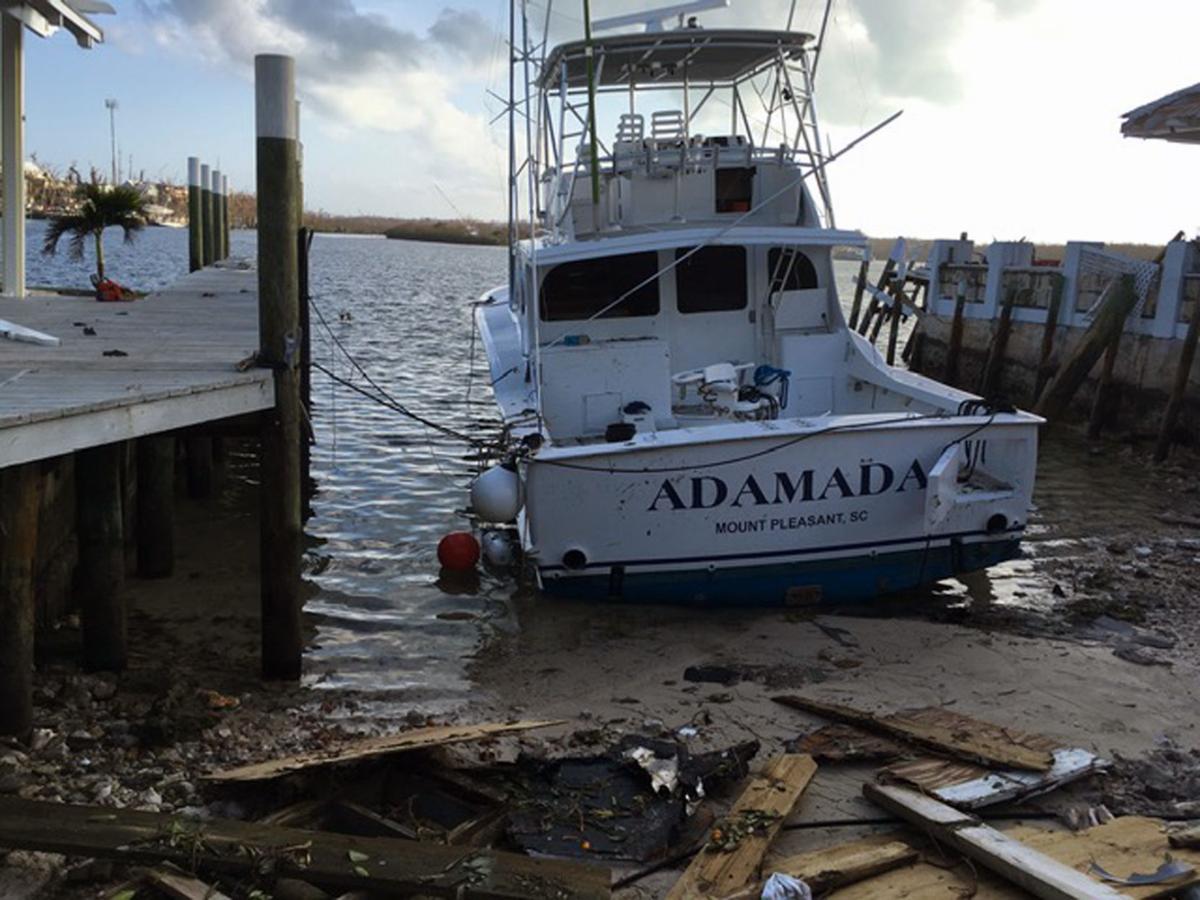 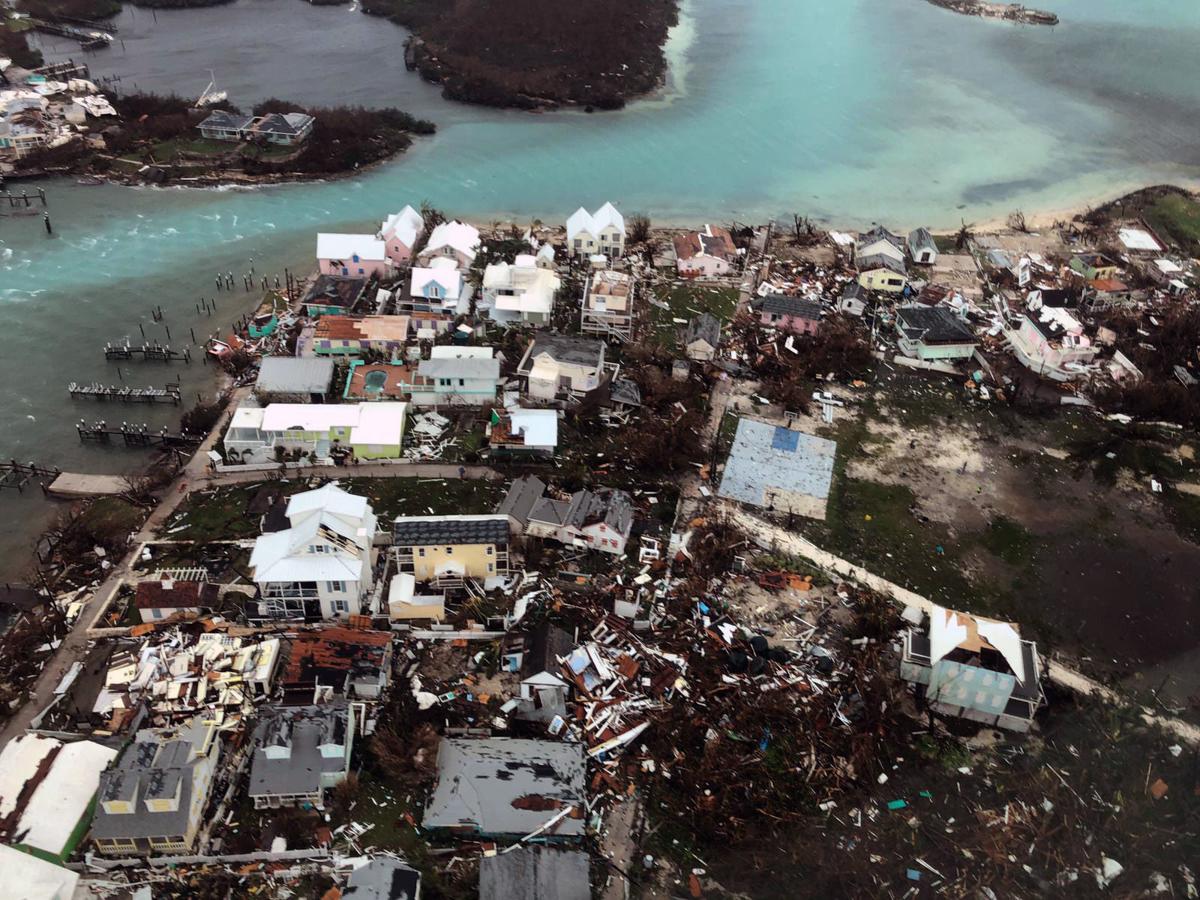 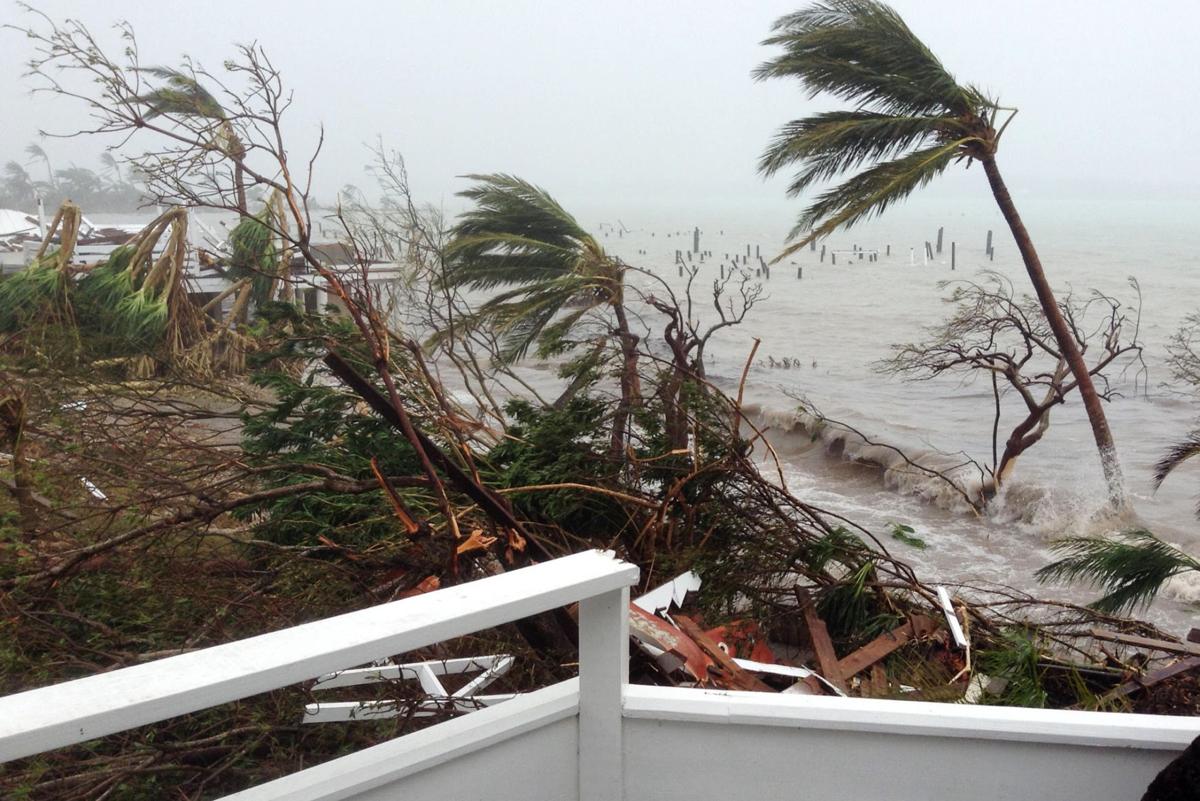 A view from O.L. and Toni Thompson's home in Elbow Cay during Hurricane Dorian in the Bahamas. Provided/O.L. Thompson 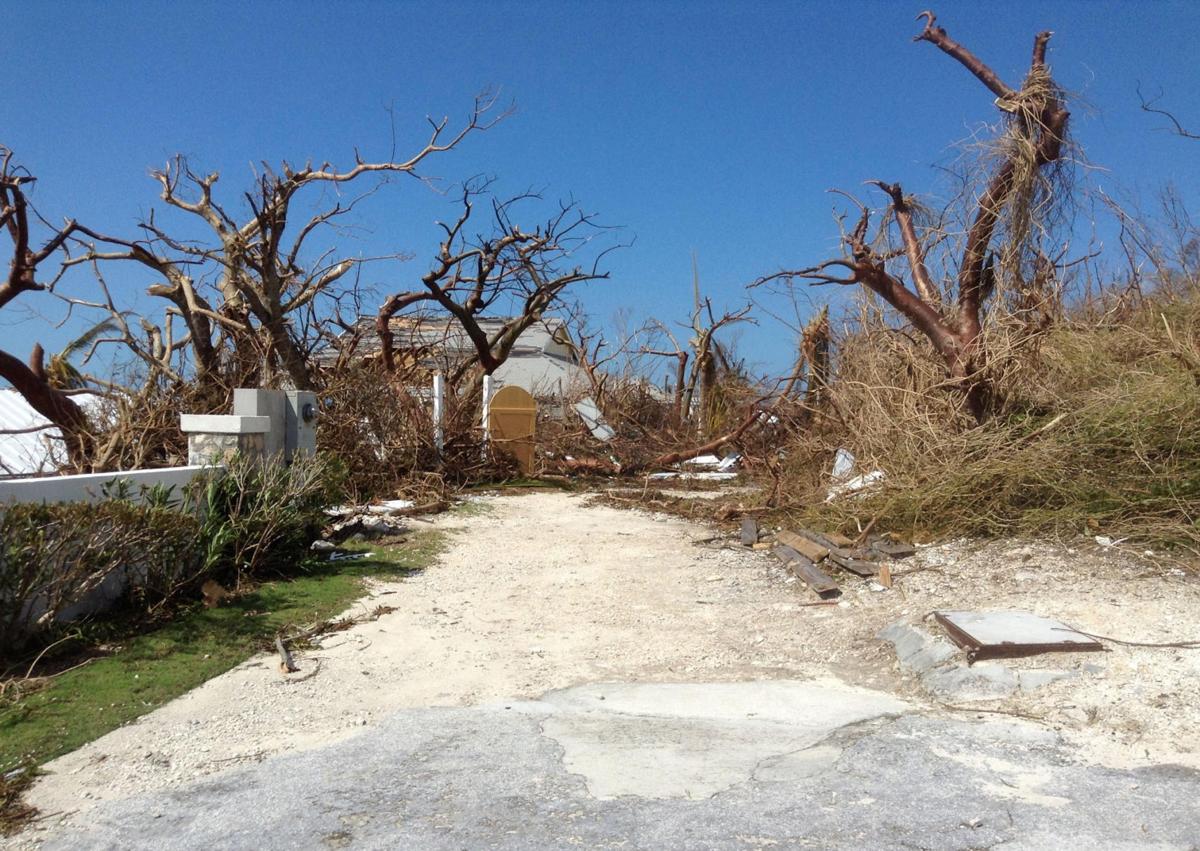 A view on Elbow Cay after Hurricane Dorian struck the Bahamas. Provided/O.L. Thompson 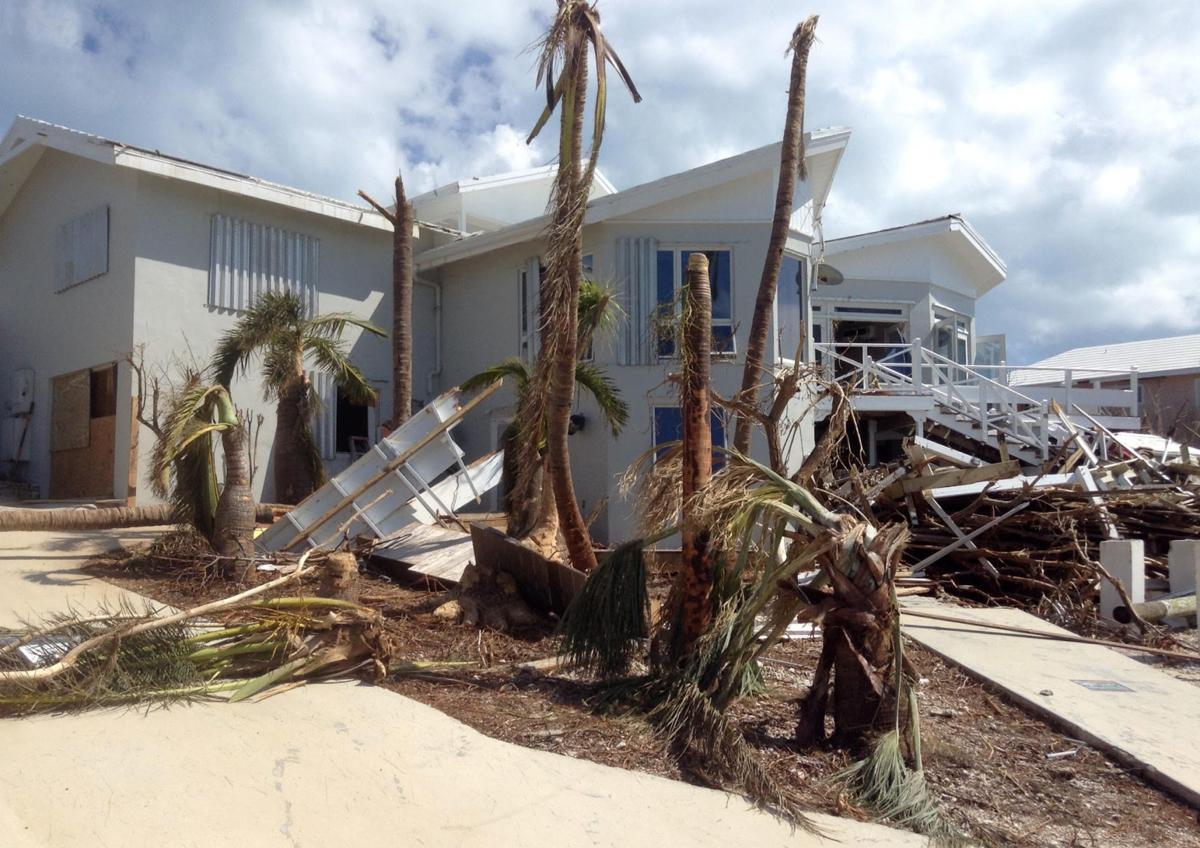 A view from O.L. and Toni Thompson's home in Elbow Cay after Hurricane Dorian struck the Bahamas. Provided/O.L. Thompson 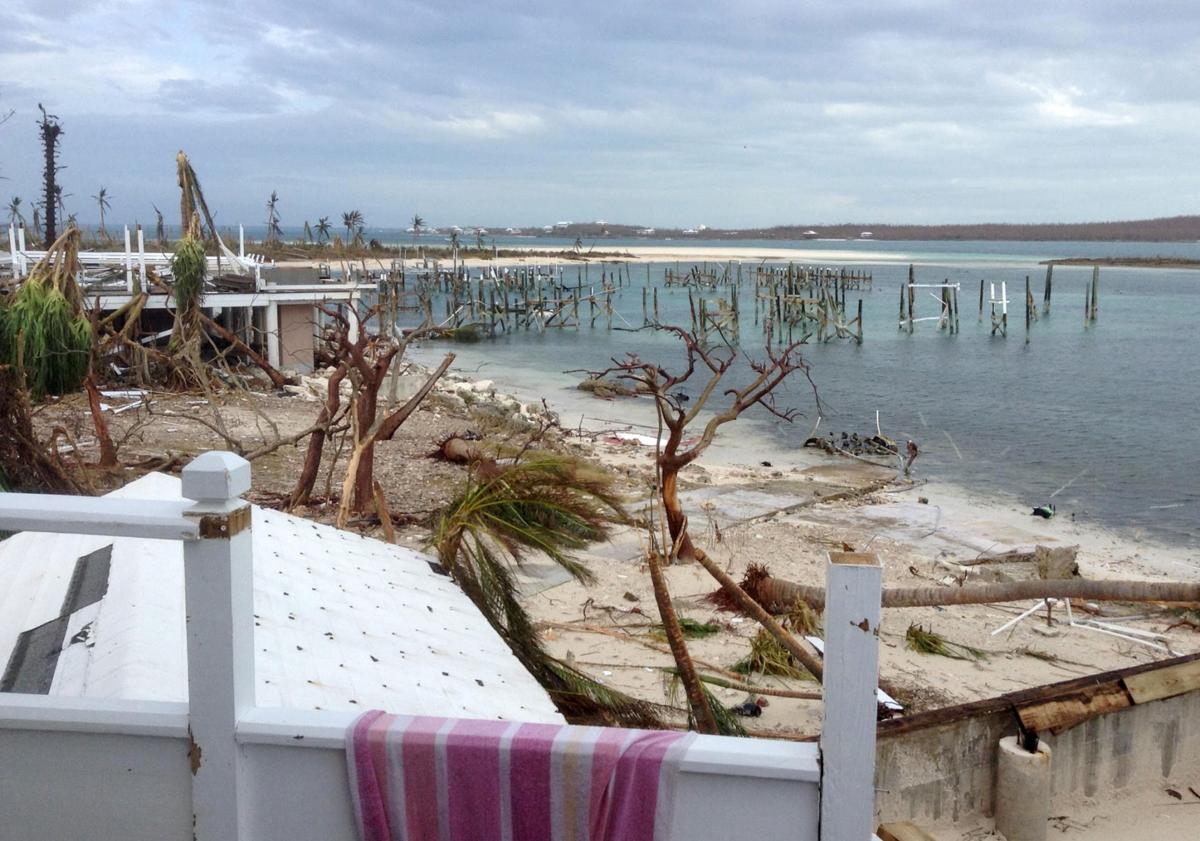 A view from O.L. and Toni Thompson's home in Elbow Cay after Hurricane Dorian struck the Bahamas. Provided/O.L. Thompson

"We were with each other. We were at peace with ourselves." O.L. Thompson said, embracing his wife Toni Thompson while discussing how they rode out Hurricane Dorian in their home on Elbow Cay, an island of the Bahamas. The two were in Hanahan when Hurricane Hugo struck the coast of South Carolina in 1989 and they decided to stay where they were as the last flight left Great Abaco Island. Andrew J. Whitaker/Staff

At the mouth of Hope Town Harbour, Elbow Reef Lighthouse stands 89 feet above the water, a silent sentinel painted in red-and-white stripes. Its rotating light — the last hand-cranked, kerosene-fueled beacon of its kind — shines through the night.

On this small island of Elbow Cay in the northwestern Bahamas, there’s no airport, bank or police department. Americans own second homes, living alongside communities of native Bahamians and Haitians.

It was here that O.L. Thompson and his wife, Toni, were spending several months at their second home, a silent season to unwind.

They came down in May from Mount Pleasant. O.L. was born and raised in the Lowcountry. He is CEO of O.L. Thompson Construction Co., one of the largest such firms in South Carolina. Since buying a home on the island about 10 years ago, he and Toni had been spending more and more time on Elbow Cay, sometimes staying for several months.

The Thompsons' home on the island's far south end is perched 25 feet above the water. It’s built of concrete with reinforced, hurricane-resistant windows and metal shutters. They have a generator.

Elbow Cay has weathered major storms before. Each time, the community rebuilds. Hurricanes were an occasional threat — to be taken seriously but not to spend one's life worrying about.

So when a storm system formed in the open Atlantic Ocean on Aug. 24, Elbow Cay paid it little attention.

Tropical Depression 5 was a long way away.

‘All we could do’

Later that day, the system got a name: Tropical Storm Dorian.

Some forecasts called for it to sputter out. Nothing was certain.

It veered off into open seas where, without land to sap away its energy, the storm could strengthen fast.

The stage was set.

On Elbow Cay, residents proceeded with a careful sense of optimism.

"We knew so many of the Bahamians who were permanent residents," Toni said. "There were five houses on our end that stayed. People were very cavalier about it. They said, 'You'll be fine.'"

Hurricanes Sandy and Irene came through after they bought their home and didn’t cause any lasting damage.

They lived through Hurricane Hugo in the Lowcountry.

The last flight off nearby Great Abaco Island left around 3 p.m. Aug. 30. The Thompsons were staying put, against the advice of their grown children who were monitoring conditions from the U.S.

Later that day, the couple joined friends for dinner.

Storm preparations on Elbow began earlier that week. The island had been in the storm's cone of uncertainty for four days. Government officials sent out bulletins and had an emergency shelter in Hope Town, roughly 3 miles from the Thompsons' home.

The Hope Town Volunteer Fire and Rescue squad reminded residents to track the storm and make necessary preparations. Firefighters took a head count of all people who remained on the island.

Aug. 31 was beautiful — like the day before Hurricane Hugo hit Charleston, O.L. said. The sea was slick and calm.

"We were saying, too bad we'd already put the boat up," Toni said.

They stayed at home and finished their final storm preparations.

There wasn’t much left to do but wait.

When O.L. and Toni got up that day, the wind was picking up outside, but their TV was still working.

After missing damage in past storms, Charleston counts up the cost from Hurricane Dorian

They watched weather reports and worried a little.

“We have a whole-house generator,” Toni said. “We thought we'll spend the storm with water — because we have to have it pumped up out of the cistern — and with lights and air conditioning.”

Toni spoke with her daughter by phone.

Dorian exploded in strength just before striking the Abacos.

Outside the wind howled, driving rain so hard that it looked like someone had aimed a large fire hose at the Thompsons' windows and let loose an unrelenting torrent. It ripped concrete tiles and solar panels off the roof, sending them tumbling down the side of the home and crashing onto their deck.

Metal storm shutters peeled open and slammed again and again against the house.

Around 1 p.m., their generator gave out, overwhelmed by the wind and rain, and the Thompsons tried to hold back the storm from breaking into their home.

In an upstairs room, they took a dresser, set it up against a set of double doors. A shutter slammed against the window glass, shattering it.

They retreated downstairs where they discovered another set of double doors by their dining room about to fail.

The doors fell to the floor and shattered.

O.L. and Toni noticed water splashing into their home, wondered where it was coming from and realized: The Sea of Abaco, normally some 25 feet below, was lapping at their door.

The storm had to end soon, Toni thought. All would pass.

But Dorian stayed, pounding their island for more than 24 hours.

They lost track of time. The house shook. They retreated into a hallway, and then to a bedroom.

Then it stopped. It was the eye.

O.L. and Toni emerged from their refuge.

"We walked out through the blown-down doors and looked at what wasn't there," Toni said.

'It breaks my heart:' Citadel football player's family loses it all to Dorian in the Bahamas

Their deck beside the Sea of Abaco was gone, as was the gazebo and their dock. Part of the roof was damaged. Rain fell throughout the house.

As they surveyed the damage, O.L. and Toni thought the worst was over.

But Dorian’s eye passed and the tempest began anew.

"That's when the tornadoes started and you could feel the suction. Your ears popped," Toni said. “It was more intense than the first half (of the storm).”

They felt the concrete walls of their home shake.

Toni thought of their three children and five grandchildren, what they would have to go through if she and her husband didn’t make it.

"I felt like it was probably all over,” she said. “You do feel that way. There's nothing you can do. We just stayed together."

"We were with each other. We'd done all we could do," O.L. said. "We were at peace with ourselves."

The Thompsons were cut off.

Dorian’s wind and waves continued sucking up debris, piling it in the street and blocking their only route to Hope Town on the north end of the island.

Buildings and docks ripped away. Dorian picked up a roughly 90-foot ferry and flung it across the road, upside down, O.L. said.

The following morning, as Dorian’s winds continued to whip around debris and rain continued to fall, volunteer firefighters came down from Hope Town, climbing over the rubble to check on O.L., Toni and the others who’d stayed on the south end of Elbow Cay.

The storm’s Category 5 intensity was gone, but Dorian's bands continued to lash the tiny island.

"It poured down rain and the rain poured in," Toni said.

They woke up to 2 or 3 inches of water in the house. Toni took beach towels, mopped up as much water as she could and wrung the water into buckets they used to flush the toilet.

"It was raining so hard I took an outside shower,” he said. “Of course, I didn't have to worry about anybody being around."

By 5 a.m. the following day, Elbow Cay was in the clear.

As the Thompsons surveyed the damage, they were devastated by what they saw.

One neighbor’s wood-framed home was severely damaged, and cottages that he owned had washed away.

Another home on their end of the island collapsed, trapping two people inside.

How the forecasts for Hurricane Dorian compared to what really happened

“Their house came right down on top of them and trapped them,” Toni said. “They were yelling through a little window. Our friend ... went over and tore the shutters off and they crawled out.”

The Thompson home, though battered, was still standing.

Neighbors came together, pooling food, water and other supplies.

"It was similar to Hugo," O.L. said. "Everyone brought the food out of their freezers."

Through their satellite phone, the Thompsons maintained a sporadic connection to Charleston.

O.L. and Toni were unable to receive calls but could make brief calls to family. They had to conserve the phone’s battery, and the signal was terrible.

In the days after the storm, they could see helicopters landing on nearby islands. For the time being, the Thompsons would have to stay put. They were not hurt. They were not sick. They did not have small children or infants with them.

No one was killed on Elbow Cay, and there were minimal injuries.

But on nearby Great Abaco Island and its city of Marsh Harbour, the destruction was almost unfathomable.

Large swaths of that island were flooded and buildings obliterated. As of Saturday, the official death toll had climbed to 50 and 1,300 people were listed as missing, according to the Associated Press.

Around 5:30 p.m. Sept. 5, the Thompsons heard an announcement over VHF radio: a ferry would come the following day at 7 a.m. and leave for Nassau, the Bahamian capital.

"Our entire focus by then was how to get home," Toni said.

After the six-hour ferry trip, the couple borrowed an acquaintance’s airplane and flew back to Charleston, arriving late on Sept. 6.

Back in their home in Mount Pleasant, the Thompsons say they're relieved, but the process of confronting what happened is just beginning.

When O.L. wakes up in the morning, he catches himself expecting the ground to still be wet.

"The euphoria and the adrenaline of just finally getting home and seeing the children is starting to wear off," Toni said. "Other thoughts ... I don't know. We want to go back and be part of that community again. We are — not now — but we are thinking ahead about rebuilding. It'll never be the same, not in our lifetime."

How you can help Elbow Cay

Send donations for Elbow Cay to:

Monetary donations can be sent to Hope Town Volunteer Fire and Rescue: