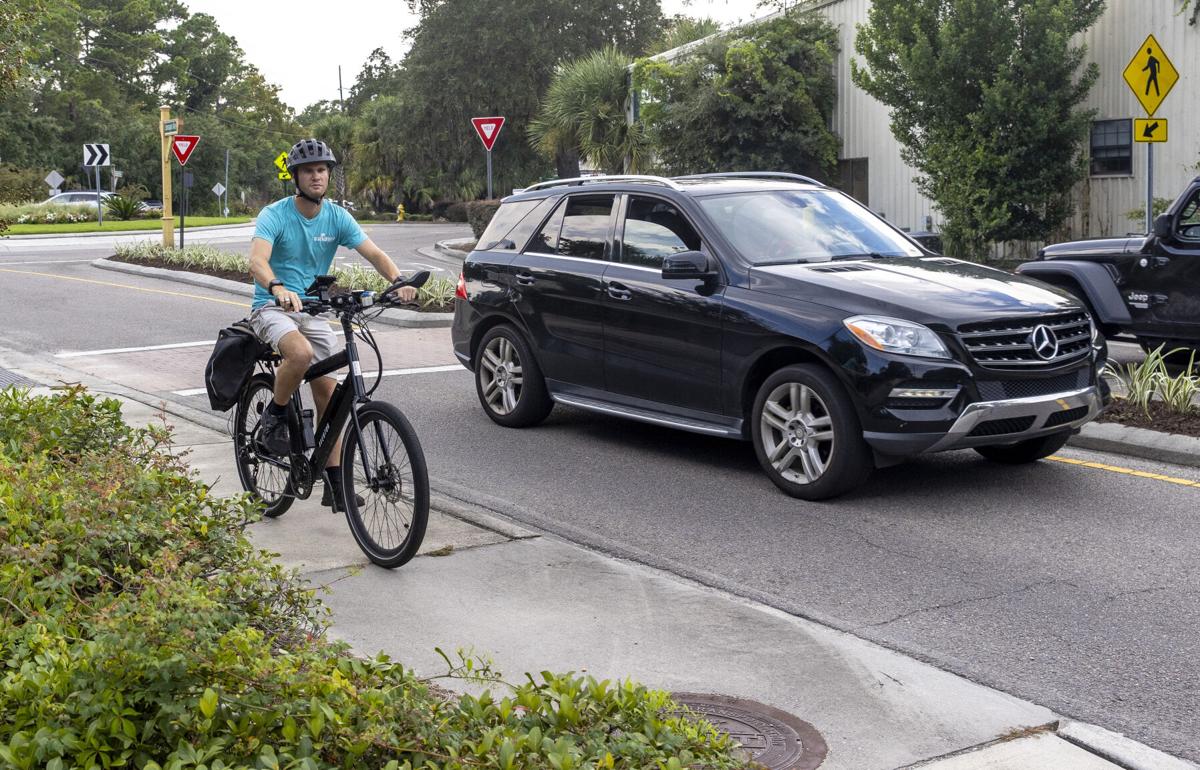 Parker Wood rides his electric bike from work on Aug. 31, 2022, on Hilton Head Island. Due to limited vision, Wood uses his bike as his main form of transportation as he travels between work and the gym. Andrew J. Whitaker/Staff 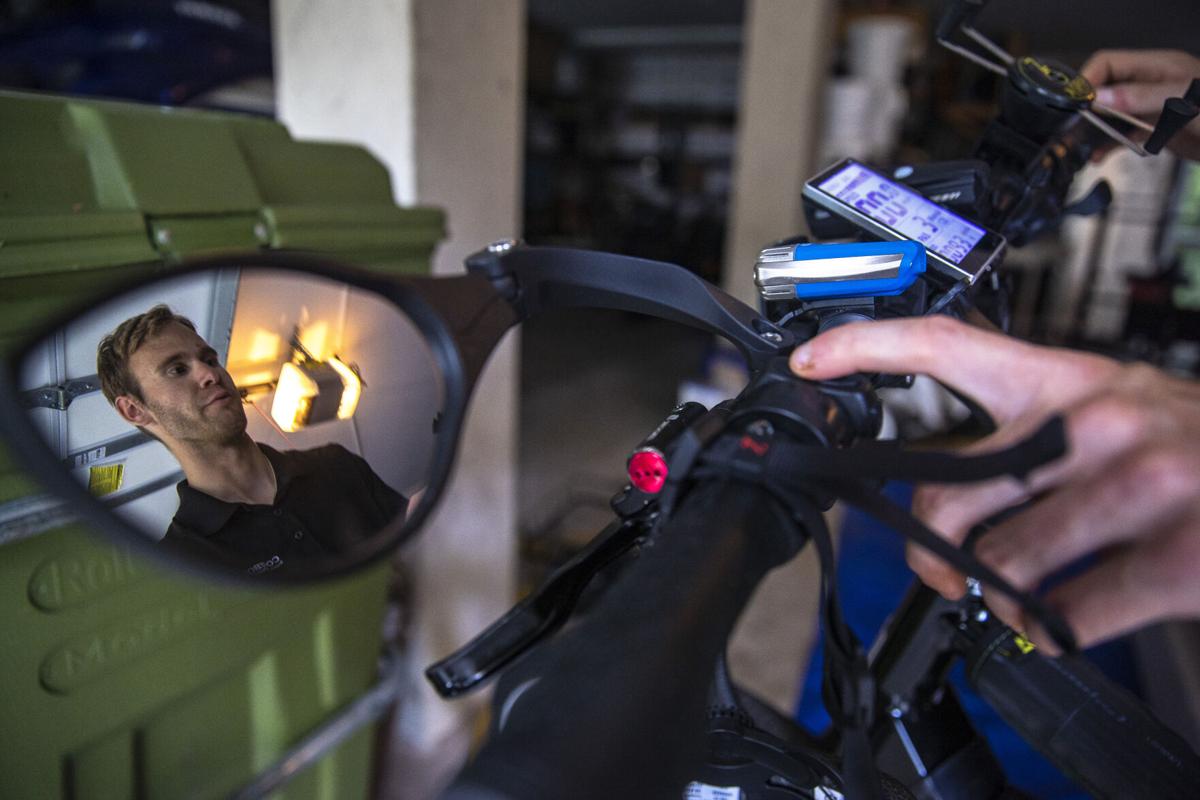 Parker Wood is seen in his reflector setting up the gadgets needed to ride his electric bike to work on Aug. 31, 2022, on Hilton Head. Wood uses his bike as his main form of transportation due to limited vision going between work and the gym routine. Andrew J. Whitaker/Staff 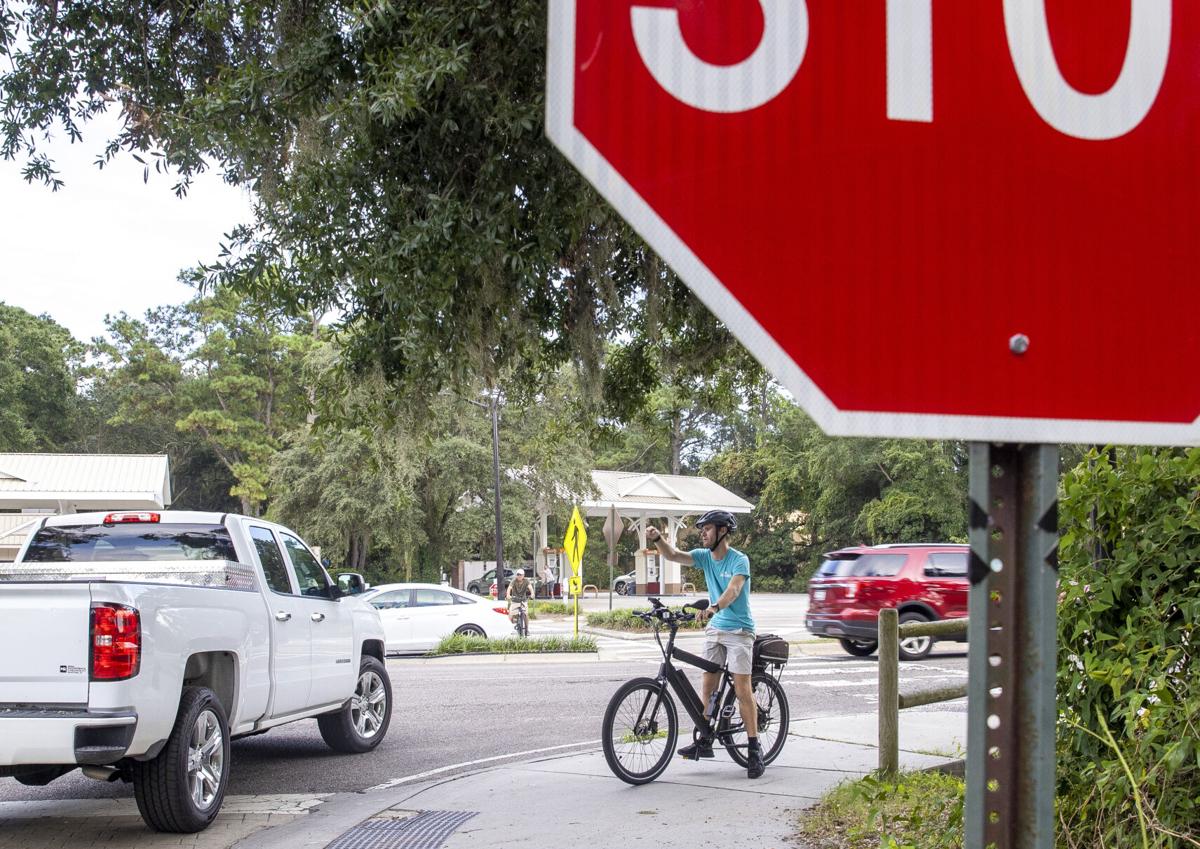 Parker Wood waves to a motorist while commuting to work on his electric bike on Aug. 31, 2022, on Hilton Head Island. Andrew J. Whitaker/Staff 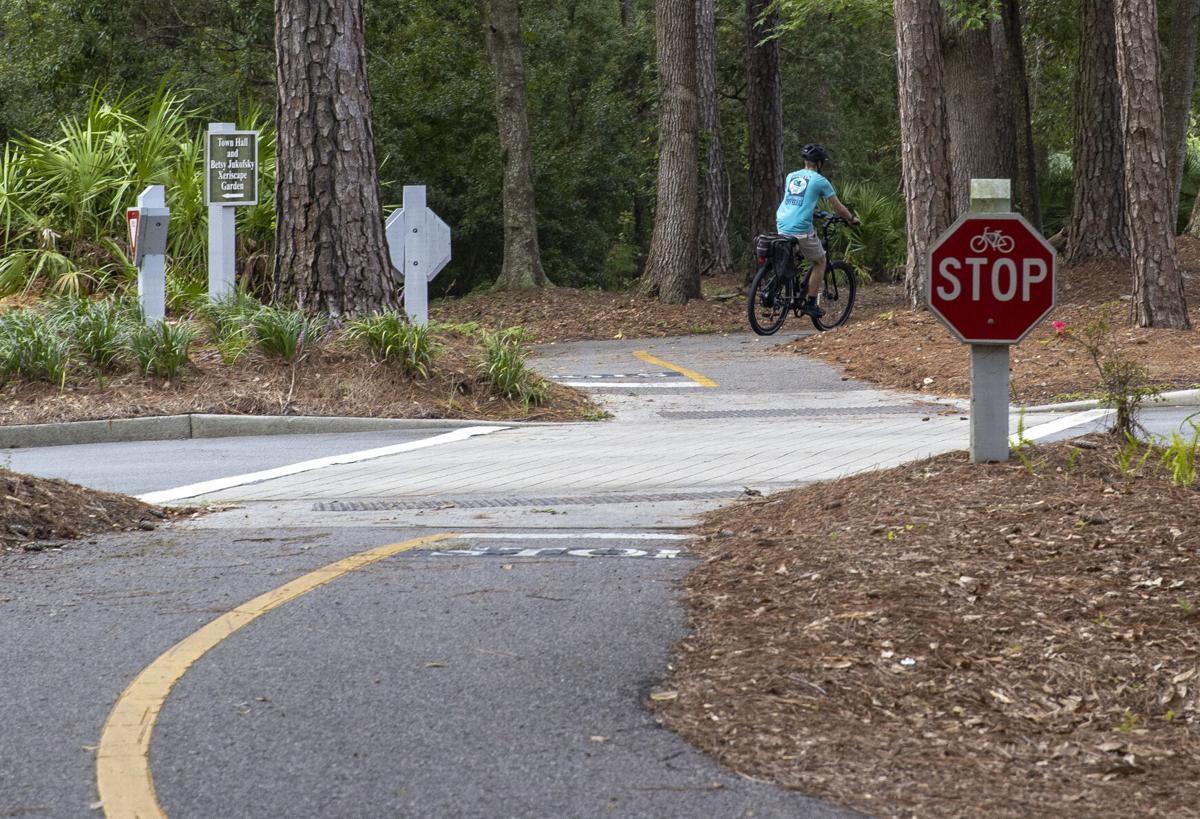 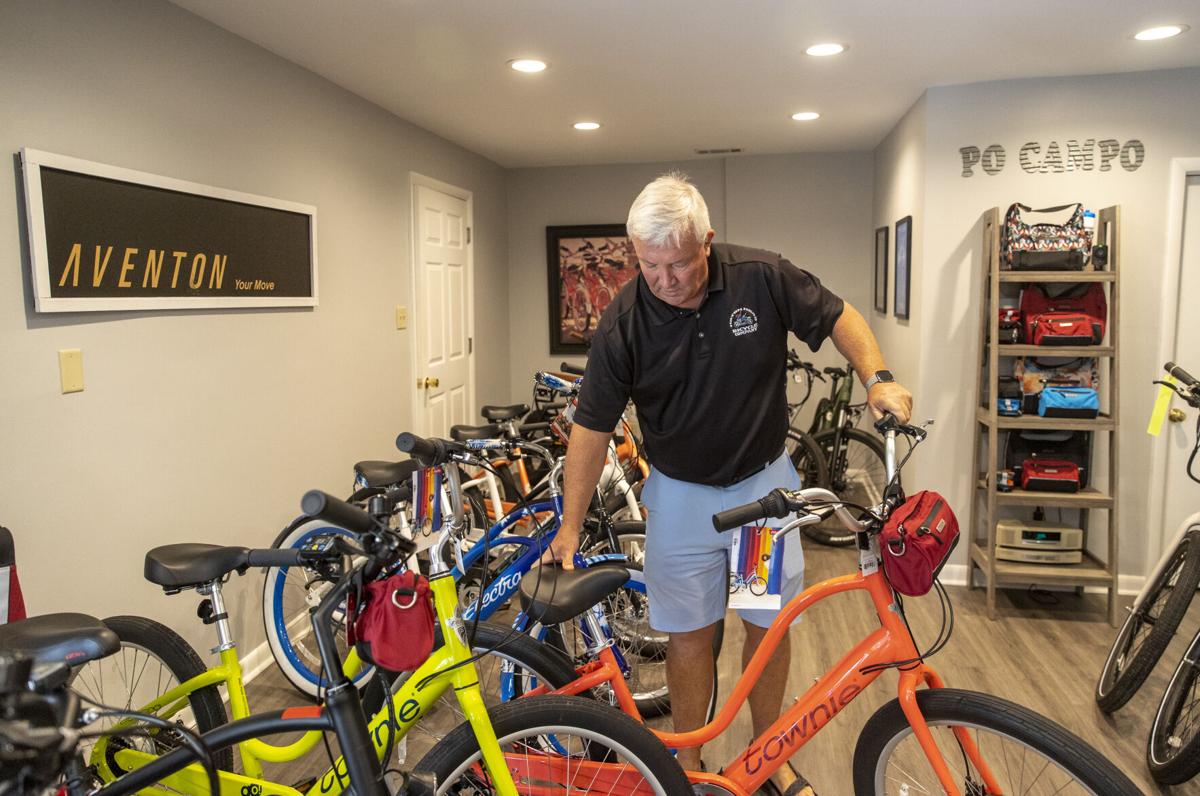 HILTON HEAD ISLAND — People move to Hilton Head for all kinds of reasons. The beach, the golfing, the weather. Parker Wood came for the bike paths.

"Me being able to get around on a bicycle and having my independence was a big key," said Wood, 20. Because he was born before his eyes fully developed, he doesn't see perspective well enough to drive.

But he can hop on two wheels and zip the 18 miles to and from his two jobs busing tables and prepping drinks at restaurants. When Wood flips on his e-bike's pedal assist, the commute is both quicker and easier.

Not everyone is enthusiastic about sharing Hilton Head with e-bikes, which are heavier and can be faster than conventional bicycles.

But last month Town Council passed 5-1 an ordinance allowing them on the town's 64 miles of public pathways.

The one dissenting voter, Tamara Becker, told The Post and Courier the island has not figured out a way to ensure everyone's safety.

"If you don't have a solution that works, you don't put something on paper and call it a day," Becker said.

Small motorized vehicles are still not allowed on pathways.

However, for advocates the vote to allow e-bikes is not just a concession to South Carolina law, which considers "electric-assist bicycles" and "bicycles with helper motors" simply bicycles, not mopeds. Instead, enthusiasts like Wood hope the new ordinance ushers in a future in which e-bikes are a permanent part of the island's transportation ecosystem.

Frank Babel, 80, is known for two things: biking and persistence.

When he retired to Hilton Head in 2004 he was appalled by its infrastructure for cycling. So he started a group called Squeaky Wheels.

"I was the guy who went to these meetings in the Town Hall and said 'You know, your maintenance is terrible. The pathways are dirty. We have no maps. How do you get across the street safely?'"

Eventually, he persuaded officials to his cause. The town invested in crosswalks, traffic signals and safety islands. It widened the pathways and added more of them.

Today a cyclist on Hilton Head can get pretty much anywhere on a paved trail that winds around neighborhoods and resorts, over wooden bridges and under tree canopies. Crashes have also gone down.

Thanks in large part to Babel and his organization, which morphed into Bike Walk Hilton Head Island, the League of American Bicyclists has three times named the island a Bike Friendly Community.

Babel's success offers both an example of how the island can evolve and an explanation for why e-bikers want to come here.

"We plan (our vacations) around bike paths," said Deb Camp, 68, who'd come to Hilton Head from Florida with her husband, Warren Camp, 74. "He's enjoying it. We're getting out of the house."

The Camps are exactly the kind of people e-bike advocates say the vehicles stand to benefit: those who wouldn't otherwise be able to ride.

"I'd gotten injured in the service and broke my back," said Warren Camp, who keeps a Vietnam Vet cap dangling from his bike frame. "Then I drove an e-bike in Fort Myers, and it changed my life forever."

Compared with a regular bike, Camp says e-bikes are more comfortable and easier to ride. He uses the pedal-assist feature "so I'm able to go twice, three times the distance without using a throttle," he said.

Camp pointed to a speedometer on the handlebar that shows how fast he's going — usually around 11 mph on Hilton Head's pathways, he said.

And if he encounters walkers or slower-moving bikers on the trail?

Camp touched a lever and made a cheery ding. "Everybody likes a little bell," he said.

The owner of Hilton Head Electric Bicycle Co., Jim Hall, said he sees a lot of folks like the Camps.

"The vast majority of (e-bike renters) were the older demographic," said Hall, who began building his fleet of e-bikes shortly after he and his wife bought the company in 2020. "Spouses that wanted to ride together, people with new hips and knees. ... We've outfitted bikes to allow folks to put their crutches on them."

The data the Halls collected from about 500 e-bike customers belied an image of buzzing swarms of young people tearing around the island; instead, "we had more people in their 80s than their 20s," Hall said.

Still, he acknowledged that some people react negatively to the sight of an e-bike. For someone used to the slender silhouette of a road bike or the easy-going attitude of a beach cruiser, e-bikes can appear like they've been injected with a growth hormone. Their tires are bigger and fatter, and the ones in Hall's shop can weigh 70 pounds.

"In fairness, people who are anti e-bike have concerns about colliding with someone on that," Hall said.

But e-bikes are not going away, at least as far as Hall can see. "There's more of them on the island every day, whether we're selling them or people are ordering them off of Amazon," he said.

The Halls do such a brisk business that they operate two separate shops now, what they call "the electric side" and "the acoustic side." The electric side makes more money.

Even he and his wife own a pair. With parking and traffic being such an issue on Hilton Head "it's a beautiful way to get around and go out," he said.

Good problems to have

While e-bike enthusiasts can speak glowingly about their benefits — for commuters, parents, people with disabilities, the environment — the person responsible for dealing with collisions, the town's new director of Public Safety, offered a more matter-of-fact perspective.

"I've been working (on Hilton Head Island) for over 30 years," said Bob Bromage. "I can assure you there have been numerous accidents involving bicycles and vehicles."

On that assertion, he aligns both with the town's new ordinance, which requires anyone who rents or sells an e-bike to provide safety information, and with the national Bicycle Friendly America Program.

Amelia Neptune, who directs the program, said the organization now takes receptiveness to e-bikes into account when making Bicycle Friendly Community awards, which Hilton Head will apply for again in 2023.

"We want to see a community ... allowing e-bikes anywhere a bike would be, but coupling that with education," Neptune said.

For example, e-bike riders should know trail etiquette, how to be audible as they're passing, and why it's important to go at a reasonable speed.

Neptune pointed out that on a road with cars, bikers are at risk. On a trail with e-bikes, pedestrians are at risk. In either of those situations, education protects the most vulnerable.

In addition, town staff are looking at structural ways to enhance safety, said community planning manager Missy Luick. Those elements might include signs, rights of way, and centerline striping.

E-bikes are here already, Luick said. Insofar as the number and range of people using Hilton Head's pathways present difficulties, she said, "they're all good problems to have."

SC is home to thousands of alligators. They bite people less often than sharks do.