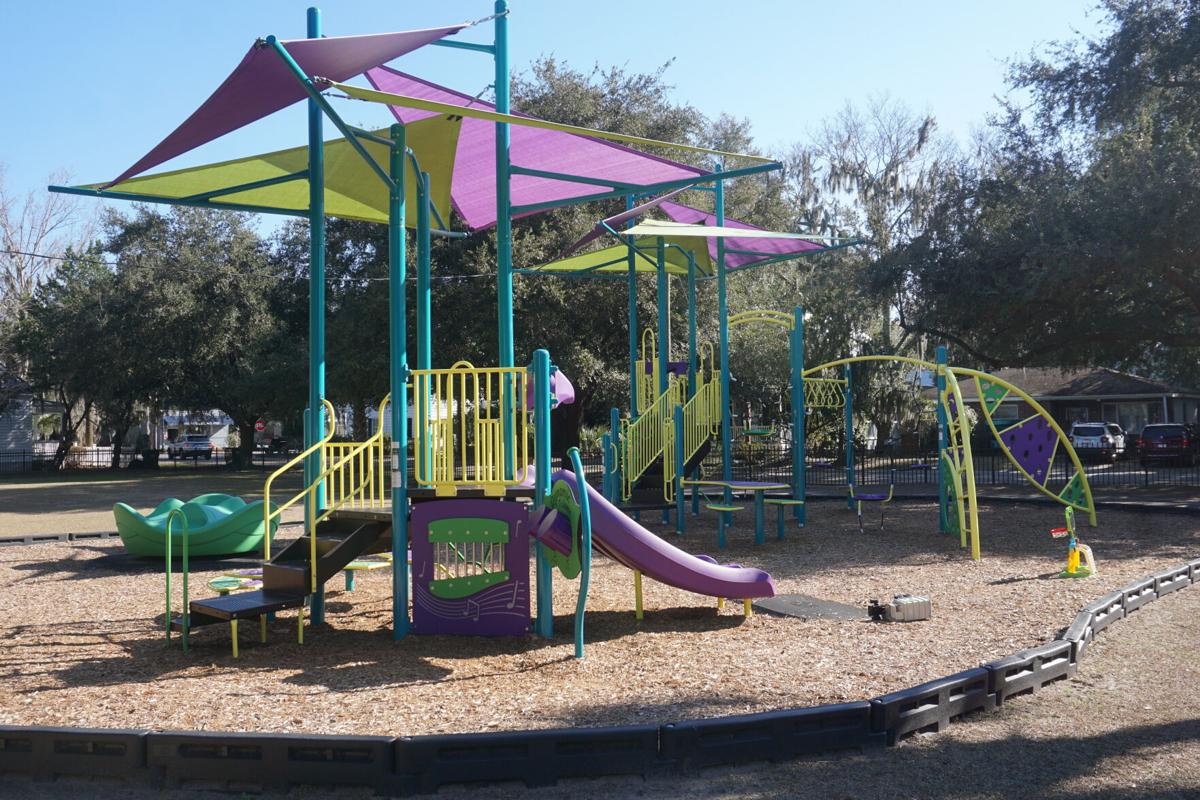 Kids can enjoy colorful playground equipment at Washington Street Park in the Northwest Quadrant of Beaufort on Jan. 10, 2022. Michael Cuglietta/Staff 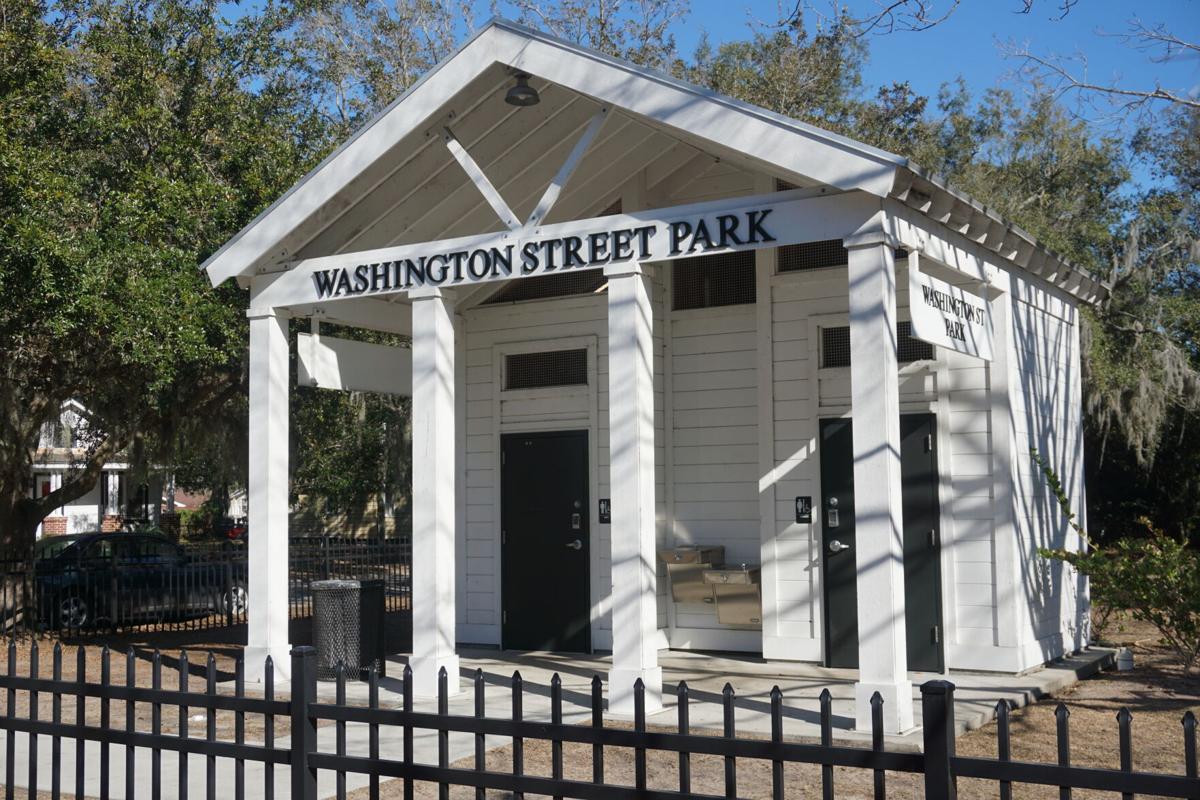 Washington Street Park is in the Northwest Quadrant of Beaufort, pictured on Jan. 10, 2022. Michael Cuglietta/Staff

BEAUFORT — In 1941, frustrated by the city's failure to provide Black children with a recreational area, a group of residents bought a plot on Washington Street in the Northwest Quadrant neighborhood. On it, they installed a swingset and climbing bars.

The area became known as Washington Street Park. At the time, it was the only park in the city where Black children were allowed to play.

"I remember having churned ice cream there. It was quite a place. The only place we really had to go when I was growing up," said Fred Washington, who grew up a few blocks from the park and now serves as chairman of the board for Beaufort County Community Center, the nonprofit that owns the park.

Today, the park still occupies the same plot of land. It's surrounded by single-family homes, just a few blocks from the University of South Carolina's downtown Beaufort campus. There's an outdated swingset with chain ropes and a half-court basketball hoop with a torn nylon net. The restrooms are an impressive white structure built in the antebellum style. The two most recent additions are a pair of ultra modern, brightly colored playground structures with purple and yellow canopies for shade.

Throughout the years, the city played a small role in helping to maintain the park.

"The city had the foresight to at least make sure the grass was cut and things like that. But in terms of adding structures or adding things to it, there wasn't much investment," said Washington.

In 2017, the city and Beaufort County Community Center entered into an agreement in which the city formally assumed the responsibility of upgrading and maintaining the space.

"The owners of the park realized it would be very difficult for them to raise the money to do what they felt was important for the neighborhood," said Linda Roper, who has worked for the city for 34 years and serves as downtown operations and community services director.

With the agreement in place, both parties sat down and drafted a masterplan with input from the community. Total improvements were estimated to cost $925,000.

The city has been tackling the upgrades in phases. First, the restrooms were built. Next, the two playground structures were added, one for toddlers and one for 5-12 year-olds.

Washington Street Park will soon see the next wave of improvements, to be paid for through a recently awarded $250,000 Community Development Block Grant from the federal government, to which the city will contribute an additional $25,000, and a $20,000 grant from the S.C. Park and Recreation Development Fund.

"This is near and dear to my heart because I was born and raised in Beaufort, and I've known this park for a very long time," Roper said. "And I just felt like it wasn't getting the love and attention that many of the other playgrounds had been getting."

More than a playground

From its conception, Washington Street Park has served as a multipurpose space, where churches and other groups could host fundraisers and events for children.

"They'd bring the big tent in and they'd have various acts," Washington said.

Martin Luther King Jr. was no stranger to South Carolina

Robert Smith, a Boy Scout troop leader, lived two blocks away. He used to bring his troop to the park to practice marching.

Today, a local church, in conjunction with the fire department, offers free meals to those in need under the park's pavilion. The pavilion also serves as home to family reunions. The federal block grant will go toward building a larger pavilion.

"It'll be used for events as well as a picnic pavilion," Roper said.

Washington hopes the new pavilion will draw people from outside the immediate community.

"I'm hoping it will be a place where people of diverse backgrounds can get together, knowing the history," he said.

In a place where water can be dangerous, Beaufort swim teacher brought safety, comfort

The grant from the state Park and Recreation Development Fund will be used to relocate the basketball court. The court now is located in front of the pavilion. That area will be transformed into an open space, where audiences can gather to watch performances.

Washington points out that Aunt Pearlie Sue lives nearby. In addition to appearing in the film "Forrest Gump," Pearlie Sue had a one-woman show, "Tales from the Land of Gullah," on PBS. She also is the founder of the musical group The Gullah Kinfolk.

"I can envision her and other folks having performances in the pavilion," Washington said.

The city is accepting bids for the improvements.

"Hopefully by the end of the year, we'll have a pavilion and a new basketball court," Roper said.

Washington's daughter and his grandchildren recently moved back to the area. They are currently living on the other side of Boundary Street.

"They're the types that believe in getting out every day. They go out to Pigeon Point Park, cause it's closer to them," he said.

But they are in the process of renovating a house near Washington Street Park. Once the renovation is complete, Washington looks forward to his grandchildren making memories in the park, which was the backdrop to many of his fondest childhood memories.

In the meantime, Washington and the Beaufort County Community Center are working on getting a historical marker placed in the playground to help folks realize the significance of the space.

Beaufort and Jasper counties, municipalities get serious about affordable housing

Beaufort and Jasper counties, along with six municipalities, have pledged $3.4 million dollars to establish a regional affordable housing fund. With a newly established board in place, they're trying to have an impact as soon as possible.    Read moreBeaufort and Jasper counties, municipalities get serious about affordable housing

Making the switch to clean energy can be too costly and time-consuming for many small-business owners. But thanks to a federal grant, a Bluffton business was able to take the leap.  Read moreSC business added major solar arrays. The process wasn't easy.

Beaufort County is the first district in the state to put a bilingual parent liaison in every single school. It's one way the school district is trying to improve academic outcomes for multilingual and Hispanic students, two of the groups struggling most since the start of the pandemic.  Read moreBeaufort's bilingual parent liaisons ensure learning's not lost in translation