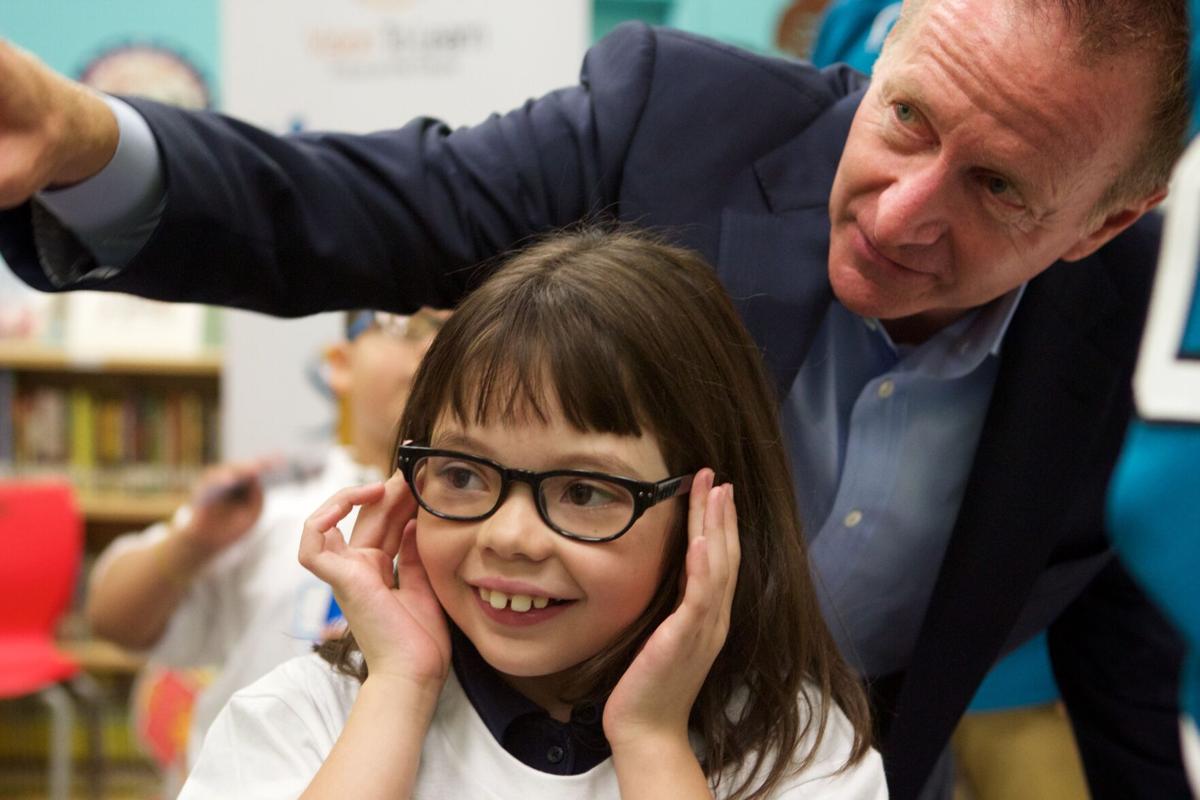 Vision to Learn runs nonprofit mobile clinics in 10 states and has provided 240,000 pairs of free eyeglasses to children across the country since 2012.  Vision to Learn/Provided 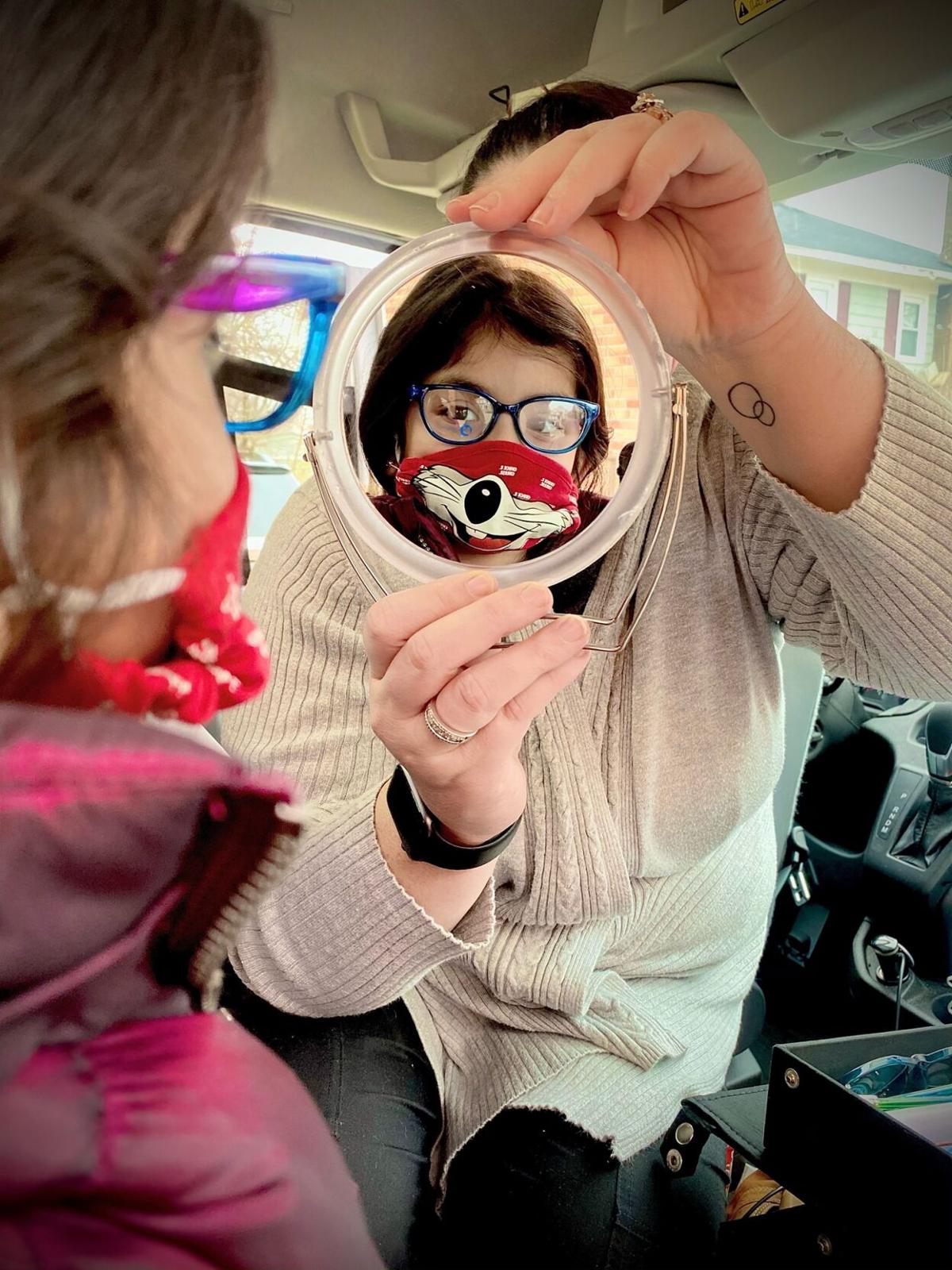 A nonprofit with a fleet of mobile eyeglass clinics that provide free prescription glasses to low-income students wants to come to Charleston, but a state law and group of eye doctors stand in the way. Vision to Learn/Provided 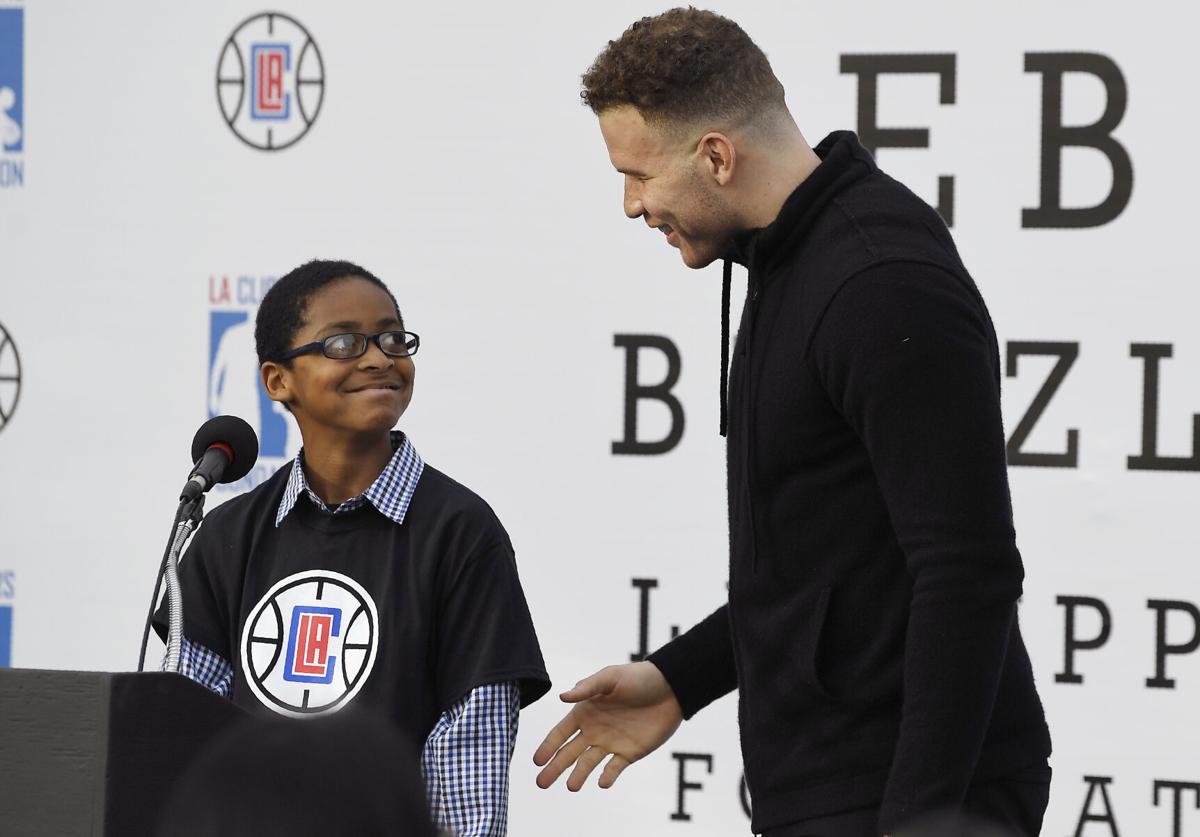 Nasir Lucas, 11, looks at NBA player Blake Griffin while speaking about what it was like to receive eyeglasses for the first time at Lovelia P. Flournoy Elementary School in 2018, in Los Angeles, where the Clippers announced a partnership with Vision to Learn and the Los Angeles Unified School District to provide students with eyeglasses. File/Mark J. Terrill/AP 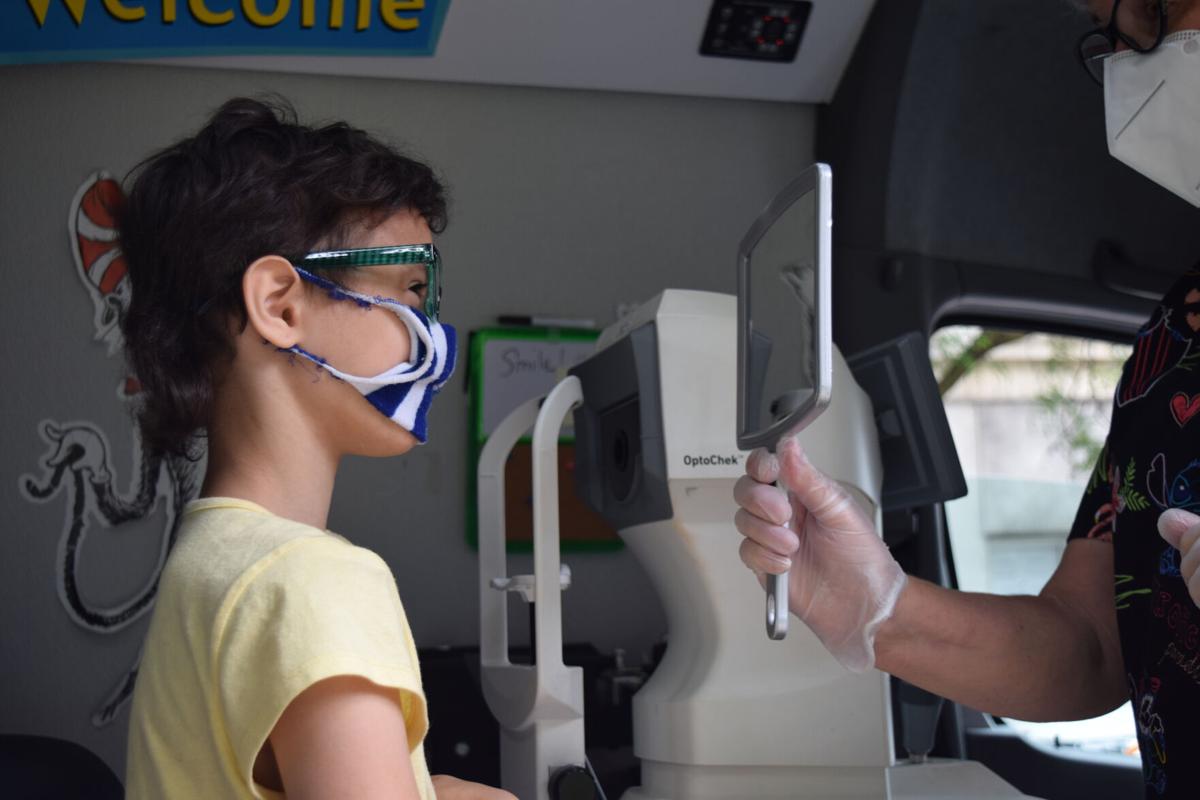 Experts estimate 7,500 low-income students enrolled in Title 1 schools in Charleston would qualify for free eyeglasses if Vision to Learn was allowed to operate a mobile clinic in the Lowcountry. Vision to Learn/Provided 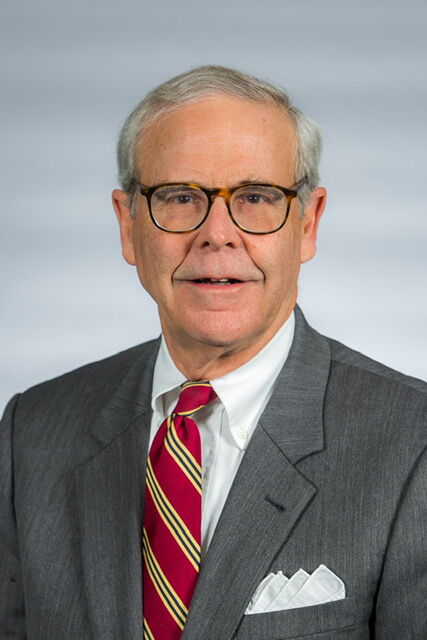 A national nonprofit that wants to provide free prescription glasses to thousands of low-income students in Charleston has been thwarted by a group of eye doctors in South Carolina and an obscure state law that restricts where mobile clinics are allowed to operate.

Vision to Learn, which already runs nonprofit mobile clinics in 10 states and has provided 240,000 pairs of free eyeglasses to children across the country since 2012, has been met with opposition from optometrists in other states before. But the hurdles it faces in South Carolina are unique due to an existing state law that prohibits a mobile van from conducting simple eye exams on a school campus.

Henry Blackford is a retired Charleston banker who has raised hundreds of thousands of dollars since 2018 to launch Vision to Learn in the Lowcountry after he and his wife Sherry watched a segment about the organization on PBS. Blackford wants the state law changed even as the South Carolina Optometric Physicians Association has lobbied lawmakers to maintain the status quo.

"What gets me is the program is operating very successfully in Charlotte and in Atlanta. It's frustrating," Blackford said. "The optometrists have been a huge stumbling block. Then we ran into the pandemic."

In a prepared statement provided to The Post and Courier, the state optometrists' association said it opposes the fact that Vision to Learn doesn't dilate a student's eyes during an exam.

"While we are not opposed to the idea of mobile clinics, it does raise serious concerns regarding the quality of care that would be provided," the group wrote. "In the absence of a dilated exam, the chances of missing serious medical conditions and issuing inaccurate glasses prescriptions goes up substantially."

Jackie Rivers, executive director of the S.C. Optometric Physicians Association, said no one from the association or its board was available to be interviewed for this article. The association's prepared statement went on to call Vision to Learn "unwilling to compromise" and said, "No child, especially our most vulnerable, deserves substandard care, simply because of where they live or their socioeconomic status."

But Blackford, and others associated with Vision to Learn, have argued that the students it seeks to help are falling through the cracks of the existing health care system.

"I don’t think, quite honestly, (the optometrists) are worried about these 7,500 low-income Title 1 students who need glasses but don’t have them. Nobody is serving them," Blackford said.

He believes the doctors' group is more concerned about a future that would allow for-profit mobile clinics to set up shop outside retirement communities and nursing homes, potentially cutting into the optometrists' margins down the line.

"That's just my suspicion," he said. "I can’t figure out what else it could be."

Joan Chu Reese is the executive director of Vision to Learn. Like Blackford, she said the organization shouldn't be viewed as a threat to the optometrists' business model. In fact, she said, Vision to Learn is identifying patients who will likely need lifelong eye care — the doctors' future client base.

"There’s the natural fear that we’re going to take customers from an optometrist," said Reese, who is based in Los Angeles. "Vision to Learn’s job is not to see these kids forever. We’re finding kids who are outside the optometric world and bringing them in. … It’s so unfortunate that we got hung up here in South Carolina with this issue."

It's not only the state's optometrists' association that believes dilation is necessary during every eye exam. The S.C. Board of Examiners in Optometry, made up of mostly optometrists, refused in 2019 to license the Vision to Learn mobile clinic for the same reason.

This doesn't mean all doctors agree on the issue. Dr. Soyung Ailene Kim, a staff optometrist who works for Vision to Learn in Atlanta, said the exams conducted inside the Vision to Learn mobile clinics are usually sufficient to determine the level of prescription a student with vision problems needs. Furthermore, because these exams are conducted on the school campus during the school day, dilating a student's eyes would impair their vision for several hours, Kim explained.

"The reason why we don’t dilate the children in the van is, timewise, it doesn’t work," she said. "Their near-vision will also be gone pretty much for the rest of the day."

That said, Kim sees about 20 students each day and said at least a few of them inevitably need a more comprehensive exam than Vision to Learn is able to provide. When that's the case, she refers them to an outside optometrist in the community. "If I feel any doubt … I always refer them."

The question about dilation eventually became so fraught in South Carolina that lawmakers asked Attorney General Alan Wilson to weigh in. In January 2020, Wilson's office issued a 13-page opinion finding that Vision to Learn could dispense prescription eyeglasses to students without violating the state's existing eye care statute. And while the state's Board of Examiners in Optometry established guidelines that call for dilation during a comprehensive eye exam, the Legislature has imposed no such requirement, Wilson's office wrote.

"It’s not a court ruling, but it is from the highest legal office in South Carolina," said Reese. "It says the type of operation we’re proposing should be allowed."

The S.C. Society of Ophthalmologists has not publicly expressed an opinion about Vision to Learn. Ophthalmologists, unlike optometrists, are medical doctors. Optometrists attend optometry school, not medical school.

After Henry and Sherry Blackford first saw that PBS segment about Vision to Learn in 2018, they wanted to learn more.

"It was a 'wow' moment for both of us," Henry Blackford said.

So they started exploring the idea of launching the program here in Charleston. That process eventually led them to Charlotte, where Hugh McColl III and his wife Renee had already established a branch of Vision to Learn. The McColls invited the Blackfords to attend "Distribution Day" at a school in Charlotte, where hundreds of students were presented with their new glasses.

"When you watch one of these kids put a pair of glasses on and they can read a book or see a tree or the school board, it’s life-changing," McColl said. "My wife and I … we’ve both raised money for lots of different organizations and I’d say this was probably the easiest one I’ve come across."

Blackford found it fairly easy, too. In less than a year, he was able to secure more than $600,000 in commitments from national and local funders, including The Post and Courier Foundation, Roper St. Francis Healthcare and the Storm Eye Institute at the Medical University of South Carolina. MUSC, in fact, made a verbal pledge of $110,000 to buy the mobile van and outfit it with equipment.

Blackford said MUSC, and other groups, withdrew their pledges when the pandemic hit. He estimated he still has about $300,000 in commitments.

It's an easy mission to get behind, Blackford said, because the pitch is straightforward. The need is obvious and the solution is simple.

In third grade, he said, 68 percent of White students are reading at grade level, compared with only 28 percent of Black students.

"It gets worse by eighth grade," he said.

The report doesn't address any issues related to eyesight, but Blackford said he can't help but wonder if thousands of free prescription glasses might help close that reading gap.

He's not the only one. School nurses support the Vision to Learn model, too.

"It’s one thing to say 'I know I need glasses,' and it’s another thing to get the glasses and have them," said Ellen Nix, director of nursing services for the Charleston County School District. That's why Vision to Learn works, she said.

"They come in and are able to provide those glasses to the child."

In a 2019 in-house survey completed by 90 nurses employed by the Charleston County School District, more than 95 percent of them agreed that free exams and free glasses provided by a mobile vision clinic would benefit their students.

It will require a change in state law to make that happen. Existing rules only allow these mobile clinics to operate outside health care facilities.

Reps. Joe Bustos and William Cogswell, both Charleston Republicans, filed a bill in February that would make an exception for nonprofit mobile clinics to offer vision services outside Title 1 schools. It was written specifically with Vision to Learn in mind, Cogswell said.

And while it has been referred to a committee for consideration, the legislative session is winding down in May and it's unlikely the bill will come up for discussion before next year.

But there's still hope this spring for Vision to Learn. The state Senate added an amendment this week to its version of the annual budget that would provide a one-year pass for mobile eye clinics to operate outside Title 1 schools. If the amendment passes with the budget, it would give Vision to Learn a chance to launch in Charleston this fall, while buying more time for the Legislature to change the law permanently in 2022.

But the House must agree to the budget amendment, too. Negotiations start in May.