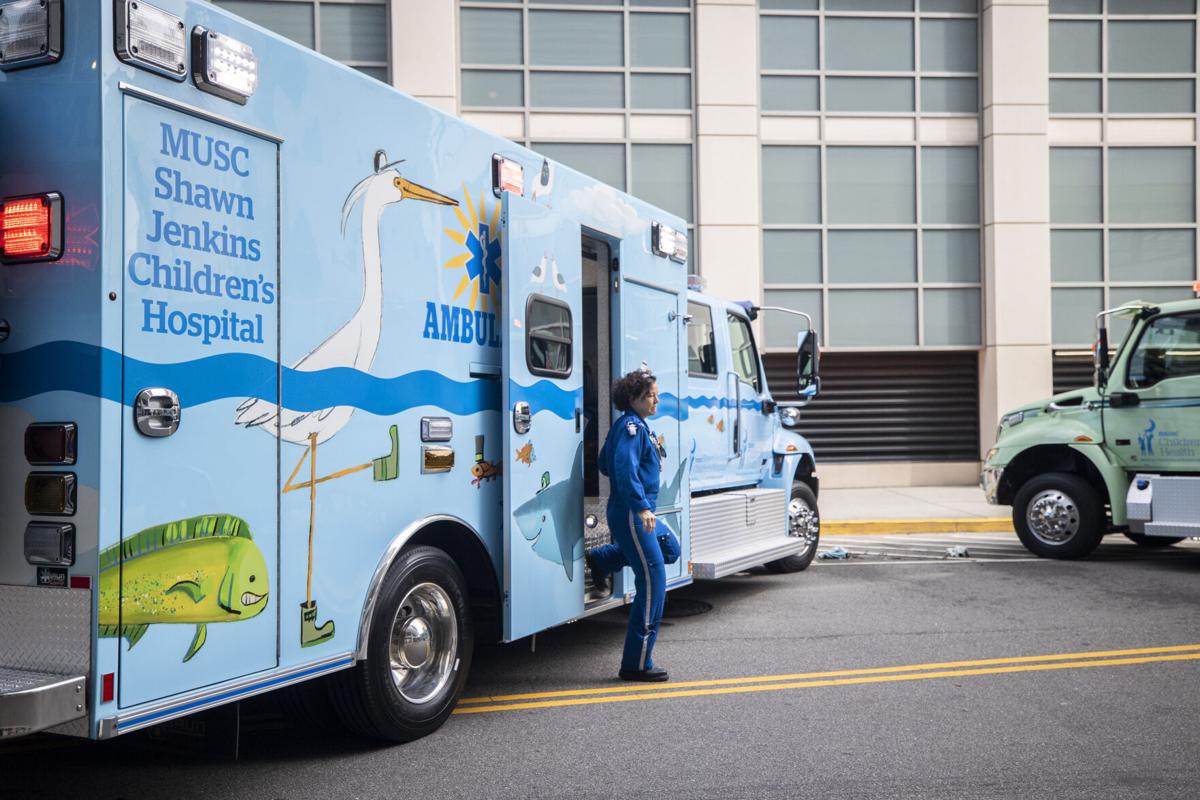 Flight nurse Tamara Carpenter steps out of one of two of the Medical University of South Carolina's new ambulances for Shawn Jenkins Children's Hospital after an unveiling presentation on Aug. 2, 2022, in Charleston. Gavin McIntyre/Staff 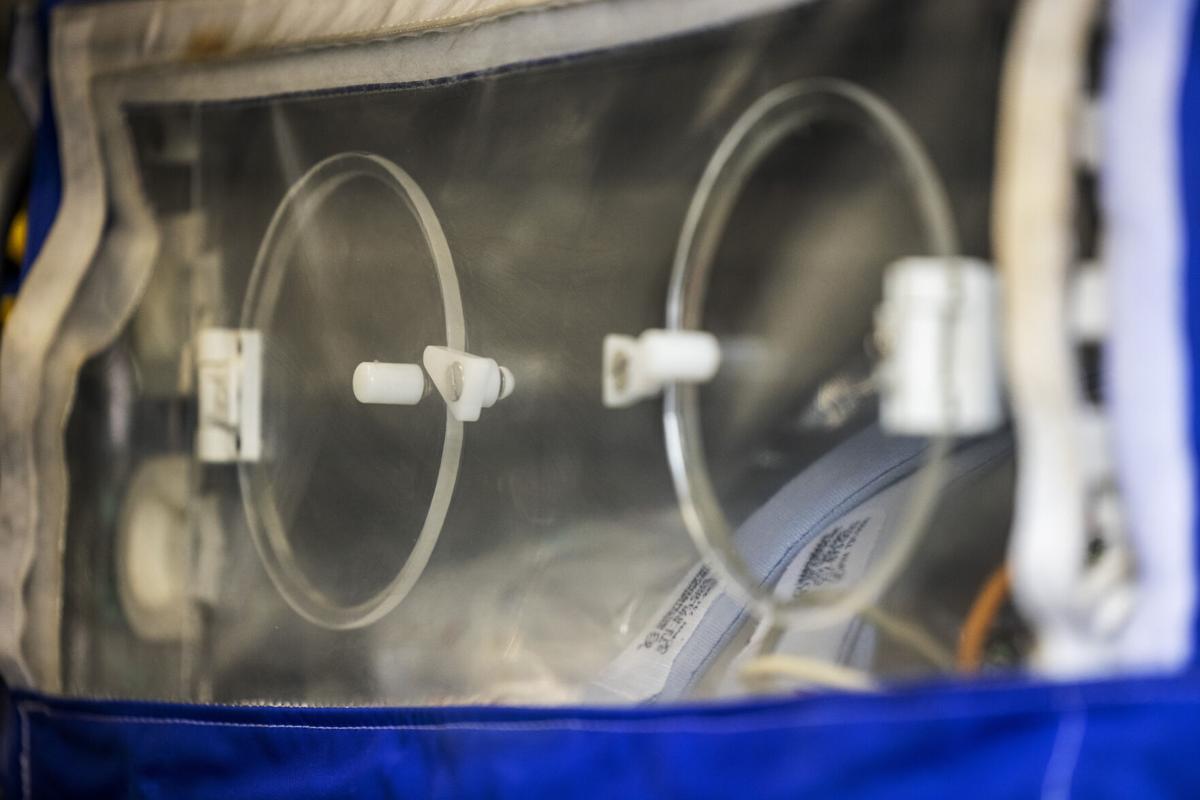 Equipment designed to carry neonatal patients was showcased during an unveiling of two new ambulances for the MUSC Shawn Jenkins Children's Hospital on  Aug. 2, 2022, in Charleston. Gavin McIntyre/Staff 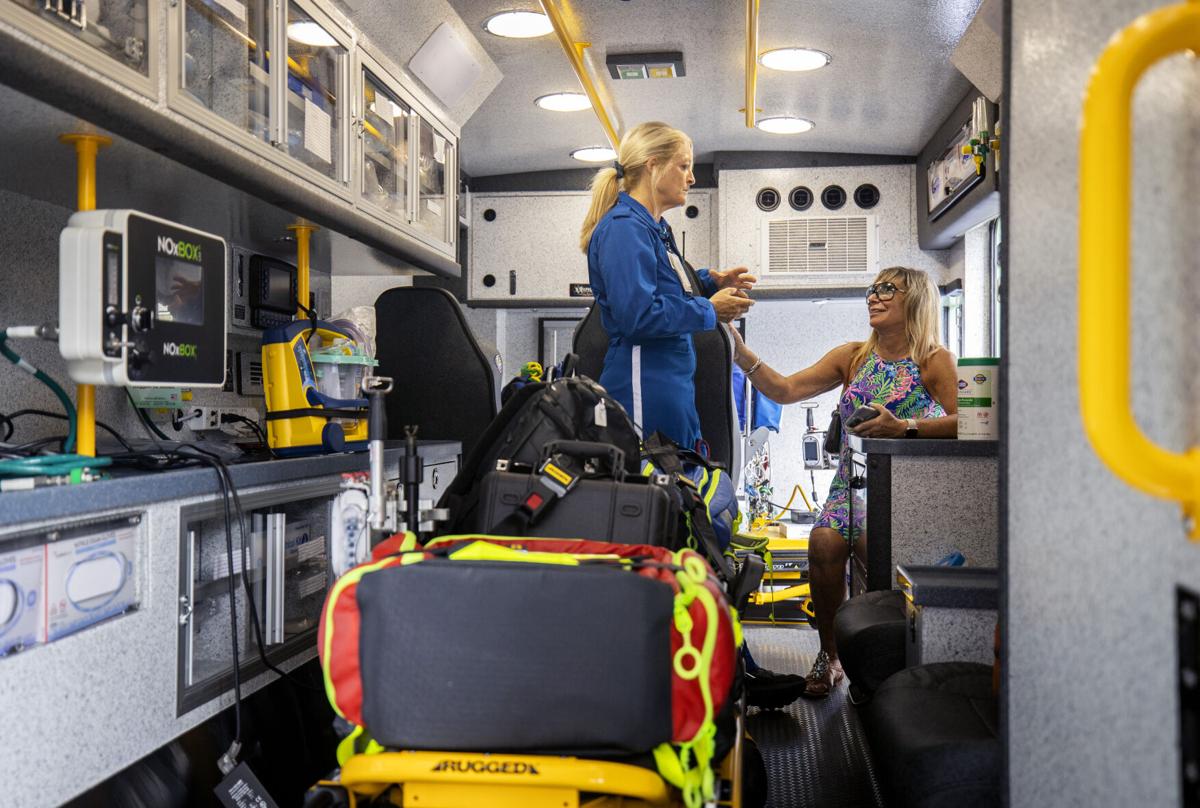 Lisa Kippes (left), a flight respiratory therapist, talks to Sharon Carney about the work they’ll be able to do in the new ambulances the MUSC Shawn Jenkins Children's Hospital received Aug. 2, 2022, in Charleston. Gavin McIntyre/Staff

The two new gleaming ambulances in front of the Shawn Jenkins Children's Hospital at Medical University of South Carolina are really gateways to higher levels of care for the youngest patients.

"They are truly the front doors of this amazing facility," said Dr. John Cahill, medical director of the hospital's Meducare Transport System.

The new pediatric/neonatal ambulances are part of the rapid transport system, which includes a helicopter, to bring sick children and premature babies to the hospital for care. They are designed to care for "the most fragile people in our state," said Dr. Mark Scheurer, chief of Children's and Women's Services at MUSC Health.

MUSC prepares to vaccinate children under 5 against COVID-19

The ambulances can transport babies as small as 500 grams, or just over 1 pound, and as early as 23-24 weeks, said flight respiratory therapist Monica Ortiz. Within a special incubator on board, those tiniest babies can be intubated with a tube as small as 2.5 millimeters or "slightly larger than a coffee stirrer," she said.

Helping that newborn breathe is often the biggest battle in treating the premature, said Mark Daniell, operations coordinator for the service.

"Breathing is everything in the pediatric setting," he said.

Often, premature babies' underdeveloped lungs are fighting against the blood pressure in the lungs to deliver oxygen, said Dr. Elizabeth Mack, chief of pediatric critical care at the children's hospital.

"Those blood vessels are clamped down," she said.

The ambulances carry special gases, such as inhaled nitric oxide, that can help relax the blood vessels and lower that pressure. Another, called Heliox, a mixture of helium and oxygen, has a much lower density than air and can require less effort for the baby to breathe and can also penetrate into restricted areas of the lungs, according to a study in March in the journal Frontiers in Pediatrics. MUSC claims the ambulances are the only ones in the state carrying Heliox.

The trucks are not cheap, Daniell said, running close to $500,000 just for the vehicle and another $250,000 for the instruments and equipment.

The Meducare Pediatric Transport Team averages one to two transports a shift, but that can vary from none to five in a shift between ground ambulance and air, said Operations Coordinator Mark Daniell.

During 2021, the team transported 644 patients, nearly 60 percent of whom were newborns who went from other places to the high-level Neonatal Intensive Care Unit at the Shawn Jenkins Children's Hospital, he said.

In 2020, the team transported 532 patients, including 349 premature babies and newborns or 53 percent of the total, Daniell said.

One critical feature the transport team wanted was the ability to carry and treat a pediatric patient and a newborn at the same time without any equipment changes, said flight nurse Tamara Carpenter. With the older vehicles, changing from one to the other would require a retrofit. If the ambulance was in Myrtle Beach picking up a child, and they got a call to also transport a newborn, "we'd have to go back to Charleston," to make the changeover, said flight respiratory therapist Lisa Kippes.

"That would be a delay" for the second patient, Carpenter said. If the weather is bad, the ambulances are the ones taking newborns and sick children from across the state back to the children's hospital in Charleston, she said.

Millions could lose coverage this year when federal protection expires

"If they can't fly, we drive long distances" to get them, Carpenter said.

Now with telemedicine, it's possible for the team back at the hospital to already have consulted on the case prior to transport, Mack said.

"I might already be looking at the child when the team arrives," she said.

It allows the hospital to begin that treatment immediately, Daniell said. And it is a bridge back to higher care at the other end of the trip, said Dr. David Zaas, CEO of the Charleston division of MUSC Health.

The new ambulances "ensure children across the state have access to that level of expertise," he said.

COVID vaccinations for kids as young as 6 months could be 'game-changer' for SC, DHEC says