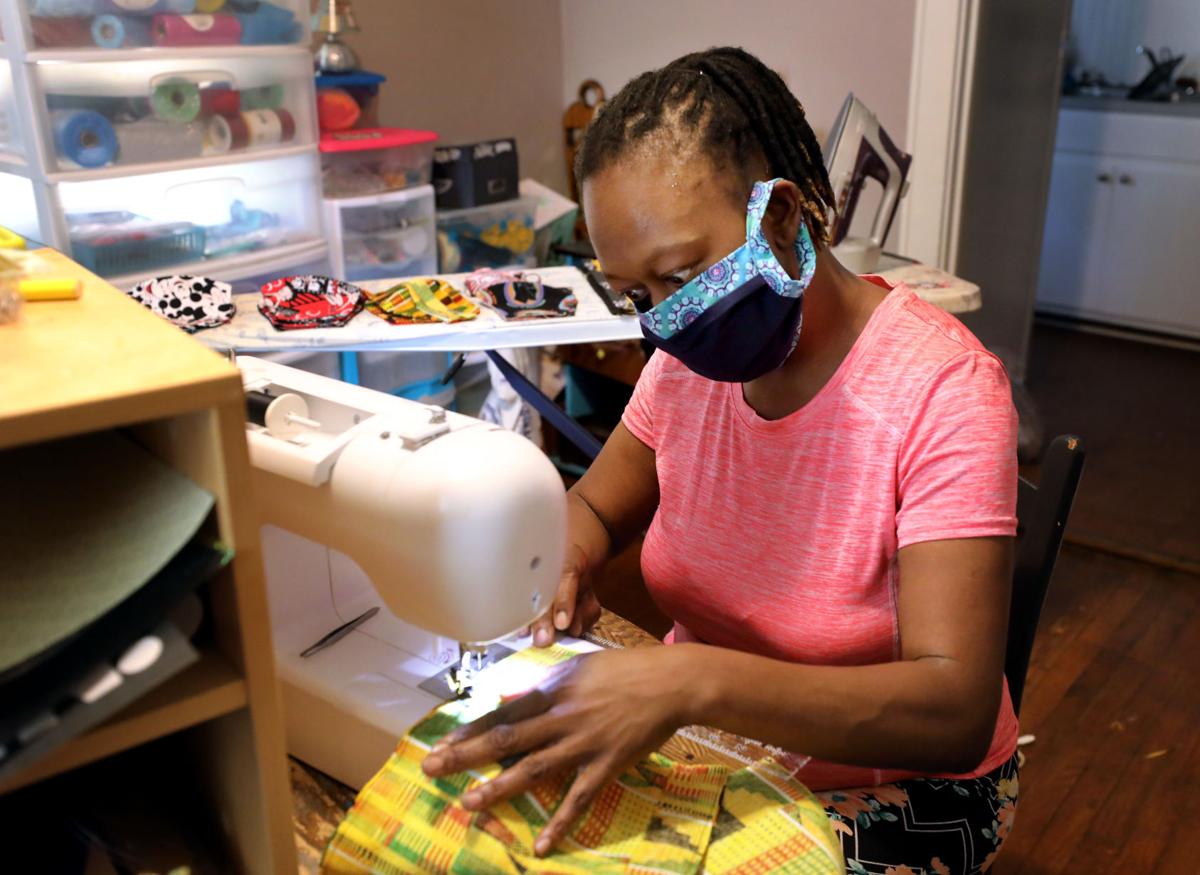 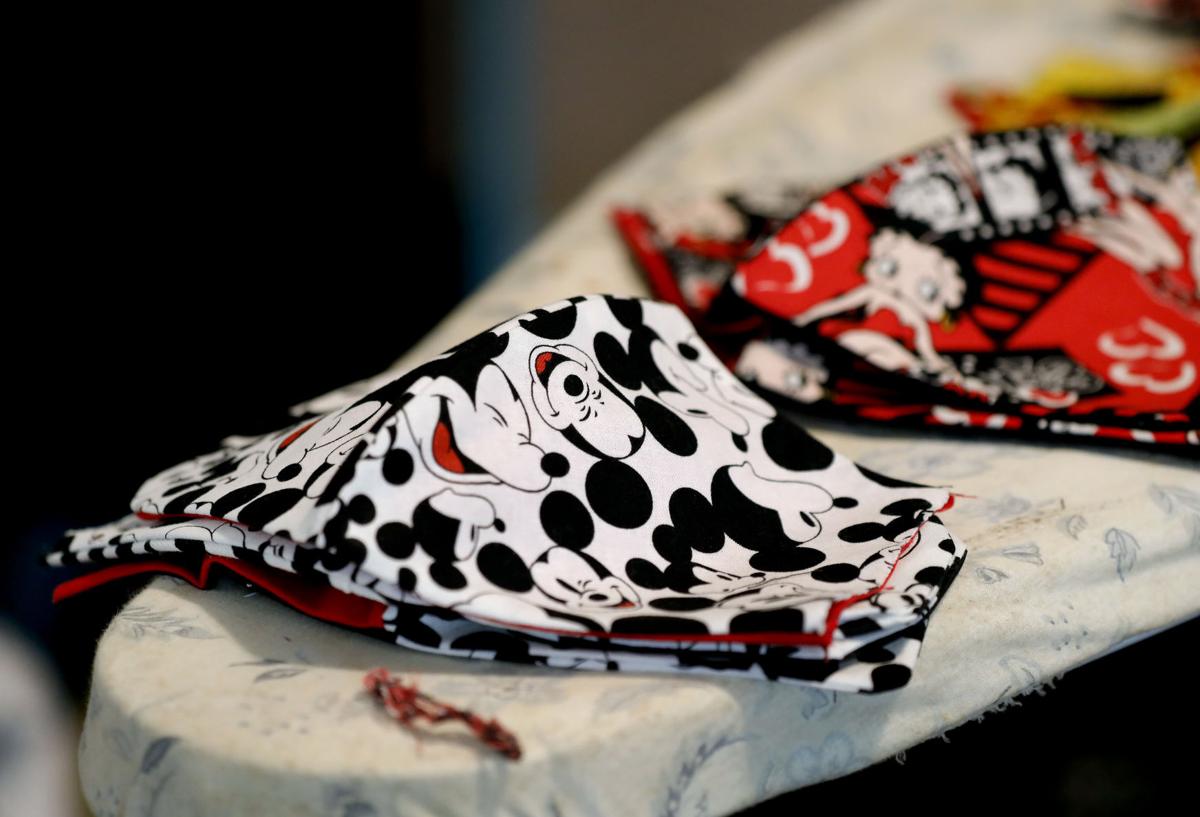 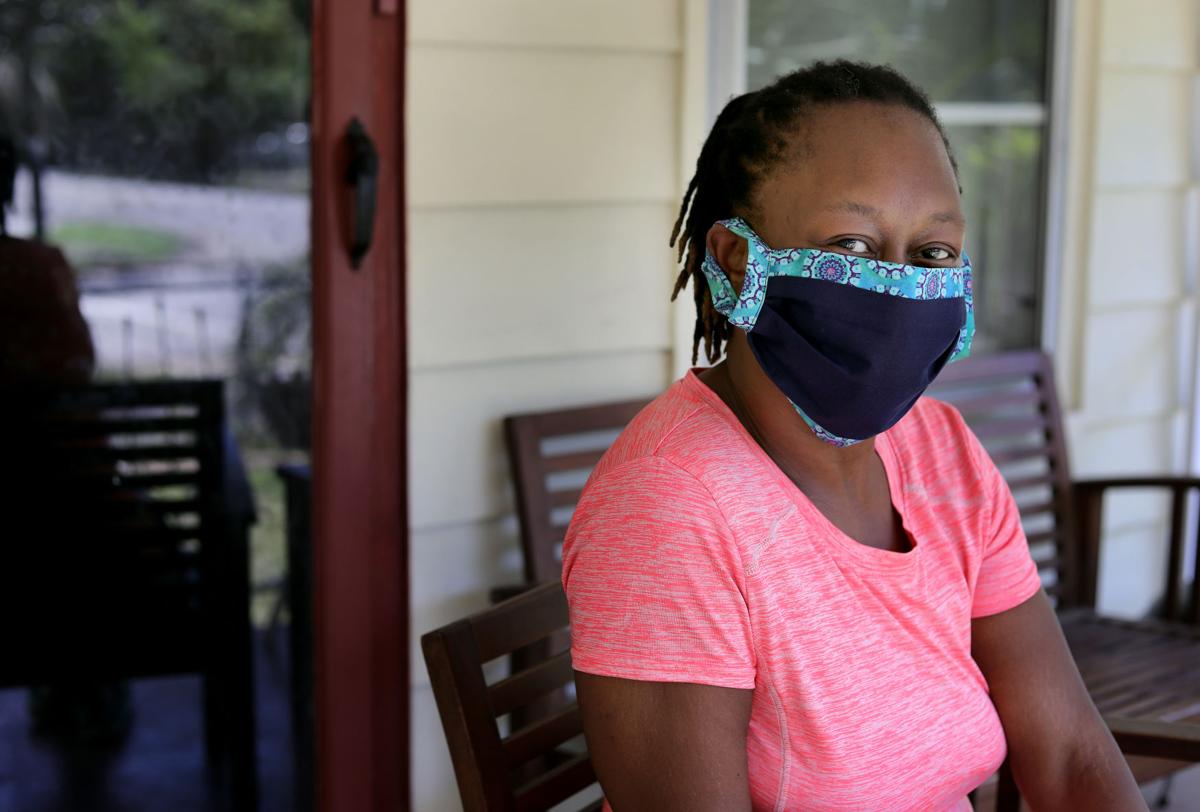 Stephanie Grant makes homemade masks for family and friends at her home in North Charleston Tuesday, April 14, 2020, Grant, who is an essential employee due to her job at a gas station in Mount Pleasant has taken a leave of absence during the pandemic. Grace Beahm Alford/Staff 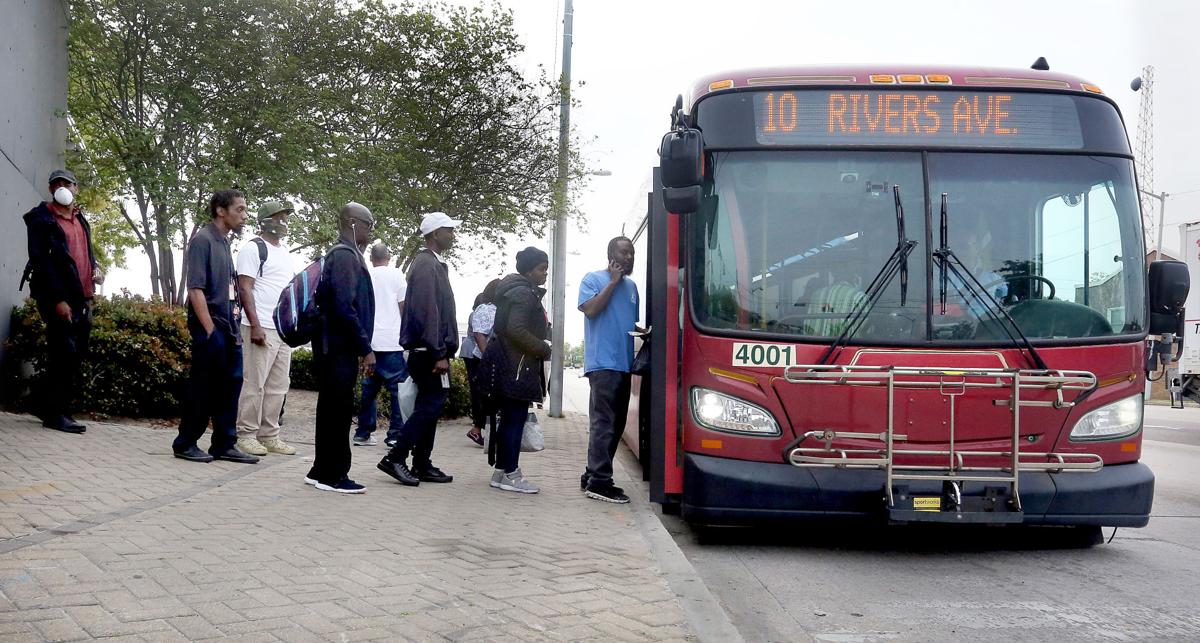 Bus riders board their bus last week at the CARTA station in North Charleston. Black men are especially susceptible to death from COVID-19. Brad Nettles/Staff

African Americans, especially men, are disproportionately contracting and dying of the coronavirus. For many in the black community, that's no surprise.

It's the result of long-term inequalities in the health care system that produced underlying health conditions putting them more at risk, as well as socioeconomic barriers that make them more likely to be in service sector jobs that increase their exposure to the disease.

The numbers are stark: African Americans, who comprise 27 percent of South Carolina's population, make up 41 percent of confirmed cases and 56 percent of deaths, according to data updated Tuesday by the S.C. Department of Health and Environmental Control.

Those who’ve long been on the front lines fighting for marginalized communities expected those numbers.

Given where black people fall in other socioeconomic areas, such as employment and incarceration, it’s a “no brainer” that African Americans would be hit harder by a disease impacting the most vulnerable, said Dot Scott, president of the Charleston Branch NAACP.

Scott said black employees deemed “essential” during the crisis are being exploited for their services. She’s frustrated there are people who make less than $15 an hour, which many have argued should be the federal minimum wage.

North Charleston resident Stephanie Grant works as a cashier at a gas station in Mount Pleasant, a hotspot for COVID-19 cases.

As an employee in regular contact with the public, Grant couldn’t understand why her job didn't provide employees with face masks weeks ago or install a protective shield at the register.

Her anxiety built as she considered the job's risk to her and her family's health. She sent her three children to stay with their grandparents as a precaution.

The more Grant worked, she felt she was on the verge of a nervous breakdown.

“Is this $11-an-hour check worth it?" she remembered asking herself.

Grant’s job allowed her time off to care for her mental health. She hasn’t been to work in over a week and has reached out to her physician about getting medicine.

“It was more important to take leave rather than to be stressed,” she said.

But as she takes shelter from the virus, she's also dealing with a growing economic danger.

Grant plays the organ for an AME church on Wadmalaw Island, so she took a financial hit when the church suspended in-person activities. The North Charleston resident has made more than 100 protective masks and sells the gear to supplement her income.

“God has blessed my hands,” she said. “I keep moving and keep praying.”

Some taking the risk feel their sacrifices are not being acknowledged by local businesses.

He was frustrated recently when a West Ashley gas station closed its restroom and didn’t allow the driver to use the microwave to warm his lunch. While he understood the safety precautions, Speights doesn’t feel businesses show enough respect to those placing themselves in harm’s way to keep the economy afloat.

“We are not essential employees,” he said. “We are expendable employees.”

DHEC has acknowledged the disproportionate effect of the coronavirus on African Americans. Underlying health conditions like diabetes, heart disease, hypertension, obesity and asthma can make it more likely for African Americans to be admitted to the hospital or die from the disease, DHEC officials said.

But underlying health conditions can't be pinpointed as the sole reason for the disproportionate effect on African Americans, said Dr. Jason Cummings, a sociology and African American Studies professor at the University of South Carolina who studies health disparities.

Structural inequalities have also put these communities at a disadvantage in fighting the virus. African American communities are less likely to have insurance and typically have poorer quality health care, which means they may delay seeking medical help.

They're also more likely to be exposed to the virus by living in cities and working in service sector jobs like fast food, big chains and grocery stores.

"Poor people, and people of color, are more likely to be exposed to other people. The idea of social distancing is really a privilege for those who have money and resources," Cummings said.

While African Americans make up 41 percent of the state's confirmed cases, it's unclear who's being tested and who has access to that testing. Research shows that people of color are less likely to be tested, especially those who live in rural areas or work full-time. It's very likely there are more people of color infected by the virus than are being reported.

DHEC doesn't track who is being tested across the state. The agency only collects information on the positive cases, officials said.

For Cummings, the effect the virus has on minority communities is just the latest consequence of inequalities in health care and the workforce.

"We won't learn any lessons if we just use this as a moment," he said. The problem goes much deeper than underlying health conditions, and African Americans have been exposed to the virus far more than other communities. Working from home and avoiding that exposure is a luxury, Cummings said.

There's also a gender paradox in health that explains why men make up fewer confirmed cases but are more likely to die. Women, who more commonly work in service sector jobs and serve as primary caregivers, have a better chance of being exposed to the virus, but they're also more progressive in getting tested and seeking care.

Men are less likely to take medication, get tested, isolate themselves or go to the doctor, research shows.

The state needs to target those communities for testing, Cummings said, and must prioritize dismantling the structural inequalities that have made them more vulnerable — or this crisis will all too easily happen again.

Looking toward a recovery

The coronavirus is also likely to have a greater economic effect on minority and low-wealth communities. Many people in those communities face greater unemployment and are low-wage earners without disposable income, said Omar Muhammad, president of the Lowcountry Alliance for Model Communities.

Minority-owned businesses will be hard hit.

"Their barriers are different than other groups," he said. Many lack reserve funds necessary to keep the business going during the crisis.

His organization is pivoting its micro loans program to help businesses affected by COVID-19.

He hopes that federally funded hospitals will open clinics in these communities to provide more access to health care and testing. Muhammad commended DHEC for reaching out to him and other local leaders about how to best help these communities, but he said the economic recovery should be just as much a focus as the recovery.

"It's really the low-wage workers who are keeping the economy going. We need to acknowledge that these people put their lives on the line," Muhammad said.

CARTA losing riders amid SC's coronavirus outbreak. But many residents still rely on it.

Some worry the recovery won't address the needs of those most affected by the virus and its fallout.

The Rev. Nelson Rivers pastors Charity Missionary Baptist in North Charleston. The church is in Liberty Hill, a predominately black neighborhood that was founded by freed slaves shortly after the Civil War.

The spiritual leader said he was one of those early on who believed the myth suggesting African Americans couldn't contract the virus. He is encouraging faith leaders in the state to designate a "day of healing" when believers could encourage healthy practices.

Rivers, who was serving as the statewide NAACP director when Hurricane Hugo hit in 1989, drew parallels between the current crisis and past disasters.

As much of health care shuts down during coronavirus, SC home health workers continue

Those who pre-qualified for assistance were mostly white, and organizations set up relief stations that were out of reach for many African American communities, Rivers said. Pressure from the national civil rights group and political leaders forced the agencies to be more inclusive.

Rivers sees those same kinds of disparities today. Targeted relief efforts for African Americans should have been underway when it was realized the virus would particularly threaten persons with preexisting conditions, said Rivers, who also serves as vice president of religious affairs and external relations for the National Action Network.

In the recovery phase, the state's political leaders should raise the minimum wage, expand Medicaid and invest in rural healthcare, he said.

As DHEC looks to spread the word to minority communities about healthy practices, the agency recognizes there's a level of mistrust among some African Americans toward public health agencies due to past injustices.

The agency hopes to bridge the gap by working with nonprofit heads, pastors and other trusted community leaders, said Nick Davidson, active director of public health for the agency.