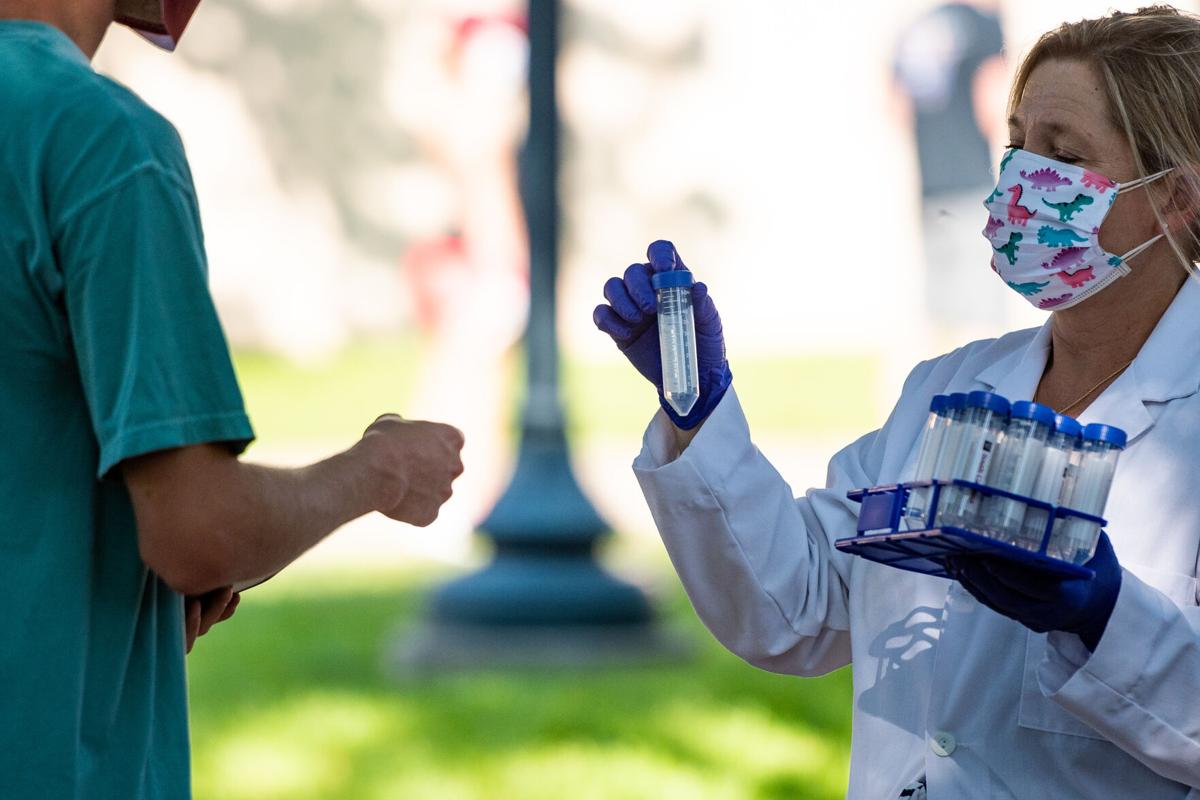 A volunteer hands a University of South Carolina student a vial to collect saliva for a COVID-19 test on Davis Field outside of Thomas Cooper Library. John A. Carlos II/Special to The Post and Courier 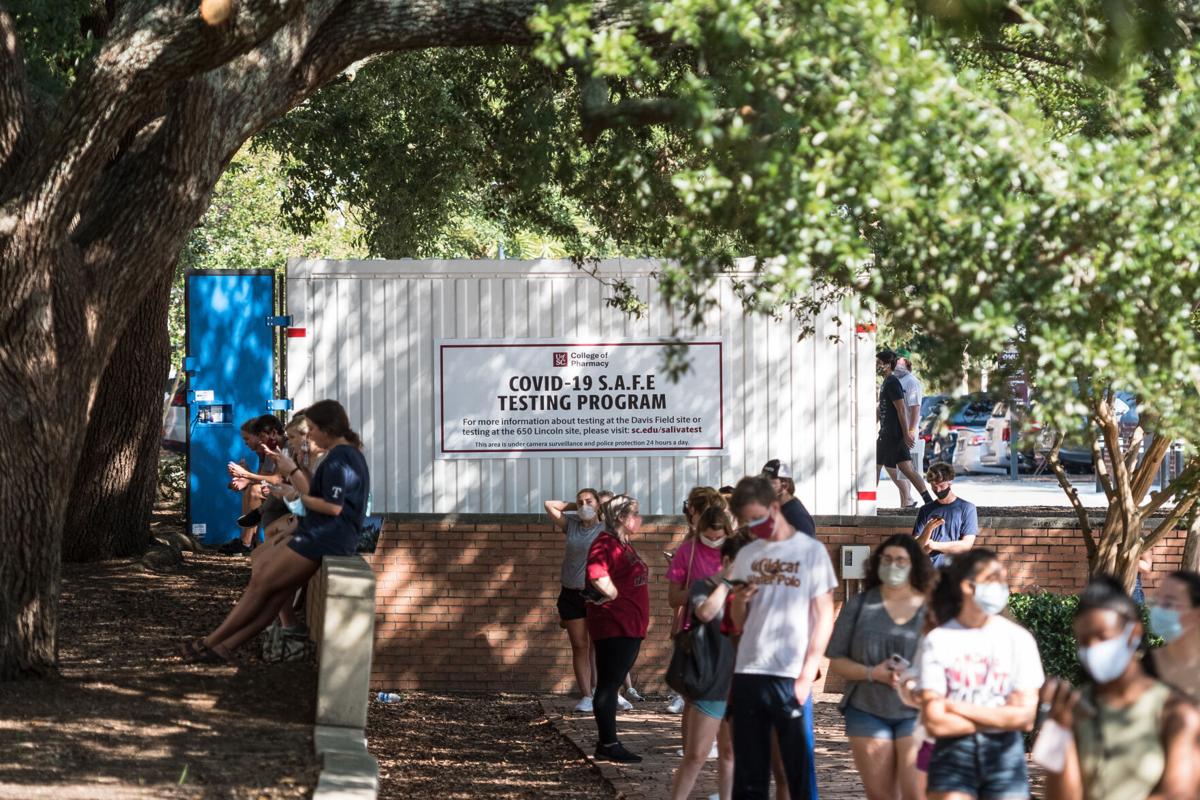 Students at The University of South Carolina line up to take COVID-19 test on Davis Field outside of Thomas Cooper Library on Sept. 2, 2020. John A. Carlos II/Special to The Post and Courier 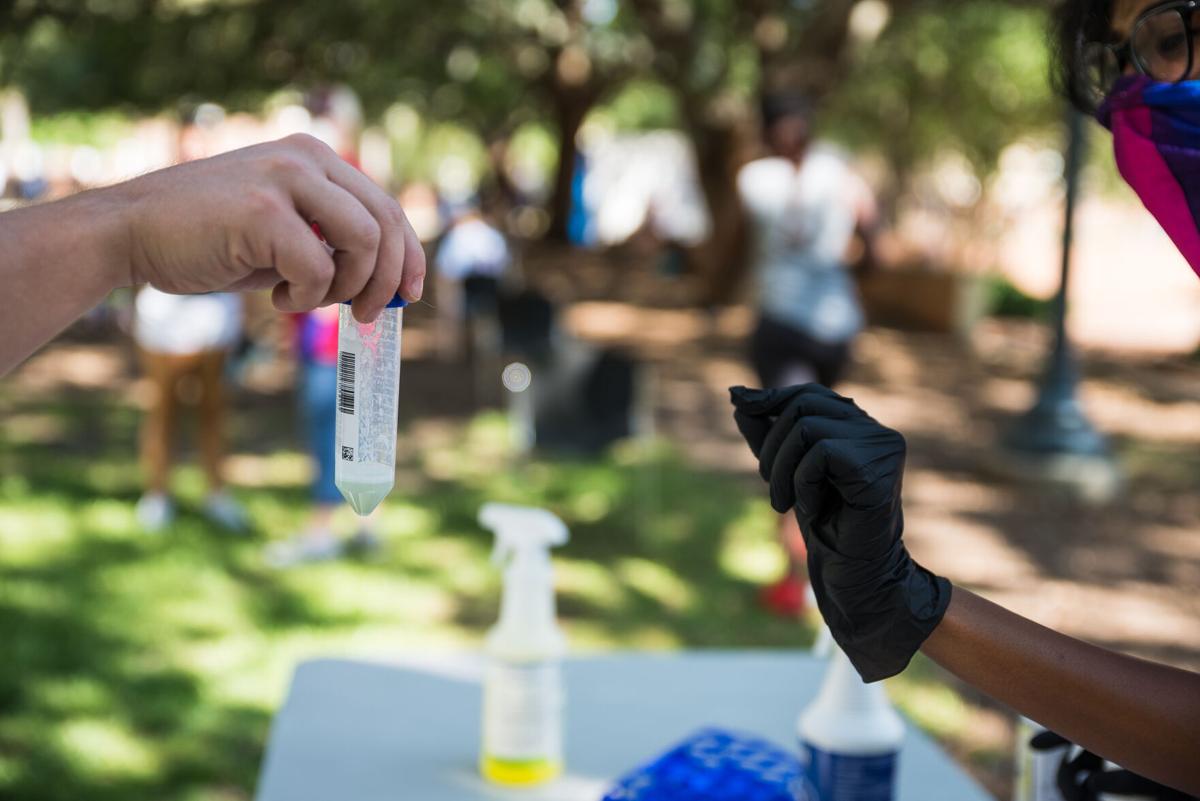 A University of South Carolina student turns in a saliva sample to be tested for the virus that causes COVID-19. USC, which has reported more than 1,700 cases on campus, has a staff of 20 contact tracers to identify people who have been exposed to the virus. John A. Carlos II/Special to The Post and Courier 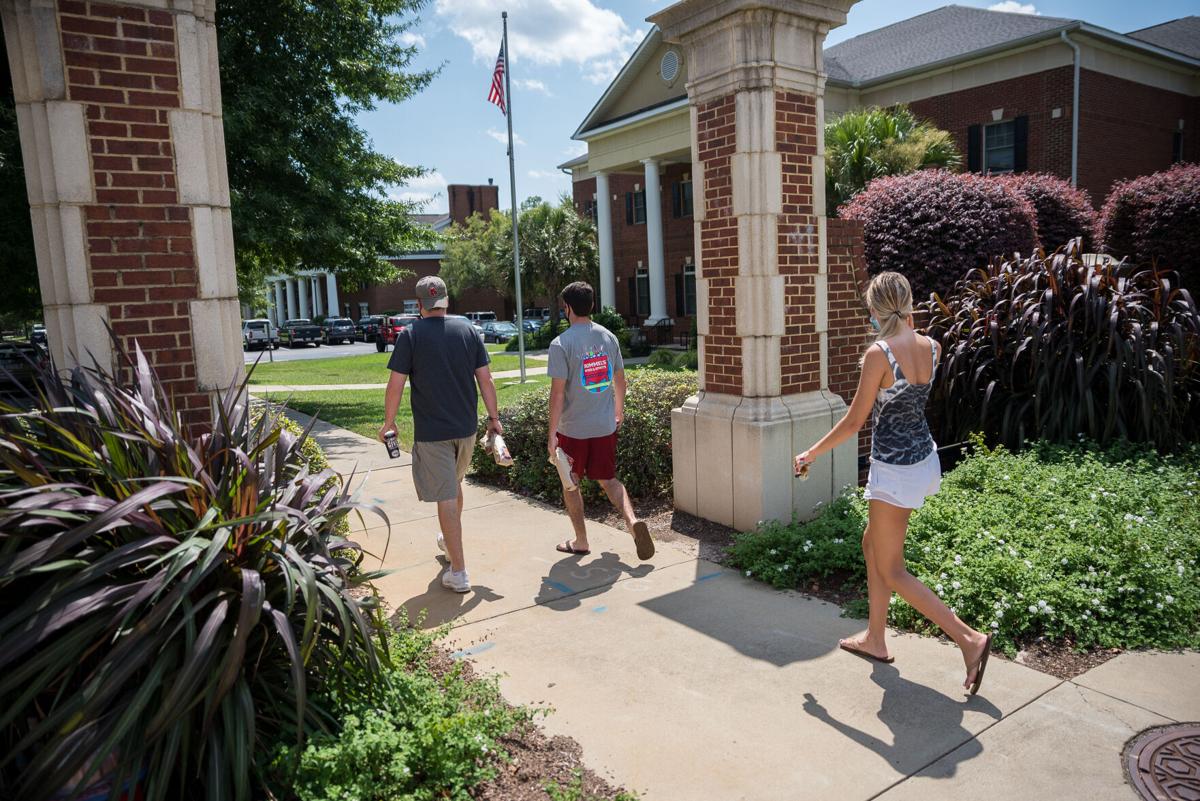 Students walk past the gate entrance to the University of South Carolina’s Greek Village. University officials have quarantined half of the Greek Village's houses due to COVID-19 cases. John A. Carlos II/Special to The Post and Courier 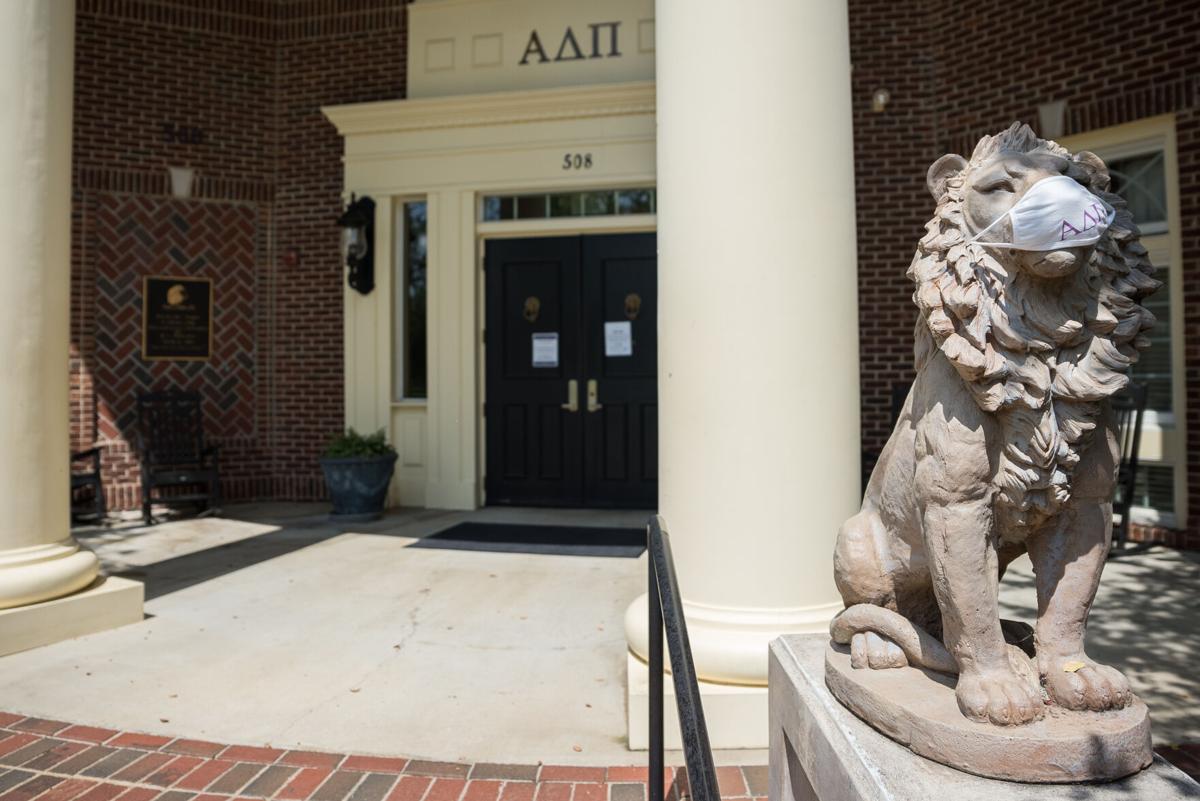 A lion wears a mask outside the Alpha Delta Pi house on The University of South Carolina’s Greek Village on Sept. 2, 2020. John A. Carlos II/Special to The Post and Courier

A volunteer hands a University of South Carolina student a vial to collect saliva for a COVID-19 test on Davis Field outside of Thomas Cooper Library. John A. Carlos II/Special to The Post and Courier

Students at The University of South Carolina line up to take COVID-19 test on Davis Field outside of Thomas Cooper Library on Sept. 2, 2020. John A. Carlos II/Special to The Post and Courier

A lion wears a mask outside the Alpha Delta Pi house on The University of South Carolina’s Greek Village on Sept. 2, 2020. John A. Carlos II/Special to The Post and Courier

South Carolina expects to spend tens of millions of dollars this fall on an army of contact tracers, workers tasked with finding out who might be unknowingly harboring the virus that causes COVID-19.

The state, which typically employs a small staff to investigate disease outbreaks, has marshaled nearly 1,000 contact tracers in its attempt to rein in the coronavirus pandemic. Hundreds more are on standby.

The state Department of Health and Environmental Control says despite the reinforcements, contact tracers face a daunting task: The coronavirus has burrowed deep into South Carolina, reaching nearly every pocket of the state. It’s so prevalent, it’s all but impossible to figure out where most people catch the virus — like trying to determine which sparks from a wildfire further its spread.

If the pandemic is a wildfire burning through South Carolina, the state’s contact tracers are the work crews digging firebreaks, seeking to box in the flames.

On an average day, about 1,000 people around the state learn they’ve been infected with the virus. Contact tracers’ job is to call each one and find out who they’ve been around, then call those people and ask them to stay home. If they succeed, the virus will hit a dead end, unable to infect anyone else.

But no one is required to participate, and many don’t heed the call. Fewer than half of the people DHEC identifies as having been exposed to the virus agree to be monitored by the agency’s staff, according to new figures released this week. From late-June to mid-August, only 37 percent of the nearly 60,000 people possibly exposed to the virus agreed to talk with contact tracers.

Even fewer agreed to be tested for the virus and ultimately tested positive. Only 8 percent were confirmed to be infected, the agency told The Post and Courier.

On the one hand, that’s progress: It suggests thousands of people infected with the virus knew to get tested, even if they didn’t feel sick.

On the other, it shows South Carolina is far from containing the virus. The majority of new infections came from sources unknown to disease investigators, the numbers indicate. The virus is so entrenched it is still moving outside of public health authorities’ view.

“We’re still dealing with something that is widespread in our communities,” said DHEC epidemiologist Dan Drociuk.

Public health experts agree contact tracing should play a key role in the U.S.’s efforts to rein in the virus, even if workers are outmatched by the prevalence of disease.

Consider Wuhan, China, the city where the virus first emerged late last year. After imposing a strict lockdown and other aggressive measures, the government assembled an enormous group of contact tracers to keep COVID-19 outbreaks at bay. Wuhan, which has a population twice the size of South Carolina’s, now has fewer than 100 new cases per day.

Despite the country's lack of transparency with the rest of the world, the central government's response to the virus was "highly effective," according to a study published Aug. 27 in the journal Health Policy and Technology.

Before the pandemic, DHEC says it had just 20 people working on contact tracing to investigate outbreaks of diseases like tuberculosis and hepatitis. That is far below what the National Association of County & City Health Officials said in April should be considered a minimum standard. DHEC's staff was gutted by the last recession and has struggled to return to past staffing levels after accounting for the state’s fast-growing population.

But to keep up with the size of South Carolina’s COVID-19 outbreak, the state would need to have about 2,400 contact tracers investigating cases, according to estimates by George Washington University researchers. The estimate assumes every person infected with the virus exposed four people who contact tracers then need to call, which DHEC says is average.

Candice Chen, a researcher who helped develop the tool, said the high estimate is a signal that South Carolina has more work to do to quell the virus. Even though the number of cases has declined since a spike in July, the disease's activity is still too widespread for contact tracers to bring it to heel.

"Contact tracing is most successful when you have your community spread under control," Chen said.

Even so, the success — or failure — of contact tracing is an important signal of how well contained the outbreak is, researchers say. But most states, including South Carolina, say little about how their efforts are going.

A few states post day-to-day updates on contact tracing, and some name workplaces where multiple cases have been found. DHEC does not. Disease investigators elsewhere have also publicly identified so-called "superspreader events," which are gatherings that give rise to big outbreaks.

A funeral in Albany, Ga., for instance, is thought to have made the city a hot spot for disease this spring. More recently, the Sturgis Motorcycle Rally in South Dakota last month has been linked to more than 250 cases in 11 states, according to The Washington Post. DHEC says it has not uncovered any superspreader events in South Carolina.

The Medical University of South Carolina’s Epidemiology Intelligence Project has used the data on cases and hospitalizations to assess the severity of the outbreak in different parts of the state, grading the COVID situation based on several key aspects. It doesn't give a grade for the state’s contact tracing efforts. The head of the project says DHEC hasn’t published enough information to assess how well it’s doing.

Dr. Cyrus Shahpar, a director at the public health initiative Resolve to Save Lives, says reporting numbers on cases but not contact tracing is like telling the public how big a wildfire is without saying how well contained it is.

By publishing more information, he argues, agencies like DHEC could give the public a more nuanced picture of the situation and how effectively it's managing the pandemic, not just how widespread the virus is.

“To inform your risk, you have a better sense if you know how the response is going,” Shahpar said.

As South Carolina reopens schools for in-person classes and college students return to campuses, other agencies are looking inward, taking contact tracing into their own hands in a bid to keep COVID-19 out of the workforce.

School nurses are being asked to help identify people who have been around students and teachers who fall ill, giving contact tracers an on-the-ground assist. Clemson University is testing an MUSC-designed smartphone app that can alert people if they’ve been near someone who later tests positive.

The S.C. Department of Corrections has about 10 workers tracking down cases inside the prisons and among staff, using an app the agency developed just for the occasion. And the University of South Carolina has hired its own staff of about 20 contact tracers.

USC, which has had more than 1,700 cases since the beginning of August, has set aside space for students to quarantine if they’re exposed. The university says it’s usually able to interview infected students within eight hours of getting their results.

Its investigations led to half of the houses in its Greek Village being quarantined and revealed that most cases are coming from groups of students “socializing off-campus,” said Dr. Deborah Beck, director of USC Student Health services.

Consistent messaging has been effective, she said. Scheurer believes staff have become more aware of even mild symptoms that could be COVID-19's subtle flags. Of the staff who have fallen ill, the MUSC team has only found evidence that 6 percent contracted the disease at work, mostly from colleagues.

Scheurer said the hospital is using internal medical records to let anyone with even a remote possibility of exposure know of the risks.

"We took the stance of over-notifying," Scheurer said.

It's better to be overly careful, she said, because even disease investigators can't be positive who the virus has touched or where it's headed next.