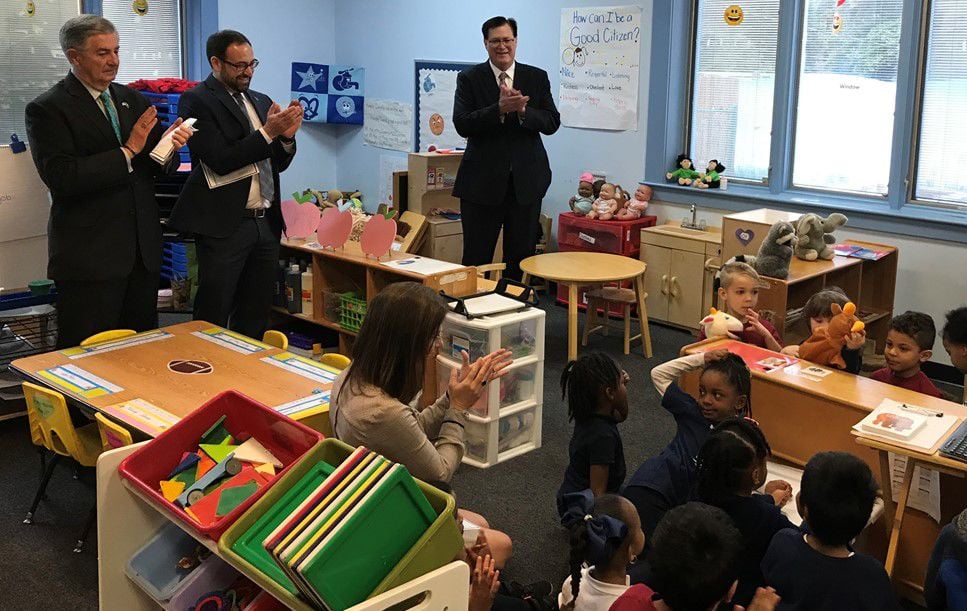 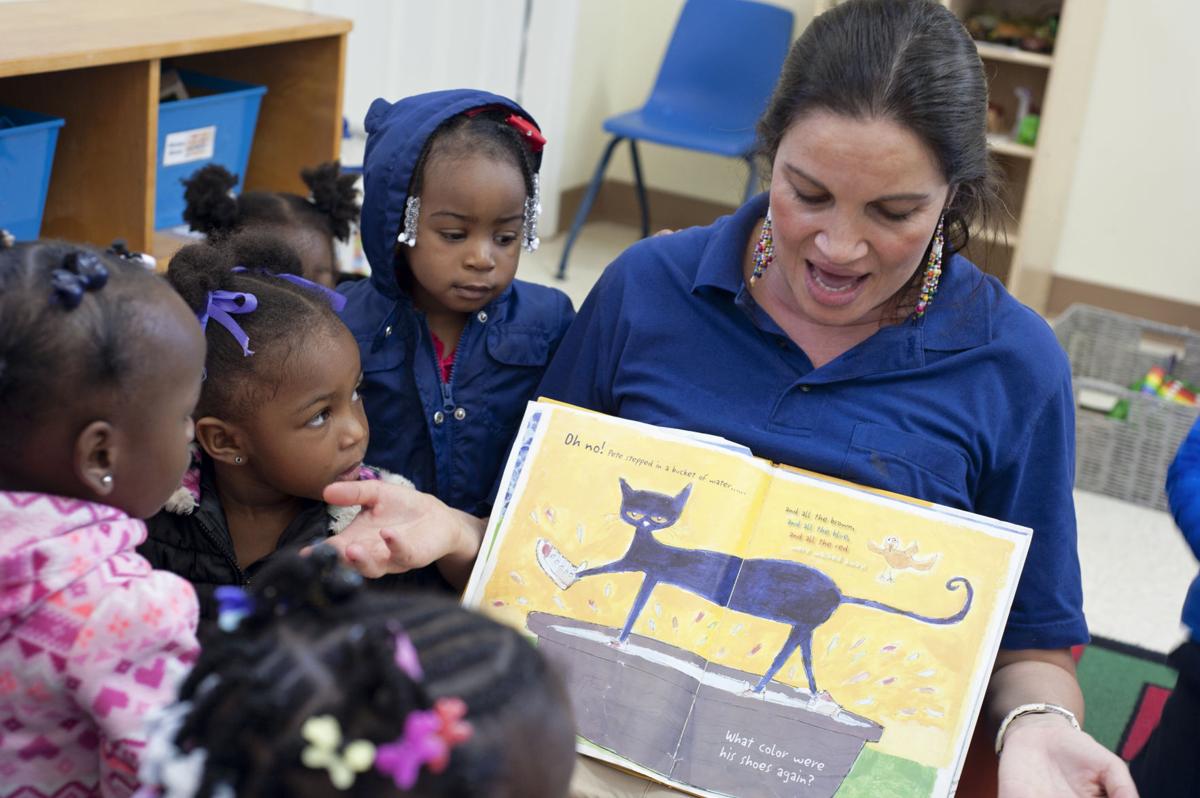 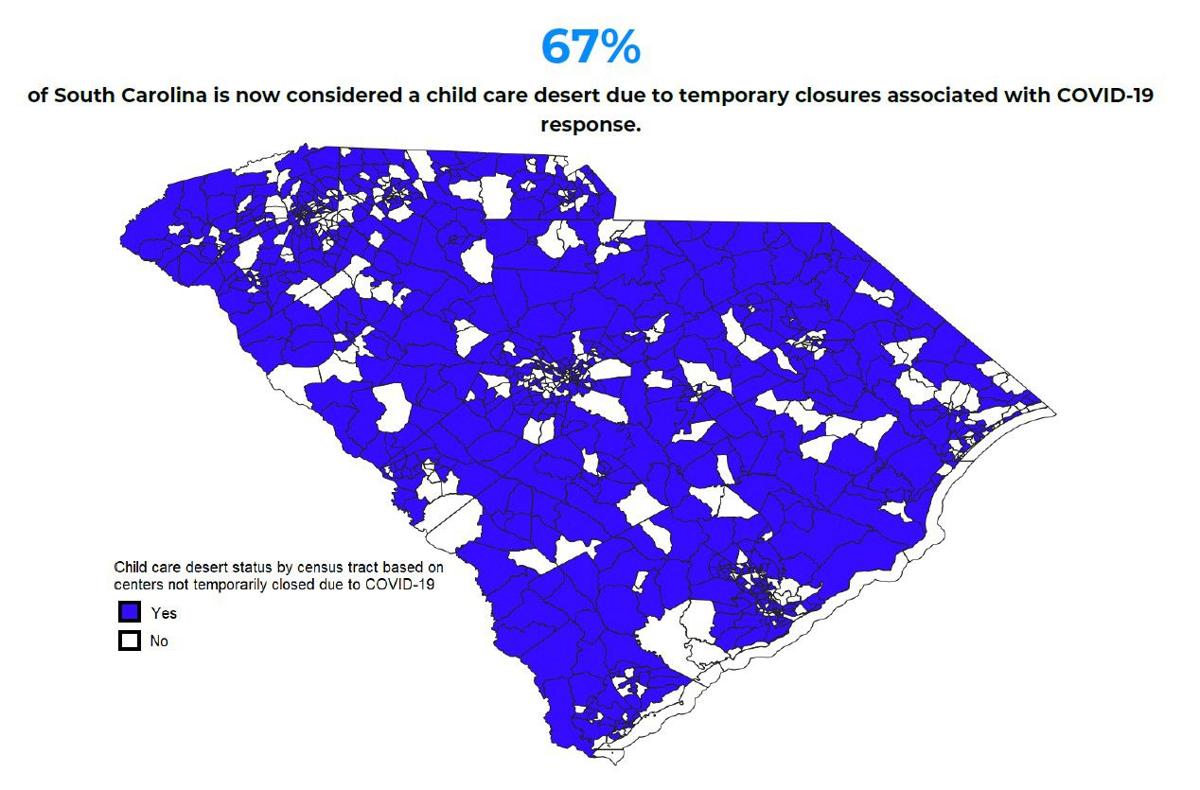 This shows how much of South Carolina was considered a "child care desert" on May 28, 2020. That's defined as any census tract with more than 50 children under age 5 that contains either no licensed child care providers or so few options that there are more than three times as many children as licensed slots. Provided by First Steps 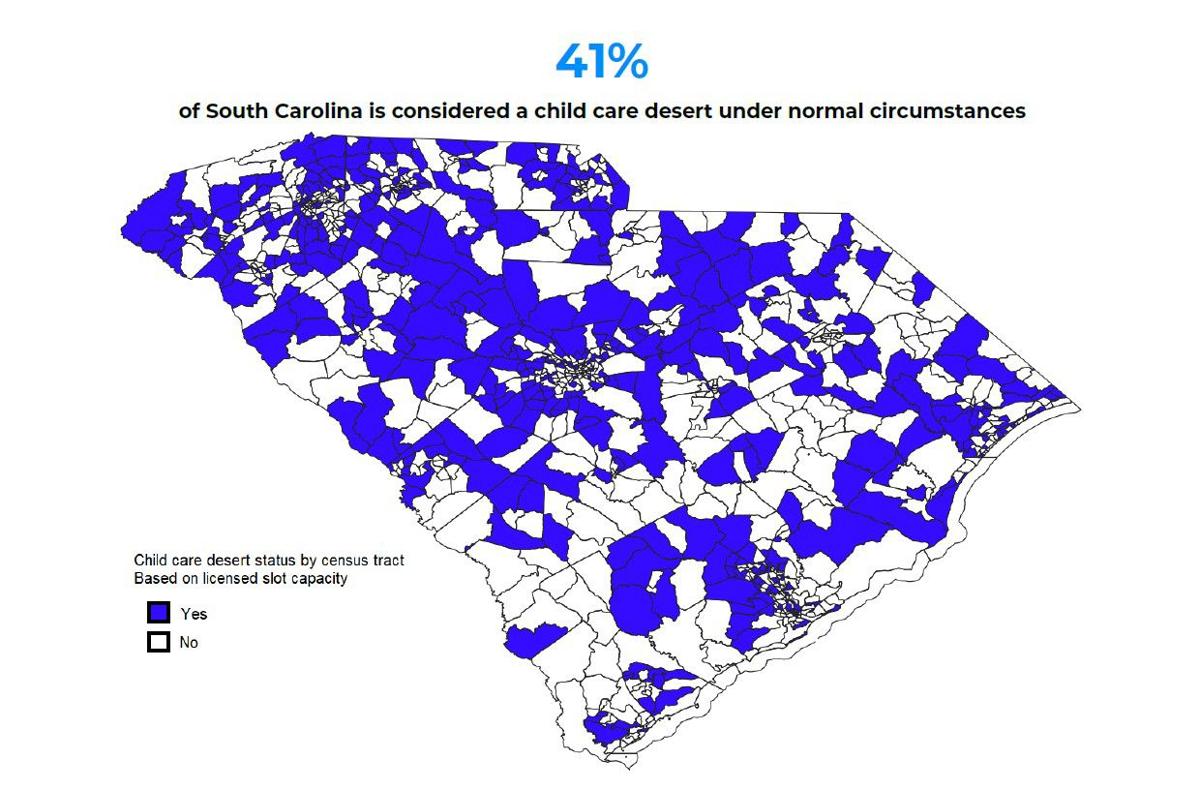 This shows what parts of South Carolina were considered a "child care desert" even before the pandemic resulted in child care centers voluntarily closing. A "child care desert" is defined as any census tract with more than 50 children under age 5 with either no child care provider or so few options that there are more than three times as many children as licensed slots. Provided by First Steps

This shows what parts of South Carolina were considered a "child care desert" even before the pandemic resulted in child care centers voluntarily closing. A "child care desert" is defined as any census tract with more than 50 children under age 5 with either no child care provider or so few options that there are more than three times as many children as licensed slots. Provided by First Steps

COLUMBIA — Even before the pandemic, South Carolina had a child care problem, with 40 percent of the state offering parents none-to-few licensed options.

By late May, those "child care deserts" blanketed two-thirds of South Carolina due to closures amid the COVID-19 outbreak.

Gov. Henry McMaster never required day cares to shutter, but roughly half did so on their own due to a combination of losing paying parents who, either newly jobless or allowed to work remotely, kept their kids home with them and concerns about disease spread.

With the economy reopening, so are child care centers. But they're struggling to stay open. Some owners have decided to close their doors for good.

"If we want to fully reopen, we have to solve the child care problem. The school system is not going to solve that for us," said Ted Pitts, CEO of the state Chamber of Commerce.

State and federal grants are helping many day cares stay afloat. Some businesses have become creative. And First Steps, the state's early childhood agency, is asking legislators to provide at least $4 million in federal coronavirus aid so access doesn't worsen in the coming school year.

Child care is in a Catch-22 situation.

To reopen, businesses need their employees to return to work. But they can't if there's no one to watch their children. Caught in the middle are child care centers, who need paying parents and, in some cases, employees willing to return.

When the pandemic started, Shirley Ellison said her staff of five, including her two daughters, cared for about 25 children daily at her Training the Children Christian Center in Lexington. But after businesses and schools closed in mid-March, the number of children dropped, nearly overnight, to seven.

"We just decided to close," she said.

In April, after she got a call from a parent who had to go back to work, she attempted to reopen. But other than her daughters, employees didn't want to come back.

She called parents last week to let them know she's not reopening. After 43 years of keeping children, she's retiring.

"I haven’t cried yet," she told The Post and Courier. "I believe I have fulfilled what I wanted and what God wanted me to do, put lovin' into kids’ hearts and minds."

Her center is among more than 1,000 statewide that remain closed over a month after McMaster began rolling back mandatory business closures.

Parent Tom Lacas was thrilled his children's day care reopened on Monday. A small business owner, he dealt with the lack of child care both personally and professionally.

Since his wife is a pharmacist and had to keep working 12-hour shifts, he was running his web development business from his Chapin home while watching a 2-, 5-, and 8-year-old and helping his oldest with school work. Five of his seven employees also worked with kids at home.

"For a kid to randomly come in crying during a Zoom meeting has become somewhat acceptable," Lacas said. "Productivity definitely goes down because there's no way you're going to get an hour or two of uninterrupted time when you're watching three kids. It's downright near impossible."

How government is helping

Carolyn Watt managed to keep Small World in Easley open, though on some days, as few as two children arrived, down from the normal 50 to 60. She had to lay off staff for several weeks and, in mid-April, sent a letter to parents saying she'd have to close if children didn't return. Many did, though 20 still haven't.

If not for the $40,000 forgivable loan she secured through the federal Paycheck Protection Program, "I don’t know where I’d be right now," she said.

But staying open was a must.

"We have a lot of pharmacy and nurse parents and other essential workers who needed child care, and some new to the area who didn’t have families they could depend on," said Morris, who runs New Beginnings at Warth Child Care, which her "granny" opened in 1953.

Money from First Steps "kept our doors open" until she, too, secured a federal PPP loan last month for $79,000.

"Even parents who were coming really didn’t have the money. They weren’t paying on time. It was hard for them because of everything else going on," Morris said. "But we still had the same bills."

Recognizing the essential role of day cares, and their precarious situation, First Steps decided to keep making payments for 4-year-olds enrolled in pre-K programs, even though day cares' preschool programs, like schools statewide, had to close.

"We made a conscience decision to continue paying those child care centers as if they had those kids there," said First Steps director Georgia Mjartan.

At New Beginnings, that supplied $1,125 a week for nine children who'd stopped coming. Statewide, First Steps provided $4.1 million to centers for preschool programs required to stop. The agency is asking the Legislature to reimburse that money from the $1.9 billion South Carolina received from the federal CARES Act specifically to reimburse state and local governments for COVID-19-related expenses.

Otherwise, the agency may have to limit access to 4K programs in the coming school year, when the agency expects more parents than ever to want to enroll their children, Mjartan said.

If that money isn't replaced, First Steps will be able to pay for only 2,100 4K slots, down from 2,700 this school year. Job losses mean more parents will likely qualify for the program. And because of social distancing concerns and the need for more space in public schools, their 4K programs may be more limited, she said.

Also aiding child care centers, including New Beginnings — where daily attendance has climbed back to about 75 — are vouchers provided through the state Department of Social Services, which cover child care costs for eligible parents.

The federal CARES Act sent that agency $63 million for three programs assisting child care centers and workers who had to keep working amid the shutdowns, such as health care providers and first responders, who newly qualified for the state's previously very limited voucher program.

So many parents applied, DSS had to close the application process more than a month ago. More than 4,700 have been approved, covering $22.5 million worth of child care for essential workers through Aug. 30. The agency is still reviewing more than 2,000 applications.

Morris said she called every parent she thought could qualify and said, "Let's fill this out together."

DSS is also providing $300 to $600 to centers to help buy cleaning supplies, tallying $1.3 million so far. And on May 20, it began offering grants between $5,000 and $15,000 to pay operating expenses, depending on a center's size, to help reopen or cover revenue lost to low enrollment. About 1,400 centers have applied, according to the agency.

The $63 million is disappearing quickly, and "it's not enough," said DSS Director Michael Leach. "The child care system across the country and in South Carolina was already a fragile ecosystem. They were already operating on razor-thin margins. We already had child care deserts. COVID-19 has put a lot of stress on the child care system. The problem with that is that’s the foundation to the state’s ability to recover."

When schools closed in mid-March, Nephron Pharmaceuticals in West Columbia created its own day camp for kids to ensure workers could stay on the job.

"Many of them came to me at the beginning and said, 'We have no option here, no option, we can’t come,'" said Lou Kennedy, Nephron's president and CEO.

So she turned a space normally used for employee training into a day care for employees' children up to age 11, though no infants, staffed by teachers the company already employs on a part-time basis and offered at no cost to her workers. Three teachers are always there, even though no more than nine kids have attended on a single day, Kennedy said.

Before the school year ended, the teachers helped students complete their e-learning assignments, while mom or dad came downstairs on their lunch break to eat with their children.

"It worked out fantastically," Kennedy said. "We made sure we ordered things like hula hoops and fun stuff for kids to do, crafts and healthy snacks. ... It's heartwarming."

She plans to continue the program through at least the summer, as many employees' child care centers haven't reopened, and even summer day camps, such as weeklong programs offered by churches, won't meet the need every day.

She encourages other businesses to try something similar. Some have sought her advice.

"I’ve had them approach me, call me, email me and say, 'Exactly how did you do this and what did you do?'" Kennedy said.

A spokeswoman for DSS, which licenses child care centers, notes even temporary arrangements must be approved by the agency.