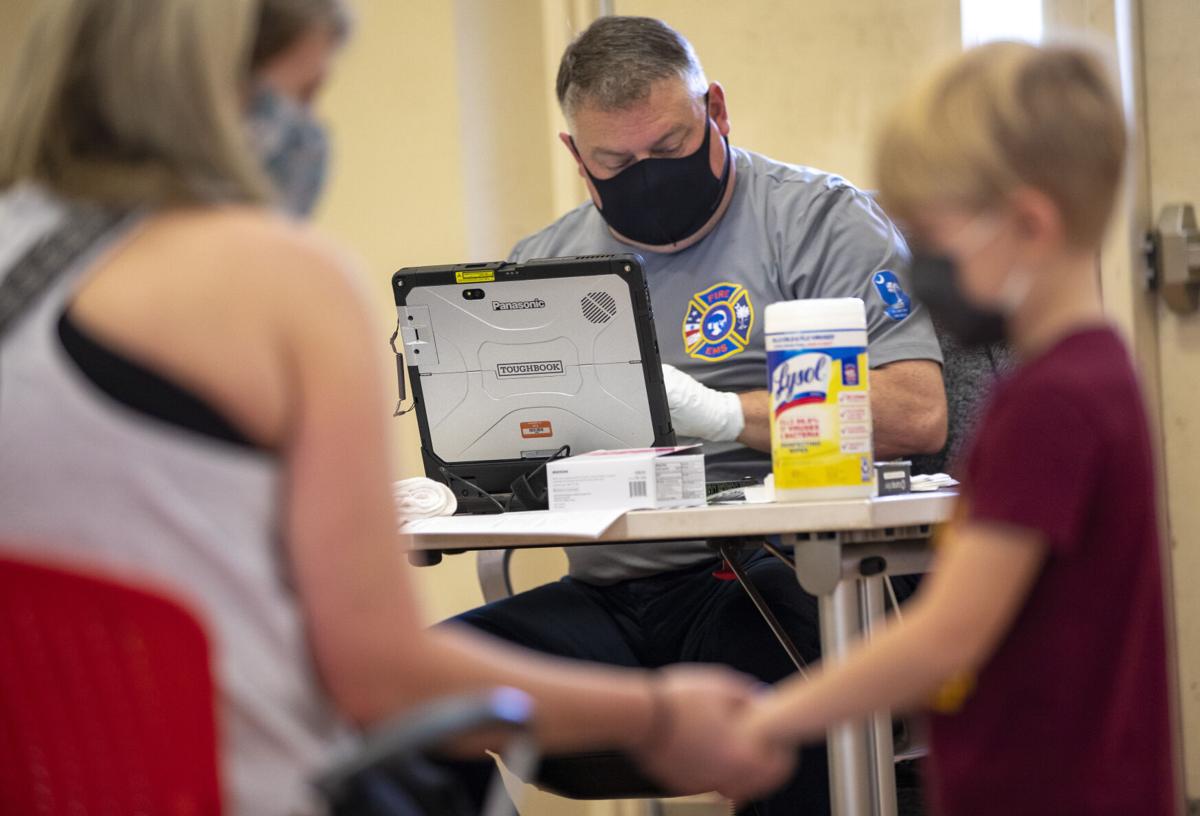 Hanahan fire chief Bo Bowers along with many others with the department distribute COVID-19 vaccines during a vaccination clinic at the gymnasium behind Hanahan City Hall on April 17, 2021. Andrew J. Whitaker/Staff 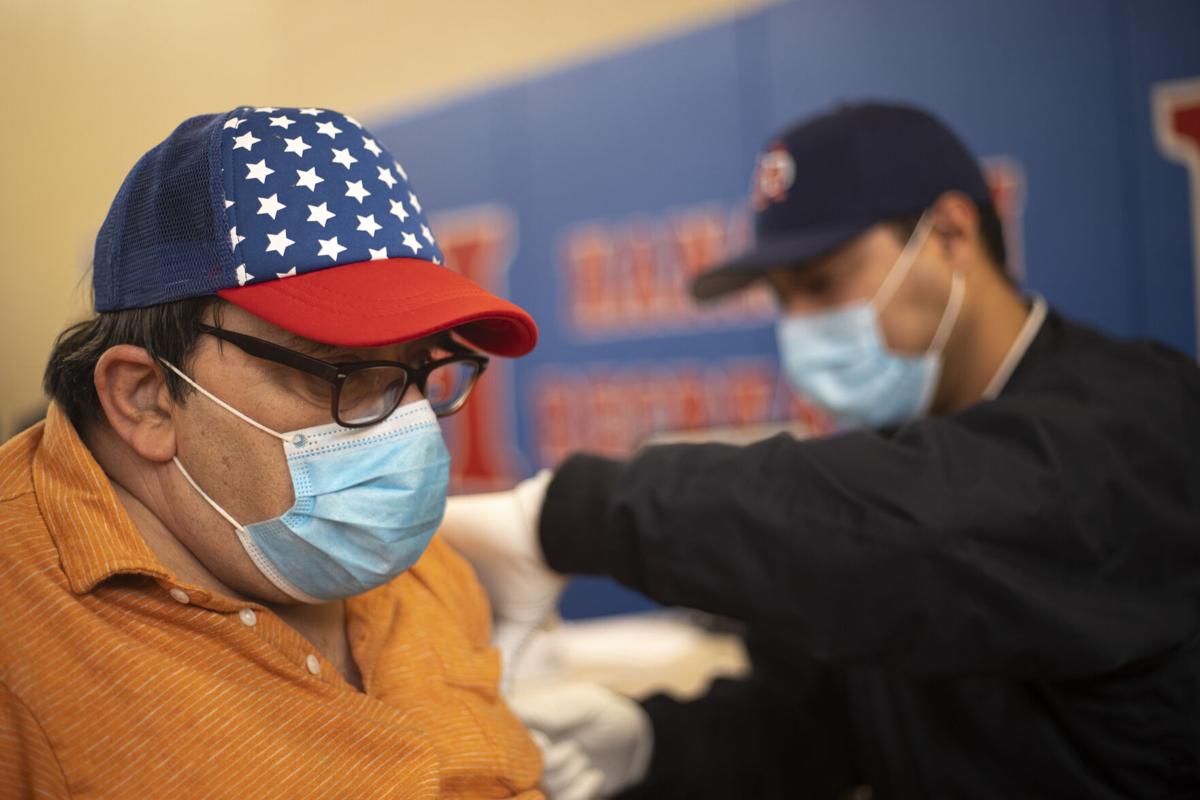 Lawrence Sturbaum receives his COVID-19 vaccine from Raymond Varner with the Hanahan Fire department during a vaccination clinic at the gymnasium behind Hanahan City Hall on April 17, 2021. Andrew J. Whitaker/Staff 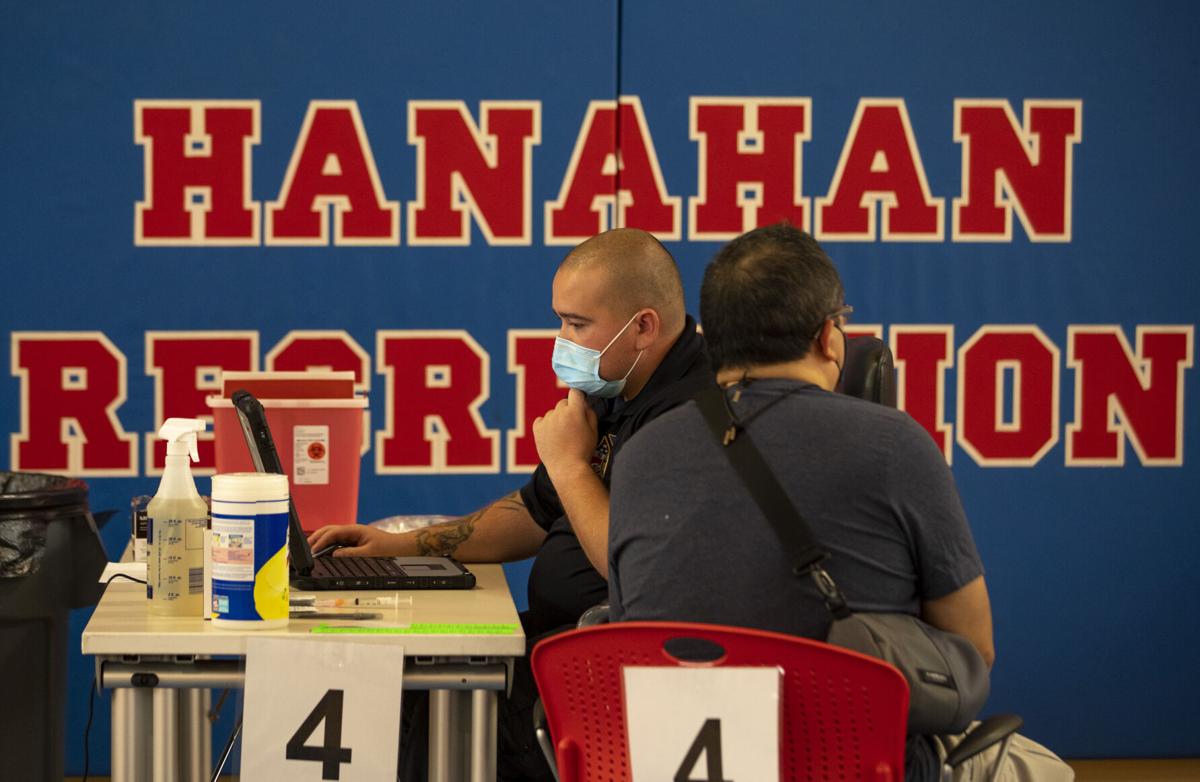 Bryan Wooten with the Hanahan Fire Department gives out COVID-19 vaccines during a vaccination clinic at the gymnasium behind Hanahan City Hall on April 17, 2021. Andrew J. Whitaker/Staff

Hanahan fire chief Bo Bowers along with many others with the department distribute COVID-19 vaccines during a vaccination clinic at the gymnasium behind Hanahan City Hall on April 17, 2021. Andrew J. Whitaker/Staff

Lawrence Sturbaum receives his COVID-19 vaccine from Raymond Varner with the Hanahan Fire department during a vaccination clinic at the gymnasium behind Hanahan City Hall on April 17, 2021. Andrew J. Whitaker/Staff

It's becoming clear that reaching herd immunity through vaccines won't happen any time soon — if at all — as South Carolina's public health leaders are beginning to say it might not be possible to convince everyone they should get a shot.

Only about 2 percent of the state's adult population is becoming fully vaccinated against COVID-19 each week. At the current pace, it would take at least another five months to get 70 percent of people inoculated.

The S.C. Department of Health and Environmental Control says it is working to understand what vaccine skeptics have in common, and is tuning its messages about vaccines to certain communities to correct some of the disparities that have shown themselves in the rollout so far. But that doesn't change the fact that more than 230,000 eligible South Carolinians are still missing even their first dose of the vaccine.

Across South Carolina, providers are reporting low traffic. A mass vaccination site at the Columbia Place Mall that gets a special allocation from the federal government, for example, could be giving 1,000 doses every day. Instead, it's averaging 315.

And with six weeks having passed since eligibility opened to every adult in the state, complaints that the vaccine isn't accessible enough for the public are beginning to ring hollow.

With COVID-19 infections, 65% in SC may be immune, MUSC research says

It isn't all bad news: Three-quarters of South Carolina's seniors, the group at highest risk for hospitalization and death from COVID-19, have received at least one dose of the vaccine. Cases of COVID-19 are in a plateau — though a fairly elevated one — and the number of reported deaths is falling.

But the threat of variants that could spread rapidly in the unvaccinated population and give South Carolina another surge looms large.

"It may very well be that we will not eliminate this virus. But that's not a reason not to get vaccinated," said Dr. Jane Kelly, assistant state epidemiologist at DHEC. "If not enough people are vaccinated, then this virus has a huge pool of susceptible people to infect and continue to mutate. This is a setup for variants to emerge against which vaccines won't work."

Faced with a trickle in demand compared with the surge seen before, providers are beginning to shift their strategies.

Roper St. Francis decided to close its mass vaccine site at the North Charleston Coliseum & Performing Arts Center and shift its supply of the Pfizer vaccine across its five urgent care sites. Dr. Robert Oliverio, one of the health system's chief medical officers, said it became clear any hope of reaching herd immunity can't hang on a centralized effort.

"We've done what we can with the drive-thru concept," Oliverio said. "We're not going to get to 70 percent doing the same thing that we've been doing all along."

A low rate in the Lowcountry

Much of the talk about vaccine access revolves around getting doses to the remotest parts of the state, which might lack hospitals and pharmacies.

The fact is, however, that the majority of South Carolina's unvaccinated population doesn't live in a rural area, and less populated places in South Carolina don't always have lower vaccination rates compared to dense ones, a Post and Courier analysis found.

Berkeley County is an example.

Next door, Charleston and Georgetown counties have rates among the top three counties in the state, according to data from the S.C. Department of Health and Environmental Control. Berkeley County's rate is middling.

"We continue to push public education and are working with all of our partners to provide as many vaccine events as possible, but until the vaccines can be made conveniently available for everyone, we likely won't see much change," he said in a statement.

Yet dozens of vaccine locations have been open in Berkeley County for weeks, at local pharmacies, grocery stores, pop-up clinics and primary care offices.

Greg Habib, the mayor of Goose Creek, said even so, vaccines haven't been consistently available in some parts of the county, particularly its more sparsely populated areas.

Now, Habib said skepticism is an issue, noting it is unfortunate the vaccine's roll-out has "become political."

“Anyone who folks respect need to be seen getting the vaccine. I think that will encourage some folks to get the vaccine," he said.

But the harder the government tries to force vaccines onto people, the more resistant they might be, Christie Rainwater, the mayor of Hanahan, said. Rainwater, who has taken the vaccine and experienced side effects, said she doesn't feel authorities should be pushing people on their personal health choices.

"Does everyone need to get vaccinated? I feel like everyone is so concerned about getting the vaccine, the truth is that our goal is not to get everyone the vaccine. It’s to save lives, and somewhere along this journey we’ve lost track of that," she said. "If we are there already, why are we pressuring people to get the vaccine?"

President Joe Biden set a goal of getting one dose into 70 percent of Americans by July 4. South Carolina would have to more than double its current pace to do that.

"We're going to have to bring the vaccine to people who are less eager," Biden said in a briefing with reporters May 4. He also acknowledged "we're going to be vaccinating into next fall."

Polls start to paint a picture of what people who won't get a shot have in common. Nearly half of White evangelicals say they will not, according to a Pew Research Center poll, for example.

A canvassing event in Mullins meant to get people signed up for a shot instead encountered nine in 10 people saying they wouldn't get a vaccine, Suzette McClellan, a DHEC director in the Pee Dee region, said during an April 27 panel on improving access. People were afraid of needles, side effects and dying. Some felt vaccines were a government plot, McClellan said.

"In the process they found out that people had all these fears about actually getting vaccinated," she said.

An analysis of data from DHEC and population estimates from the U.S. Census Bureau suggests young Black men are likely the demographic group with the lowest uptake of the vaccine. Less than 10 percent of men under age 34 have gotten a shot in South Carolina.

Young people overall stand out as least likely to get a vaccine so far.

Though they account for 32 percent of the population, people under 35 make up just 15 percent of the doses given out. That is despite the fact that they make up the vast majority of infections reported to DHEC in recent months.

Dr. Ruth Adekunle, an infectious disease physician with the Medical University of South Carolina, said face-to-face conversations with people about the safety and efficacy of the vaccine may be the best way to convince skeptics. The most fruitful of those conversations she has had are usually with patients who share her demographics, she said.

"It's sometimes easier to hear a message from somebody who looks like you," Adekunle said.

The question remains how to multiply those efforts — and how to do it quickly.